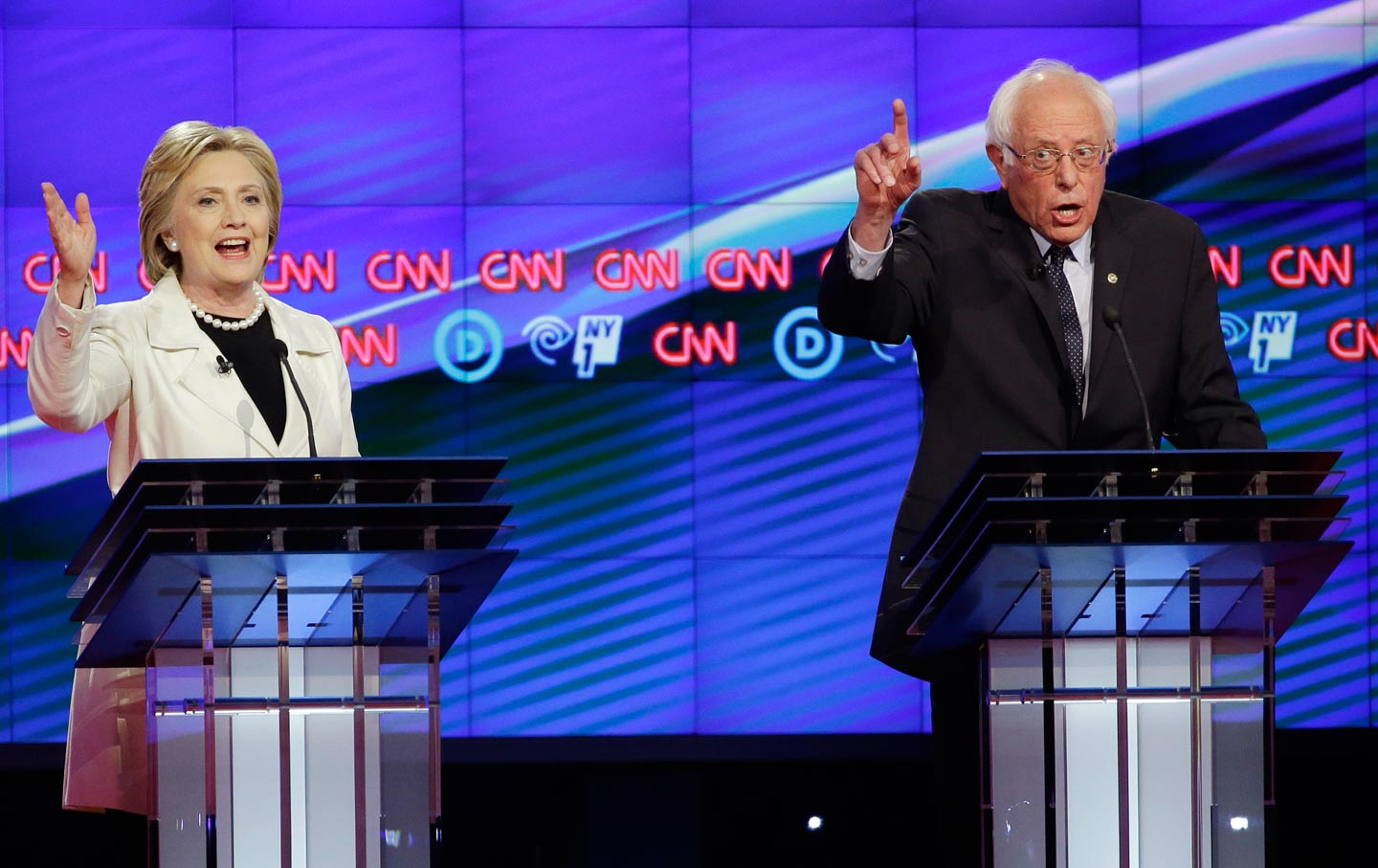 Brooklyn—Nobody dropped the mic. But in this, their final scheduled debate, both Democratic candidates revealed essential elements about their characters, their campaigns, and the causes they really care about.

Hillary Clinton showed, as she has in every previous debate, that she really does know how to play this game. On everything from whether she’ll ever release those transcripts to whether she now thinks her husband’s 1994 crime bill was a mistake, Clinton ducked questions like the seasoned pol she is, deftly turning the transcript query into a quest for Sanders’s tax returns, dodging responsibility for the crime bill by pointing out that Sanders voted for it, and doing her level best to saddle Sanders with the Sandy Hook shootings by depicting him as a “reliable supporter of the NRA.”

It might have been cynical, but in New York—a state neither candidate can afford to lose, and where most of the Democratic voters live in cities—it may also prove effective. When Clinton said, “We hear a lot from Senator Sanders about the greed and recklessness of Wall Street, and I agree. We have to hold Wall Street accountable. What about the greed and recklessness of gun manufacturers and dealers in America?,” the New York audience erupted in cheers. But then there aren’t a lot of hunters in Brooklyn.

Bernie Sanders Is Doing Something More Than Just Running for President

The room cheered even louder when Clinton called out the moderators of this and all the preceding Democratic debates for never once asking about abortion: “We’ve not had one question about a woman’s right to make her own decisions about reproductive health care, not one question,” she said. “We have a presidential candidate by the name of Donald Trump saying that women should be punished and we are never asked about this.” Sure, it got her out of the hole she was digging on the Social Security cap—where she actually flip-flopped live on camera—but her anger here was obviously genuine, as was the crowd’s response.

Sanders, on the other hand, was still far too prone to lapse into excerpts from his stump speech, still fuzzy on the attack, and still either unwilling or unable to counter Clinton’s ultimate defense: Obama, Obama, Obama, Obama. Time and again Clinton turned a tricky question—CNN’s panel tonight were the sharpest I’ve seen in any debate by either party—into a referendum on a third Obama term.

Yet this was also Sanders’s best performance by far, partly because he’s raised his game. When Clinton claimed, as she always does, that she “called out” the big banks, Sanders replied with sarcasm that actually stung: “Secretary Clinton called them out, my goodness—they must have been really crushed by this. And was this before or after you received huge sums of money by giving speaking engagements?”

But mainly because Sanders showed, again and again, that he really is a different kind of politician waging a different kind of campaign. When Clinton, predictably, asked about Sanders’s tax returns, and the panel, quite properly, followed up, Sanders said he’d release his 2014 return “tomorrow.” No equivocation. When asked why he’d criticized Clinton for referring to black youths as “super-predators” Sanders replied with devastating candor: “Because it was a racist term. And everybody knew it was a racist term.”

Most astonishingly—at least to me, perhaps because I’ve been following New York politicians for 30 years—when Wolf Blitzer “went there” on Israel, and asked Sanders whether he stood by his comment that Israel’s response to attacks in the 2014 Gaza war had been “disproportionate,” Sanders actually doubled down, saying that the number of civilian deaths indicated the response was indeed disproportionate, adding, “If we are ever going to bring peace to that region…we are going to have to treat the Palestinian people with respect and dignity,” and that “there comes a time when you have to say that Netanyahu isn’t right all of the time.” Which won’t win him any votes in Borough Park. Here, again, Clinton repeatedly dodged the question.

Will any of this make a difference on Tuesday? As always, Clinton was far more attentive to local constituencies and local mores than Sanders, who spent more debate time talking about the issues behind the Verizon strike than anything aimed exclusively at the five boroughs. By all the rules of conventional politics, Clinton will retain her big lead in the polls and roll over Sanders.

But by those same rules, the Sanders campaign should never have gotten farther than New Hampshire. Yet here he is, a 74-year-old Jewish socialist who won’t pander—even on Israel, even in Brooklyn—and who says that the incremental approach espoused by every Democratic president since Franklin Roosevelt just isn’t good enough, that the system is really broken. And somehow, so far, he’s still in the race.