On Monday, April 30, the White House made a startling assertion. “Iran has a robust, clandestine nuclear weapons program that it has tried and failed to hide from the world and from its own people,” read an official statement from press secretary Sarah Huckabee Sanders. Well, this was news! Has Iran been secretly developing nuclear weapons in defiance of the 2015 international deal? Does this mean we should go to DEFCON 4, as new national-security adviser John Bolton has long pined for? At the least, President Trump would now seem justified in ditching the deal, which is exactly what he announced he’d do on Tuesday, just over a week later.

Oops. The first “has” in the quote above should have been a “had”—as in Iran had a robust, clandestine nuclear-weapons program, etc. Of course, it had—that’s why the US and other world powers hammered out the deal with Iran in the first place. And, according to Trump’s own State Department, Iran has been in compliance.

Facing feedback of “WTF?!”, the White House changed “has” to “had” in its online statement a few hours later, but without acknowledging the correction or e-mailing reporters who had received the original statement. At first, a National Security Council spokesman blamed the present-tense verb on a “clerical error” (can you imagine the US response if Iran’s clerics had similarly erred?). At the next day’s press briefing, Sanders chalked up the brink-of-war message to a “typo,” and essentially told reporters to chill. The original message also appeared in a @WhiteHouse tweet, which has been deleted, though the cached version lives on for now. 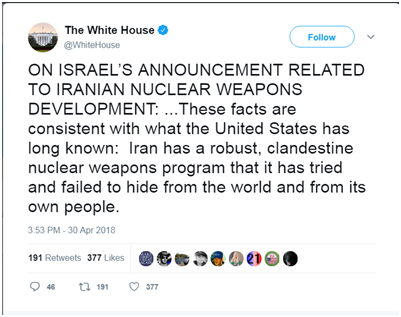 Has we been had? Was “has” a sloppy but innocent error, proving yet again that incompetence trickles down from the top? Or, was it some kind of psy-ops typo, planted to create a false first impression? Research shows that first impressions often stick even if they’re later proven wrong. So, though it circulated for only a few hours, the meme that “Iran cheated on the deal!” echoes on.

Whether “has” was intentional or accidental, it came with plausible deniability, if only because the line of dumb but usually harmless mistakes—misspellings, mangled dates, and grammatical misdemeanors that commonly fall under the umbrella term “typos”—is so long in the Trump administration. Of course, much of the volume is due to Trump’s prolific tweeting. But these typos also fly out of the press office and other corners of the White House, and undoubtedly at a higher rate than in prior administrations. Press releases in the Obama White House, for instance, were typically proofread by multiple people, according to Liz Allen, a deputy communications director under President Obama. “We felt a burden and responsibility to get it right,” she told The Washington Post’s David Nakamura in March. “No one should meet a higher bar than the White House.”

The Trump typos show the same slapdash, careless attitude that the president has for facts. Abetted by a kind of “good enough for government work” contempt for their public jobs, Trumpers seem to sow wiggle room into every statement, as if they know each announcement is provisional and possibly a cover for something else. (As you may have heard, The Washington Post recently found that “President Trump has made 3,001 false or misleading claims” in his first 466 days in office.)

A statement from Sanders’s office on the death of former first lady Barbara Bush, for instance, was dated April 17, 2017, a full year early. The day after his inaugural, the 45th president of the United States tweeted that he was “honered to serve.” A White House press release last May said that Donald Trump was traveling to Israel to promote “the possibility of lasting peach.” (For more, see this running list, up to last October, from former New York Daily News reporter Jason Silverstein.)

Take, for example, March 21, when Trump squeezed five typos into one tweet, setting a new record, according to The Daily Dot. “Special Council is told to find crimes, wether crimes exist or not. I was opposed to the the selection of Mueller to be Special Council, I still am opposed to it. I think President Trump was right when he said there never should have been a Special Council appointed because…..” Jeannie Moos on CNN ended a two-minute bit on the subject by explaining that “wether” means a castrated ram. And Ryan Parker of the The Hollywood Reporter gave the tweet an “F.”

Trump’s trouble with the written word is irresistible to mock, especially for those who make a living by words, like journalists and comedians. But that’s not just because we’re desperate for laughs. The potholed prose also serves as interactive, sleuthy games.

There’s “Find the Motive Behind the Typo,” as I played at the top of this piece with has-gate. Why, for instance, does Trump continue to misspell “counsel” when he’s been repeatedly corrected? In the tweet above, Trump fixed “the the” and “wether,” but not “Special Council.” Jimmy Kimmel quipped that he kept the misspelling “to show his base he won’t be swayed by a bunch of left-wing liberal dictionaries.” And maybe instead of giving Mueller an insulting nickname (did some lawyer forbid that?), Trump decided that he won’t legitimize Mueller by spelling his title correctly. That’ll show him. (A month later, Trump was still calling Mueller the “Special Council.” Maybe the joke’s on us. As NWC wrote on Sparta Report, “lefties retweeting it to each other while laughing and mocking the misspelled word” just gives “the original message even more exposure. The message that the special counsel is illegitimate and needs to be removed.”)

A related game could be called “Guess the Author.” Robert Draper wrote a New York Times Magazine profile of Dan Scavino, who was once Trump’s golf caddy and is now his social-media director. Draper estimates that Scavino “is responsible for—at least as a ‘co-conspirator’”—about half of the 37,000 or so tweets sent out under @realDonaldTrump.

So who composed this recent tweet about Stormy Daniels (whose real name is Stephanie Clifford)? “Prior to its violation by Ms. Clifford and her attorney, this was a private agreement. Money from the campaign, or campaign contributions, played no roll in this transaction.”

Assuming a lawyer wrote it, did Trump add “roll” to make it his own? Or did Scavino or a lawyer throw in a deliberate misspelling? Or maybe Scavino doesn’t always spell so well himself.

More consequential, and creepy, is the question of authorship of the now-infamous letter, purportedly written by Trump’s former doctor, Harold Bornstein. It claimed that, if elected, Trump would “be the healthiest individual ever elected to the presidency.” Based on the absurd boasts and the narcissistic slips—like addressing the letter “To Whom My Concern”—nearly everyone who could read assumed it came from Trump’s brain. Bornstein recently confirmed that Trump dictated the whole thing to him and then sent someone to pick it up. (Shades of Devin Nunes’s midnight run.)


Because Bornstein is such a “character” and Trump’s English is so amusing, we’ve made a mere joke out of what is a true scandal. So writes Paul Waldman (italics his): “a presidential candidate was hiding his medical situation from the public.” If Hillary had done it… well, you know the rest.

In April, Reliable Sources, the CNN media-watch show hosted by Brian Stelter, devoted a segment to Trump’s buggy language, starting with a tweet that attacked reporter Maggie “Habberman.” (Trump later corrected it to Haberman.) Stelter also dinged Trump for getting dates wrong and for misspelling “shady,” as in “Shadey James Comey.” He even offered to proofread and fact-check for the White House. As a former copyeditor who bristles at missing hyphens, I sympathize with Stelter.

“I know this is not the most important issue in the world,” Stelter said, “but I do think it’s important because it speaks to—if you can’t get the small stuff right, can you get the big stuff right like a North Korea summit?”

On the other hand, Trump’s true believers may see the opposite dynamic—that you can’t get the big stuff right if you spend your days obsessing over tiny things like missing letters and verb tenses. As one of Stelter’s guests, Sarah Ellison of The Washington Post, told him, their very “conversation is exactly the kind of thing his base would mock,” that they’d see Trump’s imperfections as “some sort of authenticity.”

And that’s it. These sort of discussions play into the everlasting oppositional stereotypes: populists vs. elites, schoolyard bullies vs. schoolmarms, people who cling to guns vs. those who cling to commas.

Some of these stereotypes are true: We journalists can be a supercilious lot, and we could use a little humility. Maybe we find it a little too satisfying to catch Trump tripping over pebbles. If Trump does goes on to win the Noble Peach Price, jokes like this will be weak consolation.

On the Wrong Track: Why Biden Abandoned Rail Workers

Why Do So Many International Students Leave the US?