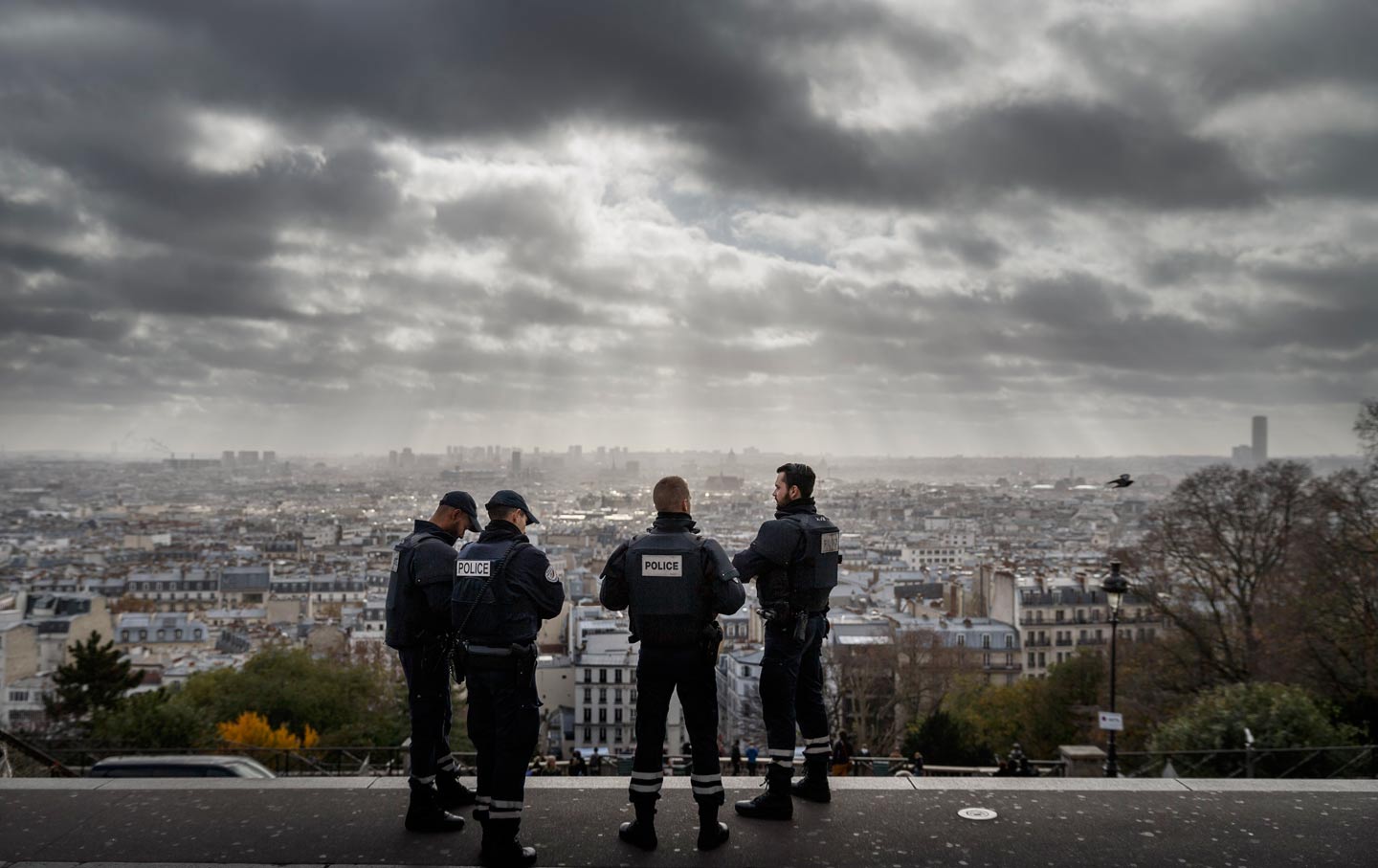 Paris is seen as French Police officers stand on guard near the church of Sacre Coeur, on top of the Montmartre hill, in Paris, Wednesday, November 18, 2015. (AP Photo / Daniel Ochoa de Olza)

The United States’ military strategy has long been predicated on being able to fight two wars at once. Now the horrific terrorist attacks in Paris, just weeks before the French capital hosts a landmark international climate-change summit, will test whether the world as a whole can address two crises at once. Massacring innocent civilians is never justified and calls for a range of responses: grief for the victims and their loved ones; solidarity with all who condemn such heinous acts; bringing to justice the immediate perpetrators; and unraveling the deeper causes of such violence. These necessities, however, must not be allowed to distract the world’s governments, media, or citizens from the equally urgent task of reversing our collective march toward climate chaos.

Dooming young people and future generations (not to mention other species) to an unlivable planet is no more justified than killing innocent civilians is, and it too demands a range of responses, starting with compassion for the victims. Vermont Senator Bernie Sanders is correct to link the Syrian refugee crisis to climate change (as US national security officials and scientists have long done). ExxonMobil and other perpetrators of climate denial should be brought to justice. World leaders should agree in Paris to leave most of earth’s remaining fossil fuels in the ground, as the latest science dictates. Such a goal requires launching the most rapid possible transition to “100 percent clean energy for all,” as activists have urged. Humanity has the tools needed to exit the Carbon Age and build a sustainable future; what’s required are dramatically different political and economic choices.

Dooming future generations to an unlivable planet is no more justifiable than killing innocent civilians.

Insisting that the power to fight climate change resides not only in the corridors of global elites but also in ordinary people in the streets, activists had planned a huge march through Paris on November 29 to greet heads of state arriving for the two-week summit, along with sister marches in cities around the world. The terrorist attacks threw plans for that march into question; French authorities worried that large numbers of people streaming through the streets of Paris would be difficult to protect. Representatives of Coalition Climate 21, the international alliance of groups coordinating activism around the Paris summit, insisted the restricting of civil society from expressing itself during a summit covering humanity’s future was unacceptable. “We can think of few better responses to violence and terror than this movement’s push for peace and hope,” said Alice Jay, of the group Avaaz, a member of the coalition. In the end, the government prohibited street marches but said demonstrations in closed, more easily protected places would be allowed. The sister marches planned in Washington, D.C., Los Angeles, London, Berlin, Tokyo, New Delhi and scores of other major cities will proceed, with activists saying that attendance there will now be even more important.

For his part, Barack Obama heads to Paris as a credible (though hardly perfect) climate leader because he has been pressured by increasingly visible and disruptive activism. Grassroots protests both pushed and created the political space for the president to reject the Keystone XL pipeline this month. But the League of Conservation Voters’ controversial early endorsement of Hillary Clinton for president illustrates that the US climate movement remains divided between a grassroots wing, which has been winning victories such as Keystone by disrupting politics as usual, and the “Big Green” groups like the LCV, headquartered in Washington, DC, which favor working within the status quo to achieve the best outcome available.

Keystone is not the only feather in Obama’s climate cap, and the president himself deserves credit for two particular achievements. The diplomatic breakthrough he reached with China last year is genuinely historic. Not only does the agreement commit the world’s two climate superpowers to slash heat-trapping emissions and  super-accelerate clean-energy development; it also makes possible an international agreement in Paris by breaking the US-China stalemate that doomed previous summits. Obama may also be the only major head of state to publicly affirm that most fossil fuels must be left in the ground, saying in a 2014 interview, “We’re not going to be able to burn it all.”

But words are one thing, deeds another, and rejecting Keystone was a mighty deed. “A head of state has never rejected a major fossil fuel project because of its climate impacts before,” wrote Bill McKibben, co-founder of the grassroots group 350.org, of Obama’s decision. (In truth, climate change was one of four reasons that Obama gave.  The first three were: Keystone would not increase oil supplies, lower gas prices, or create more than a handful of long-term jobs.)

Grassroots activists quickly claimed credit for the victory, and rightly so. Would anyone seriously argue that the White House would have killed Keystone in the absence of mass civil disobedience and the other in-your-face tactics that made it a litmus test for a politician’s seriousness about fighting climate change? Would anyone argue the same about the Keystone reversal of Hillary Clinton, who as secretary of state said that she was “inclined” to support the pipeline, and whose State Department issued favorable assessments written by a consultant nominated by the pipeline company itself?

Clearly, most Big Green groups can claim little credit: They disparaged the strategy of growing a grassroots movement by targeting Keystone, and some even joined the inside-the-Beltway political class’s dismissal of Keystone as a distraction from the truly important battles.

Similar strategic differences underlie the explosive backlash that greeted the LCV’s November 9 announcement that it was endorsing Clinton for president. “This is either shameless pandering or incredible naivete,” complained one of the more than 850 posts to bombard the LCV’s Facebook page in the 48 hours after the news broke. A second post ridiculed its description of Clinton as “a leader who will stand up to Big Polluters,” asking, “Did you take this post from [the satirical website] The Onion?” More than a few huffed that they would never again donate to the LCV, an organization founded in 1969 that became one of the environmental community’s first sources of hard-money campaign contributions. Historically, the LCV has funded mainly Democrats, but also the occasional Republican; in 2012, it backed Obama and spent more than $36 million at the federal, state, and local levels.

Speaking on background to maintain their working relationships with the LCV, many leading climate activists echoed the Facebook fury. Why choose Clinton, some asked, over Sanders, who “opposed Keystone from day one,” as the Vermont senator frequently points out, and advocates for a much faster shift to 100 percent clean energy than Clinton does? But most critics focused their comments on Clinton’s record, noting that Big Oil has long been a contributor to her electoral campaigns and is even “bundling” for her in 2016. (Bundling involves soliciting contributions from like-minded individuals and delivering them en masse, thus signaling the candidate how much a given interest group has donated.) As a senator, Clinton supported off-shore drilling (though she announced her opposition to Arctic drilling in August). She has also long supported fracking, and her State Department worked hard to spread fracking overseas.

In any case, why endorse Clinton so early, before a single primary has been held, and when two rival candidates and grassroots pressure are pushing her toward stronger positions? More than one critic speculated that the endorsement was pushed through by Carol Browner, chair of the LCV board, who served as the Environmental Protection Agency’s administrator under Bill Clinton.

Asked if LCV expected such harsh criticism, Tiernan Sittenfeld, LCV’s vice president for government affairs, chuckled, paused, and answered a different question. “We feel lucky to have a number of candidates on the Democratic side who have strong records,” she told The Nation. LCV’s endorsement is “not about Bernie Sanders, it’s about Hillary Clinton,” Sittenfeld continued. When asked, therefore, about Clinton’s support for fracking and off-shore drilling and Big Oil’s contributions, she neither disputed nor defended these aspects of Clinton’s record. She replied that Clinton had “a strong voting record” in the Senate, “did a lot on energy and climate issues” as secretary of state, and “was in the White House for eight years as first lady.” This combination of experience and “passion for addressing the climate crisis” makes Clinton the best choice “both to defeat her eventual Republican opponent, who will inevitably be a climate-change denier, and to hit the ground running on day one in the Oval Office.” Sittenfeld added that LCV had been “working absolutely as hard as any other organization” against Keystone, and she disputed that Browner was behind the endorsement of Clinton, saying, “Our full board [of directors] made that decision. We respect that others may take a different view, but we’re very committed and excited about our choice.”

“There are a number of exceptional folks at LCV, but it is terribly troubling at this moment in our planetary history to have a group so clearly adhering to a theory of change based on incrementalism and access,” responded one senior climate activist. “I know our movement needs to play both an inside game [in Washington] and an outside game [at the grassroots]. But if we really do the math, as Bill [McKibben] points out, we all know that we must transcend the current laudable but entirely inadequate policy agenda put forth by our Big Green colleagues and their political allies. We must push for what seems impossible, just as we did with Keystone, when some in our community consistently said that it was the wrong fight to pick. But we pushed and redefined the terms of the debate, and we won.”

Redefining the terms of the debate is essential to defusing the climate crisis and the terrorist challenge alike. Entrenched forces and beliefs must be confronted; solidarity and the common good must take precedence over prejudice and selfishness; our children’s future must matter more than past hatreds. Transcending these two scourges will not be easy, immediate, or assured, but the more people who join the effort, the better our chances. The coming days in Paris, and the years beyond, will reveal how well we have met the challenge.

Editor’s note: This article has been updated to include further response from LCV’s Tiernan Sittenfeld.