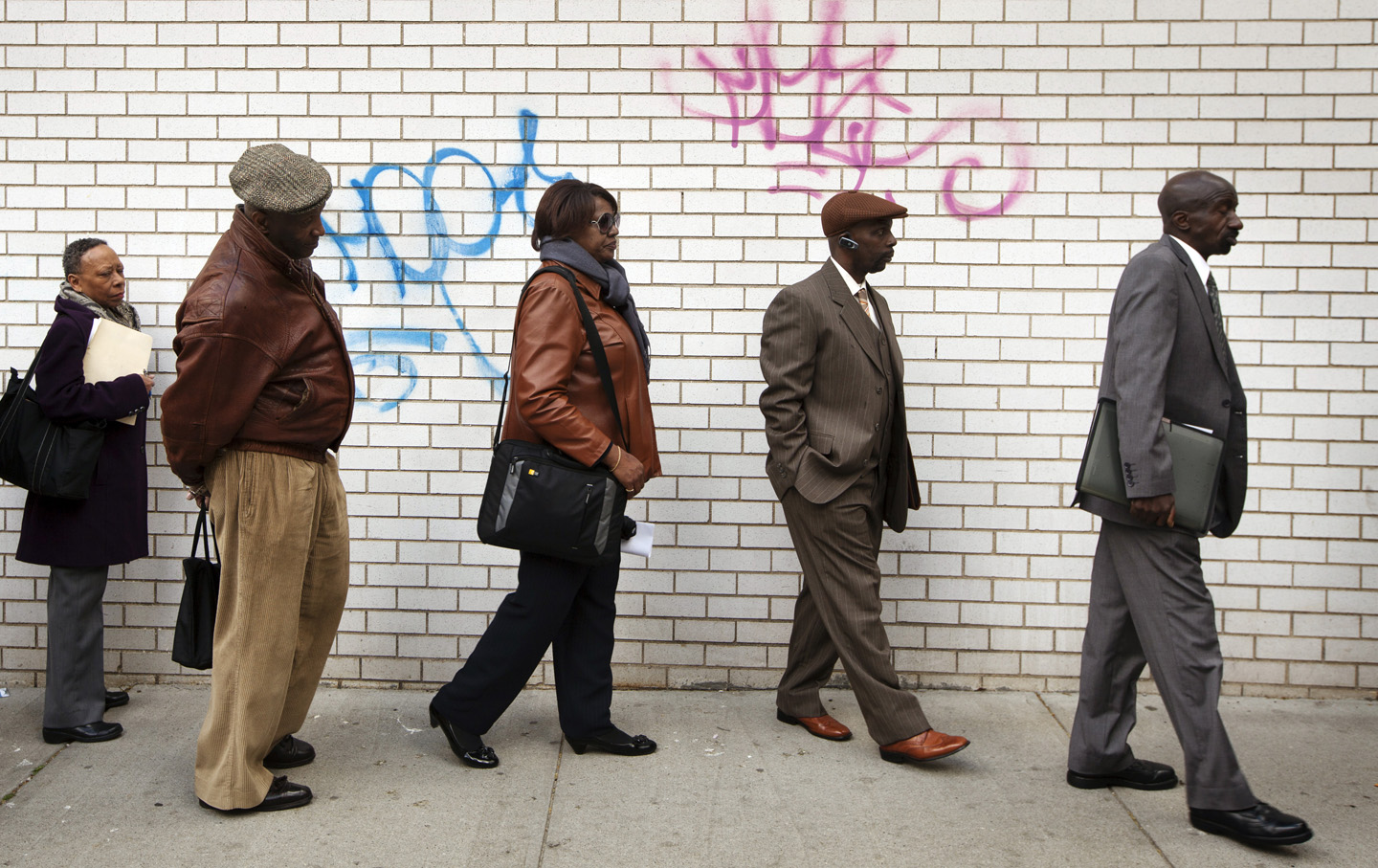 If current economic trends continue, the average black household will need 228 years to accumulate as much wealth as their white counterparts hold today. For the average Latino family, it will take 84 years. Absent significant policy interventions, or a seismic change in the American economy, people of color will never close the gap.

Those are the key findings of a new study of the racial wealth-gap released this week by the Institute for Policy Studies (IPS) and the Corporation For Economic Development (CFED). They looked at trends in household wealth from 1983 to 2013—a 30-year period that captured the rise of Reaganomics, expanded international trade and two major financial crashes fueled by bubbles in the tech sector and housing prices. The authors found that the average wealth of white households increased by 84 percent during those three decades, three times the gains African-American families saw and 1.2 times the rate of growth for Latino families.

To put that in perspective, the wealthiest Americans—members of the Forbes 400 list—saw their net worths increase by 736 percent during that period, on average.

If those trends persist for another 30 years, the average white family’s net worth will grow by $18,000 per year, but black and Hispanic households would only see theirs grow by $750 and $2,250 per year, respectively.

By the time the Fair Housing Act made housing discrimination illegal, people of color had missed out on decades of robust growth.

“[Economist] Thomas Picketty said that, left uninterrupted, we would move toward a hereditary aristocracy of wealth,” says Chuck Collins, one of the study’s authors. “What he didn’t say is that in the United States, that would be almost entirely a white aristocracy of wealth.”

The study looked at financial wealth—stocks, bonds, and the like—real estate and business capital, but excluded durable goods like cars and consumer appliances. Like other studies of the racial wealth gap, it excluded Asian Americans and Pacific Islanders, Native Americans, and other people of color because of limitations in the underlying data.

Recent years have brought a heightened focus on income inequality, but while they’re related, wealth inequality is far more pronounced. According to a study published by Demos last year, the median income for whites in 2011 was around 50 percent higher than it was for blacks and Latinos, but whites’ median household wealth was around 16 times greater.

It took 400 years of slavery, segregation, and institutionalized discrimination in the labor and housing markets to build the wealth gap that we see today. For example, by the time the Fair Housing Act made discrimination in housing illegal in 1968, people of color had missed out on decades of robust growth in the housing markets (and much of the next generation missed out on that wealth building in the 20 years it took to fully implement the law). “The racial wealth divide is how the past shows up in the present,” Chuck Collins tells The Nation. “We have a deep legacy of wealth inequality that undermines the whole idea that we have a meritocracy—that there’s an equal playing field.”

The racial wealth gap continues to grow not only because of income inequality—whites have more dollars to sock away—but because accumulated wealth is a mechanism for transmitting economic success from generation to generation. It’s a vicious cycle—poor communities have limited tax bases to fund their public-school systems, which lead to sharp disparities in educational quality. A family with some assets can help their kids pay for an education or put a down payment on a first home or kick them some seed money to start a small business. All of those things help the next generation climb the economic ladder. Wealth also provides an important cushion against unexpected shocks—things like temporary job losses or unexpected medical bills. If you’ve got some wealth, you can weather the storm without getting over your head in debt.

According to Princeton University sociologist Dalton Conley, the wealth of a child’s family is the single greatest predictor of that child’s future economic prospects. Conley, whose data did include things like cars and household goods, found that even white households hovering around the poverty line have a net worth of $10,000 to $15,000, but the typical black family at that income level will often be under water, with a negative net worth. In many cases, that means turning to usurious predatory lenders to stay afloat—an added expense of being poor.

A truly perverse aspect of this story is that just as past public policies created the racial wealth gap, current policy continues to widen it. The federal government spends a fortune subsidizing wealth-building activities like paying for college, saving for retirement or buying a home, but most of those dollars go to people who already have wealth. Since 1994, government spending on wealth-building has more than tripled—from $200 billion in 1994 to $660 billion last year—according to the IPS/CFED study. The costliest of those subsidies is the home-mortgage tax deduction, and a 2013 study by the National Priorities Project found that 77 percent of those benefits go to households with annual incomes between $75,000 and $500,000. Similarly, an estimated two-thirds of all public subsidies for retirement savings go to those with incomes in the top 20 percent of the distribution. We’re spending a fortune on wealth building, but very little of it ends up bolstering the net worths of poor people and people of color.

The persistence—and growth—of the racial gap provides a powerful rationale for reparations for African Americans, who are the furthest behind whites in accumulating wealth and have endured the most brutal forms of racism. Advocates like William Darity Jr., a professor of African-American studies and economics at Duke University, picture a program of reparations as a sort of Marshall Plan for poor communities of color, with major investments in health care and education and local infrastructure and seed money for small-business start-ups.

But the politics of reparations are fraught, and they wouldn’t help close the wealth gap for other people of color, much less for poor whites. The IPS/CFED report calls for a number of policies that would rationalize federal spending on wealth-building activities so that they target those who need the help. They include one proposal that’s been around for a while: giving every baby born in the United States a savings account with a modest sum, and then using public funds to match what low-income households are able to save. When a young person hits 18, the accounts could then be used to help finance a college education, or to buy a first home or start a new business. Any remaining funds would be dedicated to retirement.

There’s certainly room to debate the best policies for addressing the racial wealth gap, but the report published this week confirms that if we do nothing it will just continue to grow, and any semblance of a level economic playing field in the United States will remain ever elusive.