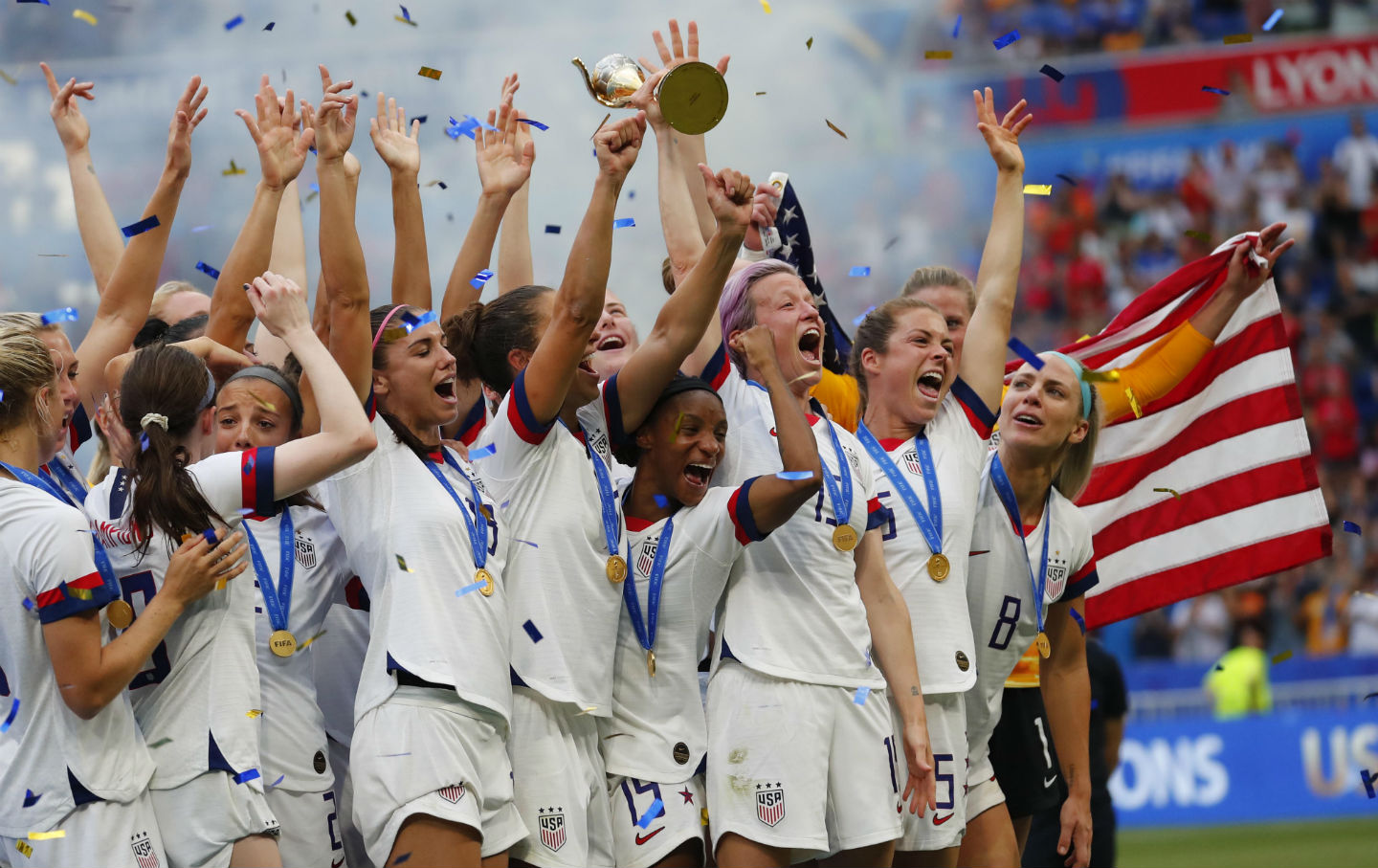 Pondering this past year on the Edge of Sports, the easiest possible decision is figuring out who is our Sportsperson of the Year. I rarely agree with Sports Illustrated’s decision on these matters—or the hollowed-out husk of what was once Sports Illustrated—but this year they named the only possible choice: Megan Rapinoe. It’s been remarkable for me to see Rapinoe’s ascension from a little-known soccer player with great—albeit ignored—politics to an international icon in a few short years. It has to be noted, and Rapinoe would be the first to say, that attention first came her way when she knelt in solidarity with Colin Kaepernick in 2016. But since then, she has become a front-line leader for social justice in her own right, in particular taking up the issue of equal pay for women and turning it into a demand that extended far beyond the soccer field. She and her team, on the road to their thrilling World Cup triumph, became a social movement that happened to play soccer. They collectively—with Rapinoe at the front—popularized the question of economic justice for women to the point where their throngs of fans were chanting “Equal pay!” as much as they were chanting “USA!” Along the way, with every garland of glory, she has made political speeches, speaking out for LGBTQ, gender, racial, and economic justice, all while under the seething eye of the orange smear in the White House, who was practically rooting for this World Cup team to fail. Oh, and by the way, she did all this while dominating on the field, picking up every award along the way.

But Rapinoe was not the only story of 2019. Not even close. The weak-kneed reactionaries who are already proclaiming the end of the ascension of political athletes simply haven’t been paying attention. Jocks who are using their platform to actually say something about the world aren’t going anywhere, even in the face of the army of Trumpian white nationalists poised to pounce upon them. There was NBA vet Kyle Korver writing a remarkable viral essay in April about whiteness and wrestling with how to be an effective ally. There were the Boston Red Sox players of color, including their manager Alex Cora, last May, refusing to go to the White House in open solidarity with the people of Puerto Rico. There was soccer player Alejandro Bedoya in August, speaking out on the field for gun control after the massacres in El Paso and Dayton. There was NFL player Kenny Stills also in August, calling out his own then-boss, Miami Dolphins owner Stephen Ross, for his hypocrisy in calling for racial healing while raising millions for Trump. There was the California victory in September in the battle by college athletes to control their name, image and likeness, and at last loosening the stranglehold that the NCAA has on their rights. There were the Mississippi(!) basketball players kneeing during the anthem in protest of white supremacist groups rallying in Oxford against their right to play. There were trans athletes refusing to be silenced and put on the bench despite an organized backlash. More recently, and I haven’t even had the chance to write about this in depth, soccer star Mesut Özil has spoken out in solidarity with the viciously oppressed Muslim Uighur minority in China. And then there is Colin Kaepernick, still unbreakable, still stubbornly himself, showing up to his hastily called clown show of an NFL tryout wearing a Kunta Kinte shirt, wanting back in the league but refusing to do it on their terms; refusing to be broken.

The sports world has, in my mind, strongly reflected the broader political scene. Just as 2019 must be remembered not only as a time of authoritarian ascendancy but also for the massive protests against austerity and for democracy across the world, this year the backlash and efforts to silence athletes was met by an electric, albeit under-reported, resistance. And here we get into the most disturbing legacy of 2019. The ability to amplify these voices suffered greatly with the death of the website Deadspin, the aforementioned gutting of Sports Illustrated, and the broader crisis in newspapers around the country. Consider this a call to arms to young journalists and prospective sportswriters across the country whose horizons extend beyond the playing field: You are needed, now more than ever. The future is murky. Employment prospects are ailing. But the fight is ongoing. It must be chronicled and remembered, or risk being lost in the hot air.