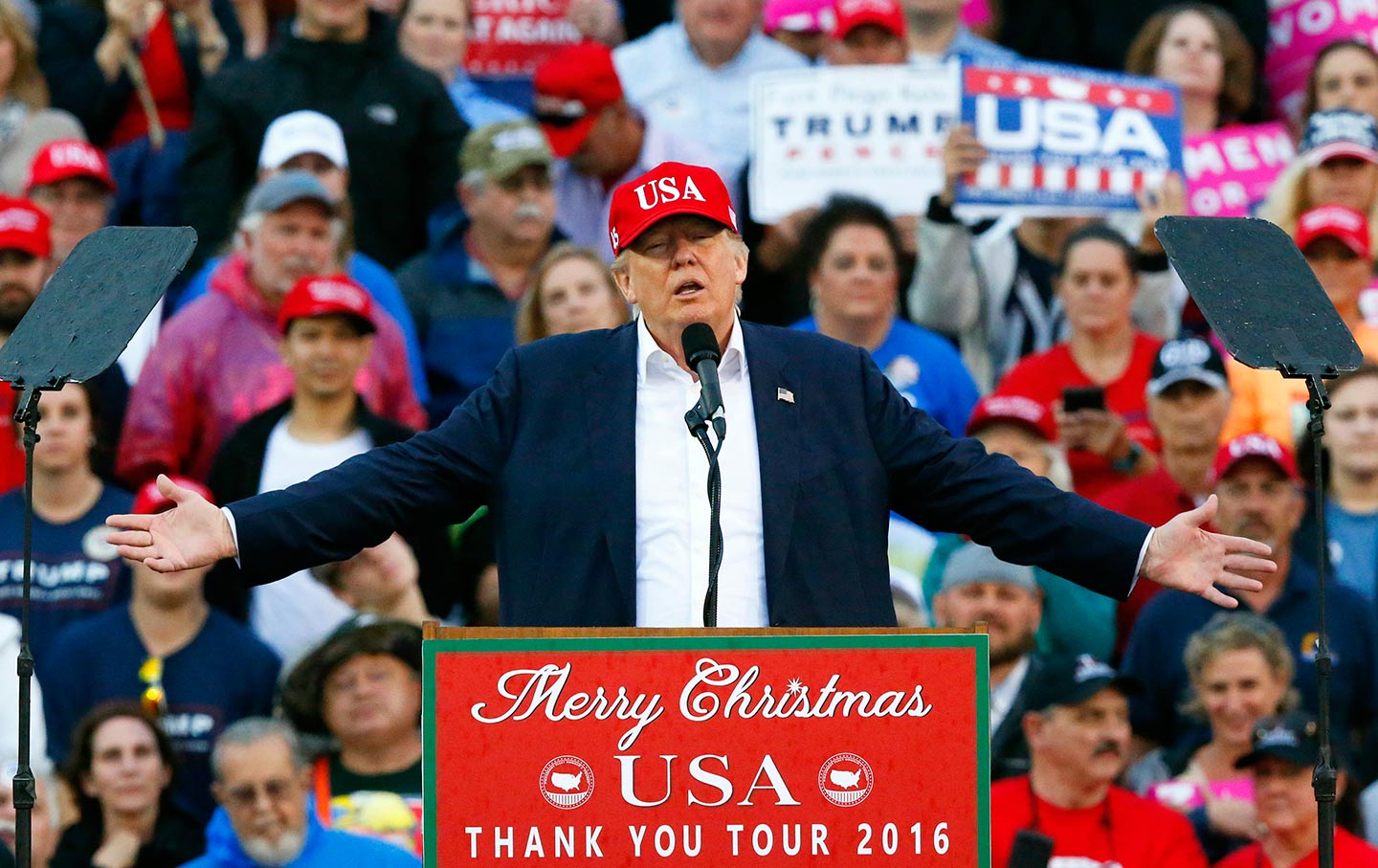 For starters, we have two branches of government—­the president and Congress—that view the press as little more than a nuisance, fit only to be manipulated for propaganda purposes when that’s possible and demonized and degraded when not. A radicalized Republican Party— encouraged by phony-baloney “both sides do it” reporting—is committed to denying reality and treating with contempt any truthful journalism its leaders find unhelpful. The Trump campaign doubled—nay, quadrupled—down on these tactics, employing physical and legal threats when it didn’t get its way. It banned press organizations it didn’t like, and had reporters arrested for trying to cover campaign events. The candidate himself repeatedly threatened to sue news organizations over stories that displeased him. He also egged on his violent, fanatical supporters to attack reporters—who were literally kept in stockades during his rallies. His campaign manager even attacked a female reporter while being filmed on video. Many of these same journalists were subjected to online threats and harassment by racist and anti-Semitic Trump supporters, which naturally served as a warning to everyone else.2

Mainstream journalists, used to collaboration, simply don’t know how to report on a president who is also a compulsive liar.

As president-elect, Trump’s tactics have continued apace. He has repeatedly lied on Twitter and attacked news organizations that report honestly about his actions—thus inspiring new threats and harassment. He has dispensed with long-standing practices meant to keep the citizenry informed, such as providing for pool reporting, and hints darkly at further changes to come.3

Many media organizations are doing their best to live up to their constitutional and professional responsibilities. But they face a number of obstacles, beginning with the fact that they have no experience covering an American president who doesn’t even pretend to care about truth. Mainstream journalists are used to collaborating with politicians to tell the truth a little bit at a time. Lies are accepted when they fit the master narrative, but they need to hover within an acceptable range of plausibility. At the very least, they require the pretense of evidence, however specious it might be.4

American journalists simply don’t know how to report on a president who is also a compulsive liar. Wall Street Journal editor in chief Gerard Baker recently admitted as much when he explained to NBC’s Chuck Todd that by accusing a politician of having “lied,” journalists “run the risk that you look like…you’re not being objective.” Trump’s lie in question was the alleged celebrations by New Jersey Muslims on 9/11. Baker’s own newspaper had disproved this dangerous and potentially violence-inspiring calumny. And yet, like many news executives, he placed the appearance of “objectivity”—itself a self-serving fiction—above his responsibility to truth. (To make matters worse, Baker’s paper, which still boasts more than 2 million subscribers despite owner Rupert Murdoch’s debasement of its once-reliable news reporting, has undertaken a new advertising campaign that brags that Journal readers alone saw Trump’s election coming.)5

Then there’s Trump’s Twitter feed. Filled with falsehoods and threats, it has become a crack-like addiction for reporters, successfully diverting attention from reporting about Trump’s corruption, incompetence, ignorance, dishonesty, misogyny, prejudice, and authoritarian tendencies, to name just a few of the new president’s charms. Favoring spectacle over substance, journalists fall for this gambit every time—like Charlie Brown trying to kick the football.6

These are just a few of the apparently insurmountable hurdles that even the most dedicated reporters and editors face in trying to report honestly on Trump’s presidency. Yet these institutions would be hampered even under a normal president, given the economic and cultural forces that have eaten away at the media’s ability to carry out its constitutional and professional responsibilities. The number of newsroom employees at our daily papers—where almost all verifiable reporting originates—­is now less than half what it was in 1990, and falling as quickly as ever. These papers’ economic weakness, moreover, can invite potentially crippling lawsuits like those funded by billionaire Trump adviser Peter Thiel, designed to shut down outlets whose reporting is inconvenient to the powerful. No less worrisome are the deliberately invented “fake news” sites that promote the most radical and ridiculous aspects of Trump’s agenda. Thanks to Facebook, Twitter, and Google, they have filled this void without sanction.7

Over the last year, we have also seen what might be called the “Trumpification” of cable news. All three cable-news networks enjoyed massive increases in viewership—­and profits—thanks to their eagerness to embrace the Trump phenomenon and, with it, his lies, threats, and megalomania. Fox News, as always, was the worst, gleefully joining Trump’s round-the-clock anti-journalist jihad. CNN’s Corey Lewandowski argued that New York Times executive editor Dean Baquet should be jailed for the paper’s reporting on Trump’s still-secret tax returns. CNN hired Lewandowski despite knowing that he was still being paid by Trump to lie on his behalf, having signed both nondisclosure and nondisparagement agreements after he was fired as campaign manager. Meanwhile, MSNBC continued to offer 15 hours of airtime every week to former Republican congressman Joe Scarborough and his sidekick, Mika Brzezinski, who act as unpaid advisers-cum-supplicants to Trump, both on and off the air. Brzezinski was sadly accurate when, seeking to defend the duo, she told The Washington Post recently: “You can take every tenet of journalism and show that we’re breaking it.”8

Fasten your seat belts, people. It’s going to be a bumpy four years.9