Sydney Neal was already planning to attend the March for Our Lives in Washington when tragedy struck her community on Tuesday. A student opened fire at the nearby Great Mills High School, killing 16-year-old Jaelynn Willey and wounding another student. On Saturday morning, Neal, the president of the association of student councils in St. Mary’s County, where the shooting happened, found herself outside Union Station with a megaphone, urging fellow Maryland students to help stop the scourge of gun violence and end the bloodshed.

“People are so desensitized to it,” she told me afterwards. “You always think it’s not something that will happen in my town, in my community, at my school. But when you hear those sirens coming down, and you hear about community members and fellow students that you know personally having this tragedy wreak havoc in their schools, it really snaps you right back into reality.”

Neal was among the hundreds of thousands of protesters who showed up Saturday for the March for Our Lives in Washington, the largest gun-control rally in a generation and the biggest public demonstration of the Trump era after his inaugural weekend.

Only students and young people took the stage on Constitution Avenue, just a few blocks from Congress, led by survivors of the mass shooting last month at Marjory Stoneman Douglas High School in Parkland, Florida. Saturday was a rallying cry for an emerging cohort that is clearly tired of adult inaction. “People believe that the youth of this country are insignificant. People believe that the youth have no voice,” said Stoneman Douglas student Alex Wind. “I say that we were the only people who could have made this movement possible.” 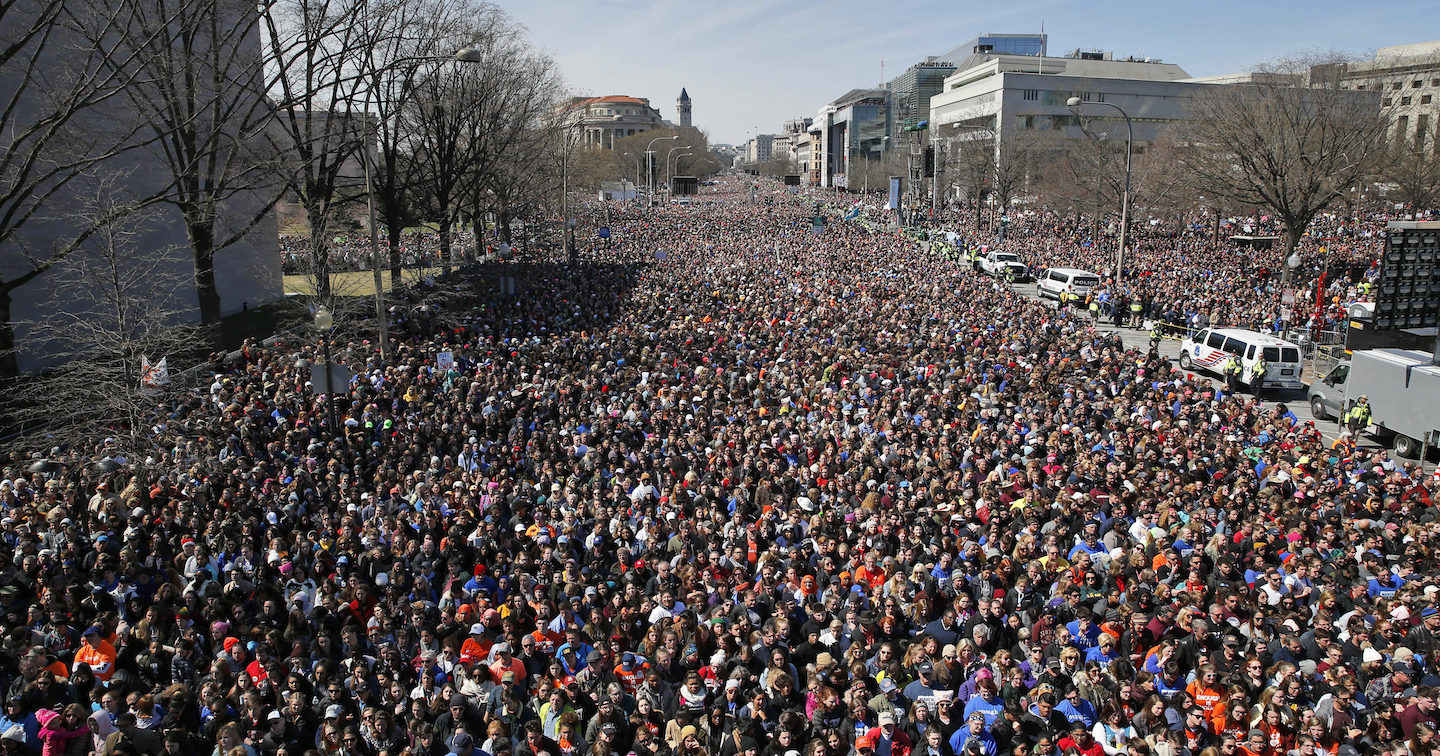 6 Minutes and 20 Seconds That Could Change the World

There were plenty of adults attending the rally, but many of the signs they held had messages like “We are here for the students.” They seemed to know this movement didn’t need adult supervision—and maybe it’s really the other way around. “Our generation failed you. It’s time for you to lead us out of the darkness of gun violence,” Donna Edwards told the Maryland students outside Union Station. Edwards was a former member of Congress who is now running for executive of Prince George’s County. “I thank you for showing the kind of leadership our generation simply did not show.”

Teachers appeared to be everywhere at the rally, driven out in no small part by President Donald Trump’s proposal to arm educators nationwide. “Arm Teachers? Another Dumb Idea, Donald,” read one sign. “The most dangerous thing in my classroom should be a pop quiz,” said another. And, “You don’t want this teacher with a gun.”

“I think it’s a ridiculous and pretty dangerous proposal to talk about teachers’ having guns,” said a woman named Laura, who teaches in the Baltimore area but did not want to disclose her full name nor school district. “Yesterday, we had a [active shooter] drill, and as this develops we’re seeing our kids become actually afraid rather than just ‘Oh, okay, this is something we have to do.’ They take it really seriously now, which I actually—I’m glad they do, because it’s important, but I’m not glad that they have to be afraid.”

Other adults were driven into the streets because of their experience with gun violence, too. Dr. James Moak is an emergency-room doctor at the University of Virginia Medical Center in Charlottesville. I found him marching down Constitution Avenue in his white doctor’s coat, holding a protest sign. “We have a scourge of gun violence in our country. I’ve taken care of too many people who have been victims of gun violence,” he said. “And we just need more common sense laws to prevent injuries and deaths due to guns and inappropriate use of them.

“We maybe grew up seeing movies of people who get hit by a bullet, but they keep on going. Bullets are designed to kill. It’s very easy to hit the wrong structure and have a lethal injury before you know it,” Moak said.

To help translate the energy in the streets—particularly the youth energy—volunteers with voter registration forms were everywhere at the Washington rally, signing people up to vote in whatever state they came from. The group HeadCount said it sent thousands of volunteers to dozens of rallies nationwide, in what organizers hope will be the single largest one-day voter-registration drive in history.

The students who marched are ready to change things, and they know it won’t be easy—but many feel called to the task. “Now it’s fallen on our generation, and it’s our responsibility to make the changes so that the next generation doesn’t have to suffer from the same tragic events,” said Neal.

Uniting Against the American War Machine