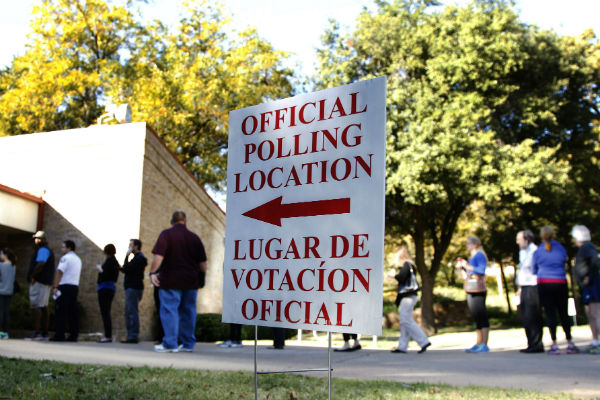 Texas’s new voter ID law got off to a rocky start this week as early voting began for state constitutional amendments. The law was previously blocked as discriminatory by the federal courts under the Voting Rights Act in 2012, until the Supreme Court invalidated Section 4 of the VRA in June. (The Department of Justice has filed suit against the law under Section 2 of the VRA.) Now we are seeing the disastrous ramifications of the Supreme Court’s decision.

Based on Texas’ own data, 600,000 to 800,000 registered voters don’t have the government-issued ID needed to cast a ballot, with Hispanics 46 to 120 percent more likely than whites to lack an ID. But a much larger segment of the electorate, particularly women, will be impacted by the requirement that a voter’s ID be “substantially similar” to their name on the voter registration rolls. According to a 2006 study by the Brennan Center for Justice, a third of all women have citizenship documents that do not match their current legal name.

Just yesterday, this happened (via Rick Hasen), from KiiiTV in South Texas:

“What I have used for voter registration and for identification for the last 52 years was not sufficient yesterday when I went to vote,” 117th District Court Judge Sandra Watts said.

Watts has voted in every election for the last forty-nine years. The name on her driver’s license has remained the same for fifty-two years, and the address on her voter registration card or driver’s license hasn’t changed in more than two decades. So imagine her surprise when she was told by voting officials that she would have to sign a “voters affidavit” affirming she was who she said she was.

“Someone looked at that and said, ‘Well, they’re not the same,’” Watts said.

The difference? On the driver’s license, Judge Watts’s maiden name is her middle name. On her voter registration, it’s her actual middle name. That was enough under the new, more strict voter fraud law, to send up a red flag.

“This is the first time I have ever had a problem voting,” Watts said.

The disproportionate impact of the law on women voters could be a major factor in upcoming Texas elections, especially now that Wendy Davis is running for governor in 2014.

Moreover, the state is doing very little to make sure that voters who don’t have an ID can get one. As I mentioned, 600–800,000 registered voters don’t have an acceptable voter ID, but according to the Dallas Morning News “only 41 of the new cards were issued by DPS [Department of Public Safety] as of last week.”

Getting a valid photo ID in Texas can be far more difficult than one assumes. To obtain one of the government-issued IDs now needed to vote, voters must first pay for underlying documents to confirm their identity, the cheapest option being a birth certificate for $22 (otherwise known as a “poll tax”); there are no DMV offices in eighty-one of 254 counties in the state, with some voters needing to travel up to 250 miles to the closest location. Counties with a significant Hispanic population are less likely to have a DMV office, while Hispanic residents in such counties are twice as likely as whites to not have the new voter ID (Hispanics in Texas are also twice as likely as whites to not have a car). “A law that forces poorer citizens to choose between their wages and their franchise unquestionably denies or abridges their right to vote,” a federal court wrote last year when it blocked the law.

Texas has set up mobile voter ID units in twenty counties to help people obtain an ID, but has issued new IDs to only twenty voters at the sites so far.

Supporters of the voter ID law, such as Governor Rick Perry, argue that it’s necessary to stop the rampant menace of voter fraud. But there’s no evidence that voter impersonation fraud is a problem in Texas. According to the comprehensive News21 database, there has been only one successful conviction for voter impersonation—I repeat, only one—since 2000.

Texas has the distinction of being one of the few states that allows you to vote with a concealed weapons permit, but not a student ID. Provisions like these suggest that the law was aimed less at stopping voter fraud and more at stopping the changing demographics of the state. Based on what we’re seeing thus far, the law might better be described as the Republican Self-Preservation Act.