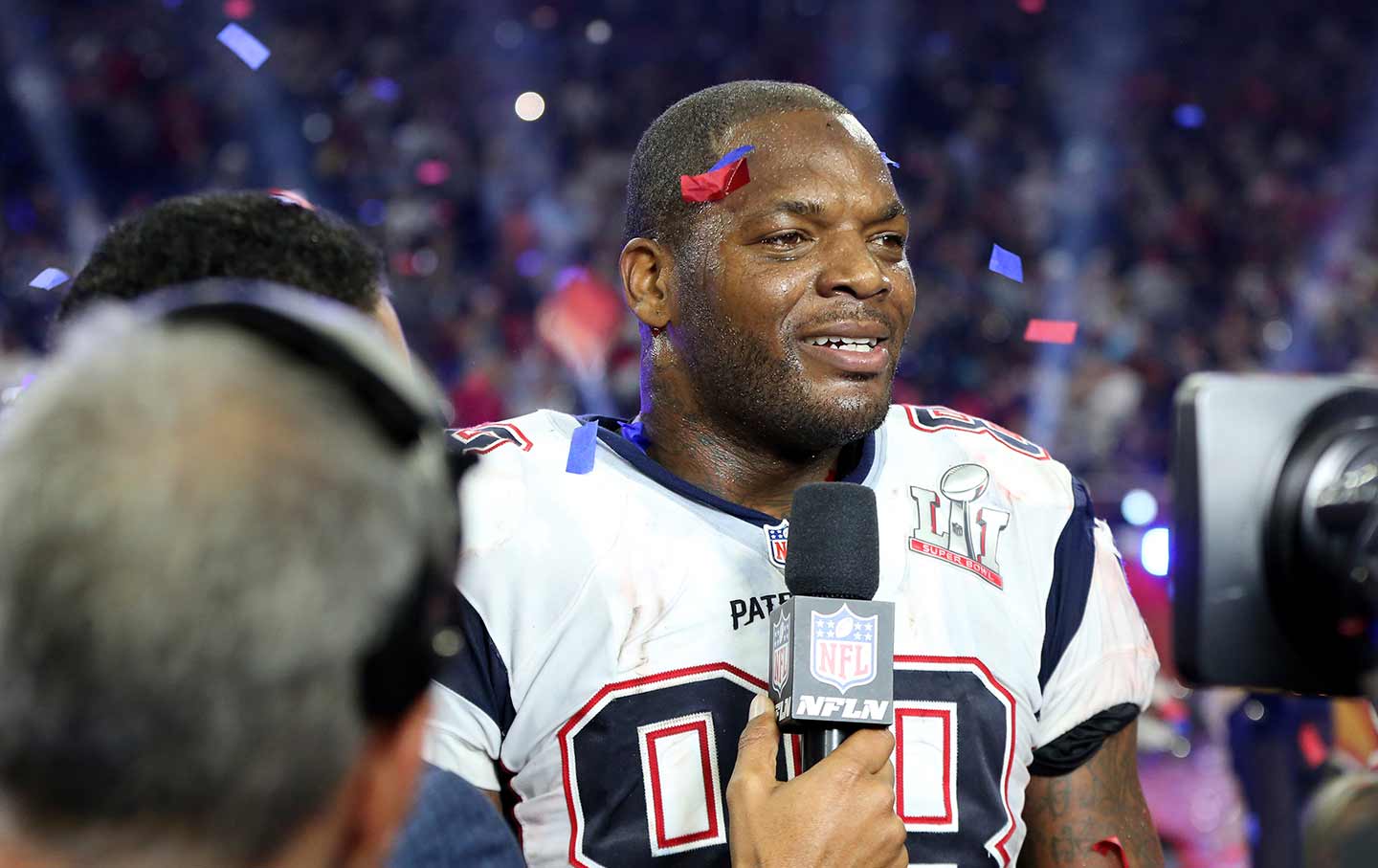 The champagne had not even dried in the Patriots locker room last Sunday when New England tight end Martellus Bennett restated that there was no way he would be visiting Trump’s White House to celebrate the Super Bowl victory with his teammates. He said this even though no team in sports is as identified with Trump as the Patriots, because of the president’s friendship with owner Bob Kraft, coach Bill Belichick, and quarterback Tom Brady. When asked if he was concerned about the response from Kraft, Bennett said, “I’m not really worried about that. I’m not worried about it at all…. It is what it is. People know how I feel about it. Just follow me on Twitter.”

Sure enough, on the lacerating, loopy, and at times relentless Twitter feed of Martellus Bennett, his feelings have been crystal clear. On January 28, he said of Trump, “Surprised the president dude didn’t ban celebrating Chinese New Year in America!!”

When Kanye West went through his short-lived infatuation with Trump, Bennett tweeted, “So Kanye didn’t take the time to vote. And now he holding on to Trump’s coattail like Peter Pettigrew to Lord Voldemort. Kanye Pettigrew.” (Bennett, who also writes acclaimed children’s books and is a proud Harry Potter fan, is comfortable with a good Hogwarts burn.)

As uproar over his decision to not visit the White House bubbled, he tweeted, “Media makes me seem like I’m Katniss Everdeen. Lol.” (Katniss Everdeen, is of course the protagonist of the young-adult Hunger Games series, who leads a people’s revolution against a despotic, swinish, bizarrely coiffed despot).

Now his teammate Devin McCourty has also come forward to say that he will not attend any kind of ceremony with Trump. “I’m not going to the White House,” he told Time in a text message. “Basic reason for me is I don’t feel accepted in the White House. With the president having so many strong opinions and prejudices I believe certain people might feel accepted there while others won’t.” Patriots linebacker Dont’a Hightower has also said he will not go to the White House, saying, “Been there, done that.”

They won’t be the only Patriots players to skip, but it’s not surprising that they are the first. Bennett and McCourty also raised their fists during the anthem during the opening game of the season, as part of the group of NFL players who took part in pre-game protests against racism and for Black Lives.

It would be difficult for anyone in the provincial world of Boston sports radio to make some kind of argument that skipping the White House is objectionable, since quarterback Tom Brady didn’t show up at the White House with the team to meet President Obama two years ago, although it wasn’t what anyone would call a principled political decision. As Deadspin remembered, “[Bennett and McCourty] appear willing to own their decision, unlike Tom Brady, who two years ago claimed a ‘prior family commitment’ when he skipped the Patriots’ White House visit with Barack Obama, and instead spent his day working out and shopping at the Apple Store.”

While the team is a favorite of infamous white-supremacist Richard Spencer because of its identification with Trump and “great number of white wide receivers,” the fact is that this is still a team that is 67 percent African American. It is also a team with white players like Chris Long who spoke sympathetically about the Black Lives Matter protests during the season and just announced that he will not be attending the reception at the White House.

That puts the number of players committed to skipping up to four. The question might end up being who, other than Kraft, Belichick, and Brady, shows up at all. This is a president who keeps a white supremacist as his “strategic adviser” and appointed an attorney general who was too racist to become a federal judge. He mocks civil-rights leaders of the past, and seems to think that Frederick Douglass is some guy living in the United States who “is an example of somebody who’s done an amazing job and is being recognized more and more.”

The Patriots will end up showing two definitions of patriotism on the day of their visit: one defined by fealty to the White House, and another that stands up to all enemies foreign and domestic. But let the last word go to Martellus Bennett, who tweeted earlier this week, “I’m going to speak my mind because guess what…for a looonngg time my ancestors didn’t have a voice.… Your favorite athlete stands on his platform to be seen. I stand on my platform to shout. To be heard.”

Updated on 2/10/2017: Since the publishing of this article, two more New England Patriots, have stated that they would turn down any invites to the White House: defensive tackle Alan Branch and running back LeGarette Blount. Speaking to Rich Eisen of the NFL Network, Blount said, “I will not be going to the White House. I don’t feel welcome in that house. I’ll leave it at that.”