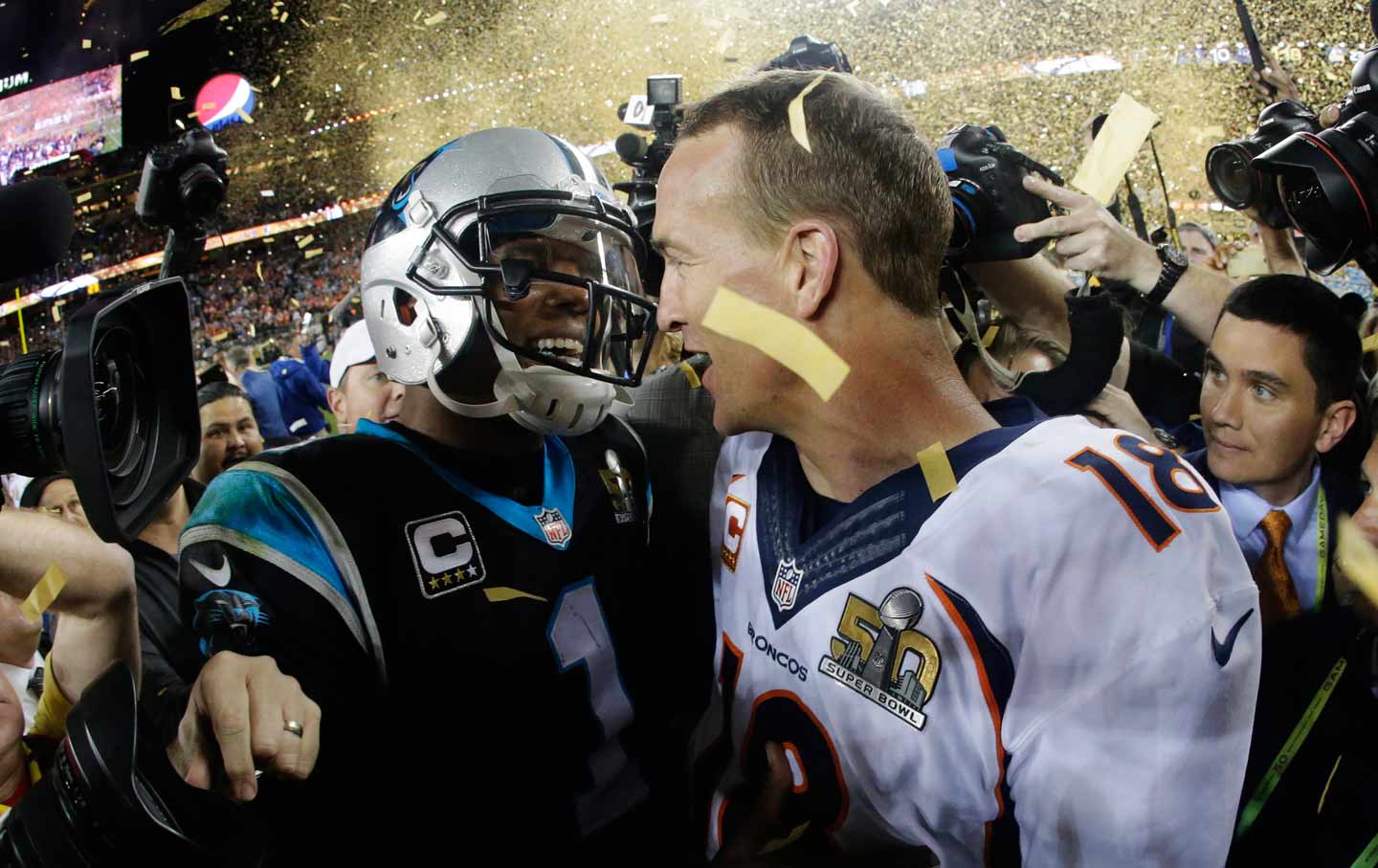 There was a time way back in the last century when the Super Bowl was a guaranteed clunker: a preordained blowout where the only reason to tune in would be the ingenious, quirkily creative commercials, stunning examples of the mangled collision of art and commerce. Maybe you had to watch a game that ended with a score of 42-10, but you got to see Apple computers make a black-and-white revolution against Orwellian subservience (in the form of IBM).

This year’s game was a return to that turgid past, with the Denver Broncos beating the Carolina Panthers 24-10, in a contest with enough flags, fumbles, and failure play to make up a season highlight package for the 1976 Tampa Bay Buccaneers. Yet this year there was not even the saving grace of inventive ads designed to make us sit up in our seats. If you were from another planet and judged earth solely on the basis of these Super Bowl advertisements, you’d be forgiven for thinking that we are a place of heterosexual breeders who somehow find people to have unprotected sex with, despite our toe fungus, irritable bowel syndrome, or opioid constipation. As much as $5 million was spent for every 30 seconds of commerce, with Big Pharma ubiquitous in its presence. Their ads had such an unrelenting scatological tone that my Twitter feed was filled with references to the “Pooper Bowl” or the “Super Bowel.” Second to the parade of prescription drugs were the NFL ads “celebrating” the children who were born nine months after the Super Bowl throughout the years. It wasn’t endearing, it was creepy.

Even the night’s highlight: Beyonce’s performance of her fierce new single “Formation” felt like it was cut way too short because the halftime concert organizers clearly needed more time for… Coldplay. The British band was such an awkward choice for the halftime festivities that they brought in Beyoncé and Bruno Mars to save the day. The two certainly tried, but Chris Martin, the lead singer of Coldplay, kept poking his head between the two performers like a cold shower. Far more importantly, Queen Bey’s background dancers gave us the photo of the night, holding up a photo that read “Justice for Mario Woods,” remembering the young man who died in a hail of gunfire at the hands of San Francisco police. It demonstrated that the black berets and X formations of Beyoncé’s set were not just radical chic but represented a depth, substance, and concrete links to the call for justice.

It does, however, speak volumes that the highlight of the evening was a photo posted on Twitter. The lowlight was seeing Carolina Panthers quarterback Cam Newton, the NFL’s MVP, get humbled by a historically great Denver Broncos defense. It reminded me of legendary New York Times sportswriter Robert Lipsyte’s description of seeing Muhammad Ali toy with Floyd Patterson as resembling the act of “pulling off the wings of a butterfly piecemeal.” For people who had fallen for Cam, the night was difficult to endure. According to ESPN’s stats department, Cam “was pressured on 42.9% of his dropbacks, the highest percentage in a game of his career.” After the game, he walked out of his press conference after three minutes, which has already led to a new round of dim-witted, starch-headed takes about his faults as a leader. Cam Newton is not a bad leader. Cam Newton is a human being, although a human being that clearly a great many people—after his epic season—wanted to see brought low.

Meanwhile, as Cam Newton was pilloried, 39-year-old Denver Broncos quarterback Peyton Manning was glorified. Despite the fact that he also played a wretched game by any statistical measure, despite the fact that he is being investigated by the NFL for using human growth hormones (to be clear, I don’t give a shit what any of these athletes put in their bodies to play the most violent sport on earth), he was lionized in the aftermath as the ultimate role model. Meanwhile, former player Bill Romonowski called Cam Newton “boy” on Twitter. (He later deleted the tweet and apologized.)

It was that kind of a night. Unless you were somehow connected to the city of Denver, a big fan of awful offensive line play, or appreciate the quicksilver fast Broncos linebacker Von Miller, it was difficult to endure. The ugliness of it all turned damn near satirical when Peyton, in what may be his last game, took time after the contest to kiss his business partner John Schnatter, the owner of Papa John’s Pizza, on the cheek and namedropped Budweiser on national television. Even with his entire family looking on, even in the afterglow of what was perhaps his last time on a football field, Peyton still found time to shill. It was uncomfortable and even nauseating to witness. It was also completely in tune with the environment. This is the NFL: a warped moral universe where Peyton is a hero, Cam is a villain, we all cuss each other out on social media, and the guys in the backroom count the money laughing at the rubes. They say, “The NFL Is Family,” but maybe Commissioner Roger Goodell’s marketeers are making a cheeky organized-crime reference, since it is not a family worth claiming as your own.