When Ayman Mao performed at the sit-in outside the Sudanese army’s headquarters in Khartoum, he was overwhelmed. Online videos of his April 25 concert show him in a dasahiki and newsboy cap and wrapped in a Sudanese flag, swinging left to right onstage with a mic in hand. The evening concert was illuminated with the cell-phone lights of tens of thousands of protesters and fans in attendance—unthinkable just two weeks before. With a confident attitude and strong voice, he started with his most recognizable song, the chantey “Dum” (Blood), and the crowd responded loudly after each verse with thawra! (revolution).

“Dum” has become the anthem of the uprising, which toppled dictator Omar Hassan al-Bashir in April. It takes on new meaning now: In images reminiscent of Sudan’s conflict zones, security forces stormed the site of the two-month-old sit-in—the epicenter of the uprising—on June 3, the last day of Ramadan, firing live ammunition, killing at least 30 and injuring hundreds. They burned several cultural-activity tents to the ground and cleared the site of protesters. Activists responded with calls for a general strike and civil disobedience. In a late televised announcement, Lt. Gen. Abdel Fattah al-Burhan, chair of the ruling Transitional Military Council, said he would end negotiations with the Freedom and Change Forces, an alliance of political groups that has led the protests; investigate the events of June 3; and hold elections in nine months.

For months, protesters had chanted the song’s verses during demonstrations. Children made cell-phone video recordings of themselves singing it. Civil servants on strike in government offices shouted out its lyrics as they faced off against officials. “There were no words to express my feelings,” Mao said after his performance.

What started as protests on December 19 in the northeastern town of Atbara against the overnight tripling of bread prices soon spread throughout the country, including the capital of Khartoum, transitioning into high gear with a large sit-in on April 6. Authorities responded with force, but the protests grew.

Sudan’s Unfinished Revolution: The Dictator Is Gone, but the Fight Continues

Sudan’s Third Uprising: Is It a Revolution?

On April 11, under popular pressure, the Sudanese army intervened and removed Bashir from power, ending his near-30-year rule. Then came the battle of negotiations between the Freedom and Change Forces, which has been demanding civilian rule, and the Transitional Military Council. Many in Sudan, distrustful of the military, have been fearful of the “deep state” and the influence of neighboring powers that may consign their uprising to a fate like the ones in Egypt, Libya, Syria, and Yemen. For weeks, thousands refused to leave the sit-in.

Protest songs have long played a key role in inspiring and mobilizing regional dissent and mass movements against dictators. In Tunisia there was El Général’s “Rayes Lebelad” (President of the Country); in Egypt there was Ramy Essam’s “Irhal” (Leave); in Burkina Faso, Sams’K Le Jah’s “Ce Président Là” (This President); and in Algeria “La Casa del Mouradia” (House of Mouradia), originally a soccer chant by fans of the Algiers club USMA.

“It can help people imagine a different future for themselves, create a sense of solidarity within an amorphous crowd, and transform what was once thought of as impossible into something inevitable.” said Professor Zachariah Mampilly of Vassar College, co-author of Africa Uprising: Popular Protest and Political Change.

Sudan’s own popular uprisings of October 1964 and April 1985—the first in Africa and the Middle East to unseat military dictatorships—brought about protest songs like “October al-Akhdar” (Green October) and “Masajeenik” (Your Prisoners), which cemented the places of singers Mohammed Wardi and Mohammed al-Amin in Sudanese memory. In the Sudan of 2019, a new generation of creative minds has put forward their art in support of the uprising, such as cartoonists Khalid Albaih and Boushra Elmougahid; graffiti artist Assil Diab; and the music of Nancy Ajaj and Nas Jota. But perhaps the most impactful of all have been the songs of Mao. 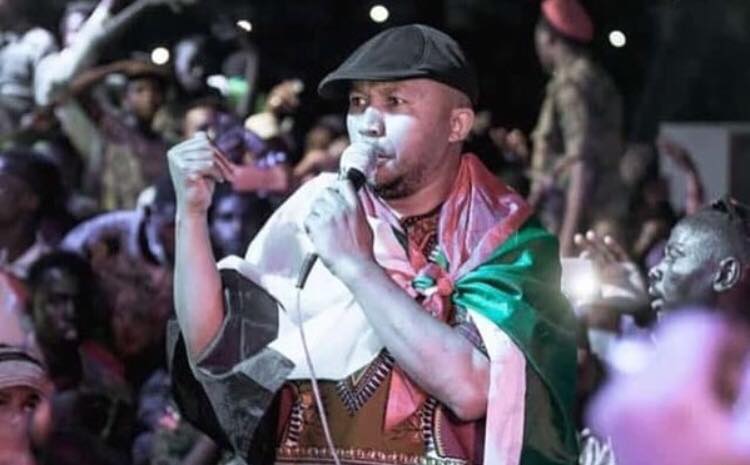 The singer Ayman Mao performing at the sit-in outside the Sudanese army headquarters on April 25, Khartoum. (Ayman Mao)

Born in Sudan, Mao—a childhood nickname and current stage name—began to show an interest in music in middle school. Like many young people, he was interested in newer and imported musical styles, especially reggae, inspired by the sounds of Bob Marley, Steel Pulse, and Third World. He joined a band in Khartoum, Sudanese Sound, and performed around the capital while attending university, where he was also an activist. Much of his music had a political slant, which often put him at odds with the authorities. “I wanted to appeal to the youth so they can see a different world,” he said at the time.

After years of harassment and seeing no future for himself in an atmosphere of authoritarianism, nepotism, and corruption, he left Sudan in 2009 for the United States. He obtained an MBA in business and works as a logistics officer, but in his free time, he continues to write songs.

Attentive to political developments overseas like the Arab Spring protests, Mao wrote “Ben Ali Harab” (Ben Ali Has Fled) in support of Tunisia’s Jasmine Revolution of 2010-11, and “Bashar” against Syrian dictator Bashar al-Assad, and he has participated in workshops with rappers in Jordan. In 2012, Mao collaborated with several Sudanese artists of diverse ethnic backgrounds on a song, “La (Dictatorship)” (No to Dictatorship), in support of protests there; the song became popular with activists. In September 2013, demonstrators in Sudan took to the streets again after the government doubled the price of gasoline. The government responded brutally, killing nearly 200.

“I was shocked at they could do to stay in power,” Mao told me. That inspired him to write“Dum.” In it, he writes:

Five years later, a worsening economy, hints at a constitutional amendment that would allow Bashir to run again after years of authoritarian rule, and continuing civil wars pushed Sudanese to a tipping point. Mass protests broke out once again. In the diaspora, Mao performed at community gatherings and rallies in Dallas; Washington, DC; and San Francisco in support of the uprising.

Along with the hashtag #TasgutBas (#JustFall) and the iconic photograph of activist Alaa Salah, “Dum” not only found new life but became one of the uprising’s most recognized symbols. “I could not imagine that it would go that far,” Mao told me.

When Bashir fell and focus shifted toward the push for civilian rule, Mao felt the need to be part of the historic moment. That’s when a few Sudanese community members in the diaspora stepped in and renewed his passport, bought him an airline ticket to Khartoum, and flew him off to Sudan. When he arrived at the airport, Mao, in disguise, immediately went to the site of the massive sit-in nearby. There, a stage was set up for him and others to perform in what was likely the largest concert in Sudan’s history. Despite technical problems, overcrowding, and the passing out of at least 14 attendees, the event was monumental. “The concert was overwhelming. I have never seen anything like it in my life!” said Ahmed Mahmoud, a filmmaker who attended the concert.

Now Mao is back in Texas and wary of developments in Sudan. But he still believes that history is on the side of the protesters. “I am confident we will win in the end,” he said. “They cannot trick the Sudanese people anymore.”