A global insurrection is currently taking place. From Chile to Ecuador to Colombia, from Sudan to Lebanon to Iraq, from Haiti to Iran to Hong Kong, working people, youth, and marginalized communities around the world are taking to the streets to reject austerity, oppression, oligarchy, inequality—the fruits of contemporary capitalism.

Even in the United States, the epicenter of neoliberal depoliticization, tensions are on the rise. Economic inequality is highlighting to an increasing degree the tolls the neoliberal era has taken on poor and working communities, while the ascendance of the political right wing—as well as the work of activist movements like Black Lives Matter—are forcing into the open the rigidity of the racial caste system on which this nation is based. And even though, on the national stage, Beltway technocracy and punditry continue to obfuscate these realities, on the local level, it’s hard for people to ignore the injustices taking place in their own neighborhoods.

A case in point is New York City.

Over the summer, New York Governor Andrew Cuomo, with the help of his political rival, New York City Mayor Bill de Blasio, announced the assignment of 500 additional Metropolitan Transit Authority and New York Police Department officers to the NYC subways, where they would, among other things, work to combat fare evasion (code for policing the poor). Then, in September, Cuomo also announced that the MTA would hire 500 more, entirely new subway cops, in order to address “quality of life issues” (code for policing the homeless).

Both ideas were immediately unpopular. In addition to costing $249 million over four years (of which the fare-evasion crackdown is expected to cover only $200 million) at a moment when the subway system is literally falling apart, city residents recognized that adding more overzealous cops to the crowded, poverty-dense subways and instructing them to police petty crime would do little more than terrorize straphangers—particularly black riders, who make up more than half of fare-evasion arrests despite being only a quarter of the city population.

Welcome to the Global Rebellion Against Neoliberalism

And sure enough, in October, videos of police brutality in subway stations began making rounds on social media. In one, a horde of cops point their guns through a subway-car window at a terrified 19-year-old, who asks onlookers to call his mother before the officers enter the car and tackle him to the ground. In another, police charge at a group of teenagers, and one cop sucker punches a 15-year-old in the face.

The incidents prompted citywide outrage, culminating in a mass display of civil disobedience: On November 1, some 1,000 people marched through Downtown Brooklyn, down into a subway station, and jumped the turnstiles while chanting demands to end the increased police presence. But as the weeks went on, egregious over-policing continued, with new videos surfacing every few days: officers trying to arrest a man for dozing off while waiting for a delayed train; cops wrestling a man to the ground for trying to sell snacks; two separate incidents of police handcuffing churro-selling women—beloved throughout the city—and confiscating their carts.

Like the subway-fare hike that sparked the ongoing protest movement in Chile, or the Internet-call tax in Lebanon, or the repeal of fuel subsidies in Ecuador, the New York subway situation has catalyzed an already volatile political moment in the city. After years of supposedly progressive state and city officials’ snubbing marginalized communities when it has come to incarceration, gentrification, homelessness, policing, and other topics, the subway policies have illustrated more clearly than ever the absurdity and brutality of austerity-driven policing—of how, in one of the richest cities in the world, residents get shackled and tackled for trying to make a living, or because they can’t afford a $2.75 train ride. Furthermore, the police-abuse videos—an all-too-familiar genre in the United States—have provided a language for New Yorkers to articulate the everyday oppression they know poor and marginalized folks in their city, across the country, and around the world experience.

Activists have recognized the significance of this moment, and they’ve taken action. After the churro-lady arrests, roughly a dozen groups from across the five boroughs came together to plan a second, larger action against the MTA and the NYPD—“with a shared politics around abolition and decolonization,” according to Amin Husain, an activist with the organizing collective Decolonize This Place. 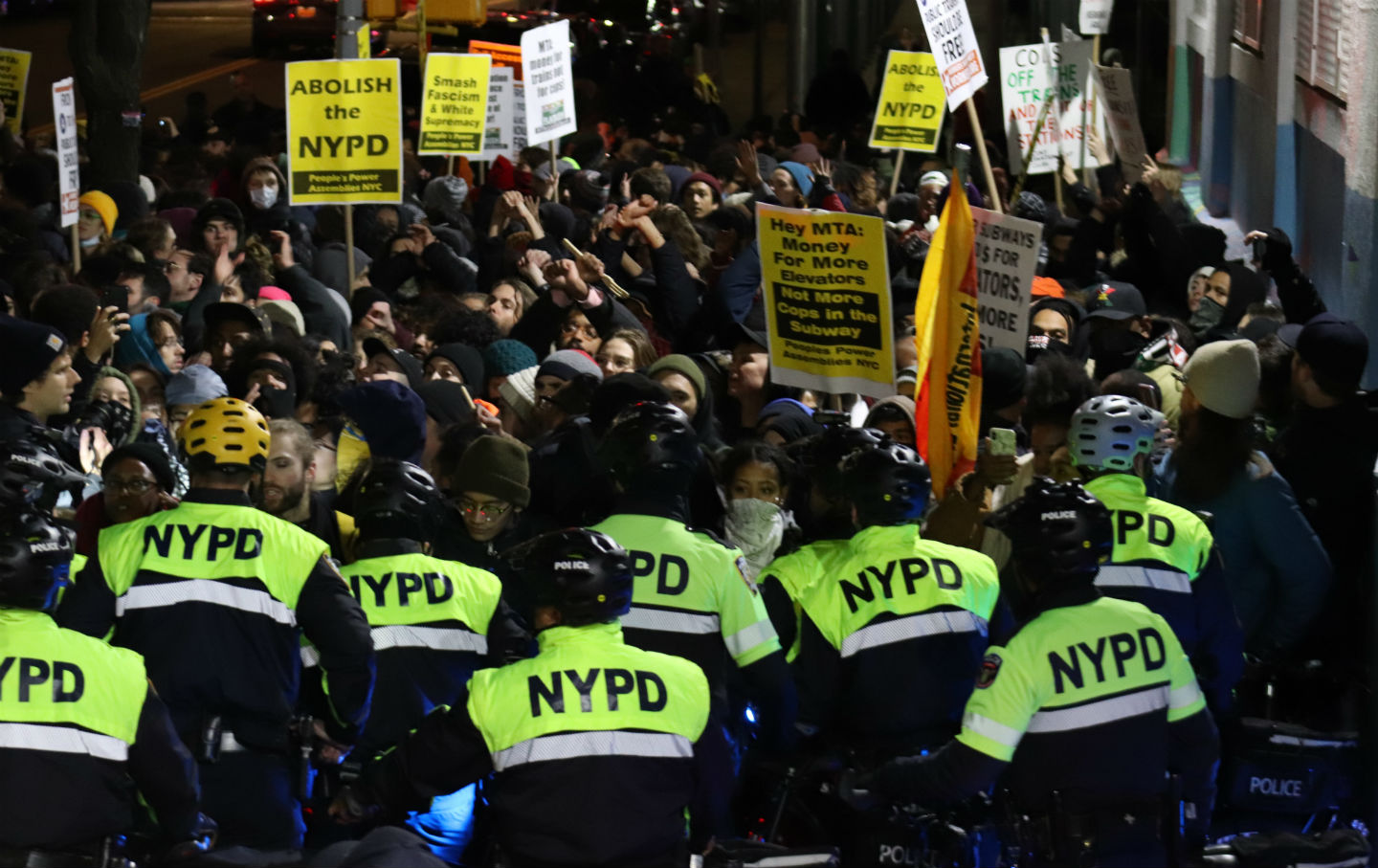 Though locally focused, the demonstration was to be a tip of the hat to the ongoing global uprising: Rallying against subway policies and police brutality is part of New York’s contribution to what Husain and his fellow organizers call a “May ’68 moment,” referring to the month of riots in France that sparked a year of global uprisings half a century ago. “It started with Haiti, it started with Sudan, then Hong Kong, and the indigenous movement in Ecuador,” said an activist with Take Back the Bronx, who asked to not be named to avoid any chance of police retribution. “That’s in the air—that organized and sporadic backlash” against austerity and oppression around the world.

Unlike resistance traditions in the Global South, the Take Back the Bronx activist continued, “people from the United States in general don’t have a very good understanding of what austerity and neoliberalism are.” But the marginalized in this country do feel their effects, “and they’re tired of it.”

The second demonstration took place last Friday evening. After dispersing from a decoy launch location so police couldn’t cordon everybody off, hundreds, likely thousands of people gathered in front of the Adam Clayton Powell Jr., state office building in Harlem.

The air was electric. As demonstrators piled into the diverse, largely young mass of bodies, organizers explained to those present the risks associated with participating in an unpermitted protest; the significance of holding a radical, black-led demonstration against the police in historic Harlem; and the hand signals and formations the demonstrators would need to use to protect one another from the cops. Then, everyone marched.

During the march, demonstrators held nothing back. Not in their chants: “No justice, no peace; fuck these racist police.” “How do you spell racist? N-Y-P-D.” Nor in their signs: “Full service, full access; no cops, no fares.” “Our subway needs $ for elevators, not more cops!” “No community occupation!” Nor in asserting their right to take to the streets.

The police came out in full force. At various points, cops on bicycles and out of vans tried to bottleneck protesters, halt their forward movement, or bisect the group. But the demonstrators constantly adapted: One band of separated marchers crossed a bridge into the Bronx, descended into a subway station, hopped the turnstiles, and evidently cut a turnstile arm as an act of resistance against fare policing. 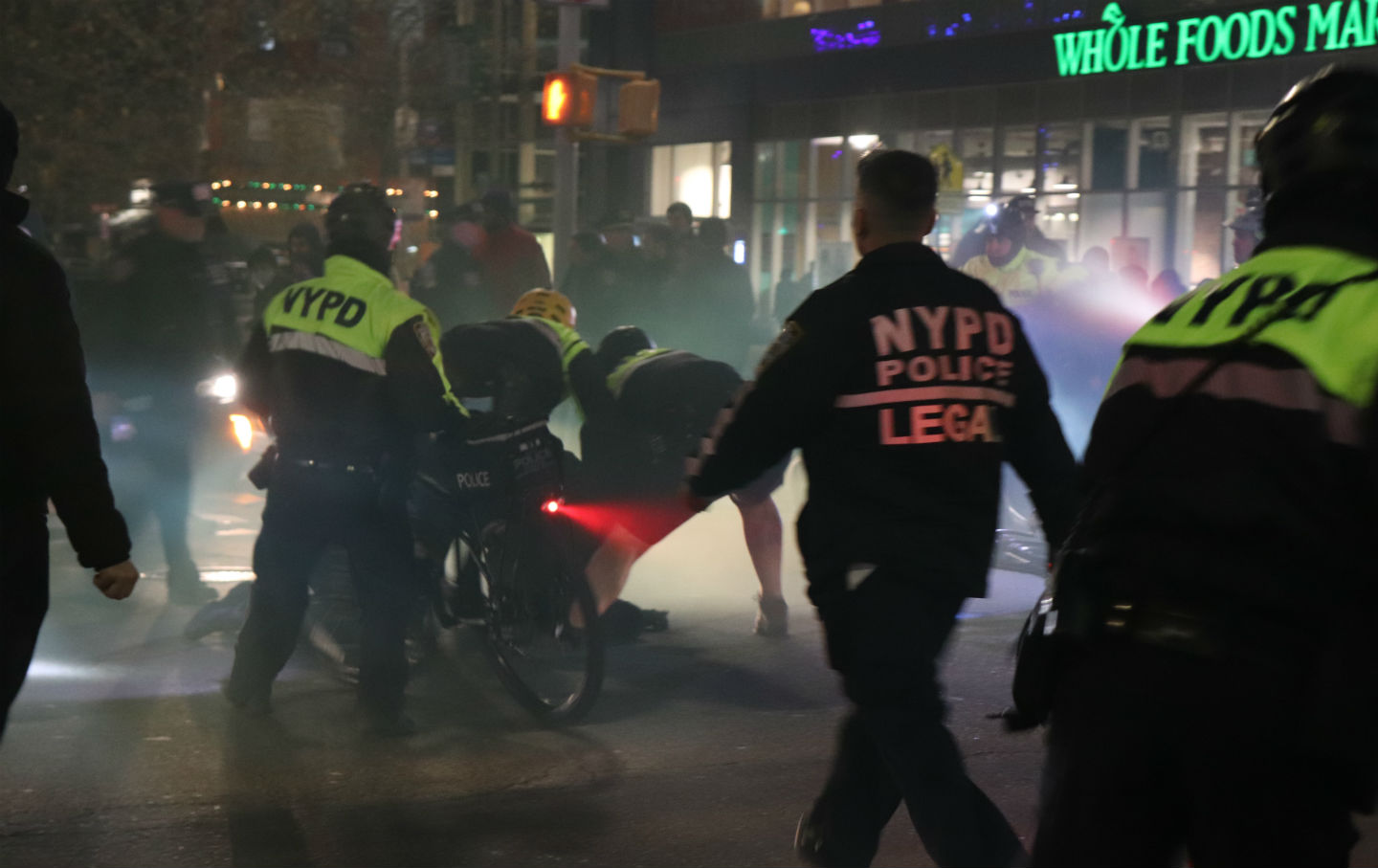 Police arrest a person in Harlem on November 22. (Chris Gelardi)

Frustrated cops also became aggressive. At several locations, they charged and tackled protesters. Some even made light of the brutalization: In one incident captured on video, a prone demonstrator complained that he couldn’t breathe with police on his back, to which a nearby cop commented with a grin, “If he can scream, he can breathe.” By the end of the night, police had made 58 arrests.

Throughout the demonstration, Harlem residents of all ages came out of their homes and businesses to cheer the protesters on. In return, organizers shared their ideas and motivations—including their international inspirations—via flyers. “In Haiti, in Chile, in Ecuador poor black, brown & indigenous people are rising up and popping off,” their handout said. “Cuz capitalism and white supremacy come together to form the fist, the taser, and the gun of the cop that enforces this fuck[ed] up existence forced upon us, our families, and our neighbors.”

According to organizers, the demonstration could work as a launching-off point for a sustained resistance against over-policing and the MTA—especially if subway cops don’t let up on their crackdown. “We’re not committing to next steps, and we don’t have to,” said Husain.

“This is a movement.”