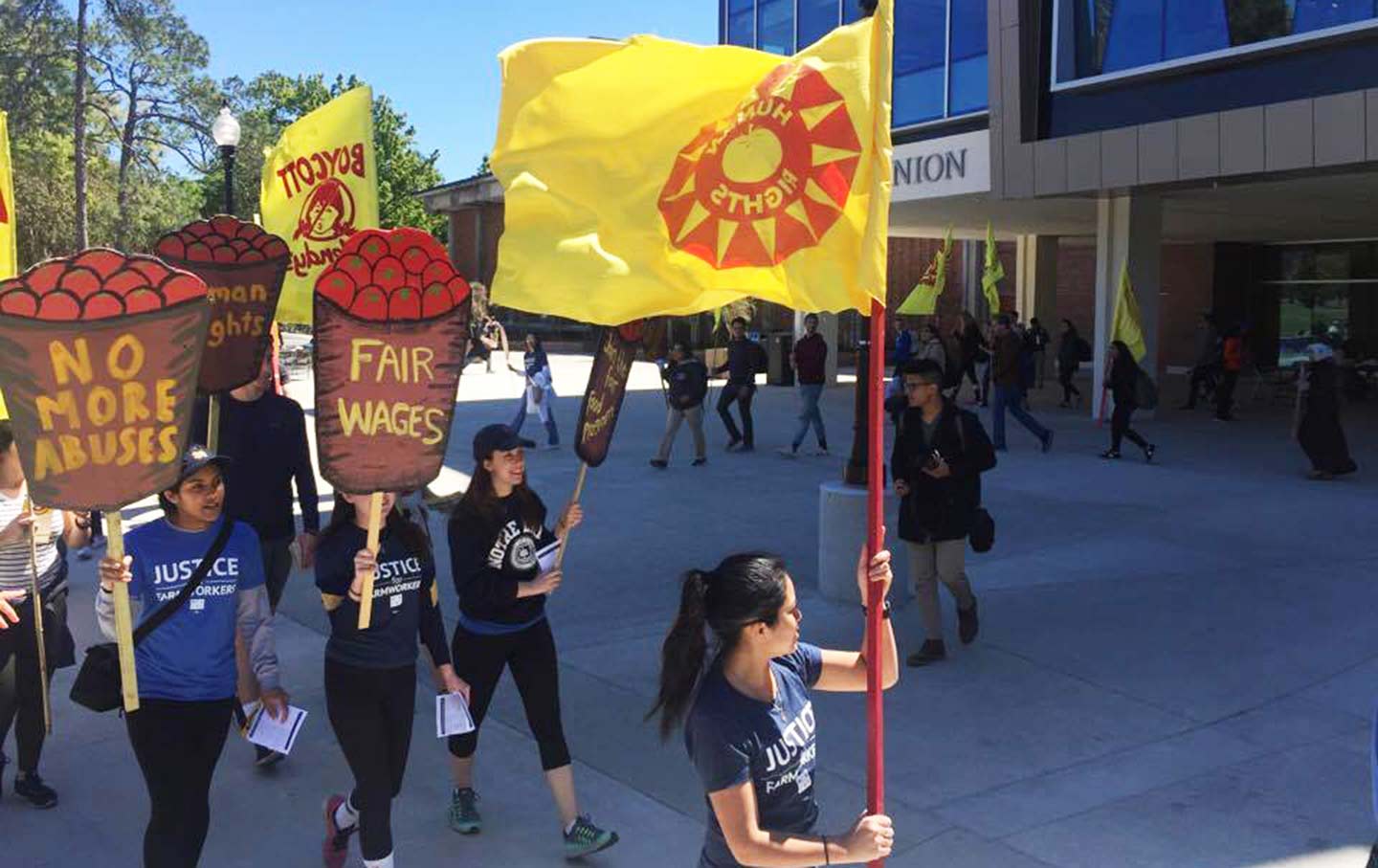 University of Florida students and workers protest against Wendy’s on March 16, 2017. (Molly Minta)

GAINESVILLE, FL—Earlier this month, students at the University of Florida returned from spring break to record-low temperatures and a tauntingly blue sky. On March 16, the rolling green lawn that joins several of the university’s main buildings was filled with students enjoying the weather in warm patches of sun.1

About two miles east, representatives from the Coalition of Immokalee Workers (CIW), a farmworker-rights organization based five hours south of Gainesville, gathered with UF students at Norman Field, an expanse of grass near the area of town where Wendy Thomas, the original Wendy on whom the fast food chain’s logo is based, lived when she attended the university in the early 1980s. With tomato signs and CIW’s signature yellow flags, students and coalition members were gathered for a protest.2

The sound of guitars and chants of “Move Wendy’s, get out the way!” soon could be heard as the protestors made their way through campus. People paused their frisbeeing or studying to locate the source of the noise as the mass of students traveled south toward the student union, home to one of two Wendy’s locations on campus.3

Three years ago, students across the country launched the “Boot the Braids” campaign to pressure Wendy’s into joining the CIW’s Fair Food Program. The CIW has organized to improve working conditions for farmworkers since 1993, and its Fair Food Program (FFP) is a first-of-its-kind model that does just that. The FFP launched in 2011 and originally focused on tomatoes grown in Florida where tomato farm owners and crew leaders were notoriously abusive to farmworkers, and wages were shockingly low. The CIW used public pressure and protests to get major retailers, including Taco Bell, McDonald’s, Walmart, and Subway, to agree to only purchase Florida tomatoes from growers who participate in the FFP. They also agreed to pay one penny more per pound of tomatoes, which would go directly to farmworkers. Florida growers who want to sell to retailers participating in the FFP in turn have to sign on to a farmworker-drafted code of conduct and consent to third-party audits of their working conditions. Since its inception, the program has improved working conditions and resulted in more than $23 million in increased wages. The FFP has since expanded to include tomatoes grown in six other states, and now also includes Florida-grown strawberries and peppers.4

Wendy’s has resisted joining the program from the beginning. After years of protests, hunger strikes, boycotts, and petitions, each of the top five fast food companies have signed on to the FFP except for Wendy’s. In response, the CIW launched a national boycott of the chain in March 2016. As for the student activists, they say their Boot the Braids campaign won’t stop until Wendy’s joins the FFP or is removed from their college campuses.5

The march in Gainesville was the kickoff for a national CIW protest, the “Return to Human Rights Tour,” which concludes today with a vigil in Tampa. Over the span of two weeks, CIW members and their allies have toured cities across the US to mobilize support for the FFP. The CIW partnered with students at Vanderbilt, UNC Chapel Hill, and Ohio State—whose students completed a week-long fast in solidarity—to demand that their administrators pressure Wendy’s to sign onto the program. The 13-stop tour was the longest protest action of the coalition’s Campaign for Fair Food in the past decade, and included a protest in downtown Columbus, a few miles south of Wendy’s international headquarters, last weekend.6

Members of CHISPAS, a UF student organization that focuses on immigrant rights and advocacy, and other UF students have been organizing against Wendy’s since the start of the Boot the Braids campaign. For many of these students, like 20-year-old CHISPAS secretary Lucero Ruballos, the Fair Food Program has directly impacted their lives.7

For a long time, Ruballos’s parents were farmworkers. She grew up near the fields where her parents worked in Plant City, home to Florida’s largest strawberry producer. She remembers seeing her mom work while she and her sister played nearby, but any exploitation was not talked about. It wasn’t until Ruballos was older that she began to understand the working conditions her family faced: “They were exploited just because they were farmworkers,” Ruballos said. “I wouldn’t want anybody to be treated that way, just because we’re all humans. We all deserve human rights.”8

Ruballos, who plans on becoming an immigration lawyer after graduation, grew up close to her aunt. She would go to her house after school, as her parents, who left farmworking for manufacturing jobs, often worked late. She began to notice little things: that her aunt’s skin would gradually darken through the picking season; that she would grow more and more tired in the evenings.9

“When she would get home, she would put an IcyHot pad on her back, and then she would just rest,” Ruballos said. “She had that face of, ‘It was a hard time.’ She was tired, but it was about to be dinner time, and she would have to cook and prepare for the next day.”10

Ruballos was disturbed to learn how little her aunt made—she was barely able to afford her bills. Even more disturbing, Ruballos said, was that it was considered normal.11

Over 90 percent of the Florida’s tomato growers have signed onto the Fair Food Program and farmworkers, including Ruballos’s aunt, have seen their wages and working conditions improve, said Patricia Cipollitti, an organizer with the Alliance for Fair Food.13

“This is a program that’s been working,” Cipollitti said. “Farmworkers know their reality the most. They’re the ones who know what changes need to be made. That’s the key piece of this worker-driven model of social responsibility that works, rather than this top-down model of corporate responsibility, where those who design the audits and the systems for monitoring don’t actually have their eyes and ears on the ground or an interest in enforcing these kinds of standards.”14

Despite this, Cipollitti said that Wendy’s has only become further entrenched in its opposition to the FFP. As a workaround, Wendy’s no longer purchases from Florida tomato growers and has drafted its own code of conduct, which the Alliance for Fair Food called “completely void of effective enforcement mechanisms to protect farmworker’s human rights.”15

In response to Wendy’s entrenchment, the student campaigns have become more complex. This year, Ruballos spearheaded a three-pronged strategy that targeted other organizations on campus for support, reached out to students through marketing and social media, and engaged UF administrators by building up to the march with smaller demonstrations throughout the year.16

Activists face a more complicated challenge at UF than at other universities, however. Because UF contracts with Aramark, one the largest food service providers in the country, and not the individual restaurants, the school says it’s limited in the extent it can pressure Wendy’s to join the program. Aramark itself joined the Fair Food Program in 2010, which according to UF means the two campus Wendy’s are technically under the program’s umbrella.17

“We have to show Wendy’s that there are students in full support of CIW’s Fair Food Program.” — Lucero Ruballos

However, student activists argue that “technically” is not enough. In 2014, for example, one of the farms in Mexico from which Wendy’s sources its tomatoes was fined for mistreating its workers. In 2016, Wendy’s put out a statement in response to the CIW’s national boycott, writing “We are quite happy with the quality and taste of the tomatoes we are sourcing from Mexico.” The activists don’t want Wendy’s benefitting from UF students at all.18

UF’s administration sent a representative to the march who spoke with the activists during the picket outside the student union. He took the letters of support from campus organizations that Ruballos had gathered, but told them what they knew they were going to hear: It’s Aramark, not UF, who can bargain with Wendy’s.19

Though several members of CHISPAS are optimistic they will get an official meeting with the office in the near future, to many others the mid-protest conversation was unsatisfactory. When Lupe Gonzalo, one of the farmworker activists, told the protesters the representative’s response, they booed.20

“I feel like UF’s administration doesn’t really care about its students,” said Mustafa Hammad, a member of another student group in attendance, the Radical Student Alliance, who spoke with the university representative. “I feel like as long as they get their funding, and as long as they get a certain amount of money from donors, they shut out their students. Their constituency is white students.”21

UF’s administration might be resistant to listening to CHISPAS, but the students believe their fellow students are increasingly paying attention. During the protest, students marched through Turlington Plaza, UF’s free speech zone, where it’s common to be bombarded with solicitations and flyers. They’re usually crumpled up or discarded, but when the protesters passed out their own bright yellow flyers, students stopped to read. Some even asked questions and wanted to know more. One admitted he didn’t like Wendy’s and appreciated another reason to not eat there again. But to the protesters, the movement is more than just one campus protest. The CIW has even set up a system of caravans to truck Florida students and protesters to the next stop and onward.22

“It’s not just the march,” said Ruballos. “It’s an ongoing process…We have to show Wendy’s that there are students, there are people and community leaders, that are in full support of the CIW’s Fair Food Program, that are not letting inhumane [practices] get in the way.”23