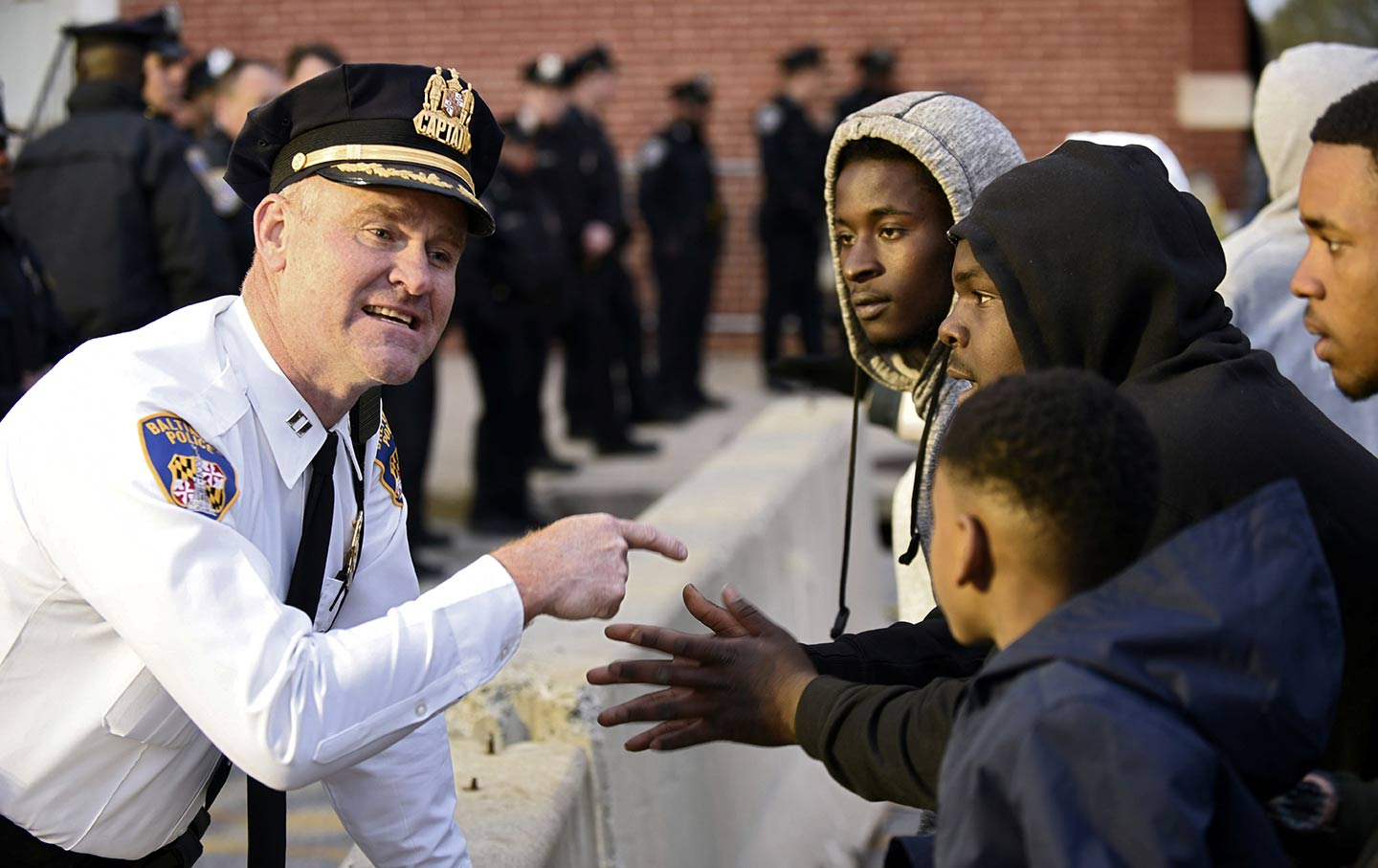 Catherine Palmer was already a seasoned student journalist at The Johns Hopkins News-Letter when Freddie Gray, a Baltimore native and black man, died in police custody, provoking protests across the city that swelled into what would be called the Baltimore Uprising. Even so, she was only 19 when she found herself one of the first reporters on the ground at a pivotal moment in April 2015, thrust onto the scene to cover the peaceful protests and outpouring of emotion in the wake of Gray’s death.

By the time the national news media swooped in to sensationalize the Uprising’s rare violent moments, Palmer, now the paper’s managing editor, and her co-editors had already decided to focus on what many students and the community members valued: the peaceful protests, the prayer circles, and the burgeoning significance of the Black Lives Matter movement. As a local student with local ties, Palmer’s experience made her significantly more prepared to cover the Uprising than the national reporters sent from newsrooms states away.

The story, Palmer thought, was really the local issues Baltimore residents faced every day, struggles that were at the core of the protests: structural racism, limited access to good housing and food, and a failing school system. “That was definitely not the type of thing that ABC or CNN was going to be reporting,” she said. “All of us didn’t really know how big it was going to be at at the time…. I was already pretty invested in it when the news broke, and it got so much bigger.”

Since then, the journalists at the News-Letter, Johns Hopkins University’s independent student newspaper of which I was editor-in-chief until May, have not stopped exploring the aftermath of the Uprising and the explosion of activism at Johns Hopkins and in Baltimore. After the national outlets packed up and went home, we’ve gone on to unearth residents’ concerns over the ongoing gentrification in a neighborhood directly south of campus. Our reporters have also closely followed a recent labor dispute between Johns Hopkins University, a predominantly white and wealthy institution, and contract dining and security workers, most of whom live in the predominantly black, working-class communities most affected by structural racism.

Student journalism has gained new importance in the face of the deep decline of local news. With the collapse of print advertising in the past 20 years, hundreds of local newspapers have closed and over 20,000 journalists have lost their jobs. At the same time, student journalists at colleges around the nation have felt the pressure of tightening budgets and hostile university administrations.

But student journalists are uniquely positioned to fill the hole created by the decline of local news. When major news explodes on campuses and nearby communities, student journalists like Palmer are often the first on the scene. In the hours before national reporters arrive, student journalists have already filed a story and are often working on the next. Journalists from the national media are often parachuted into hot spots to cover communities with which they have no connection. They scramble and latch on to the sensational narratives that focus on violence and the most extreme elements.

As a reporter in Baltimore, I quickly realized that native Baltimoreans were far more receptive to talking to local reporters, even if they were students. As privileged student journalists, we may not have personally experienced the structural racism, entrenched poverty, and police violence that catalyzed the Uprising. But we’re part of the community. Students and residents have helped each other dig their cars out of piles of snow, attended community meetings to demand a living wage and health care for campus workers, and volunteered at the same local food banks to serve those experiencing homelessness. Many student journalists become permanent residents of their communities, and they care about their neighbors.

Colleges in rural America have long been covering the local anxieties that, thanks to the national rural coverage gap, masked Trump’s rise. Student journalists at the University of Iowa’s paper The Daily Iowan recently covered a Trump speech and spoke with voters, one Iowan to another. The paper’s editors have created spaces, increasingly rare, where students on both sides of the political divide can enter into sane dialogue. In West Virginia, Marshall University’s student newspaper, The Parthenon, has consistently covered the opioid epidemic, which has ravaged rural communities across the United States. It has highlighted bills introduced by Senator Joe Manchin to fight the epidemic, taught the student body about naloxone, which reverses the effects of an opioid overdose, and published editorials exposing the ease with which students can access prescription drugs.

Journalists on college campuses are uniquely positioned to cover emerging social movements and to translate what young people are thinking to an older audience. In the aftermath of the election, an outpouring of social activism gripped the United States, especially among young people. Johns Hopkins saw dozens of protests calling for divestment from fossil fuels, better health care for graduate students, and an explosion of anti-Trump resistance. Like student newspapers across the country, the News-Letter was frequently the first to record these new forms of activism.

Student journalists are working hard to fill gaps in local coverage, so why haven’t major media outlets made a serious effort to work with and support them? Creating long-term ties between major news outfits and student news organizations would do more than help plug the ever-widening coverage gap—it would help train the next generation. Short-term programs like The New York Times’s Student Journalism Institute and professional development seminars and conferences that publications like the Chronicle of Higher Education and The Nation host are great, but they’re not enough. With slashed budgets at school-sponsored newspapers and the decline of advertising revenue hurting independent outlets, these partnerships make sense for student newspapers, too.

There are many ways these partnerships could look: Whether directly publishing students’ stories on their websites, paying student journalists to cover breaking news, or providing mentoring and training, national news organizations have a role to play.

Palmer argues that student journalists understand what’s happening on college campuses and what young people value better than anyone else. The major media should take advantage of that expertise. “When they bring guests on the major news networks, it’s always the same kind of people with a million degrees, and they’re just giving their talking points that they’ve rehearsed,” she said. “It would be a good idea to get younger voices on the air. They shouldn’t have just one point of view.”

Some commentators, like the Nieman Journalism Lab’s Joshua Benton and The Atlantic’s Derek Thompson, have argued that local news seems to be irreversibly moribund, but they have overlooked in their otherwise apt analyses the incredible work done by student journalists. As the news industry becomes increasingly concentrated in major metropolitan centers, creating partnerships with student journalists should be a key aspect of a national organization’s strategy to cover the rest of the United States. Believe me, student journalists are ready.