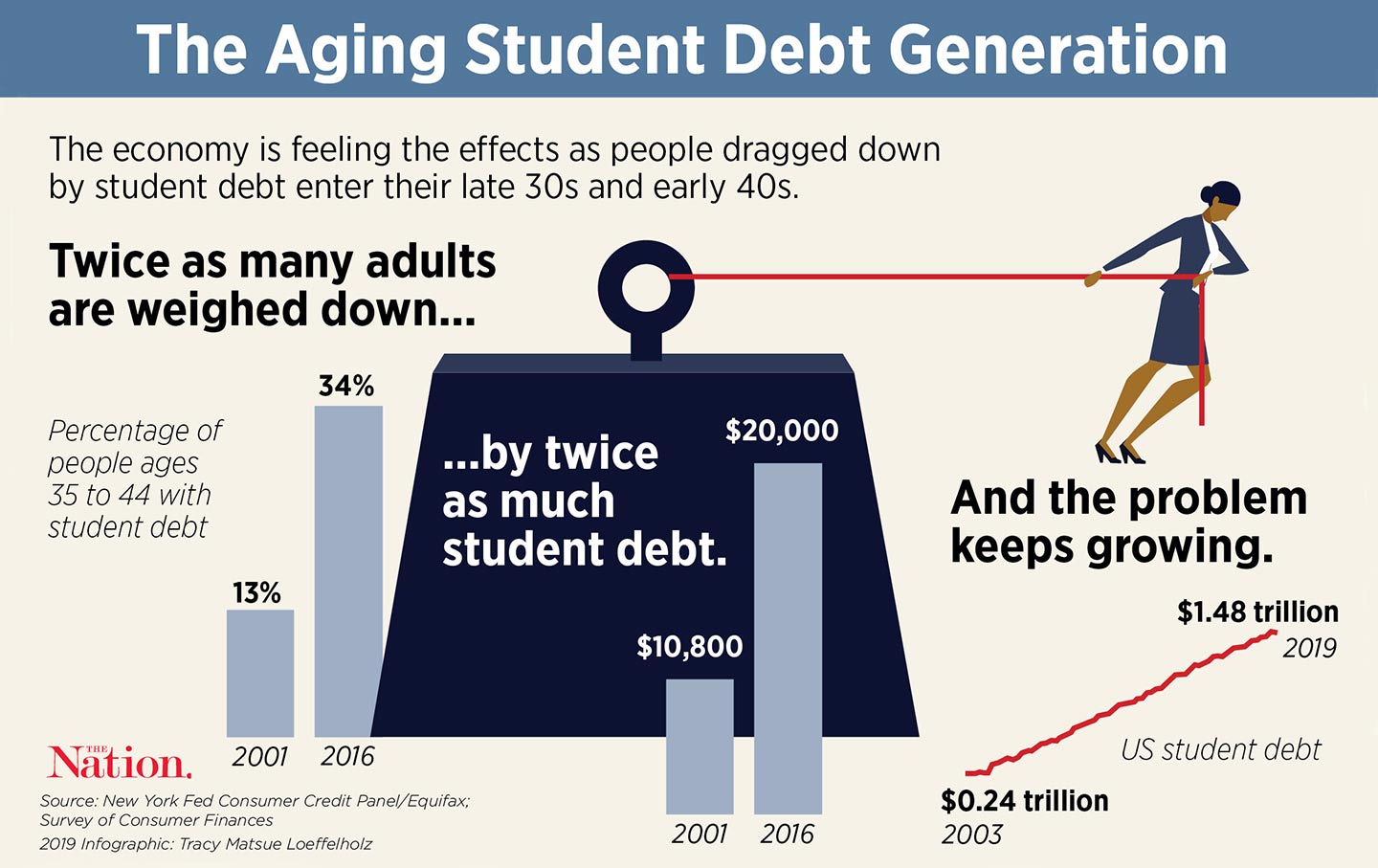 Student debt is transforming the lives of young adults, and the evidence of its damage is piling up. Student debt drives people away from public service jobs toward higher-paying ones with no civic purpose. It is linked with lower rates of entrepreneurship, which is deadly for our economy that already has too few new businesses. And it is associated with a delay in all kinds of markers of adulthood: buying a car, purchasing a home, even starting a family. As the number of people carrying student debt into their late 30s and early 40s increases, these effects will drag on, with ripple effects across the economy.

But student debt affects not just the student debtors themselves. It is reworking the lives of parents and families. In her new book Indebted, economic anthropologist Caitlin Zaloom follows dozens of middle-class families as they navigate the massive industry of college aid, financing, and debt. She discovers that many of them end up trapped between what they feel is their moral obligation toward higher education and their financial reality.

Like all American families, the parents in Zaloom’s book want to ensure that their children have opportunities to be independent adults. But in order to achieve this, families feel they must go into debt, often endangering their place in the middle class. With college, parents are often making a risky gamble that a large investment today will give their children a comfortable life in the future.

There Are Too Few Companies and Their Profits Are Too High

If the Filibuster Remains, the Progressive Agenda Is Doomed

When college was free or at least widely affordable, none of this was necessary. Now most middle-class families require financing to send their kids to college. This takes the form of borrowing against future earnings in student loans and saving current money in tax-deferred private accounts like 529s for future use. Using finance to fund higher education has exacerbated inequality and leaves behind those most vulnerable. This is well understood when it comes to private savings accounts, the tax benefits of which accrue to those with higher incomes.

But there’s a more subtle way that finance hinders working- and middle-class aspirations. Moving money through time with finance presumes a stable and predictable income and life that isn’t available for most people. Borrowing against future earnings assumes that money will be there; saving now assumes more urgent needs won’t arise before then. These savings can be eaten away by illness, disability, addiction, divorce, or any number of other ways things can fall apart.

The Free Application for Federal Student Aid (FAFSA) process also takes for granted an idealized family structure, one in which parents openly discuss money between themselves and with their children. The FAFSA requires students to get documents from parents who may not be interested in providing them. When students are audited for financial aid, Zaloom finds, some parents don’t want to participate in the scrutiny of their finances.

The FAFSA also decides who is and isn’t counted as family. It considers the family two parents and the children who depend on them. But many families don’t fit this model, and the ones that do conform tend to be wealthier. In reality, parents may have other family costs; they may help pay for the health care of a cousin or the education of a niece. That means when it comes to student aid, families that don’t match the nuclear standard get punished financially.

In all this, there’s a clear political ideology at play. Former British Prime Minister Margaret Thatcher famously said in response to whether society has an obligation to solve problems, “There is no such thing [as society]. There are individual men and women, and there are families.” The last part of this quote is often forgotten, but it is key to understanding modern conservatism, which believes that the family unit should be the primary place to handle risk. This is the opposite of how the left has understood this. One of the core arguments for the creation of social insurance was that it is difficult for individuals and families to save against all the possible risks in life but that in aggregate these numbers are predictable. Socializing this risk creates the freedom for people to start businesses or invest in their family or do any of the other things they want to do. The burden of student debt on the family is new, and it’s not inevitable. By socializing the cost, we can upend the system: It’s time to enact free college and wipe out student debt.