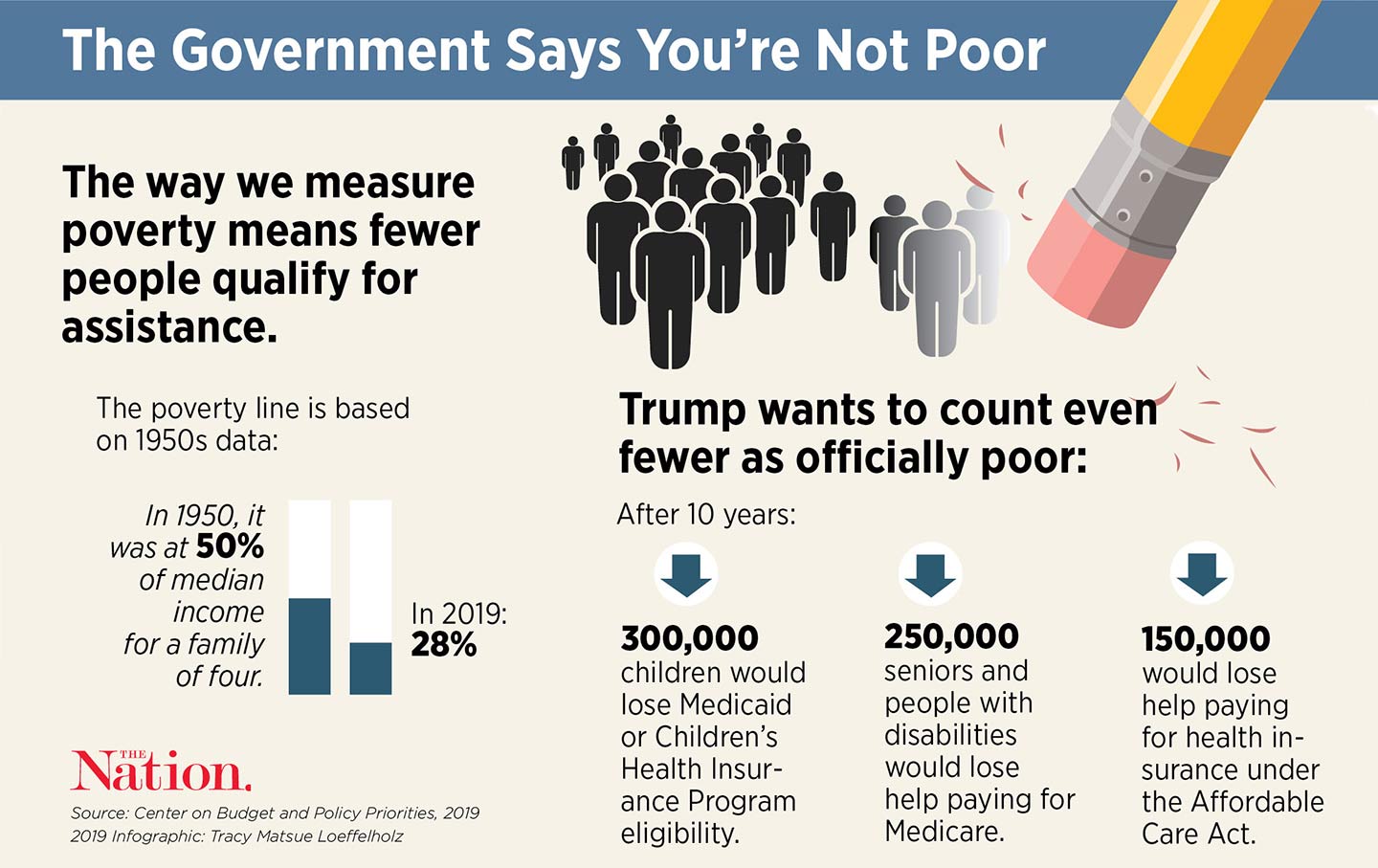 Donald Trump, who has long played fast and loose with measurements of his wealth, is no fan of numerical accuracy. But his administration’s latest move to monkey with economic data could have a devastating impact on the poor.

The change is technical: The White House proposes to use a different definition of inflation to update the income level below which the federal government says someone lives in poverty. Right now, a family of four must have an income of $25,750 or less a year to qualify as poor. Instead of using the Consumer Price Index to update that figure, the administration wants to use the Chained CPI, which, rather than measure the price of a fixed set of goods, tries to factor in shifts to cheaper options as prices change.

In Defense of the Much-Maligned IRS

If the Filibuster Remains, the Progressive Agenda Is Doomed

Boring, right? Except that the official poverty line determines who is eligible for public benefits like food stamps, Head Start, the Children’s Health Insurance Program, parts of Medicaid, and a variety of other programs. The Chained CPI rises more slowly than the regular CPI—ignoring the fact that poor families usually face sharper price increases and have less room to economize their choices. At first, the difference might not be huge, but it snowballs. Over a decade, using the Chained CPI would mean more than 300,000 children would lose access to Medicaid or CHIP and more than 250,000 seniors and people with disabilities would lose help paying for Medicare health coverage. Millions fewer people would be able to take advantage of lifesaving programs.

This is not to say that the way we measure poverty now is working. The current standard is based on a 1955 survey of household consumption, which took a subsistence food budget for a family of four and multiplied it by three to account for the fact that the average family at the time spent a third of its income on food. This is the number that gets increased every year to keep up with inflation.

To say it’s outdated is an understatement. According to Rebecca M. Blank, a former senior fellow in economic studies at the Brookings Institution and now the chancellor of the University of Wisconsin–Madison, no other economic statistic uses such antiquated data and methods. Today, a typical family spends a lot less of its budget on food than families did in the 1950s. At the same time, other important costs have skyrocketed, such as housing, health care, and child care. Thus, the poverty line ends up being unrealistically low: In the 1960s, it fell at 50 percent of the median income for a family of four; now it’s at 28 percent. That means a whole lot of people have too much money to be officially poor but still experience deprivation.

The Trump administration isn’t proposing to fix this. It wants to water down the definition of poverty so that fewer and fewer people fall under it. It denies this country’s reality, in which more than 15 million experience periods when they can’t afford all the food they need.

This is not the first time his administration has tried to use revamped poverty measurements to promote its goals. Last year, the Council of Economic Advisers released a lengthy tome arguing that poverty should be measured by what families spend, not the money they have, as the Census Bureau currently does. This, too, would significantly decrease the number of people counted as poor.

At the time, the change was proffered in support of the idea that poverty had been all but eliminated and that the real problem we face is too many people on public benefits refusing to work. It was an attempt to build support for adding punitive work requirements to a universe of programs, from Medicaid to housing. But that agenda stalled. Congress did not add stricter work requirements to food stamps. No legislation has moved on housing. And judges have so far blocked the work requirements that some states imposed for Medicaid.

The appeal of the administration’s latest move, then, is that it can achieve a similar goal—fewer people getting public benefits—all on its own, without attracting attention because it’s so arcane. But make no mistake: A bureaucratic change like this is designed to deny help to the poor.