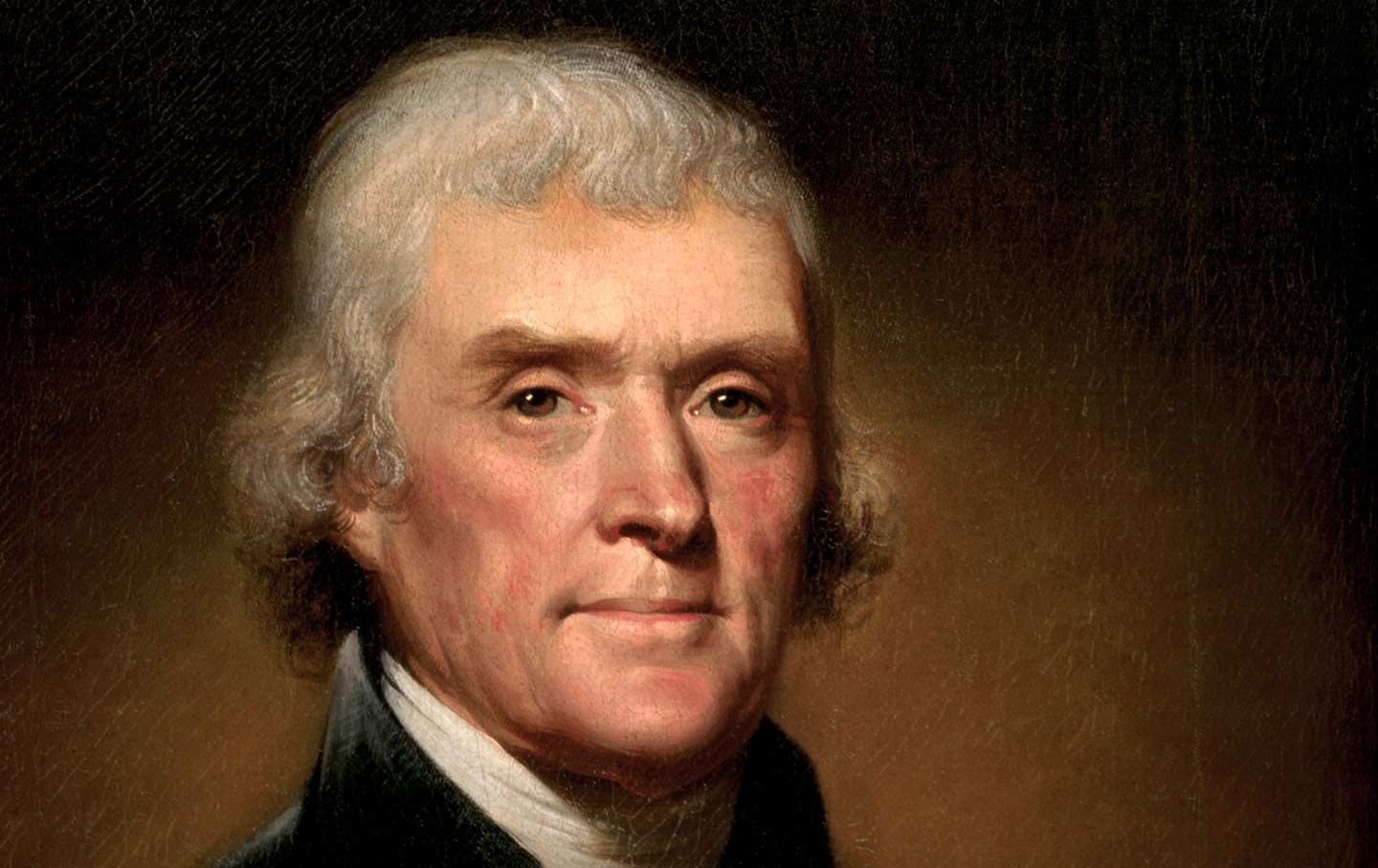 Portrait of Thomas Jefferson by Rembradt Peale in 1800.

It starts with a disembodied refrain: “I will make it good.” A few pages later, the line comes back with a twist: “I will make it good… I will be gentle.” These lines echo through Stephen O’Connor’s recent novel Thomas Jefferson Dreams of Sally Hemings. It tells the story of Thomas Jefferson’s life through his imagined dreams, his relationship with his slave Sally Hemings, and through discontinuous vignettes. It’s a novel with epic ambitions but limited scope. That refrain—“I will make it good… I will be gentle”—makes its most chilling appearance when Jefferson appears at 15-year-old Hemings’s bedroom door and proceeds to sexually assault her.

O’Connor presents this rape in a way that is at once vivid and detached. “He is standing beside the bed, tearing at the buttons on his breeches. She knows what is going to happen. It cannot be possible. But that makes no difference. It is happening. It is inevitable. And there it is. Like a club sticking out of him. Like a skinned fish. Like an enormous mushroom that is practically all stem.” O’Connor conveys Sally’s terror by showing the way her body goes rigid. It’s a feat of imagination, sure, and it shows that O’Connor is interested in representing the trauma and sadness of sexual violence. But it’s also gratuitously detailed, even prurient, in a way that serves to obscure the characters, not sharpen our view of them. Many people believe that sex between a slave and a master is always rape. Others believe that such a stance denies those women agency, even if they were making decisions within a dehumanizing system. O’Connor is looking for a middle ground. He condemns Jefferson for his transgressions, but tenderly illustrates the relationship that evolves thereafter.

O’Connor imagines Jefferson and Hemings’s inner lives with verve, through poetic and weighty dream sequences, and the pair work as ideas or symbols, but rarely appear as fully realized characters. Throughout the book, the narrator refers to the main characters as “Sally Hemings” and “Thomas Jefferson” every time they are mentioned, keeping them at a distance. They come to be like allegorical figures, never really moving through the world. They are corporeal only when they have sex. And when writing Sally’s diary entries or describing life at Monticello, the narration, which is sometimes slippery and contemporary, becomes more like a straightforward work of historical fiction, given over almost entirely to spare setting description and letting the story unfold through dialogue.

This is Stephen O’Connor’s first novel, but he’s been writing short stories for decades. And the novel proceeds a bit like his short stories: breezy prose that fuses a concise and self-effacing narrator’s descriptions with a character’s own assessments; a contrast between truncated sentences and flowing, rhythmic ones. O’Connor’s austerity makes even the most realistic events seem a bit like a fairy tale, and this is both a blessing and a curse for his portrayal of Jefferson.

Indeed, anyone who writes about dreams in the 21st century has to contend with two giants of the 20th: Sigmund Freud and Martin Luther King Jr. Freud developed his theories on the significance of dreams during long hours spent listening to his patients’ retelling on the couch. These dreams are individual, ways that psyche and desire manifest themselves. They are immaterial—they’re only as real as your trauma, your wound. King’s dreams were born of hours spent studying the Bible and American history. These dreams are collective, ways that people learn to sacrifice their own pleasure, comfort, or bodily integrity for the sake of a greater good. They are more material, but they’re only as real as the actions you take to move toward them.

Literature about American slavery has tended toward a consideration of King’s kind of dream to the exclusion of Freud’s, and invited a real critique: If we think of the collective suffering of slaves as a moral toil meant to deliver us to a more peaceful and just nation, we efface their real suffering and the generational harm that hasn’t been repaired. Toni Morrison’s Beloved stands out as a book that uses both modes of dreaming to great effect: Sethe weighs her individual heavy conscience alongside the collective trauma of slavery, and ghostly Beloved serves as an uncomfortable manifestation of that pain.

Thomas Jefferson Dreams of Sally Hemings seems to be reaching for this fusion. Historians have noted a near-complete lack of information about Sally, and historical fiction is frequently occasioned by historical absence. Storytelling can act like joists to hold the few facts we do have together, make them more logical, meaningful, and real. Thomas Jefferson Dreams of Sally Hemings has a conceit: What if Thomas Jefferson felt a strong love for Sally Hemings? What if the things that transpired between them would be legible as a 21st-century love affair? It enacts that conceit aggressively and graphically, and instead of being fueled by interplay between Jefferson’s desires for Sally and his slaves’ desires for freedom, the book focuses primarily on dreams in Freud’s sense. Jefferson’s dreams appear as a vehicle for manifesting his own psychological state, and the book is fetishistic in its concern for him, to the exclusion of drawing a full portrait of Sally. O’Connor hints at a complex personality that all but falls away as she ages. He goes to great lengths to portray her as an actor in a tale of romantic entanglement, but it doesn’t congeal because we know how common this dehumanizing practice was during slavery. Masters frequently copulated with their slaves, and there is a long lineage of Americans, who can either pass in the white world or remain in the black one, to show for it. Turning this reality into a historical novel poised for epic love neuters it of its commonplace horror.

The most moving parts of the book come when O’Connor eschews the historical-fiction mode and indulges in more creative reveries. There’s a recurring scene where a modern-day Jefferson sees a modern-day Hemings on the subway and watches her face fill with fear when the train screeches to a halt and the lights flicker on and off, though he never speaks to her. Later, we meet a group of 21st-century New Yorkers, consumed with their own romantic struggles, writing a script for a movie about Jefferson’s life. One of these characters serves as a mouthpiece for the paradox that lies at the heart of the book: “‘But Jefferson’s our protagonist. Who’s going to want to see a movie about a slave-owning, slave-fucking hypocrite who’s also a total coward? We’ve got to give the audience something to hang onto here.’” Later we see Thomas Jefferson watching the movie with James and Dolly Madison. He’s aghast at the bad wig sported by the actor who plays him.

Three-quarters of the way through the book, there’s a scene that should represent the book’s moral climax: Thomas Jefferson has recently died, and all 600 of the slaves he kept at Monticello are going up for auction. The vast majority of the slaves being auctioned are not characters we’ve seen before, and the book doesn’t provide context for how unpleasant their futures will be under the auspices of new masters. It’s a bloodless depiction of a tragedy. The slaves feel like decoration for so much of the novel, making it easy for a reader to tell which questions occupied O’Connor and which served as only as a backdrop. Even as it condemns Jefferson for his immoral conduct, Thomas Jefferson Dreams of Sally Hemings still holds him up as a hero. His actions are the driving force of the book. In the end, the title says it all: Our founding father is the subject; his slave is the object.