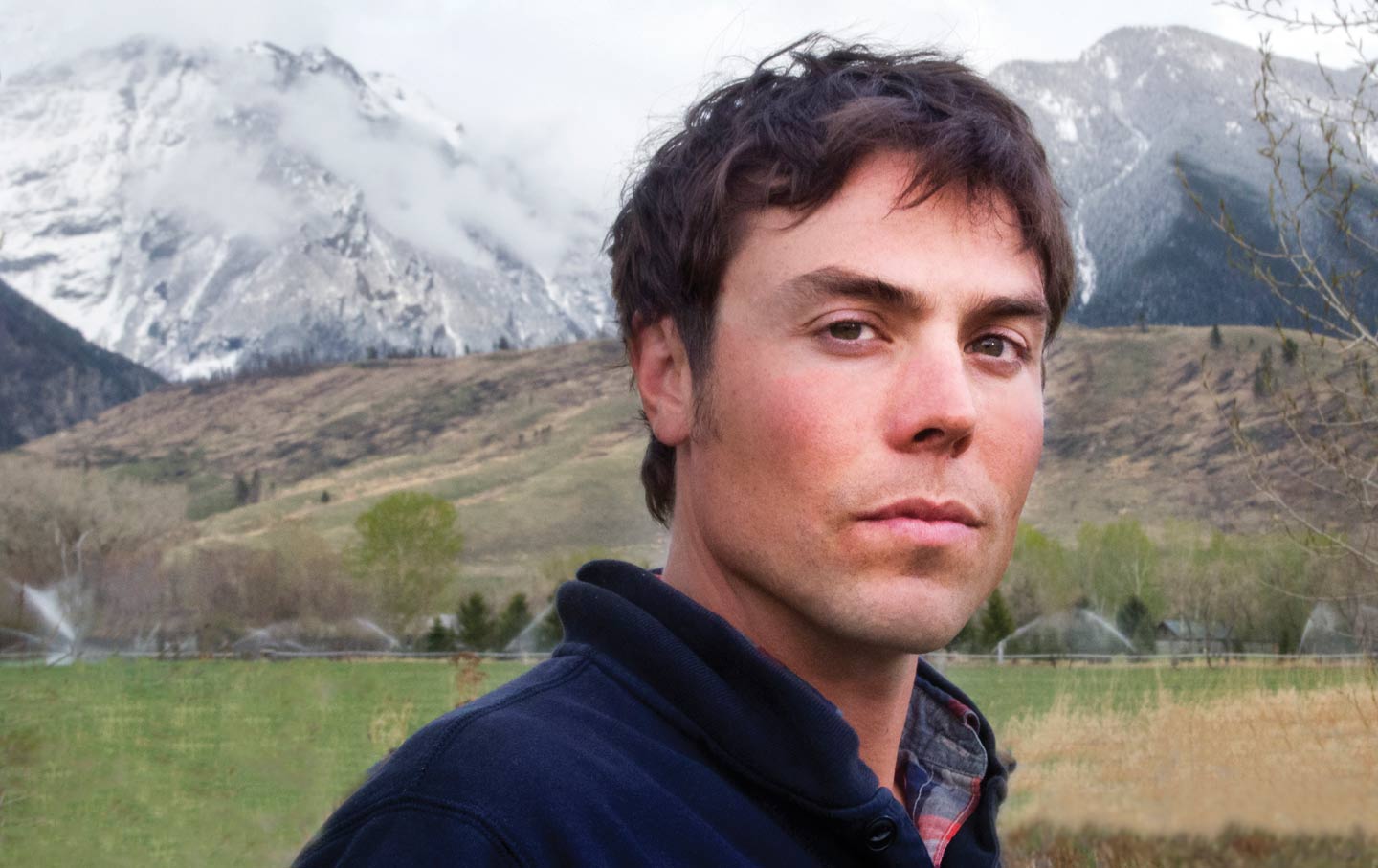 Short stories live and die on images. A novel can spend a few dozen pages warming up, but a short story has to signify right out the gate. And it’s hard to think of an image more stark than what Callan Wink proffers in the story “Dog Run Moon”: a naked man runs through a mesa at night with a mangy dog by his side. The scenario that sets the run in motion only deepens the absurdity. Sid, the naked man, is running from an ATV driven by local businessman and villain Montana Bob with his sidekick and accountant, a man named Charlie Chaplin. The dog was not stolen from Montana Bob; it was “liberated.” It’s fitting that this story gives Wink’s collection its title: a coupling of manic energy and emotional introspection drives all of these tales from the down-and-out 21st-century West.

Dog Run Moon (Dial Press; $26) is the first book by Callan Wink, a young author who is a product of the American frontier. Wink, however, is more interested in craft and the human proposition than in the presentation of a certain set of customs—though he’s got that down, too. In his best stories, Wink’s structural decisions guide you. For instance, Sid never really reveals his motives, other than a vague sense of justice, but the narrator parcels out illuminating information in the story’s interstices: a gruesome industrial accident, which leaves him splattered with a coworker’s blood, and the woman’s answering machine he litters with pleading messages illustrate Sid’s impotence and desire for control. The run represents a breaking point for him.

Admirably, Wink doesn’t mystify the West as a place where pure living just happens. The stories focus on working-class men, women, and children who are frustrated by interpersonal relationships, the economy, and their dwindling physical and cultural inheritance. His characters are defined by their banal daily routines: milking the cows, making breakfast, going to a menial job; they are just trying their hardest; they’re neither truly good nor evil. In that way, and in his twin embrace of silliness and sadness, Wink’s work is just as reminiscent of George Saunders and Don DeLillo as it is of other writers from the American West like Annie Proulx and Raymond Carver.

In several stories, Wink uses rural life to scrutinize the ideals of masculinity found in the fantasy of the West. Seemingly detached or cold men telegraph their emotions in surprising ways. A father promises his son a dollar per cat he kills in the barn, and otherwise ignores him completely. An adult son throws a temper tantrum and murders a steer when his father decides to share his inheritance with a new wife. The development of a male-to-male relationship through outdoor activity is most powerful in the story “Off the Track,” which details a young adult’s imprisonment for a violent crime and its effect on his family. Terry feels a kinship with his grandfather, who taught him how to fish and used quiet time on the boat to discuss their shared nature: hair-trigger tempers and a lack of tranquility. On solitary boat trips after his release from prison, however, Terry’s interior life comes alive through Wink’s narration. “Terry found that if he tilted his head back, he could look up into a fathomless universe of blackness, a starless sky so immense that it seemed to pull at his eyes,” he writes. The protagonist senses something dark inside himself that starts to feel foreign and primordial. “It was like his pupils were made of this same dark matter—broken obsidian shards of it—that he’d been carrying around with him his whole life as if they were his own, only to find out they were borrowed and now their true owner wanted them back.” They’re the musings of any stoned teenager, made eloquent and weighty by the plot that brings them forth. The crime Terry has committed is atrocious, and Wink does not shy away from depicting it all. It’s clear Terry doesn’t understand why he did it, but in “Off the Track,” he’s trying and maturing. In Terry’s inner monologue, and throughout the book, Wink takes the emotional lives of his characters seriously and gives them an articulacy they might not display on their own.

Callan Wink’s work is as reminiscent of George Saunders as it is of other American West writers like Annie Proulx.

Gruesome or hideous acts of violence are central to many of the stories, but they don’t represent the type of allegorical violence that you see in, say, Cormac McCarthy’s depiction of the Old West. The violence here is startlingly commonplace: domestic disputes, bar fights, workplace tragedies. Rather than using violence to symbolize the presence of evil, it reflects the pervasive randomness of tragedy in the 21st century: that grim pessimism that drives some to become Trump voters and others to become opiate addicts. In one story, “Sun Dance,” the tragedy occurs early on. Depressed, middle-aged Rand forces a few undocumented employees to work on Thanksgiving by threatening to report their immigration status. When they are discovered dead of carbon-monoxide poisoning the next morning, he is forced to grapple with his role in the tragedy, and the reader watches him decide how much blame to accept. Wink is interested in something more than simplistic empathy or moral education. Disaster strikes everyone, even those who are right living.

Seven of the nine stories have been published previously, yet they benefit from being collected. Together, they work to establish a cosmology, an explanation of how and why people forge ahead through difficult circumstances. Coffee, illicit sex, and land maintenance occupy the role public Christianity might have in an older, more idealistic depiction of these lives: sites for the ritual transmission of values, methods for finding shelter in unyielding times.

“Runoff,” one of the new stories here, contains the elements that make Wink’s fiction work: engaging characters, lingering images, meaningful structure, and a coup de foudre. Twenty-year-old Dale meets divorced mom Jeanette and they engage in a sort of May-October relationship. He takes on a surrogate-parent role to her two young sons: preparing the house for a flood, making the boys a surreptitious cup of coffee, and teaching them to drink it. The story pivots to Dale’s relationship with his own father and his aspiration to become an EMT once he can pass the tricky licensing exam. Talk of the potential flood carries on. More cups of coffee are consumed. An upending moment of violence occurs. It passes in an instant. In the end, Wink shows you where to focus: on the children, on the father, on the way melting snow feels like tears on an old man’s face.