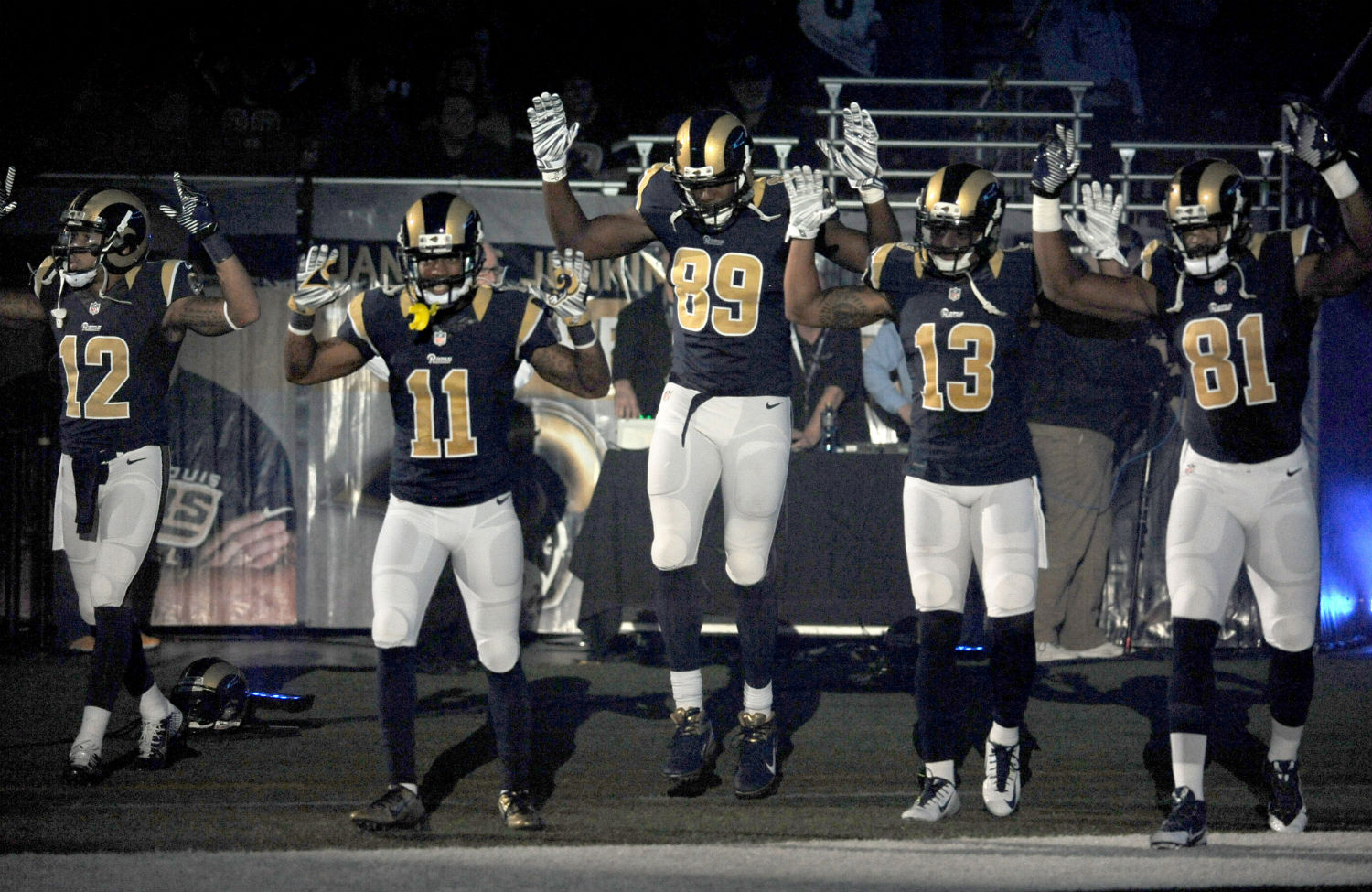 Members of the St. Louis Rams raise their arms in a “hands up” gesture to acknowledge the events in Ferguson. (AP Photo/L.G. Patterson)

Anytime someone says that pro athletes should just “shut up and play,” remind them that at every moment of every game “play” is only a small part of what they are actually doing. Instead, their number-one job is being a product. They are the product, selling the righteousness of their global sports brand. They are the models, selling the Nike swooshes that adorn their uniforms or the Gatorade they pour down their throats. They are selling, with each adrenaline pumping play, the myth that spending a billion dollars on this new stadium was a fine investment. They are also often asked to hawk whatever war is under way, their play a glamorous stand-in for blood on faraway battlefields. When fans and the media say to athletes with opinions, “Shut up and play,” they are really saying, “Shut up and sell.”

That is why it was so important, so daring and so transgressive for several members of the St. Louis Rams to show up at their home field to try to sell the idea that black lives do in fact matter. It started before the game, when wide receivers Kenny Britt and Tavon Austin came out of the tunnel with their hands up, in the now internationally recognized “hands up don’t shoot” gesture in solidarity with the family of Ferguson’s Michael Brown. Then Stedman Bailey, Jared Cook and Chris Givens joined them. Later, running back Tre Mason put up his hands after scoring a touchdown. (The fact that Tre Mason is the son of DJ Maseo from De La Soul is worth mentioning if only to point out that the political reach of golden-age hip hop lives on.)

After the game, Britt said, according to the Associated Press, “I don’t want the people in the community to feel like we turned a blind eye to it….What would I like to see happen? Change in America.” He also posted this picture to Instagram of his arm-wraps, with messages of solidarity for Michael Brown written upon them.

Britt wasn’t alone. Cook was challenged by one member of the media who asked why the team hasn’t gone to Ferguson to protest, if they are so serious about it. His answer was honest. He said, “It’s kind of dangerous down there, and none of us want to get caught up in anything…. It takes some guts, it takes some heart, so I admire the people around the world that have been doing it.”

Not surprisingly, the backlash against these actions was flying fast and furious, but not only in the sewers of social media or the right-wing blogs hard at work scouring the web for the arrest records of Britt and other Rams players. The more ominous response was from the St. Louis Police Officers Association, which “condemned” the action and promised an organized response against the NFL, the players and the team. It also released a statement demanding punishment for those who took part in the action, calling it “tasteless” and “offensive.”

As for social media, the ugliness was on full display. The most common theme, beyond the racist baiting and vitriol, was some form of “If Michael Brown only had his hands up, none of this would have happened.” The fact that sixteen of eighteen witnesses say that he in fact did have his hands up has no bearing. They received the ruling that they wanted and nothing is left to do other than slander the dead.

Meanwhile, as players made their gesture inside the stadium, the organization Lost Voices was protesting on the outside, chanting, “No football, no peace!”

I spoke with Charles, one of the protesters, and he said, “It was beyond heartwarming. Protesters erupted in cheers when I showed them the picture of Rams players with their hands up. They are now true ambassadors of a city and country that is in great pain, but refuses to stop fighting for justice.”

But let the last word go to another athlete who made a gesture on the field for the ages, Dr. John Carlos. In 1968, Dr. Carlos, along with Tommie Smith, famously raised his fist in Mexico City in the name of human rights. I spoke with Dr. Carlos today and he said, “How about those Rams? They may be under contract to play football, but greater than that, they have a right to care about humanity. They have the right to feel whether something is just or unjust. They are entitled to their opinions, most centrally that Michael Brown’s life should not have been taken. Asking them to just ‘shut up and play’ is like asking a human being to be paint on the wall. They have the right to say what they feel in their heart. A lot more athletes need to step up and speak up as well. These atrocities have been going on and we are saying enough is enough. I remember saying in 1968, you think I’m bad, just wait until this new generation comes out. I feel like that new generation is here at last.”