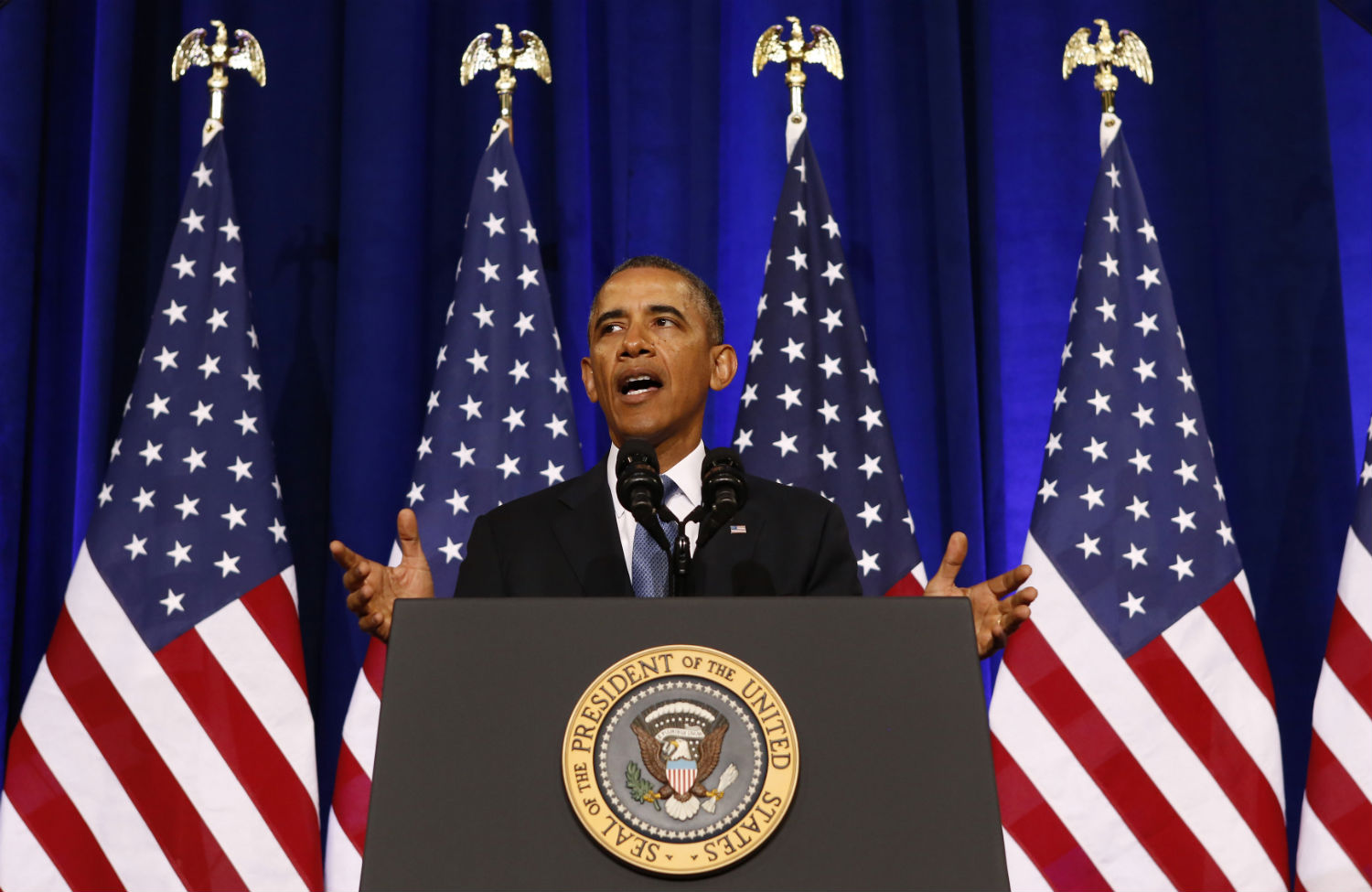 President Obama speaks about the NSA from the Justice Department on January 17, 2014. (Reuters/Kevin Lamarque)

Late Wednesday afternoon, a White House pool reporter asked President Obama about the explosive allegations made by Senator Dianne Feinstein on Tuesday morning that the CIA was spying on, and removed documents from, congressional staffers who were investigating Bush-era torture.

The question came during a brief media availability at a White House event on women and families. Obama’s response, in full:

The first day I came into office, I ended the practices that are subject to the investigation by the Senate committee, and have been very clear that I believed they were contrary to our values as a country. Since that time, we have worked with the Senate committee so that the report that they are putting forward is well informed and what I have said is that I am absolutely committed to declassifying that report as soon as the report is completed. In fact, I would urge them to go ahead and complete the report and send it to us and we will declassify those findings so that the American people can understand what happened in the past and that can help guide us as we move forward.

With respect to the issues that are going back and forth between the Senate committee and the CIA, John Brennan has referred them to the appropriate authorities and they are looking into it and that’s not something that is an appropriate role for me and the White House to wade into at this point. But the one thing that I want to emphasize is that the substantive issue, which is how do we operate even when we are threatened, even when even gone through extraordinary trauma has to be consistent with the rule of law and our values. And I acted on that on the first day and that hasn’t changed.

About 95 percent of Obama’s remarks involve declassifying the 6,300-page Senate report on “enhanced interrogation” by the CIA, and he restates his desire to have the report be made public.

But the president’s one line on the CIA-Senate debate is deeply troubling: “With respect to the issues that are going back and forth between the Senate committee and the CIA, [Director] John Brennan has referred them to the appropriate authorities and they are looking into it and that’s not something that is an appropriate role for me and the White House to wade into at this point.”

Here’s the problem: Obama’s framing in that sentence very much wades into the debate.

The important context here is the Department of Justice is running two parallel investigations into the CIA’s removal of the so-called “Panetta review”—one into wrongdoing by the Intelligence Committee, and one into CIA wrongdoing.

The CIA claims that Senate staffers illegally obtained a copy of that review, which damns the CIA for it’s role in Bush-era interrogations and is at odds with public statements from the CIA.

But Feinstein strenuously, and at great length, contested that claim in her Senate floor speech on Tuesday. She explained how the Panetta review came into the committee’s possession: either by intentional or unintentional disclosure by the CIA while turning over the 6.2 million documents related to the interrogation program, or by a “whistle-blower” either at the agency or working for the private contracting firm that was vetting the documents. She went on to explain that the Senate Legal Counsel affirmed to her that these were not classified documents, and that the committee was permitted to have them.

Furthermore, Feinstein explicitly alleged that the CIA’s referral of a criminal report might have been an effort to intimidate Senate investigators.

So when Obama says that “John Brennan has referred [the matter] to the appropriate authorities,” it reads as an implicit rebuke of the intimidation charge. That he mentions only the allegation of Senate misconduct by Brennan and not the parallel investigation into CIA wrongdoing is also troubling.

Obama’s remarks came on the heels of a revelation by White House Press Secretary Jay Carney earlier on Wednesday that the White House was aware of the criminal complaint the CIA planned to file against Senate investigators, but did not intervene.

Feinstein’s office did not immediately respond to a request for comment on Obama’s remarks from The Nation.