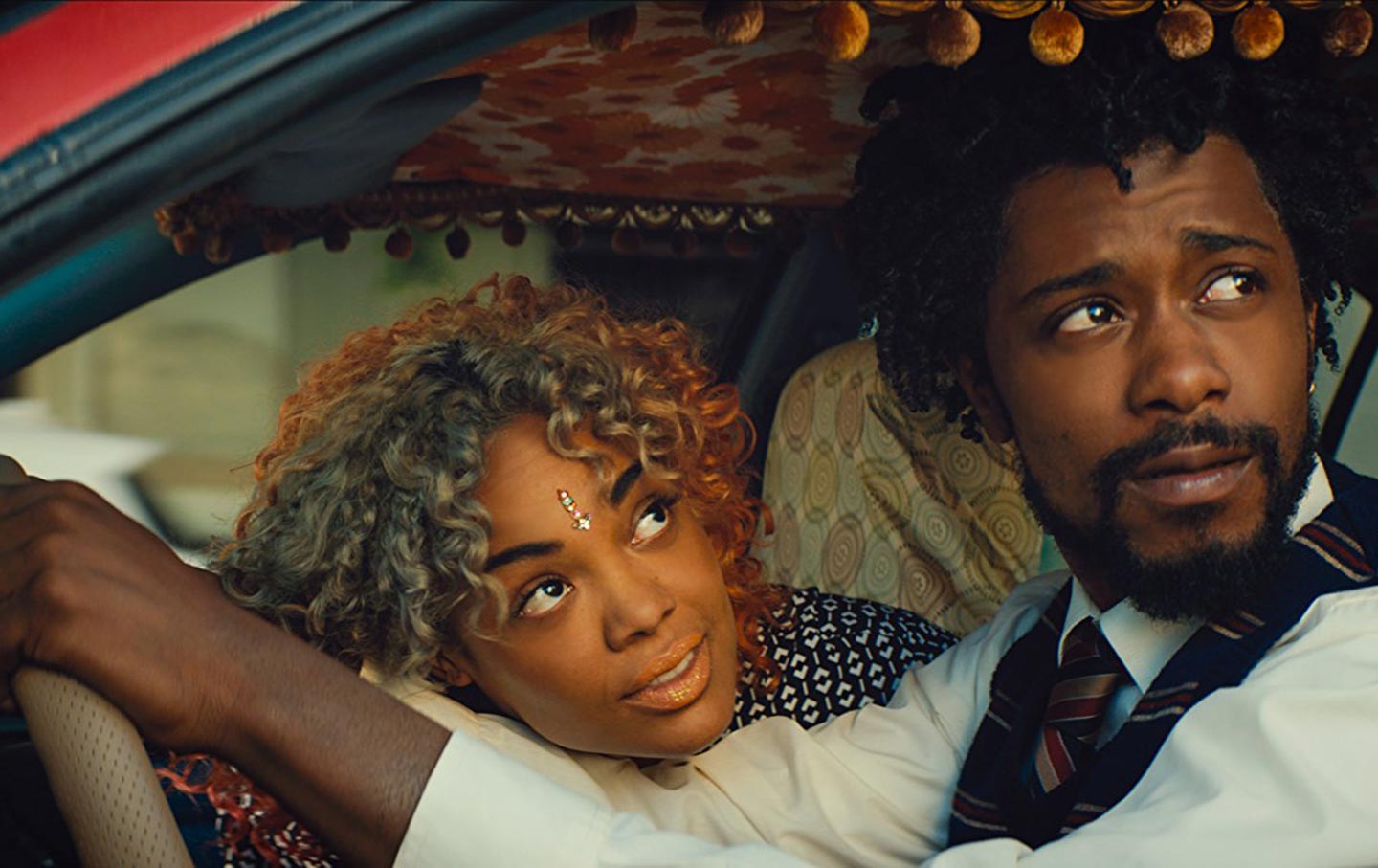 No sooner had the Greatest of All Time firmly established his reign as champion than he abandoned the name Cassius, as the world’s most glorious butterfly might have shucked its cocoon. But in Boots Riley’s Sorry to Bother You (which is, in part, a tale of metamorphosis), the scuffling and frequently scuffed protagonist clings to his given name of Cassius, often shortening it to Cash, which goes well with the surname Green. Amiable, imaginative, and at first seemingly none too energetic, Cash is all about getting that green, as he has to be, living in a garage in Oakland on which he owes four months’ rent. To make money, he will sell whatever he needs to, including himself. For a considerable stretch, he does well at it, too, though with shameful consequences for his soul—which is the only part of this movie I could have predicted.

How many parts are there? It’s hard to say. Sorry to Bother You bears some resemblance to the car that Cash, in his original state, impels through Oakland on pocket change and willpower: a vehicle banged together from so many spare panels that it’s a five-tone. Working with much the same ingenuity and disdain for elegance that would have ruled in that auto-body shop, Riley has made a fable about union organizing and worker solidarity—astonishing to see such a thing nowadays—and then welded it onto a satire about the ways in which people perform race, a diatribe about contemporary media as a culture of humiliation, a critique of art-world critiques of global capitalism, and a horror movie. How all this fits together, I’m not sure; but I’m content to have muttered “Now what?” during the screening far more often than “That again!,” and I’m delighted to have staggered a little on the way out, having had all that subject matter dumped on me in a little under two hours.

The Presence and Absence of Basquiat

To the extent that Sorry to Bother You holds together, the person doing the binding is Riley’s lead actor, Lakeith Stanfield. Best known for playing the kind, hapless, and obliquely brilliant stoner Darius on Atlanta—and for having shouted the title in Get Out—Stanfield begins the film holding his body like a question mark. The shoulders are hunched within an unfortunate sweater vest (just the thing, Cash apparently thinks, to impress the white people doing the hiring at the RegalView Telemarketing boiler room). The head is thrust forward, with eyes sometimes vaguely downcast, and it’s topped by a possibly inadvertent hairstyle, whose protrusions echo the old ornamental fringe that dangles from the ceiling of his car. Everything about Cash at first seems puzzled, tentative, and dubious; everything overwhelms him. When he takes up the telemarketer’s craft, he feels as if each call brings him crashing down from his workstation to a site he can picture on the other end of the phone, where people are going about their lives with no need of him. Each time, as you laugh, you see the mute apology that Stanfield puts into Cash’s eyes.

Then the old hand at the next workstation (Danny Glover) lets Cash in on the secret of successful telemarketing: Use a white voice. No, not merely nasal, but also unconcerned, unpressured, unrushed—the voice of someone who has never been fired but only laid off. It’s not the way white people actually talk, the mentor explains, but the way they think they ought to sound. Cash tries it (the abruptly high-pitched, singsong tones that emerge from Stanfield’s mouth are voiced by David Cross), and it works too well. It’s not just that Cash begins to rack up sales. It’s that you see him straighten up and start to smile, with pride and pleasure brightening his face for the first time. And worse: Now that he’s using his white voice, Cash no longer feels the slightest empathy for the people he’s got on the line.

A man who has freed himself from empathy might be all set to make money, but he will no longer be a reliable help to the friends and fellow workers (Steven Yeun and Jermaine Fowler) who are struggling to unionize RegalView Telemarketing. Nor will he have an easy time holding on to his girlfriend Detroit (Tessa Thompson), given her anticolonialist, anticapitalist, Africanist ideals. Detroit earns her living on the streets as a kind of human billboard, holding aloft the products of a sign-making company, and at night creates performance art—which is another way to turn her own body into a sign. In one of the movie’s more disturbing twists, she uses the performance not to recuperate from the day’s indignities but to intensify them by calling abuse onto herself—whether in masochistic identification with Cash or to repudiate him violently, it’s impossible to say.

We come to the theme of injury. For reasons that are too thickly determined to explain here, Cash spends the movie’s second half with a length of white gauze wrapped around his head, its surface perpetually oozing a blot of red. You might interpret this bandage as an outward sign of the wound he has inflicted on himself within, especially as the plot gets weirder and a Bay Area gazillionaire white-bro disrupter (Armie Hammer) persuades him—in the film’s most scabrously funny scene—to proceed from marketing artificial whiteness to acting out a confected blackness. But then, Cash isn’t alone in yielding to self-humiliation while telling himself that money cures all. In the world of Sorry to Bother You, TV’s most popular game show has people compete by taking a massive beating, which also seems to be the prize.

Is that supposed to be amusing? The people in Sorry to Bother You generally think so. Having grown accustomed to taking blows, they positively bubble over at the sight of somebody else getting it for a change. I might complain that this analysis of our callousness is a little too pat and familiar, except that it isn’t an analysis at all but one more dented panel on this jolting, fuming, ridiculously transporting jalopy of a movie.

“Stick to the script,” the bosses at the telemarketing firm keep telling their workers. Cassius, who is no champion, does just that for the longest time; but in his first feature film, Boots Riley pretty much shreds the script, or several of them. Nothing in this movie happens the way it’s supposed to, from the non-hero’s discovery of his special gift (which turns out to be the opposite of empowering) to the valiant exposure, on live TV, of Armie Hammer’s nefarious plans (which only helps move them along). The one unifying statement you could make about this burlesque is that it’s a lesson in the virtue of disobedience—which, by the end, Cassius has learned. Unwillingly.