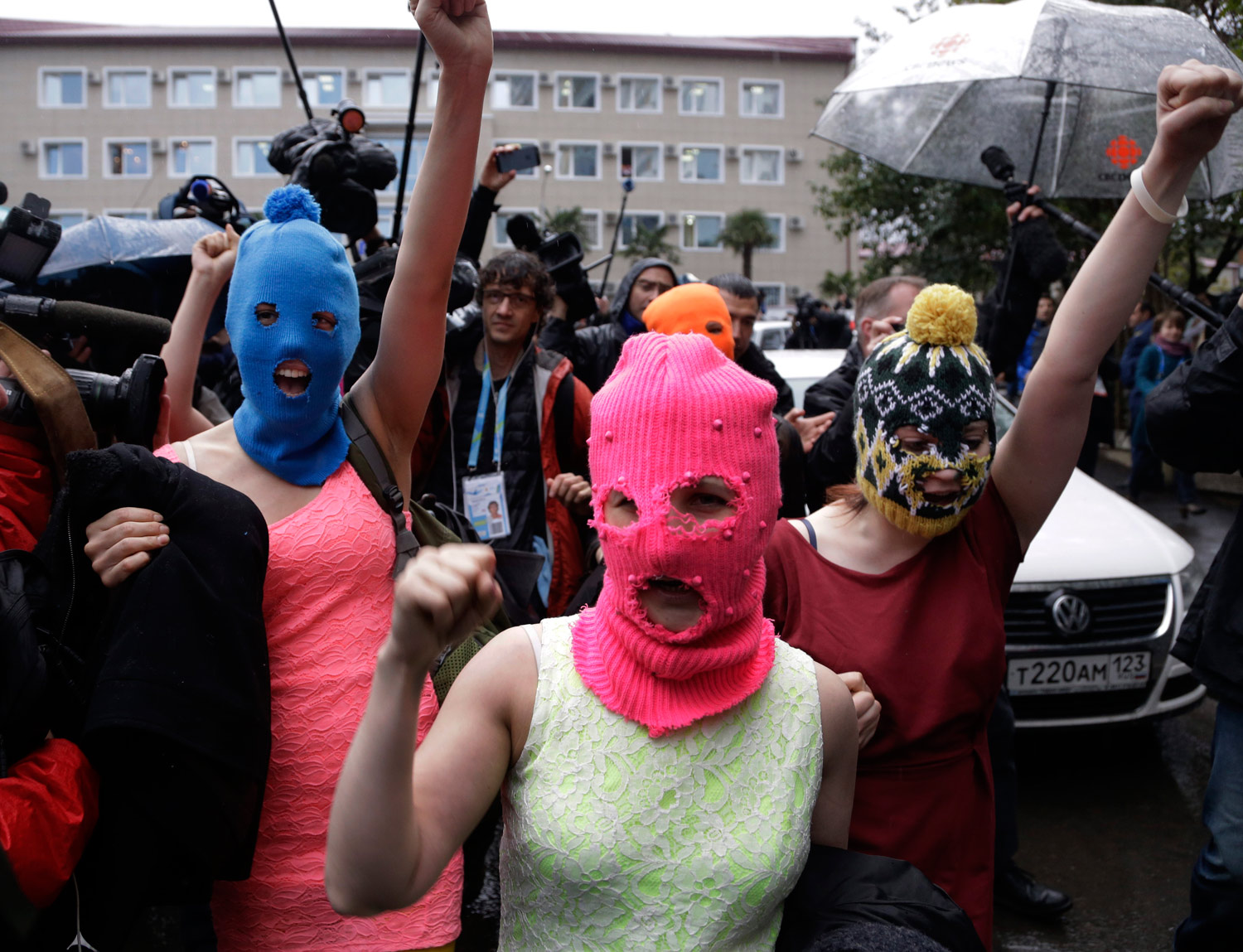 Russian punk group Pussy Riot members Nadezhda Tolokonnikova, in the blue balaclava, and Maria Alekhina, in the pink balaclava, make their way through a crowd after they were released from a police station, Tuesday, February 18, 2014, in Adler, Russia. (AP Photo/Morry Gash)

In Cairo’s Tahrir Square, way back in 2011, there was a moment that starkly showcased the aspiration for a better future alongside the past puking up its own barbarism. That was when the masses of people who had fearlessly gathered to raise demands for a democratic Egypt, were set upon by men on horses and camels, brandishing swords. This was more than an attempt at intimidation. Egypt, as the second-highest recipient of US military aid, had better weapons at its disposal than horses and swords. It was meant to summon the most atavistic fears among protestors and conjure images of age-old horror stories only whispered by elders.

On Tuesday, in the city of Sochi, site of the 2014 Winter Olympics, there was a similar showcase of a barbarism more identified with the nineteenth century than the twenty-first. Members of the punk rock collective Pussy Riot were attacked by Cossacks and horsewhipped in the streets of Sochi. Cossacks are brutal, extra-legal militias whose roots in Russia stretch back to the fifteenth century. During times when whichever Czar occupied the Winter Palace needed to show his disregard for human life, the Cossacks were always reliably on call. When my own Jewish grandparents would speak about the Russian pogroms and the mass slaughter, rape and displacement of their own parents and grandparents, it was the Cossacks who were described with the most nervous swallows. Since the fall of the USSR, the Cossacks have made a comeback, particularly in the south. Their very presence in Sochi speaks to a message from Putin in kinship with Mubarak’s setting the horses loose in Tahrir.

As for Pussy Riot, the group, clad in their trademark pink balaclavas, was attempting to play a song underneath a flashy sign advertising the Sochi Games. The tune was probably going to be a protest track they had pledged to perform in Sochi called “Putin Will Teach You How to Love the Motherland.” They were never able to play a note.

At least ten Cossacks tore off their signature masks and trashed their instruments, with at least one reported to have used pepper spray. One male PR supporter had his face bloodied. Then the Cossacks pulled out the whips. One group member, Nadezhda Tolokonnikova, was whipped while lying on the ground. Tolokonnikova was one of the two Pussy Riot members who had spent eighteen months in prison for playing a “punk prayer” in a Russian Orthodox temple. It reportedly took three minutes for the police to arrive on the scene and no arrests were made.

Readers need to understand that three minutes, in the context of a highly militarized Olympic fortress is an eternity. One can ask Vladamir Luxuria about that. Luxuria, an Italian politician who was the first openly trans member of a European Parliament, was arrested last weekend in Sochi. Her crime was unfurling a banner that read, “Gay is OK”. Like other attempted protesters, she was arrested in an eye blink.

As for Pussy Riot, the attack by the Cossacks took place just hours after they had been released by police after being held on spurious charges of stealing from their hotel room. One member said, “We were stopped in our hotel, told that somebody had stolen some money, but they detained us for being activists.”

In prison, they accused the Russian police of beating them after they refused to speak without their lawyer present. Upon her release Tolokonnikova tweeted, “Putin will teach you to love the motherland. That’s what makes the Olympics.”

There is no other way to read this other than it being a sign of the desperation of Russian security forces to keep a lid on discontent, not to mention an effort to send a signal to athletes to know their role and shut their mouths. The IOC has helped in this endeavor, threatening the Ukrainian Olympic Committee this week with sanction for asking if they could wear black armbands in commemoration of the loss of life in Kiev. Clashes between the army, riot police and protesters have left at least twenty-five people dead and 241 injured in the Ukrainian capital.

The IOC nixed their request saying that it was ”impossible according to the Olympic Charter.” These kinds of responses from the IOC and the Russian state are why Yelena Goltsman, founder of a New York City group for Russian-speaking Americans called RUSA LGBT, said, “I am not surprised [there have been few protests in Sochi]. This is not Russia. This is a city that is made up. It was leveled, then created into theme park.”

It’s a theme park, all right. It’s Putin-Land, where a trip to feudal Russia, complete with horse whippings from Cossacks, only costs the price of a song.