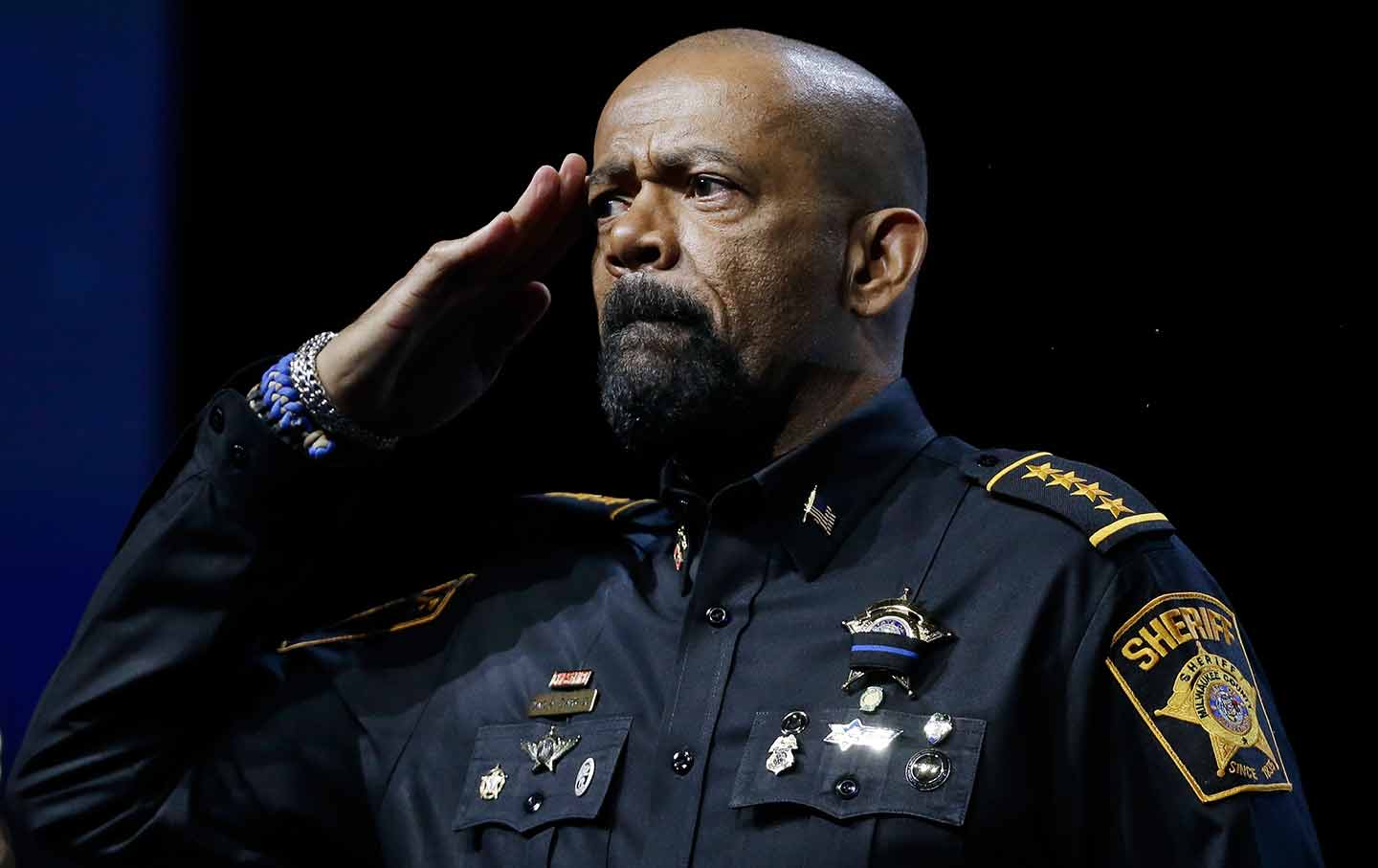 Donald Trump is shredding the Constitution. But he can’t do it on his own. He needs a lot of help to advance an agenda that aggressively assaults the rule of law, the separation of powers, freedom of the press, and the basic liberties of Americans.

Trump’s got Attorney General Jeff Sessions on the job of attacking voting-rights and civil-rights protections. He’s got House Speaker Paul Ryan and Senate majority leader Mitch McConnell shutting down the system of checks and balances. But the work of undermining basic liberties is a big task, even for an authoritarian president, so Trump is reportedly calling in reinforcements.

Meet Milwaukee County Sheriff David Clarke Jr., an ardent ally of President Trump and Wisconsin Governor Scott Walker, who announced on Wednesday that he would leave his elected post to become an assistant secretary in the Trump administration’s Department of Homeland Security. Though DHS officials have so far declined to confirm the move, Clarke says, “I’m looking forward to joining that team” as a top official in the department’s Office of Partnership and Engagement that coordinates DHS outreach efforts to state, local, tribal, and territorial governments and to local law-enforcement agencies.

If Clarke gets the job, he’ll arrive as an over-the-top Trump apologist who makes the president’s bluster about “enemy of the state” journalism and religious targeting of refugees seem mild by comparison.

“Clarke’s unconscionable record makes him unfit to serve. This appointment is a disgrace.”—Senator Kamala Harris

Clarke refers to progressives who advocate for equality and equal protection under the law as “rat bastards on the left.” And he leaves little doubt about what he would do with power.

The sheriff proposes “a suspension of habeas corpus” so that “suspected” Americans can be jailed indefinitely as part of his war-at-home program for “bold and aggressive action.”

As the Milwaukee Journal-Sentinel noted late last year, when Clarke was under consideration for DHS secretary, “Milwaukee County Sheriff David A. Clarke Jr. wants to bring the war on terror to the home front. Clarke, who is in the running for a top job in President-elect Donald Trump’s administration, says in his upcoming memoir that the US needs a major overhaul of its homeland security program. Authorities, he writes, should treat American citizens suspected of being terrorists as ‘enemy combatants’ who can be questioned without an attorney, arrested by authorities and held indefinitely.”

Clarke’s new book, Cop Under Fire: Moving Beyond Hashtags of Race, Crime and Politics for a Better America, is packed with “we are at war” language and talk of operating “under a war time model.” He advocates for rounding up Americans who are perceived as threats, suspending their rights, holding them indefinitely, and handling cases with military tribunals rather than the courts.

This is nothing new. On Clarke’s radio show, The People’s Sheriff, he advocated for suspending the writ of habeas corpus (America’s historic protection against unlawful imprisonment) and for shipping suspects off to Guantánamo Bay.

“Clarke’s apparent disregard for the US Constitution is extremely troubling.”—Law Professor Edward Fallone

“I suggest that our commander in chief ought to utilize Article I, Section 9 and take all of these individuals that are suspected, these ones on the Internet spewing jihadi rhetoric,” Clarke announced in 2015, on a radio broadcast tracked down by the group American Bridge and reported by Mother Jones and other publications. The sheriff proposes to “to scoop them up, charge them with treason and, under habeas corpus, detain them indefinitely at Gitmo.”

What kind of numbers is Clarke talking about?

“We have no idea how many people out there have pledged allegiance or are supporting ISIS, giving aid and comfort, but I would suggest hundreds of thousands, I would suggest maybe a million,” Clarke said. “It’s just a guess. And then you take the known terrorists that are here, and you think we’re going to arrest all these people and put them in jails and then sentence them to prison? It’s idiotic. [Send them to] Gitmo and hold them indefinitely under a suspension of habeas corpus.”

How broad a brush does Clarke paint with when he is discussing threats to America?

Around the same time that he was calling for the suspension of habeas corpus protections, Clarke tweeted: “Before long, Black Lies Matter will join forces with ISIS to being down our legal constituted republic. You heard it first here.”

During the 2016 presidential race, in which the sheriff, who was elected as a Democrat, campaigned across the country for Trump, Clarke wrote an opinion piece that was headlined: “This is a war, and Black Lives Matter is the enemy.” In it, he argued, “We have several forces internal and external attacking our rule of law: ISIS, Black Lives Matter, Occupy Wall Street—just the most recent iterations of the elements who brand themselves as unique but seek the same revolutionary aim: take down the West, the philosophy of equality before the law, and replace it with their authority, their rules, their hate.”

The arguments against making Clarke part of this administration are many. As Milwaukee County Executive Chris Abele, who has had to try and work with Clarke as sheriff, says, “For the country I love, the last thing America needs is another loud voice angrily and unproductively telling you who to blame and who not to trust.” Shripal Shah, the vice president of American Bridge, a progressive research group that has monitored Clarke’s record, says, “Sheriff David Clarke is a bigot who has allowed numerous people—including an infant—to die or be brutally tortured in his jails and on his watch. Clarke’s actions and beliefs are directly at odds with American values and have no place in our government at any level. It’s shameful that Clarke still holds a job in law enforcement, and appalling that Trump wants to give him a promotion.”

“Sheriff Clarke’s apparent disregard for the US Constitution is extremely troubling,” adds Edward Fallone, a constitutional scholar who teaches at Milwaukee’s Marquette University Law School. The sheriff’s most extreme proposals appear to be “manifestly unconstitutional,” warned Fallone in a November 2016, conversation with the Milwaukee Journal-Sentinel that noted, “Clarke does discuss the Bill of Rights and Constitution in detail in other sections of his memoir, including a chapter on gun rights and another on a proposed Convention of the States—though he dates the writing of the Constitution, incorrectly, to 1776 instead of 1787.”

California Senator Kamala Harris, a former prosecutor with broad experience in law enforcement and matters constitutional, is right: “Sheriff David Clarke’s unconscionable record makes him unfit to serve. This appointment is a disgrace.”

Christine Neumann-Ortiz, the executive director of the Milwaukee-based Voces de la Frontera immigrant rights group, which has frequently clashed with the sheriff, takes the calculus a step further. “Clarke is unfit for any office and should face criminal charges for the deaths and abuses at the jail,” says Neumann-Ortiz. “Trump’s appointment of Clarke shows this administration’s disregard for human rights.”