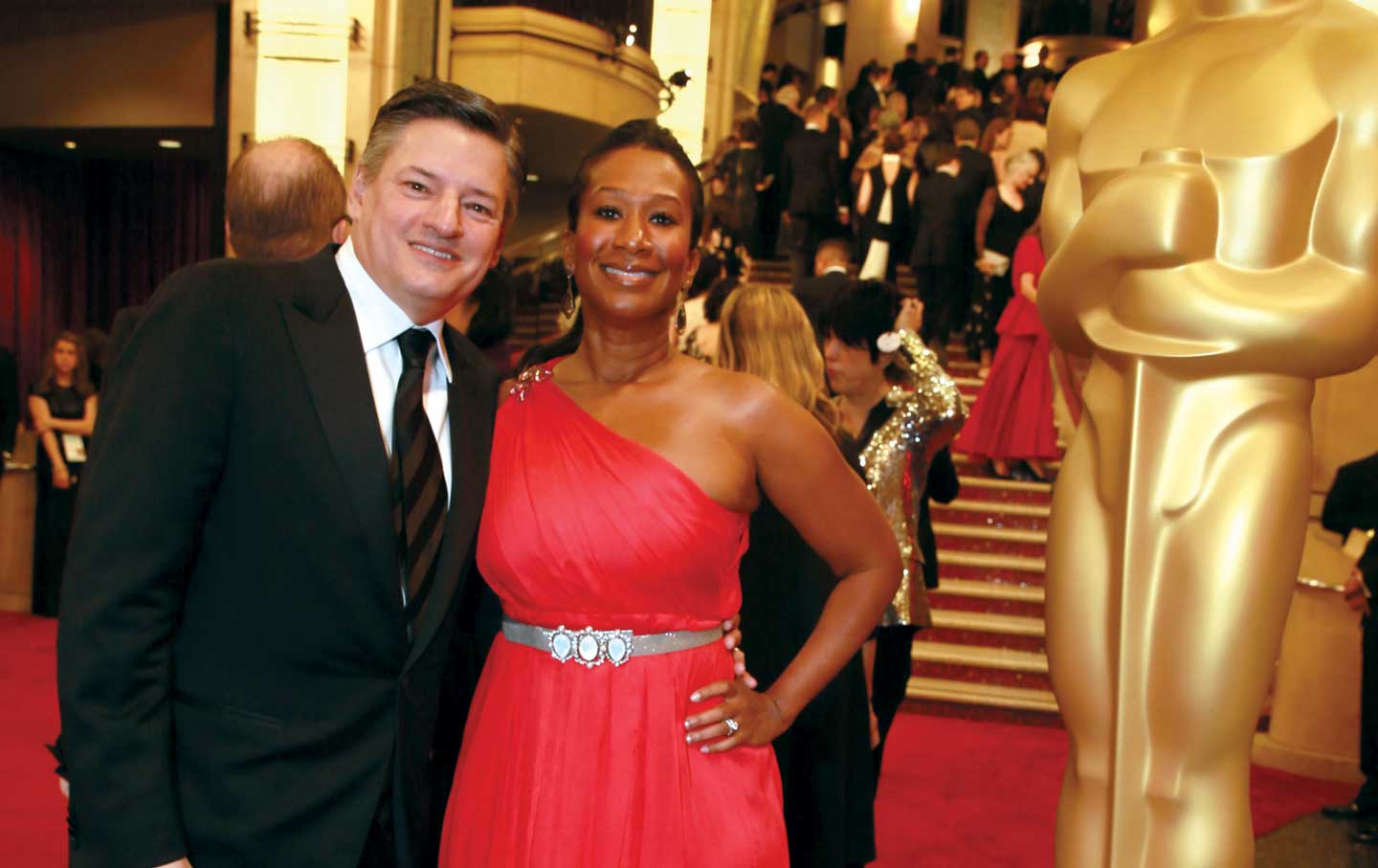 Ted Sarandos of Netflix and Nicole Avant at the 87th Academy Awards.

That thing you’re watching, or playing, or reading: Who but curmudgeons doesn’t now call it content? The concept of medium specificity—that a film is something fundamentally different from a television show or video game—had a good run, but it now seems increasingly beside the point. For those who can afford the requisite subscriptions, all digital amusements and diversions can be conveniently engaged on the same handheld device. This is an impressive and often welcome development, though it generates its own confusions. November’s powerful, high-profile four-part miniseries Olive Kitteridge, which I watched in bed on an iPad using a borrowed HBO Go account the day after its premiere, introduces itself on-screen as “A Film by Lisa Cholodenko,” and the claim seems plausible enough, if unnecessary. “Film” is no longer a convincing marker of prestige, just as HBO can no longer meaningfully distinguish its programming as “not TV.” These days, “film” can mean any piece of audiovisual media lasting more than an hour.

“Content” is an ugly noun, one that effectively reduces art to merchandise, but Distribution Revolution: Conversations About the Digital Future of Film and Television (California; Paper $29.95) is adamant about the term’s utility. Edited by three academics at the Media Industries Project at the University of California, Santa Barbara, this highly readable and open-minded volume provides an inside view of industry responses to a potentially traumatic set of disruptions, through conversations divided into three sections: one on studio executives, another on innovative industry upstarts, and a third on creative talent. Their shared problem is that digital delivery systems have devalued the worth of their content, and nobody knows how to keep consumers paying for things we can increasingly get for free.

Dispensing with nostalgia, Distribution Revolution dedicates itself to those already resigned to the digital transition. The executives interviewed here mostly project a loose-limbed candor about their business models, even if they can’t be expected to share proprietary plans. The book reflects an industrywide awareness that in today’s market, all solutions are temporary, and no successful revenue model is immune from disruption.

Eager to avoid the mistakes of the post-Napster music industry, the bigwigs share an anxiety about digital piracy, but most are convinced that consumers skirt legal channels only as a last resort and as a response to scarcity. The development of platforms to make their products widely available at reasonable prices is expected to keep the money flowing into their pockets.

The traditional “release windowing” strategy—in which a film moves from theaters to home video to network TV and so on, the price declining with time—has served to regulate the value of content, but increasingly I sense that people are willing to wait until the product becomes cheaper. A $14.99 movie purchased on iTunes might be a $3.99 rental just a few weeks later. And doesn’t it seem like every well-reviewed documentary streams on Netflix within a year? So why pay full ticket price? Making money in this market often means preying on the suckers who don’t know any better, like those who purchase a CD at Starbucks or Walmart because they haven’t heard of Spotify.

Given its access to movers and shakers, Distribution Revolution offers more news than the average account of industry trends, though it may already be dated. The interview with Netflix content chief Ted Sarandos took place months before the House of Cards premiere immediately made the company a major player in original programming, inspiring similarly successful enterprises at Amazon and Hulu.

In defense of creative disruption, Sarandos claims to be “restoring a sense of connection between consumers and content,” fortifying an “emotional investment” that has somehow been severed. Color me skeptical. If anything, Netflix’s frictionless all-you-can-eat access model has devalued the image, turning the act of viewing into an endless game of whack-a-mole. I can think of few digital innovations more annoying than the pop-up bombarding you with related programming the very instant a movie cuts to black. In the near future, Netflix’s presumably awe-inspiring proprietary recommendation system may take the micro-targeting of audiences to its logical conclusion by calibrating content to our exact tastes and habits. It’s one thing to turn movies into content. But this sounds like the Entertainment from Infinite Jest.

Unswayed by Silicon Valley–style technological determinism, the editors of Distribution Revolution are keen to frame the ongoing revolution as the byproduct of a long history of corporate maneuvers and policy changes. For executives and creators alike, one recurring touchstone is the Clinton-era repeal of the financial interest and syndication (“fin-syn”) rules, which led to corporate consolidation and the housing of production and distribution under the same roof, rendering many independent producers obsolete. Today, a show that airs on ABC is very likely to have been produced at ABC.

Digital cameras are relatively cheap, and YouTube is still free; with the barriers to entry so effectively low, it’s tempting to entertain notions of a grand media meritocracy. But conglomerates have attained a seemingly unprecedented market power. Comcast, the country’s largest Internet service and pay-TV provider, also owns NBC Universal and all its content. And thanks to the decline of the once-dependable home-video market, marketing and distribution departments now play an outsize role in determining what gets made. For the rest of us, there’s family, friends, and Kickstarter.