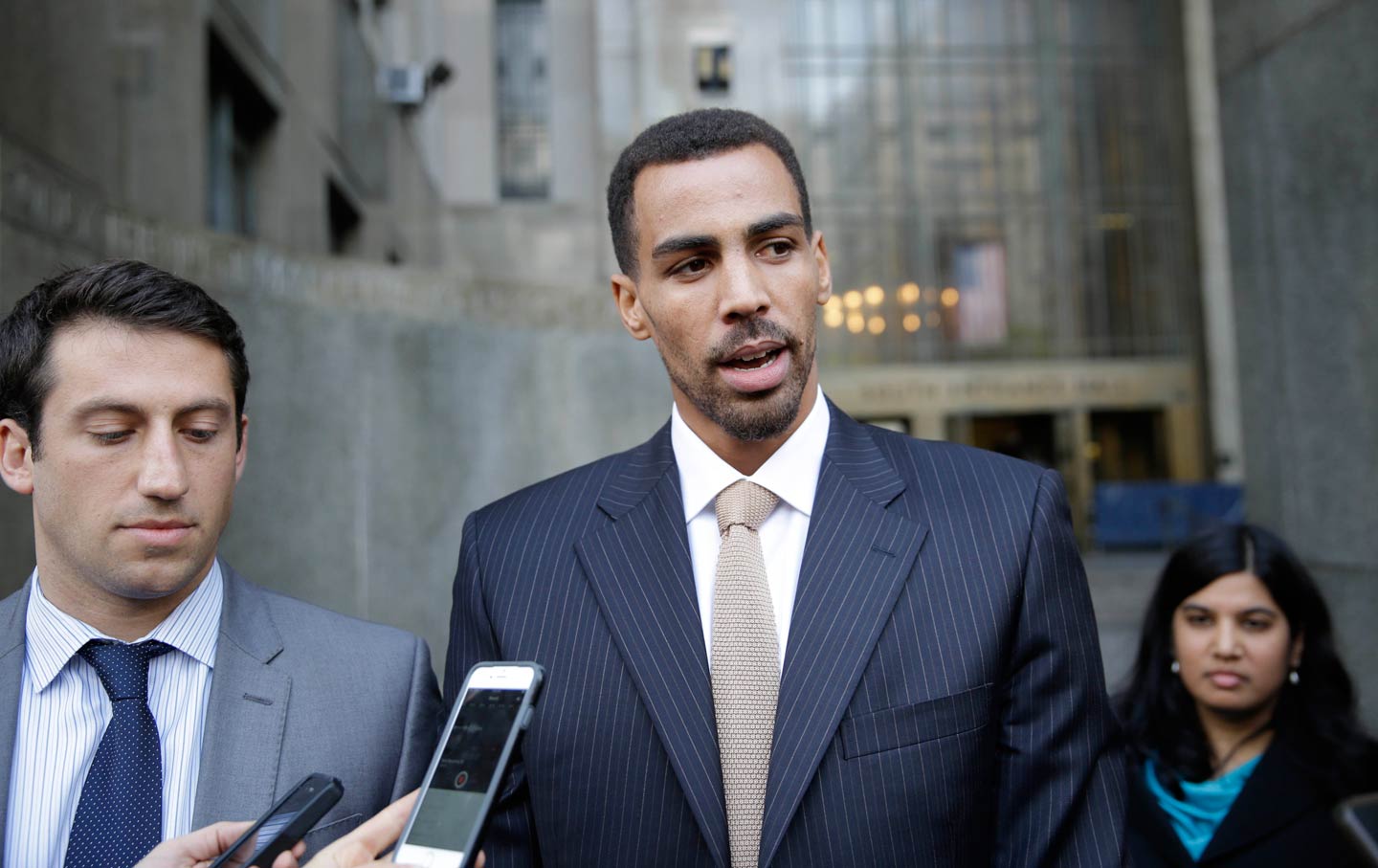 After just under an hour of deliberation, a Manhattan jury acquitted Atlanta Hawks guard Thabo Sefolosha of misdemeanor charges ranging from obstructing government administration and disorderly conduct to resisting arrest last week. The charges stemmed from a late-night confrontation with the New York Police Department last April that left Thabo with a broken leg.

The injury kept the Hawks’ “LeBron-Stopper” out of the playoffs, which, sure enough, eventually found the overmatched Hawks smacked down by King James and his Cleveland Cavaliers.

One would imagine this case would be catnip for the sports media, given the number of NBA players that stood with the Black Lives Matter movement against police violence and the fact that their concerns had come home to roost. Yet there was mostly silence. It is a shame, because the entire episode leaves us with a great deal to ponder. Here are seven of my own takeaways:

1) It is significant Sefolosha even went to trial. Several NBA players have been arrested in similar circumstances over the last decade: instances where police arrested them without cause or used pepper spray or tasers to put them down. Usually these cases are settled quietly in the name of mutually beneficial public relations. But Thabo Sefolosha risked his freedom and livelihood in an effort to clear his name. This speaks to his own character as well as the moment in time in which we are living. There is simply less tolerance for unchecked police aggression.

2) Thabo Sefolosha received justice, but the system remains unjust. Sefolosha was able to fight back because he could afford competent attorneys to find witnesses and mount a defense. Most people hurt by the police and then charged with crimes for their troubles lack the resources needed to beat the system. In addition, these officers were found to have broken a man’s leg without cause, but no one expects them to be prosecuted, lose their jobs, or even be placed on leave. They essentially exist in a lawless, unchecked space.

3) There is a frightening mentality in the New York district attorney’s office. Assistant DA Francesca Bartolomey closed her case with two arguments. The first was, “The defendant doesn’t get to say where the crime scene ends.” In other words, even though Thabo was far down the street from where a stabbing took place, the police had the right to physically accost him for not moving quickly enough. The second was when Bartolomey said, “Imagine a world where we are allowed to say no to an officer. It would be chaos.” Dear Lord. Imagine a world where you are not allowed to say no to a police officer.

4) The NYPD has a racism problem that was just proven in open court. One of the least covered aspects in this trial was that Thabo’s lawyer had surveillance footage of the initial approach by police. They are seen passing Thabo’s white teammate Pero Antic and making a beeline for Thabo. He was in their sights. He was their target. His skin was a bull’s-eye.

5) It’s easy to understand why the Atlanta Hawks left it all on the court for their coach Mike Budenholzer. Coach Bud took a team without superstars to the Eastern Conference Finals and was named Coach of the Year. He also traveled to Manhattan to testify on Thabo’s behalf, vouching for his truthfulness, character, and version of events. In the aftermath, he said, “Thabo is such a great person, we feel great about supporting him. We’re very happy for him and his family that the decision went in his favor today. Now he can focus on basketball and get back to doing what he enjoys and loves.” Don’t think for a moment that any NBA coach would have stepped into a criminal courtroom to do this.

6) The sports media dropped the ball. I wrote about it before, but the absence of coverage on this case speaks to the power of the New York Police Department, particularly its public relations wing. Talking heads, as I was told, were instructed not to cross them. Or maybe in some cases, Thabo was deemed too irrelevant a player to pay attention to. But it was a colossal failure not to understand just how deep in the vein of NBA players’ life experiences this case cut. But hey, when there is breaking news about who to select on DraftKings, maybe there just isn’t time to talk about the NYPD breaking an NBA player’s leg right before the playoffs.

7) The only question that now remains is whether Thabo Sefolosha will bring a civil suit against the NYPD. When asked, Sefolosha said, “I haven’t made a decision on that.” It would be more than understandable if he wants to put this behind him and focus on rejoining the Hawks. But it would be a public service if Thabo uses this victory as a platform to take a bite out of the NYPD and sue them for every last cent he lost, and every moment of mental and physical anguish he endured last spring. Thabo could then take that money and start a legal fund for families who are subject to police brutality, yet don’t have the means to hire competent attorneys. That act of solidarity would be epic and truly inch us forward to more families finding a measure of justice in a manifestly unjust environment.