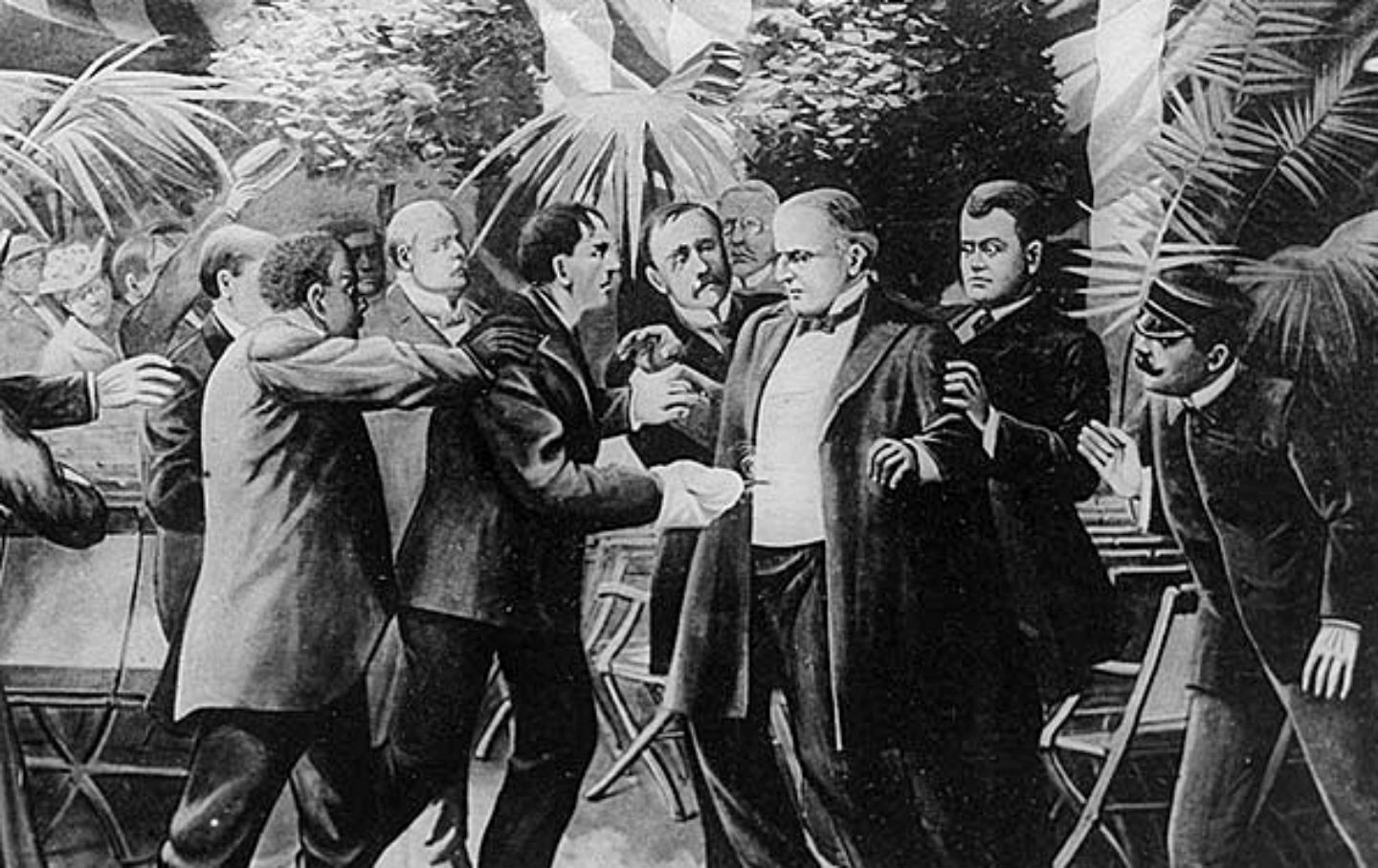 A drawing by T. Dart Walker depicting McKinley's assassination by Leon Csolgosz at the Pan-American Exposition in 1901. (Library of Congress)

On this day in 1901, President William McKinley was shot and mortally wounded as he toured the Pan-American Exhibition in Buffalo, New York. His young vice president, Theodore Roosevelt, famously no fan of The Nation, was hiking in the Adirondacks when he received word, a few days later, that McKinley was not going to survive. In the intervening days, however, it appeared that the assassin missed his mark and that McKinley would live to complete his second presidential term. The Nation, no fan of McKinley and even less a fan of Roosevelt, meditated over the meaning of the assassination attempt and wondered why people keep trying to kill political leaders when they know that other leaders will simply step in to replace them.

The attempt on President McKinley’s life at Buffalo on Friday last touched, as it could not fail to do, the national feeling, instantly and deeply. Nor could any moral and humane person hesitate to denounce without reservation the infamy of a crime not to be excused were the victim the meanest, instead of the most exalted, citizen. The usual confusion of thought has arisen among partisans who grudged a simple expression of sorrow as incompatible with aversion to the President’s policy. And, finally, rejoicing in the failure of the assassin’s aim has been heightened, among sober friends as well as opponents of the administration, by the dread of the government’s passing under a new and untried control in the person of the actual Vice-President. The season of year, the exact interval of two decades, the foreign extraction of the criminal, have conspired forcibly to revive the memory of Garfield’s fate. But it could not be said in Garfield’s time as now that we sip lynchings and negro burnings unmoved with our coffee at breakfast; and this fact alone speaks volumes regarding the prevailing callousness as to the taking of human life.…

A moral of some sort might have lain open to panegyrists and to a gravely reflecting public had the homicidal fanatic at Buffalo been a Filipino, a Cuban, a Steel-Trust striker, or a gloater over the daily cartoons of the yellow journals implicating the President with the Money Power. For this no room was left by the anarchist who simply proved that the most powerful ruler on earth, though styled a republican and chosen by universal suffrage, was no more exempt than any crowned head from the peril of sudden, malevolent extinction. The ruler, not the individual, was shot at and vigilance alone, not reason, can avail against minds which learn nothing by seeing the succession of rulers keep even pace with the file of assassins.