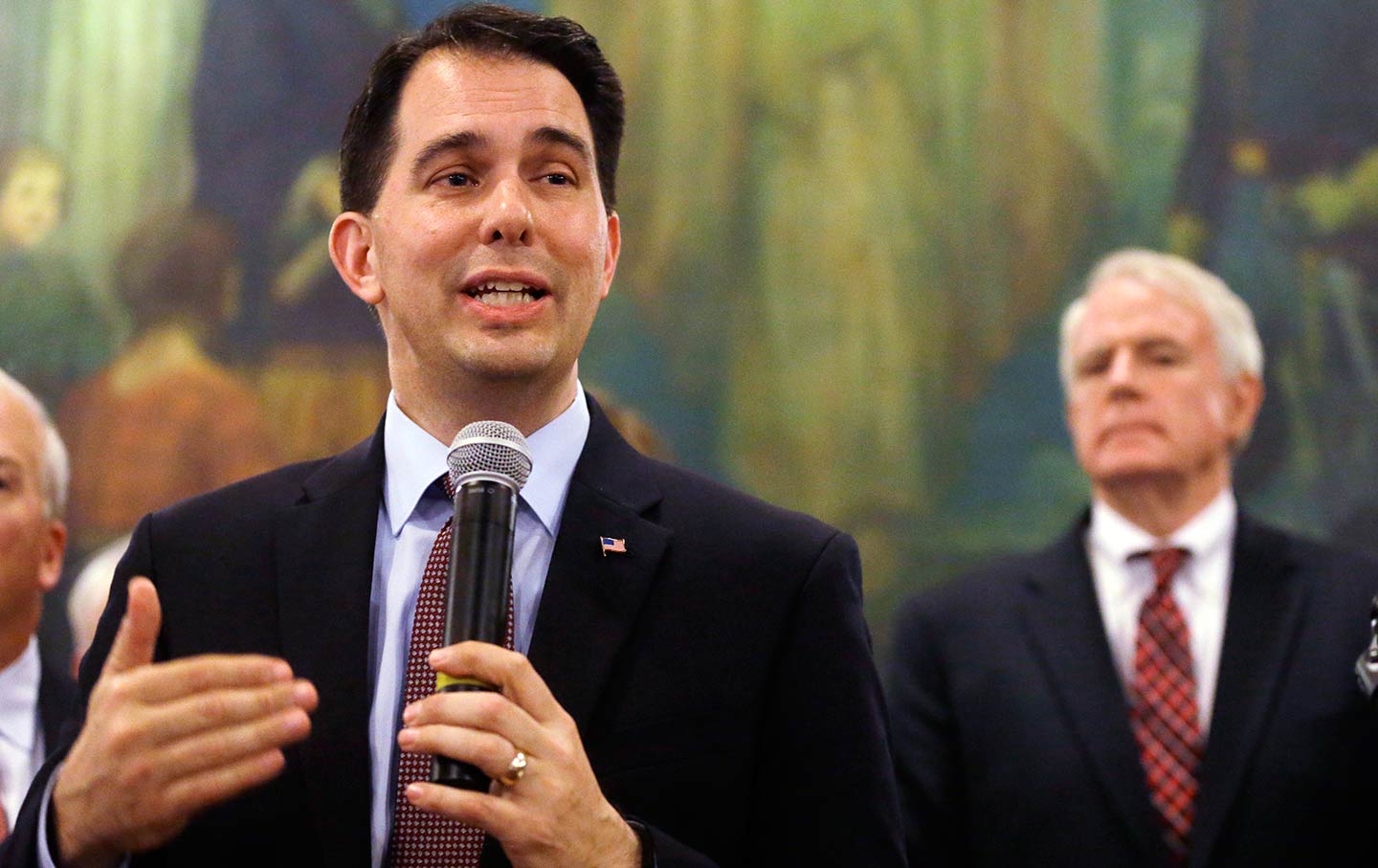 There is much that is repugnant about Wisconsin governor, dark-money lickspittle, and presidential loser Scott Walker, not the least of which is that he has a bully’s instinct to suck up to the powerful and beat down the vulnerable. It’s why he never fails to drop to his knees at the altar of the Koch brothers, and it’s why he swoons at the mention of Donald Trump’s name. He treats his own dignity like he treats a grandmother on Medicare: as something eminently disposable.

But Walker’s most annoying trait is his love of Wisconsin’s sports teams. He’s famously a Green Bay Packers diehard even though the team’s structure of fan ownership—and their star quarterback’s condemnation of Islamophobia—goes against Walker’s core Ayn Randian belief system.  He roots for the University of Wisconsin sports teams even though he has made it his mission to cut hundreds of millions of dollars from the state’s globally respected public university system.1

But Scott Walker’s thirst to suck up to power and his love of Wisconsin sports came together in cringeworthy fashion this week. The Milwaukee Bucks are currently in the NBA playoffs. The very young, tall, and athletic core of players could be primed for a first-round upset of the Toronto Raptors (currently the series is tied 1–1, even though the Raptors were heavy favorites). This was Scott Walker’s response to the growing excitement in the state:

Since the @Bucks are in the #NBAPlayoffs tonight, we made a special hat to give to the @POTUS. #MAGA pic.twitter.com/qMNvFXsb4G

First and foremost, there is their star Giannis Antetokounmpo. Born in Greece, he is the son of undocumented immigrants and has been subjected to death threats by the fascist right wing back in Greece. There is Jabari Parker, who has said on Instagram, “I support BLACK LIVES MATTER. I don’t care what anybody tells me what I should and should not say. At the end of the day, I speak from my heart and I could care less trying to impress someone. BLM does not mean black lives are superior, just means we ‘matter’ too.”3

I will also add that this is the team of Matthew Dellavedova from Australia, a country that for unfathomable reasons Trump has decided to start a feud. If this team really looked like Donald Trump and Scott Walker’s ideal version of America, it would basically be backup center Spencer Hawes playing the Raptors in a game of one-on-five.4

Scott Walker needs to discard his newly minted Bucks-themed Trump hats. I’d say the same to Donald Trump, but you can guarantee that any gift from Scott Walker to Trump will be ignored and discarded. If there is someone who holds Scott Walker in more contempt that the people of Milwaukee, it is Trump. Milwaukee dislikes Walker for his politics. Trump just instinctually holds the suck-ups in contempt, knowing that the more hostile he is toward them, the more they will come back for seconds.5

CORRECTION: A previous version of this article referenced two players from South Sudan and claimed the country was impacted by Trump’s travel ban. The travel ban included Sudan, not South Sudan. The article has been updated.