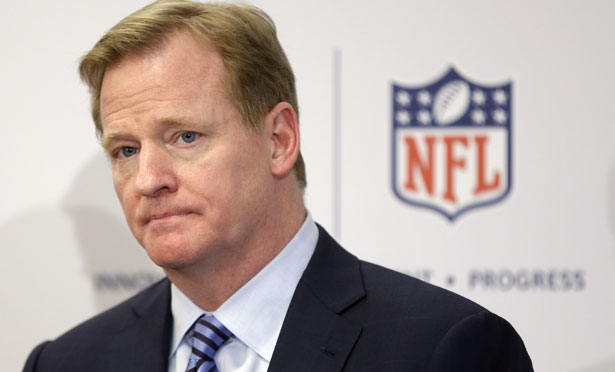 The abuser and the savior: in instances of intimate-partner violence, these roles are often two sides of the same coin—both destructive to a survivor attempting to assert control and escape the cycle of violence. In the case of Ray Rice vs. Roger Goodell and the ruling by Judge Barbara Jones, which has voided the NFL commissioner’s ban of Rice for the entire 2014 season, you see the two sides of the coin on full display. And with this ruling, it has to be said: in the story of Ray Rice and Janay Rice, we have seen Roger Goodell play the role of both “abuser” and “savior” to ruinous effect, without any consideration for the self-determination of Janay Rice.

The role of Roger Goodell as abuser can now be seen with utter clarity. For those who have not been following the case, here is the narrative Goodell put forward that was just summarily shredded by Judge Jones. The commissioner says that he heard about Ray Rice punching Janay Rice and knocking her unconscious and called Ray Rice and Janay Rice into his office to hear what happened from both of them. (This month-old revelation—that Goodell had a survivor tell her story to her abusive partner’s boss in front of her abuser—alone should have triggered his immediate dismissal.) The NFL commissioner then determined that “both were at fault” and suspended Rice for two games. Outrage ensued, so Goodell, in full damage-control mode, hurriedly announced a new sweeping set of guidelines. These new rules—not applicable to Rice, who had already been punished—would include a six-game suspension for domestic violence for a first offense and then a lifetime ban for a second infraction.

Then the videotape of Ray Rice punching Janay Rice dropped, and the NFL’s world stopped turning. The Baltimore Ravens released Rice, and NFL media sycophants became born-again firebrands. As for Roger Goodell, he not only announced more sweeping changes but said that the videotape revealed that Ray Rice had lied to him about what had taken place in that elevator, and in light of this “new information,” Ray Rice was now suspended for the entire season. To believe this, one would have to believe that Roger Goodell, despite a paper trail to the contrary, had never before seen the videotape. You would have to believe that the bottom-feeders at TMZ have greater resources than the team of former FBI and Secret Service agents who work for NFL security. You would have to believe Roger Goodell over a slew of witnesses who say that Rice described in exacting fashion what had happened on that video. Judge Jones chose not to believe the commissioner. She has said instead that Goodell’s story is simply not credible, and the inference is that he suspended Ray Rice indefinitely out of public relations anxiety or, if one is being profoundly generous, out of a guilty conscience.

Now Ray Rice is looking for a team to sign him and Roger Goodell is exposed as a liar. He has also exposed himself to the world as someone who has flipped from being a domestic violence enabler to a self-proclaimed savior. By having an NFL that now says it will end the careers of those suspected of domestic abuse, Goodell has chosen to wear the incredibly ruinous “savior” hat—a hat that flows from the same logic of toxic masculinity that led to years of cover-ups of abuse. That means he has created a new revictimizing system that takes the power away from survivors about how to seize control of their own lives and map out a plan to be safe and end cycles of abuse. Instead, the power rests with Goodell to end the careers, the economic opportunities and the public lives of those suspected of abuse. This will not only disincentivize some survivors from coming forward; it could also create dangerous situations for those figuring out safety plans and strategies to leave abusive partners. The survivor needs to figure out—with assistance if desired—how to best remain safe: either by staying in or ending these relationships. That is not the job of Roger Goodell or the NFL. And frankly, given the track record of a man who continued a practice of covering up instances of domestic violence until the videotape was released, why would anyone trust Roger Goodell to save anyone or anything other than his own career?

Ray Rice released a statement through the NFLPA where he said, “I made an inexcusable mistake and accept full responsibility for my actions.” We should all be waiting for Roger Goodell to take full responsibility for his own actions, as both cover-up artist and wanna-be savior. The NFL is a place where toxic masculinity not only festers but is valorized every single Sunday. The commissioner’s office should ideally be a place where that toxicity is countered, not where it originates.

(This could not have been written without the assistance of former intimate-partner violence counselor and survivor’s advocate Anais Surkin.)