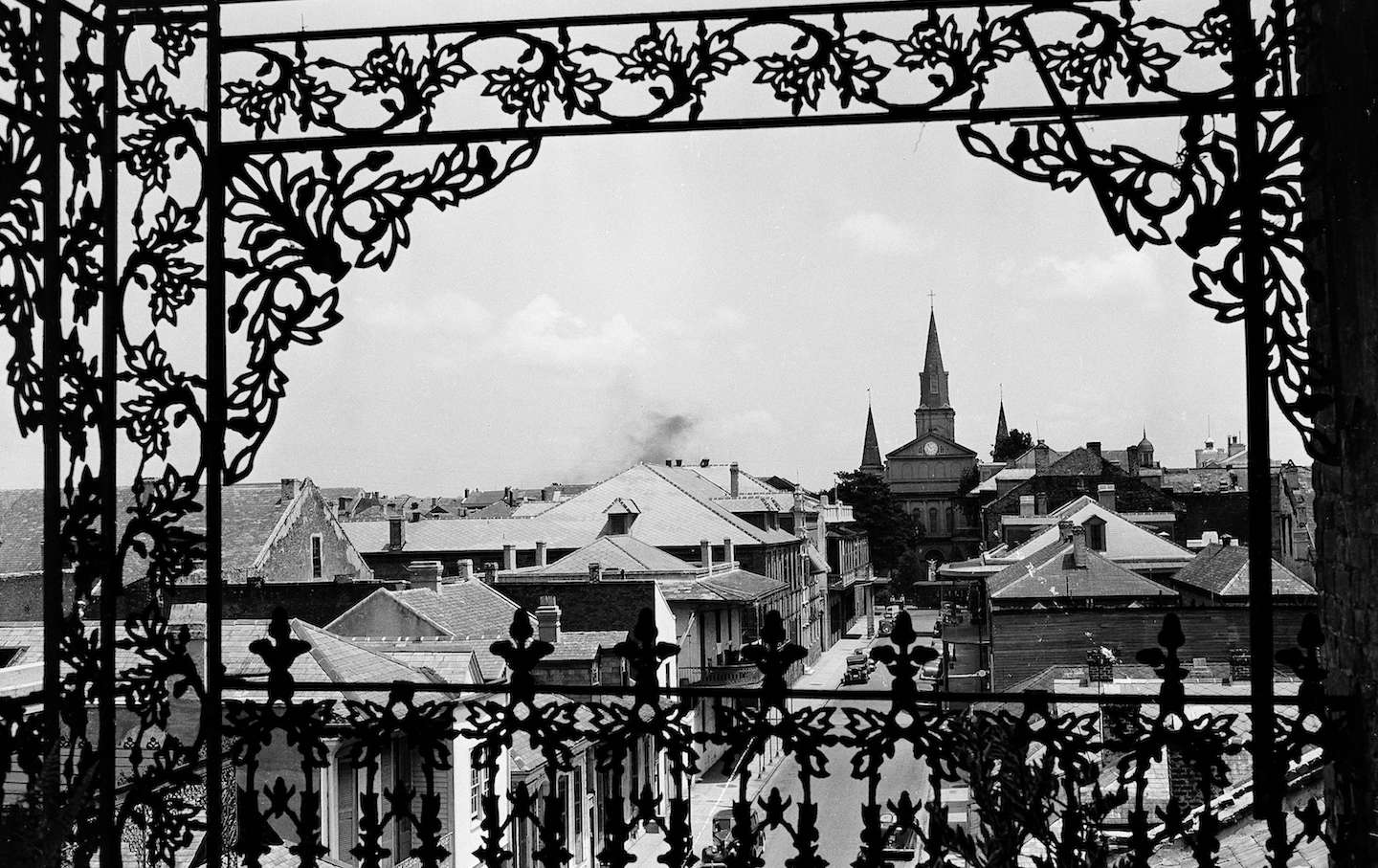 “In the story told to me and in the same story I tell myself,” Sarah M. Broom writes in her debut memoir, The Yellow House, “my father dying and my being born are the same line. I am born; my father dies.” The line between his death and her birth alludes to something as simple as the circle of life, certainly. The line, though, also seems to speak to the way the passing of time can usher in private myths. When we tell the stories of who we are and, more importantly, how we came to be, it is easy to trace ourselves along a line unmoored by interruptions or glitches. This can become our way of self-preserving, of keeping personal histories contained. To plot, instead, quiet truths that lurk beneath the surface of our myths is a process that requires a particular sense of cartography—one that implicates the people who have made us just as it does the places that deeply inform our sense of self. Broom’s The Yellow House reckons with this task as it tells a sprawling story of a house, a city, and a family.

The Yellow House: A Memoir

The Yellow House opens with a map: 4121 Wilson Avenue comes into view as Broom situates her family’s home within the neighborhood that would eventually come to be known as New Orleans East. As Broom tells it, New Orleans East, just seven miles from the French Quarter, is rarely, if at all, included on city maps of New Orleans. For the sake of the story that is to come, Broom guides her readers to the neighborhood by moving us along Interstate 10 to the bridge known as the High Rise, separating eastern New Orleans from the rest of the city, and onto Chef Menteur Highway, which ultimately bifurcates the section of Wilson Avenue where Broom is raised.

This is no empty gesture. Though New Orleans is a city prone to its own myths—ones that tend to traffic in Southern Gothic lore—New Orleans East, according to Broom, has often been but an afterthought within historical and contemporary imaginings of the city at large. This map seeks an intervention, contextualizing a specific geographic location as it argues against the notion that New Orleans can be understood without understanding New Orleans East.

Thus, to trace the shape of this city and, by consequence, herself, Broom moves along a relatively chronological sequence that begins with her maternal grandmother, Amelia, also known as Lolo. In this way, The Yellow House commences with genealogy as a means through which we might chart the world that was before the existence of our narrator, even if that timeline contains gaps. For example, Lolo’s mother, Rosanna Perry, we learn, is thought to have died in childbirth, though there are no records to confirm this suspicion. It is only known that she disappeared. Even the facts surrounding Lolo’s own birthday in the early part of the 20th century are nebulous—Lolo claims one date, July 1916; official record cites another. This does not trouble Broom. “Fixed details were important to stories Amelia knew,” Broom writes, “even if you couldn’t prove them.” To tangle with shadows is part of what it means to tell the story of the Black South.

New Orleans East, as it was advertised, promised a new paradise to potential homeowners. The publicity machine around the development effort, in Broom’s recounting, went to great lengths to sell itself. However, the story of Broom’s “East,” as she would come to call it, does not begin with the glamour of advertising. It begins with her mother, Ivory Mae—Lolo’s daughter—eight months pregnant, newly widowed, and in search of space for her growing family.

4121 Wilson Avenue, the house that becomes the Yellow House, is not possible without mapping this lineage. And so, Broom structures her memoir as four movements that follow her relationship to a place of refuge, even if imperfect, for her family for decades. In choosing to begin her story in the world before herself, Broom implicates a host of protagonists and the choices they have made in the processes of world making and, as a result, the world that Broom, the youngest of Ivory Mae’s 12 children, has inherited.

Of course, the house itself is a central character in the narrative, and siblings, aunts, uncles, and friends become a chorus. But it is Ivory Mae, whose voice punctuates throughout passages, who offers the effective, poetic meta-commentary. Her words, demarcated in italics, allow readers to glean the story beneath the story even when it is clear Broom struggles to make meaning herself. It is Ivory Mae who offers the poignant account of the death of Broom’s father, for example, that shapes Broom’s understanding of her station in this familial line as “the babiest,” one who must rely on the memories of others to inform the investigations of her origins. Mae’s reflection, “Blood built up. He had too much blood. I just kissed him and walked out the room. And I said, That’s it,” despite its brevity, speaks to the magnitude of loss that Broom works to reconcile all these years later.

Each movement is subsequently divided into smaller chapters through which we peer further and further behind the veil as Broom’s use of reportage, oral history, and archival (family) images moves us across time. We are allowed inside the Yellow House to learn that before she became Sarah, “on the first day of kindergarten,” she was Monique. We see Broom in a heightened moment of Christian fervor during her tenure at Word of Faith High School. We learn of Broom’s older sister Lynette’s first escape to New York City to attend college, and we witness the consequences of older brother Darryl’s drug addiction. All of this world is contained by the Yellow House—“Ivory Mae’s thirteenth and most unruly child”—as transitions take shape in the lives of its former and current inhabitants.

At times Broom wades, perhaps a bit too deeply, into the ancillary occurrences of her chorus. She is at her sharpest when she confronts her own relationships to this house, in this city, and the tensions each site holds for her. Such tension embodies itself initially as a yearning for that which lies beyond the East and undergirds her first departure from New Orleans to go to college in North Texas. Still, as the Yellow House changes, as the city of New Orleans changes, distance from home is the primary vehicle through which Broom processes instability. But how do you mourn a place that’s still there without you? And what does it mean to mourn from afar?

Insomuch as The Yellow House is a reckoning with home and family it is also a reckoning with grief. Broom contends with the impact of loss across many registers. Simon Broom, her father, looms large as his life and death continue to reverberate inside the Yellow House. This presence is felt especially as the Yellow House itself slips away and new sense of impending loss settles. “Traces of my dead father were everywhere in the house—a door sanded but unpainted; holes cut for windows, the panes uninstalled—like songs cut off right at the groove,” Broom writes. And it is the death of her childhood friend Alvin, the result of a car accident on Chef Menteur Highway in the fall of 1999, that marks the last season she would sleep at the Yellow House as a resident.

Broom and Lynette are in Harlem when Hurricane Katrina lands ashore in New Orleans and the Gulf Coast in 2005 and “water entered New Orleans East before anyplace else.” “Movement III” successfully ushers in a crescendo as Broom gives shape to the force of water that forever changes her home. As she writes through the streets of New Orleans East in the wake of Katrina, Broom focuses our eyes even more tightly on her map, point after point, as siblings leave the neighborhood, Lolo passes on, and an entire city attempts to breathe again. “Look like nothing was ever there,” Ivory Mae says upon reflection as the Yellow House is knocked down after the storm.

In Katrina’s aftermath, family members scatter to California, Texas, and other parts of Louisiana. Again, Broom struggles to make sense of loss: “I am so rattled and destroyed by what happened to our family that I don’t know how to help or what to do with my body and mind. I sought oblivion: the opposite of knowing.” Self-exile, unlike the immediate displacement faced by others in the family, leads Broom to another pivotal departure when she leaves Harlem for Burundi after receiving a serendipitous job offer at an independent radio station in the East African country.

It is while in Burundi, often alone and mostly silent absent the necessary language skills, that Broom is deeply compelled to tread the chasm between the home she once knew in one way as a girl and the home waiting to be confronted after Katrina. “What I sought in Burundi,” Broom writes, “was understanding from people, who, I reasoned, ought to already know how to resolve the loss and migration I was reacting to. But this could never be true: the people who knew, my family, were still in the place where I left them.” This is Broom’s grappling, the query that brings her back from Burundi to work in Mayor Ray Nagin’s City Hall in 2008. She only lasts six months before returning to Harlem, still disillusioned about her relationship to a place so wildly different from the one she first left years ago. Though it is this same question, I imagine, that begs her to return to New Orleans again three years later, in 2011, to learn a city and herself anew, as if distance had become a shield too heavy to uphold any longer.

On what terms, Broom asks, do you return to a place that no longer physically exists? I found myself returning to Ivory Mae, who, for a moment, takes center stage to tell the story of the Yellow House’s last days:

In its absence, then, those who have called the Yellow House home are in constant revision as they form a new language to make sense of their relationship to a structure that no longer stands. Sometimes, Broom concludes, you cannot return home with resolve, but rather only with questions to be answered. This book is Broom’s outpouring.