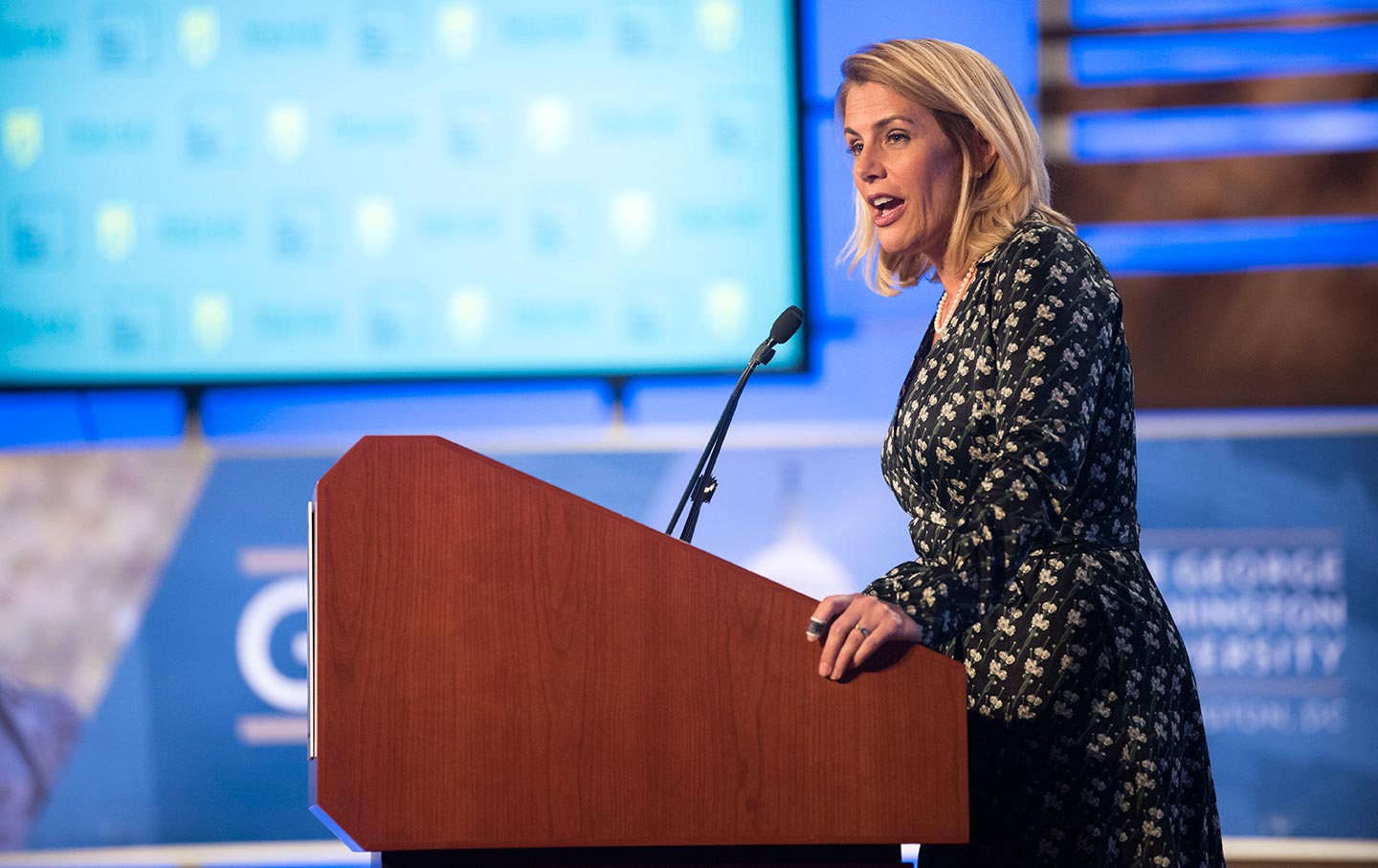 Sara Nelson, the international president of the Association of Flight Attendants–CWA, honors the Sunrise Movement at the 2019 Henry A. Wallace Award ceremony on May 6, 2019. (Kevin Wolf / AP Images)

When I mention Sara Nelson, the president of the Association of Flight Attendants (AFA-CWA), to people in the labor movement, the response is usually something like: “I would follow her to the gates of hell.”

For a few years I’d heard union members and staffers rave about Nelson’s fearlessness and willingness to show up in support of others, but she became a progressive superstar only in early 2019 when she called for a general strike to end the government shutdown. In the Trump era—with so much of organized labor wanting to see what it can extract from the president’s alleged populism—advocating for such a militant action made her instantly famous.

I sat down with Nelson in late April when she was in New York City for Organizing 2.0, a training event for organizers, agitators, and communicators. When I arrived at the LCL, the bar at the Grand Central Westin in Midtown Manhattan, she and a staffer were tucked at a table in the back, waiting for soup and grilled cheese. Petite and blond, Nelson wore a gray-jersey pullover and a hot-pink scarf. She rose to hug me before we settled in with a couple of glasses of Malbec.

She shared personal stories comfortably and laughed easily, but when she talked about conflict—like the time she brought six retirees to confront the CEO of United Airlines—there was steel in her voice. It reminded me of how often women like her are underestimated and how, when they’re smart, they can use that to their advantage.

What’s It Like to Be Young, Queer, and the Mayor?

Her savvy was evident when she released a video calling on flight attendants to stop working alongside the sick-outs of air-traffic controllers. Just hours after the clip went live, Trump cut a deal to end the shutdown. Nelson had a simple explanation for why her threat was so effective: “There was a real danger that people were going to get a taste of their power, and they did not want to have that happen.”

I’d met Nelson last year in Baltimore at the Congressional Progressive Caucus Strategy Summit, a mostly off-the-record event where Nelson spoke about the labor movement’s efforts after Hurricane Maria in Puerto Rico. When I reminded her of it, she repeated what she’d said then: that she was able to get a plane to bring union volunteers to the island because the CEO of United Airlines takes her calls—not, she laughed, “because I am a nice flight attendant and somebody that he likes hanging out with. It is because I gained his respect by beating him at the bargaining table.”

It’s that swagger and combative language—no talk of “value propositions” or “both sides”—that epitomizes the renewed fighting spirit in the labor movement. That audacity has largely come from female workers—from teachers, retail and hotel staff, nurses, and, of course, flight attendants. While Trump and much of the media caricature the working class as white men in hard hats, today’s rabble-rousers are really service and care workers. 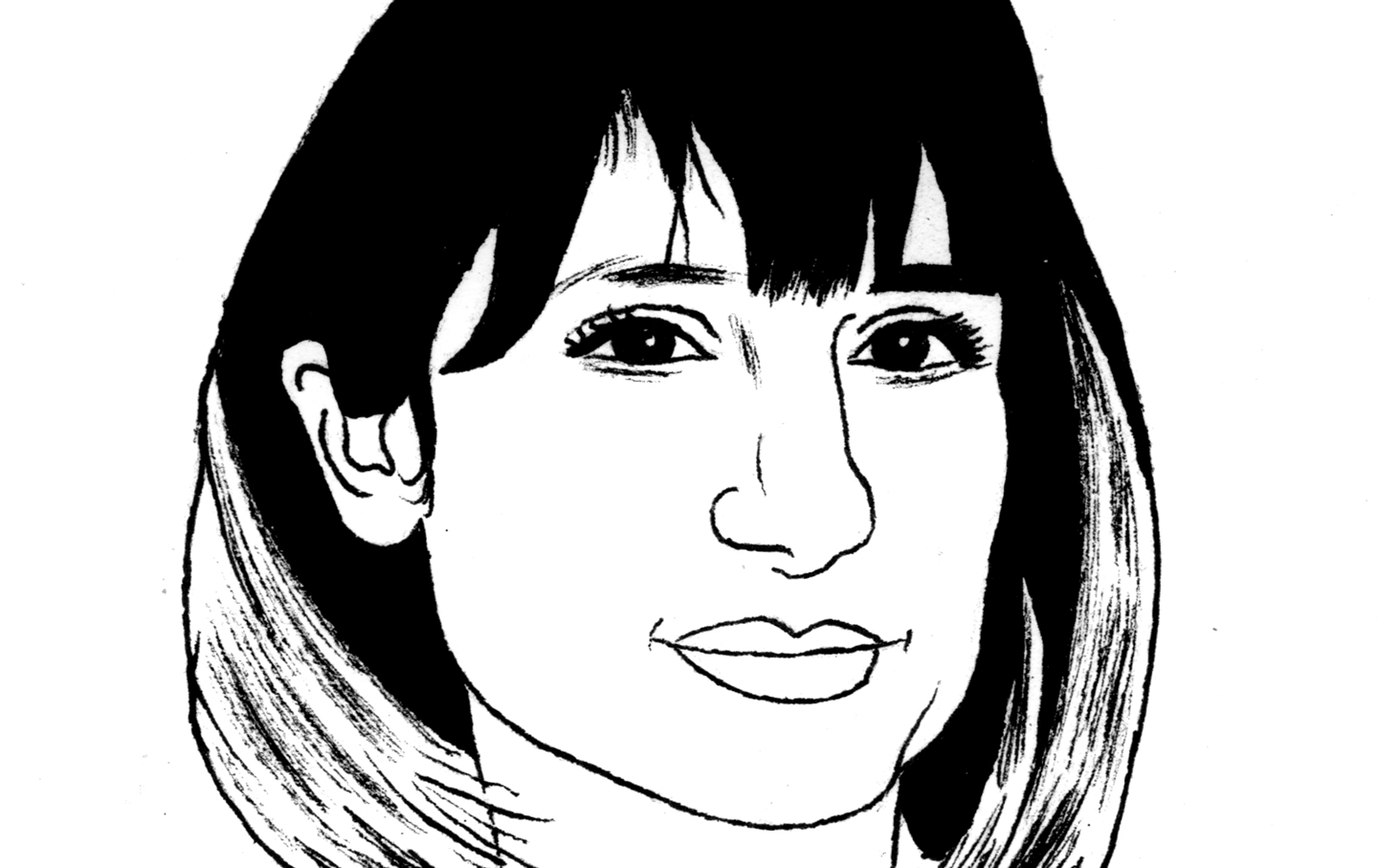 From Black Lives Matter to the Fight for $15: Why Americans Are in Revolt

Despite growing up with a mother who was a union teacher and a father who was a timber worker, Nelson wasn’t aware of the power of unions until she took a job with United Airlines. “I went to the interview based on the contract that the union had negotiated, but I didn’t have any consciousness that it was the union that did that,” she said. “I simply knew that United had the best pay in the industry.”

In 1991, she left home in Corvallis, Oregon, to attend a small college in southern Illinois, where she studied to be a teacher and assisted at a school in downtown St. Louis. She said it taught her that “we actually do live in a class society, and that racism is part of that.”

Staring down massive student-loan debt and working four jobs, Nelson decided to become a flight attendant when her friend, already a United employee, told her about the job. The next day, she headed to Chicago to apply. By her first payday, she was down to her last $12. But her paycheck didn’t show up: “They told me, ‘You are on probation. Don’t make a stink.’”

She had to rely on plane food, friends, and the occasional date until the next payday—but her check still didn’t arrive. In tears, she went to the office, where again they shushed her. Another flight attendant tapped her on the shoulder: “She hands me a check for $800 and she says, ‘Number one, you go take care of yourself. Number two, you call our union.’” Nelson said she learned that day, “In a union, you are never alone.”

By the time her six-month probation period ended, she was a union activist, and the union was in contract negotiations. “I went straight from the exit interview, got onto the picket line, and ran chants the rest of the afternoon,” she said. But the contract was a disappointment. Some of her colleagues gave up on the union, but it only made her demand stronger.

Confrontation has shaped Nelson as a labor leader. She joked that she’s spent her career trying to strike, but the AFA’s pre-strike buildup—a strategy known as Create Havoc Around Our System, or CHAOS—has always proven effective enough to get management to concede. Labor, she said, tapping the table for emphasis, needs to have “continual fights” and engage members in those fights. Workers who are disconnected from the struggles that build the unions, she said, will too easily forget how victories are won in the first place.

But, she stressed, building a stronger labor movement is not only about the clashes. “I think what people have to remember is that the strike is the tactic, the solidarity is the power,” she said. To be effective, Nelson argued, that solidarity has to be built within and across unions. That means fighting for miners’ pensions and health care, as well as bringing flight attendants’ unique experiences to make a case for the Green New Deal.

“The people that I represent are connected to everything,” she said. “This is not just ‘Do you believe in science or not?’ We can actually tell people what [climate change] is doing right now.” Flight attendants are often torn between staying in the job they love—she calls it “the bug” for flying—and enduring the effects of climate change as flights are increasingly rocked by violent turbulence.

Flight attendants, she told me, also have to mediate conflicts in a tiny space: “We are also in this unique position where we say, ‘Guess what? We have to get from Point A to Point B, and if you actually want to make it, you have got to figure out how we are going to do it together!’”

It’s that particular experience, the emotional skill of service and care workers, that Nelson wants to lift up as she gains prominence. Rumors abound that she’s being pushed to run for AFL-CIO leadership, where she would be the first woman and first service worker to head the federation of 55 unions and more than 12 million members. “The people who have been marginalized their whole lives have had to figure out how to make it work. You are bound to be more creative. You are bound to have less ego, because egos often get in the way of solutions. We are ripe for that leadership,” she told me.

One thing she doesn’t want to do is focus on electoral politics. The 2020 primary is already being litigated, but to Nelson, labor’s business is not in endorsing candidates but in raising workers’ expectations on the shop floor. “People—who have seen both parties totally fail them, who are told, ‘Just wait for the next election’—have seen immediate results when they take action together. I have been saying over and over again, ‘Start in the workplace and politics will follow.’”