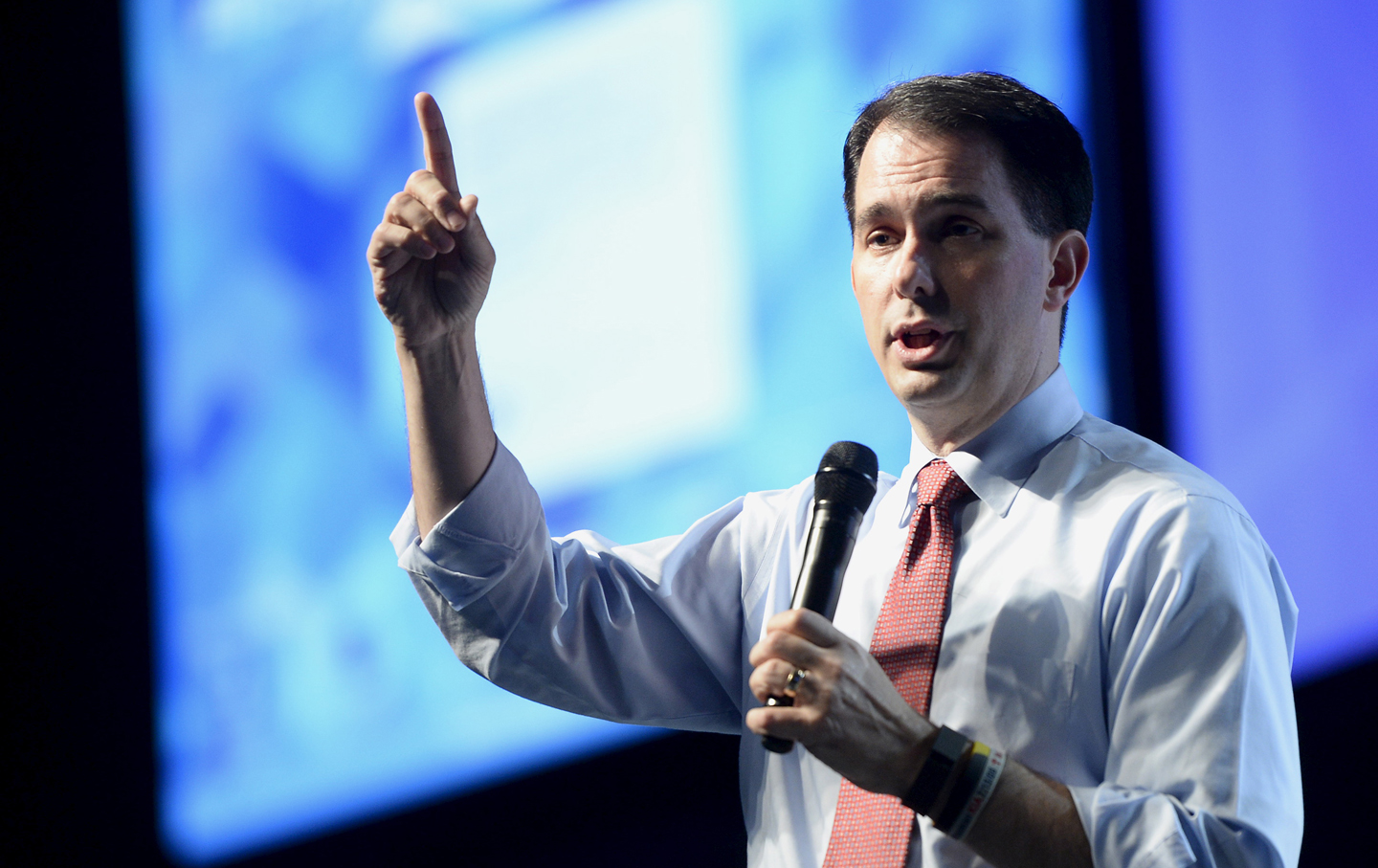 Back then, Walker paid little attention to Sanders. But the senator from Vermont talked a lot about how much he would like to run against the governor of Wisconsin. “I would love to debate Scott Walker,” Sanders said in 2015. “I would really like to debate with him about labor rights.”

A year on, Walker is a 2016 footnote—out of the race nationally and struggling with low approval ratings in his home state.

Sanders, on the other hand, is still in the race as an insurgent contender who has won 15 primaries and caucuses and secured more than 1,000 pledged delegates. The senator from Vermont is still running an uphill race—former secretary of state Hillary Clinton has won more states and more delegates—but polls suggest he could win a Wisconsin presidential primary on a day when Scott Walker won’t even be on the ballot.

“(When) a governor attacks teachers... it doesn’t make him a leader. It makes him a bully.” — Hillary Clinton

But, as Wisconsin’s April 5 primary approaches, Sanders is still running against Walker—and against the anti-labor, anti-public education, anti-public services austerity agenda of a Republican Party so toxic that it has become a host for the likes of Donald Trump and Ted Cruz.

“I think that Scott Walker is a symbol of almost everything that we are opposing,” Sanders explained as he arrived in Wisconsin. “This is a guy who has been vehemently anti-union at a time when we need unions to grow—so they can provide decent wages, working conditions for people. This is a guy who has been very much into voter suppression—making it harder for people to participate in the political process at a time when we need to increase voter turnout. This guy has been an ally of the Koch brothers—one of the great reactionary forces in America, [billionaires] who are trying to move this country in exactly the wrong direction. So you see in Scott Walker what is exactly wrong in the direction that [conservative Republicans] are moving.”

But the real ripping on Walker is going on in the Democratic primary. Clinton brought Walker up a number of times when she and Sanders debated in Milwaukee in February, earning loud applause from Democrats and Democratic-leaning independents who have for five years rallied, marched, and voted against the governor. And Clinton continues to complain about “Scott Walker and others trying to rip out the heart of the middle class by making it impossible to organize and stand up for better wages and working conditions.”

“I think that Scott Walker is a symbol of almost everything that we are opposing.” — Bernie Sanders

The Clinton campaign has aired a Wisconsin television ad that says, “Wisconsin schools face the biggest cuts in history—because of Scott Walker. Hillary Clinton’s got different priorities for this country. Education means a good job, a decent living. So here’s what she’ll do: pre-school for every child, invest in great teachers, and college without crushing debt.”

At the state Democratic Party’s annual “Founder’s Day” dinner on the Saturday before the primary, Clinton announced: “We believe that when a governor attacks teachers, nurses and firefighters, it doesn’t make him a leader. It makes him a bully.” And she drew cheers when she announced that, if she is nominated and if she becomes president, she will devote time and energy to helping state parties challenge Republican governors like Walker.

Sanders, an ardent critic of Walker since 2011, when the governor attacked labor rights, public education, and public services at the start of his first term, told the Democratic dinner crowd, “Now if you want to know what kind of president will I be—think about all the things Scott Walker does, and I will do exactly the opposite.”

In particular, Sanders has used his Wisconsin campaign stops to condemn assaults on voting rights by Walker and his legislative allies.

“Democracy means one person and one vote and whether Governor Scott Walker likes it or not that is exactly what we are going to bring to every state in this country, including Wisconsin,” says the senator. “I say to Governor Walker and all of the other cowardly Republican governors: ‘If you cannot win or participate in a free and fair election where everybody votes, get out of politics and get a new job.’”

And the senator attacks Walker for his ties to wealthy conservative donors as part of a broader battering of the current campaign finance system.