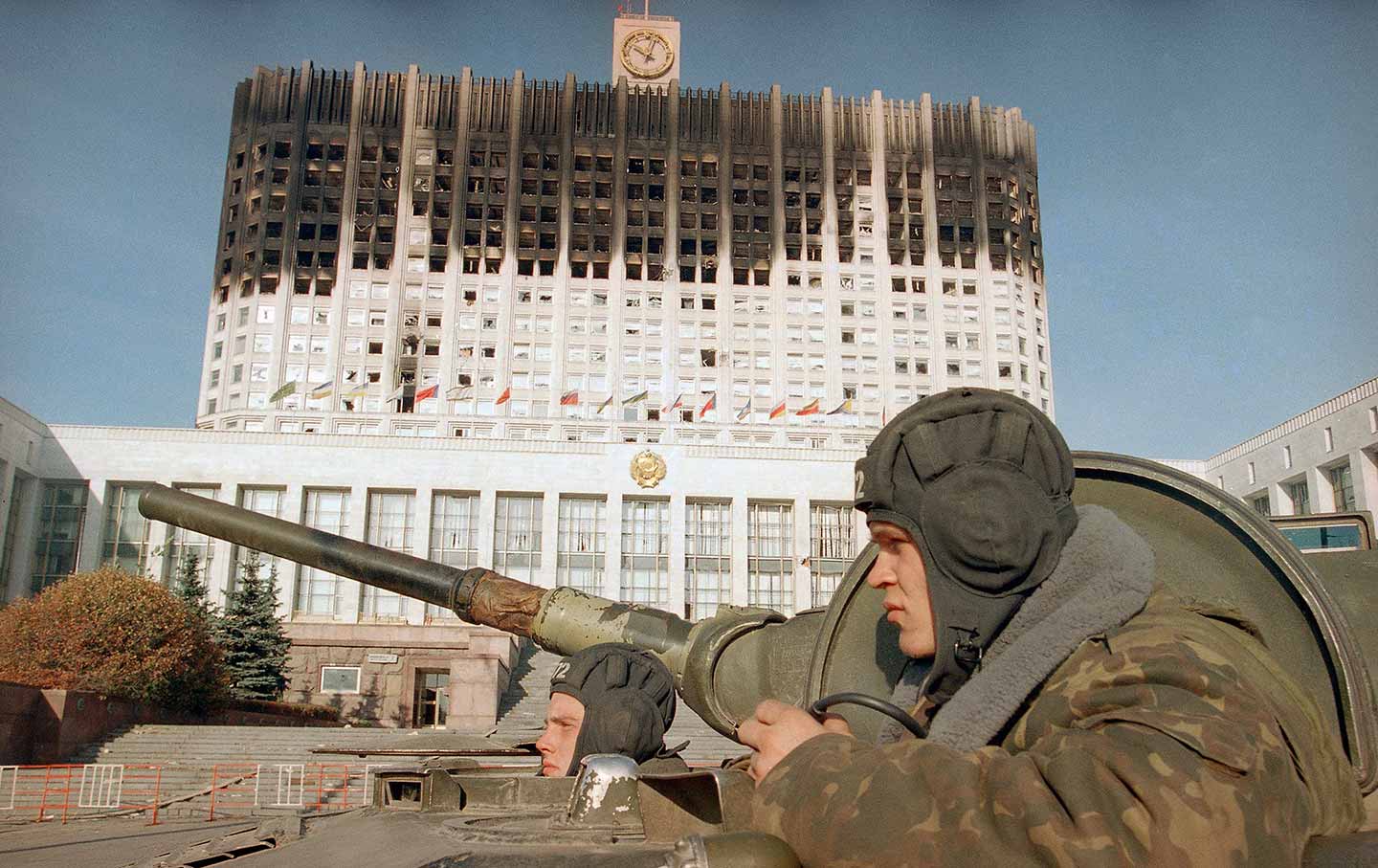 Soldiers outside the Russian White House on October 6, 1993, following attacks on the parliament building in the preceding days. (AP / Michel Euler)

On October 3, 1993, Mark Shteinbok, a photographer for Ogonyok magazine, with whom I had traveled on assignment many times, was wounded while taking photos of Russians storming the Ostankino television center in Moscow. When I heard he was injured, I rushed to the ER at Sklifosovsky hospital. There were a dozen men in the ward—mostly young, many heavily wounded. I soon learned that, while some men had gone to defend independent TV, many others had come from the suburbs to take it over. Though the violence was over, they all faced complicated surgeries now. The smells of disinfectant, medicine, and approaching death hung in the air. I looked out the window and saw smoke rising from the parliament building, known as the White House, which government tanks had just shelled. I was afraid. I knew that something irreversible had happened to us.

I often think about that day: the day when Russia’s nascent and naive democracy died. The shelling of the parliament and Ostankino was the culmination of a political crisis brought on by two clashing forces—President Boris Yeltsin, supported by the government of Viktor Chernomyrdin; and the parliamentary majority headed by Ruslan Khasbulatov, which did not agree with Yeltsin’s reforms and was supported by Vice President Aleksandr Rutskoi. On September 21, Yeltsin dissolved the Ninth Congress of People’s Deputies, in violation of the Constitution. Soon after, the parliament announced that the president had been removed from office and charged him with a state coup. On October 3, supporters of the parliament led by General Albert Makashov seized Moscow City Hall and tried to take the TV center. A state of emergency was declared in Moscow, and troops descended upon the parliament. It was over on October 4. A new constitution, still in force today, gave the president broad powers and eliminated the post of vice president.

As we try now to understand why things that were unthinkable not long ago are happening now—why democrats and reformers are accused of treason, why freedom is equated with theft while real theft is equated with patriotism, why people once again do not trust courts or the police, why fear is back in daily life, and why portraits of Stalin are appearing more frequently in the streets—we must remember the bloody days of October 1993. The beginnings of what is now called Putin’s Russia came with the first shell strikes on the parliament and with the attitude of Russian citizens toward those events.

The early years of the market had come as a shock: The economy collapsed, and unemployment, criminality, and poverty soared. Back in the USSR, people lived poorly, but they did not starve, and the government provided their education and health care. Freedom, for which many were prepared to suffer in 1991, was a synonym for a just and prosperous life. Yet the leaders of the new economy were not the romantics of perestroika but the old Soviet directors and greedy media owners, often working in tandem with the mafia. There was no discourse in the society; many of the issues of the perestroika period remained unresolved. There were no trials of the Communist Party or the KGB, which had been expected; there was no reform of the judiciary or local administration. Social issues were forgotten. 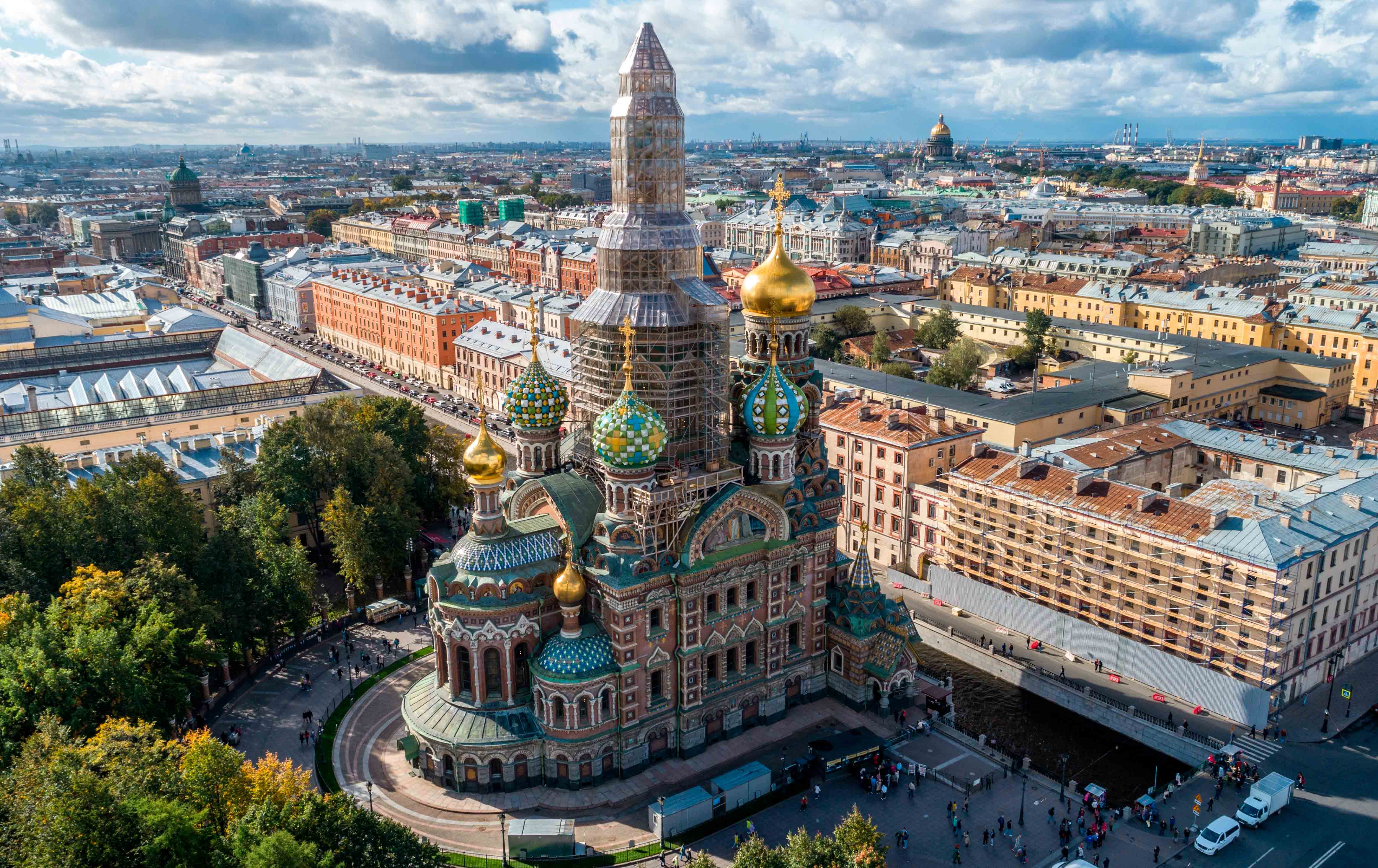 Dialogue Is the Best Medicine: Citizens Speak Out Against Reinvigorating the Cold War

Many people feared there would be a return to Soviet-style socialism, with its inevitable repressions, and saw its embodiment in the parliament opposed to Yeltsin. Almost all of my Moscow teachers and older colleagues supported Yeltsin’s decision to shoot at the rebels in the parliament building. Three famous dissidents, Andrei Sinyavsky, Vladimir Maksimov, and Pyotr Abovin-Yegides, who had suffered many years of official hostility, wrote an open letter stating that a democratic regime cannot shell its own parliament without consequences. No democratic publication would print it. The letter appeared only in Communist Pravda, and the authors were shunned by their previous admirers. “It had to be done to keep the Communists from taking power” was the motto of the progressive intelligentsia in 1993. In practice, this was no different from the Stalin-era slogan “the end justifies the means.”

The restoration of Soviet-style politics and social discourse did not begin under Putin—either in 2012 after electoral violations or in 2014 after the annexation of Crimea. It happened in 1993, when the “thought leaders” and citizens approved those first shots. The president’s almost unlimited powers; manipulated elections, which involved highly paid spin doctors; the triumph of “the family,” or Yeltsin’s close circle; the absence of transparency in all aspects of life—these all happened in the 1990s. The murders and persecution of independent journalists and anti-corruption activists began in the mid-1990s. The first victims were the cameramen and photographers at the White House and Ostankino. The journalist Vladimir Snegirev wrote about his friend, the Irish cameraman Rory Peck, who was killed at Ostankino. The attackers shot them, knowing they were the press. No one was punished, and eventually people got used to the impunity of killers.

We still don’t know the number of victims from that bloody October. Police said at the time that 187 had died and 437 were wounded. Unofficial sources put the death toll as high as 2,000. Recently a young State Duma deputy proposed paying compensation to the victims. The parliament declined the proposal because the concept of “victim” and how to define it was not clear. Meanwhile, justification of violence in all forms appears daily on Russian television.

Equally dangerous is the fact that the country has never fully reckoned with the events of 1993—nor, for that matter, has it faced up to the repressions of the Stalin era, the persecution of free thought, the gulags, and the treatment of humans as working materials or obstacles in solving geopolitical problems. This profoundly Soviet understanding of the relationship between state and person has won today in Russia, and it is being maintained by propaganda. The lessons of the tragedy of October 1993 have to be learned. This does not depend only on the authorities but on our citizens.