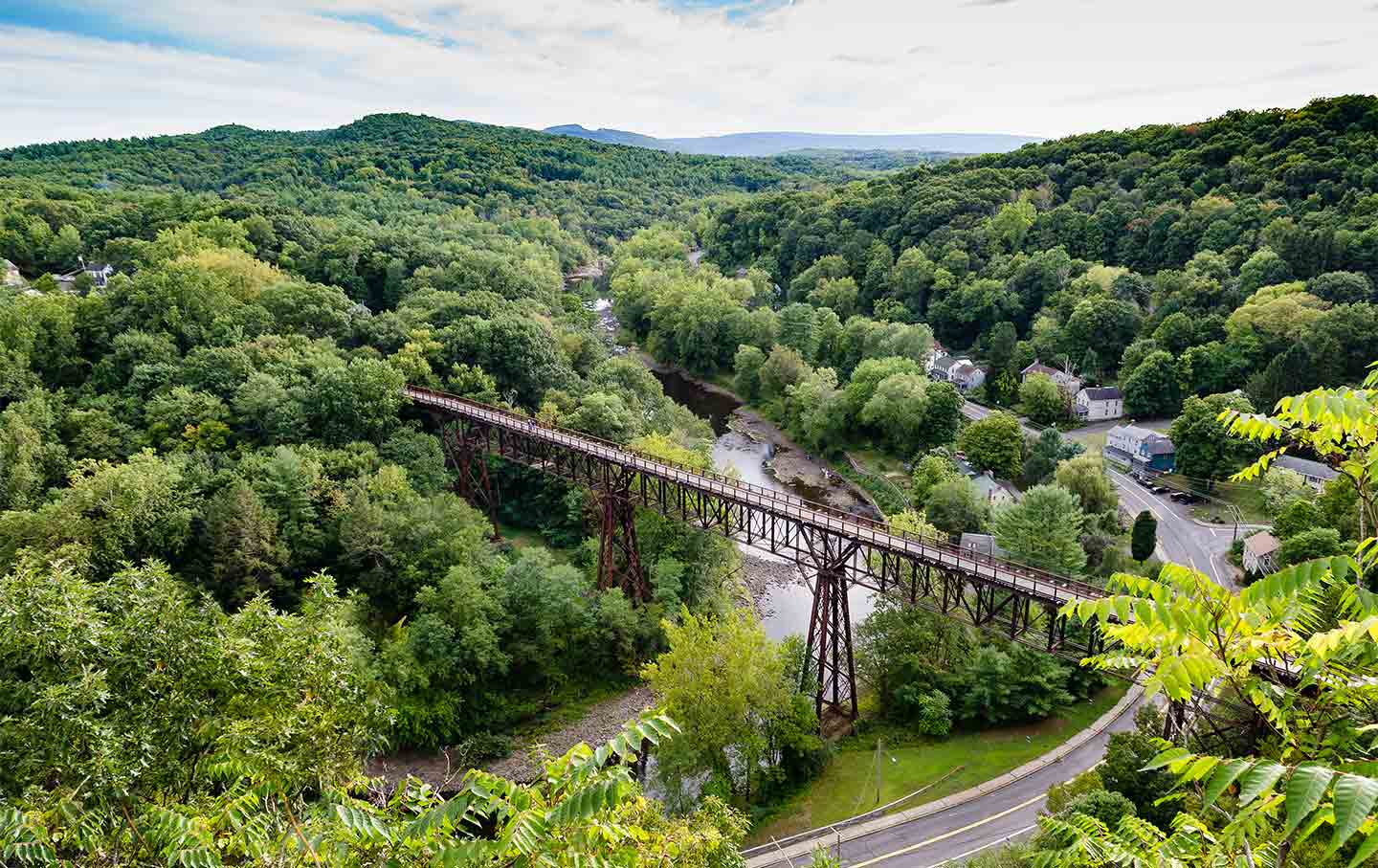 Rob Handel, who lives just up the road from me, is that rarest of rural residents: a bright, educated young person who has actively chosen to live in the small Catskill Mountain town where he grew up. He’s also openly gay and a Democrat.

“I do miss things a city can offer, but I’ve satisfied a lot of those needs by building a community here,” says Rob, 28. “I’m interested in permanence.”

I first met Rob two or three years ago when he came to a town board meeting to protest what he regarded as the high-handed running of a local museum. Of medium height, a bit on the stocky side, and with an impish face framed by a dark beard, he argued his points with notable clarity. Since then, I’ve come to know him as an outstanding chef—he works at a farm-to-table restaurant a few miles from here—and as a budding entrepreneur with a growing catering business.

If rural areas like mine are to have an economically viable future, they need people like Rob who not only can find ways to make a decent living here, but who also bring energy, enthusiasm, and fresh ideas to their communities. But whether he is a harbinger of the future—part of the wave of organic farmers, artisans, and others who are helping to revive towns including Catskill, our county seat—or whether he is an anomaly and will remain so, is open to debate.

All Politics Is Local

Searching for Common Ground on Impeachment in NY’s 19th

Notes From a Small Village: The Meet-and-Greet

From 1990 to 2010, according to US Census data, the number of people in our town between the ages of 25 and 34—in other words, young adults who have put down roots—declined from 14 percent of the population to 7 percent. And those who left are likely to have been among the best and the brightest: According to Rob, almost all his high school acquaintances who were in advanced placement classes went off to college and never returned.

Such facts have implications for politics, not just economics. “In high school, I thought I was a conservative,” says Rob. “For most of my life, I’ve been a straight white male. I came out around the same time I moved back here. In Hartford [where he went to college], I met people of color and began to appreciate more just what injustices exist. Hartford opened a new world to me.”

Like Rob, 19-year-old Brenna Rustick is locally born and bred, but she’s much less certain about her future. A commuter student at a college in Albany, she works up to 25 hours at a local gas station/deli to supplement her scholarship and loans and hopes to go to law school after graduating. She started attending town board meetings when she was 14 and got more interested in politics during the 2016 presidential campaign. It was then, she says, that she realized that her opinions on women’s issues and education, among others, made her a natural Democrat. She’s rooting for Pete Buttigieg in 2020. “We need younger people” in office, she says.

She herself recently tried to become one of them: In our local elections earlier this month, Brenna ran as a candidate for one of two town board seats. She didn’t win—the board remains completely Republican—but she came in a respectable third and hopes to eventually build a political career. “I just think it’s important to be involved if you want things to be different,” she says.

Will that be here in Durham? Brenna says she doesn’t know. Through her part-time job, she says, she’s begun building the kind of network of acquaintances that would prove useful in any future campaign. But at the same time, she’s thinking about possibly moving to California, or at a minimum traveling in Europe before settling down. “There is nothing to do here,” she says. “I have friends in Cairo [the only town of any size in the immediate area], but about the only things to do there are to go for ice cream or walk around the Dollar General Store.”

Brenna’s friend Zoe Haller says she has no interest at all in politics and she’s never even heard of Pete Buttigieg. But on one thing, the two are in accord: “There is nothing to do here,” Zoe says, explaining that she plans to move away—“maybe North Carolina”—just as soon as she finishes her social work degree.

A few years ago, our town’s only elementary school closed because there were so few students that a decision was made to send those who were left to a neighboring town. And since then, student numbers in the combined school have continued to plummet. To me, that’s an indication of a dying community—one that is not going to be transformed by the growing number of urbanites from New York who are buying second homes here. Indeed, in a recent town survey, second-home owners made it clear that the biggest reason they like it here is the town’s rural character, which they don’t want to see change.

But where does that leave young people like Brenna and Zoe, who long for a movie theater, a juice bar—anything to liven things up? And where does that leave an economy which for the last century has seen farming in decline and found nothing comparable to replace it? I would like to believe that in the coming years I’ll be meeting more Rob Handels, but right now I think it’s more likely that I’ll be saying a lot of goodbyes.