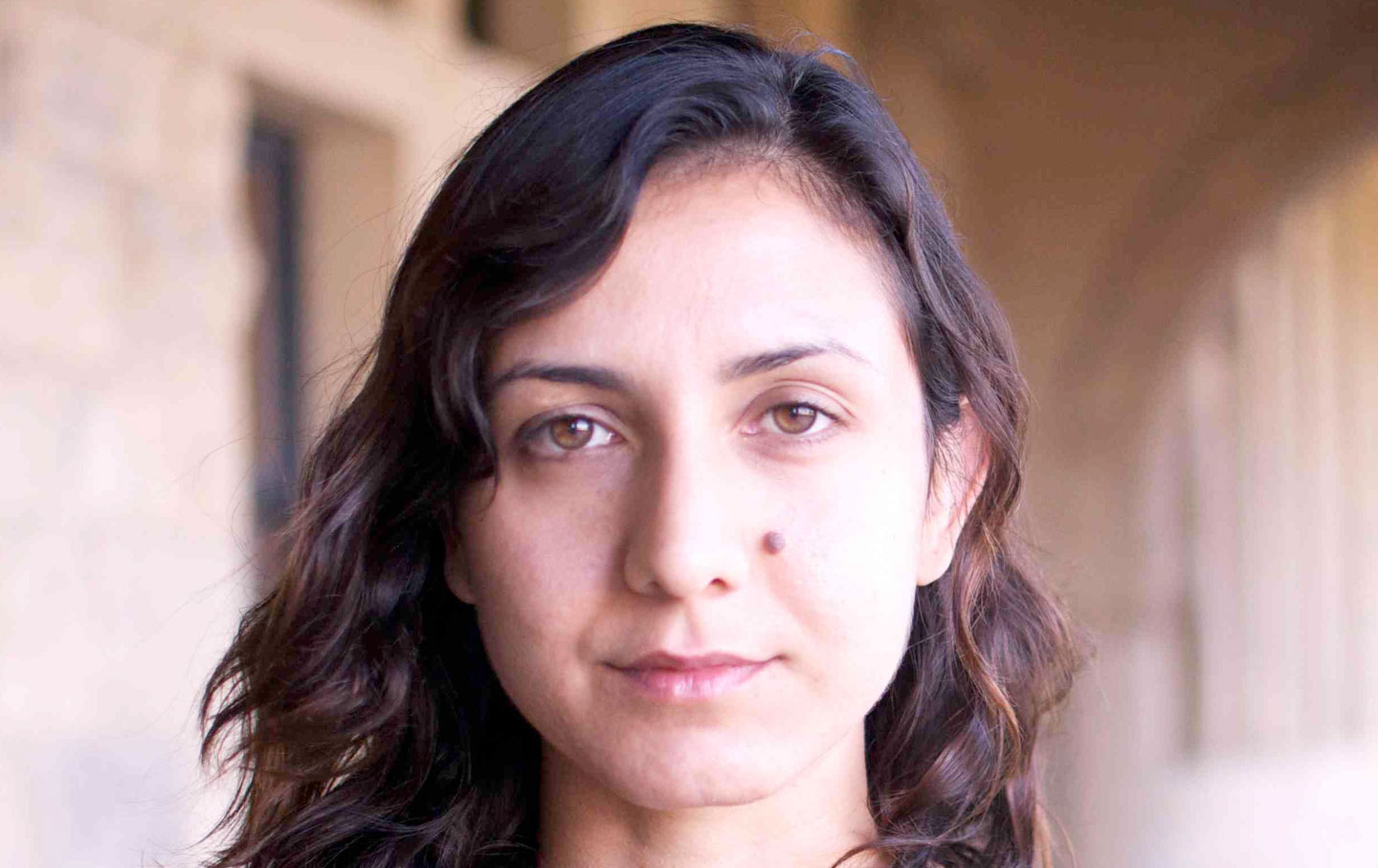 Ottessa Moshfegh, as on display in her short stories, is a writer of striking precision and acute sonic sensibility, of generous intuition, and of great comedic skill. But readers may often feel, as I have, the impact of her work to be something of a private effect: Those same stories, presenting extraordinary talent and often telling of the markedly unusual or the socially outrageous, are also so very quiet. The work calls little attention to its own movements, with almost no overt signaling to the reader—neither awe nor shock nor laughter implied in the text, where certainly the audience experiences one or all. We see this perhaps most often in the form of details that arrive at a surprising perpendicular to others. A line from her recent short fiction, “The Surrogate,” reads: “It was a weird crowd—freaks edged out of the LA scene, kinks from the valley, middle-aged ravers, tech rats on acid, kids on E, old women, the usual hustlers.” Indeed, perhaps “old women” are the usual hustlers, but they are not the usual literary symbols, and Moshfegh makes us believe her by disrupting expectations without notice, by simply stating the world she creates, unex­alted. Her narration—including, impressively, when in the first person—maintains a slight distance from each story, and these fictions could in fact be described as deadpan.

Her first book, a novella called McGlue published last year, is a work of genius. And it feels even more unmediated. The story of a mid-19th-century drunken sailor—lyrical and blunt, lush and bludgeoning—it passes as a masterwork of the American Renaissance but for a modern immediacy. Unhemmed by grammar, by dictionary, and by orderly thought, it seems not a tale told, but a tale happening in time.

Moshfegh’s new book and first full-length novel, Eileen, is quite different in this regard. It is the story of a young woman trapped—by duty and inertia—told by her older, wiser self. Eileen lives in X-ville, the “brutal cold town” of her childhood, to which she returned to care for her dying mother and in which she has since stayed, becoming the de facto minder of her father, a hobbled, insatiable drunk—the kind who would likely die if he stopped drinking, and would certainly die a drinker’s death. She spends her days working at a juvenile-detention center, a prison for boys, alongside perturbed old ladies, former juvenile offenders, and menacingly Catholic figures of authority.

The promise to the reader, from the book’s opening pages, is that our heroine will escape: In Hollywood-raconteur style, the elder Eileen, who takes care to say that her life is now “beautiful,” her experiences broad, tells us: “This is the story of how I disappeared.” Because the novel is filtered through the protagonist in later years, the marks of a storyteller are everywhere—Eileen is peppered with flags, signals, and narrative assessment. “I’ll begin my story there,” she tells us. “This isn’t a story of…”; that “is not the point of this at all.” “You know me,” she winks, and because the narrator is indeed a character, lines that would be cliché in another context—“This is not a love story,” for example—have a built-in allowance. This voice is completely believable, though in the book’s first half it can be tiresome. The elder Eileen is emphatic, and somewhat repetitive, as real storytellers are.

Moshfegh is in part playing with convention. Her success in that game is not thoroughly apparent until the book’s final third, its full reward not until the work’s ultimate pages. But the narration can have a direct, clear-cutting power—“I was a peon and I was a child, but I was not a coward”—and her retrospect lends to a cinematic view: The character of Rebecca, who, we are forewarned, will catalyze Eileen’s escape, “whirled off her coat as though in slow motion—this is how I remember it—and shook it like a bullfighter.”

The word-by-word language of Eileen is far plainer than that of McGlue—­absent that work’s aural divinations—and less exacting than that of her short stories, where the telling is rather straight but a single declarative sentence, or word, often changes the import of two, 20, or every line before it. But Moshfegh’s rhythm is still seamless, the moods she sets pervasive. And Eileen’s world is richly bleak. Objects are granted their own auras, as they have in life: Paper snowflakes made by the prisoners are “angry geometries, little acts of violence”; Eileen imagines a “motorcycle steaming out in front of the house, melting the whole town to hell.” The grotesque, of which there is much to be found, is described unsparingly:

I caught then a weird vision of my father—pale, naked from the waist up, thin and frail but full of tension, jolting slowly past the living room windows with a bottle in his hand. He seemed to have grown small breasts. And when he turned, I thought I saw long purple bruises up and down his back.

Strange facts of the greater world are deftly distilled, as if they were truisms known by all: “You can always tell something when a woman is overdressed—either she’s an outsider, or she’s insane.”

Eileen’s father is a source of continual grief, taunting her, relying upon her, terrifying local children, and suffering. Their house is a site of maximum slatternly disorder—it is the shelter of two people who do nothing but sustain themselves, barely, and take their most ready pleasures. For each this comes in a type of noxious drink: for the father, his bottled poison; for Eileen, alcohol as well, but in greater part the fumes of filth itself—the outward symptom of isolation. She takes private pleasure in the release of her own excrement—in shitting in the dark basement, with the aid of laxatives; in peeing “honey-colored poison” into an open jar in her attic room. Going days without bathing feels to her a personal indulgence, and she wants to “hike up [her] skirt and move [her] runny bowels all over the linoleum floor.” Filth is her rebellion—against the socialized world of people, among whom she can pass but as yet has no place—and a type of masturbation, a deeper immersion in loneliness, one that in its ripe sensations is more alive than living “clean” and equally forsaken. She finds private solace in whiffs of death as well, keeping a frozen, dead mouse in the glove box of her car as a sort of amulet. She says of a photograph of a murder: “I wished I could get inside of it, examine the throat where it was gashed, touch the blood, investigate the wound as though a secret were embedded there.”

It is in Eileen’s isolation, and the allure of shit and rot—that is, the allure of that which continually threatens ordered life—that the novel is most like Moshfegh’s other work. A bourgeois New Yorker, in her story “A Dark and Winding Road,” says, as he drops the masculinity he’s been guarding, “it was disgusting—just as I’d always hoped it would be.” “This woman could see that I wanted to be ruined,” says the vain young fop of “Dancing in the Moonlight.” And in a story titled “Disgust,” a man cannot “believe what joy he’d brought himself” by performing the precise sexual, and fecally precarious, acts he imagines will repel him most. In McGlue, love and death are united in a kiss smeared in blood; obliteration is rapturous. These are each the sweet submission to life’s entropic forces, which Moshfegh’s characters push back upon only minimally. They tend to release themselves to life’s undertow, whether as an escape or in simply living. They go, in one sense or another, to shit.

When the foretold Rebecca arrives in the novel, a spark is lit in the fetor, and Eileen is propelled forward. The structure of story-by-teller finally draws us closer to the proverbial fireside—it was a “fateful Christmas eve”—furnishing classic-thriller suspense and a wonderfully campy scene of “foreboding” (labeled such by our guide): A woman on the edge smashes the neck of a wine bottle for a hospitable pour, “punctuating the air” with a knife as she speaks; in a still moment, after something quite horrific has been disclosed, “wind [shakes] the house, a spray of snow vibrating the drafty kitchen windows.” In keeping with Moshfegh’s work, the funniest moment in the book is also deadly serious, and the humor, in this case, stems from a wild revelation, timed with to-the-instant perfection.

The book’s final scenes are tender and clear-eyed; events are retold, quite differently from before. And we understand that both versions are true.

In Moshfegh’s short stories, people who describe themselves are often the butt of a joke or simply doomed. It is interesting that in writing a novel—and one that emphasizes its own self-­presentation—Moshfegh has created a character who speaks throughout the book in terms of her own transformation. The elder Eileen is someone who has learned to make a story of her life—and to tell it. This, we have learned from psychology, is one of the skills of “healthy” people. In order to direct oneself, in order to go somewhere, you are said to need to know where and who you have been. Eileen has succeeded in what we often call “bettering”—a fact all the more interesting for knowing that Moshfegh’s short fiction “Bettering Myself” is a story of propulsive self-destruction.

The allure of dissolution is that it demands nothing: It is what will come if you do nothing, and what will come eventually if you don’t. Embracing the rot of life, the continual entropic pull, is intoxicating because of its perpetual, heady reality. Disintegration is always there. Some rot is the rapturous thing itself. Some, Eileen considers, leads to new life. It’s a tale worth trying. And out of a climax of chaos, a night in which the stars were “spangled across the darkness like splattered paint,” Eileen moves on.