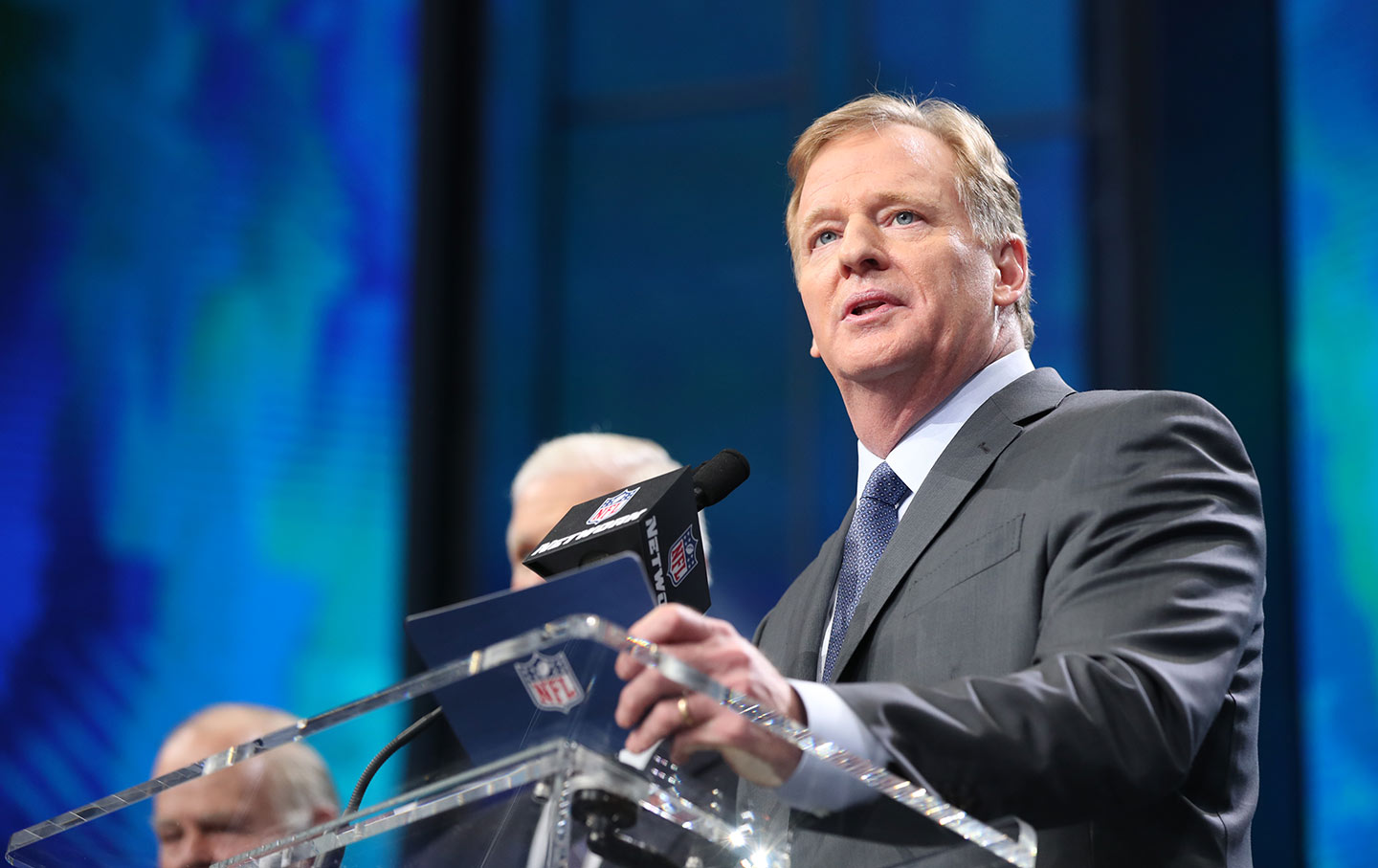 In a move that smacks of cowardice, the NFL is considering a new policy that amounts to “passing the buck” on the most live-wire political issue the league has ever faced: players protesting police violence and racial inequity by taking a knee, sitting on the bench, or raising a fist during the national anthem. Up until now, the league has attempted to handle this issue with a clumsy approach best described as “small carrot and many flailing sticks.” The carrot has involved holding meetings with players and offering them $89 million for social-justice causes if they just—quid pro quo—stop protesting. The flurry of sticks has included threatening the playing time of protesting players, insulting these same players—calling them “inmates,” in the words of Houston Texans owner Bob McNair—cutting or trading offenders from teams, and nakedly colluding against signing the player who started it all, free-agent quarterback Colin Kaepernick.

The proposal that is now being bandied about would allow individual teams to dictate player conduct during the anthem. This is a wretched idea for multiple reasons. First and foremost, it leaves the constitutional and union rights of players up to the individual political windbaggery of NFL owners. These owners range politically from the economically conservative/socially liberal (Jed York of the San Francisco 49ers) to those roughly to the right of Bull Connor (McNair) to a category of Trumpite weirdness all their own (Jerry Jones of the Dallas Cowboys). If one wants to know how this would work out in practice, look no further than the treatment of team cheerleaders. The lack of collective league control over individual owners is current policy and has led to everything from lawsuits to accusations of harassment to the recent report from Washington cheerleaders of feeling “pimped out” to corporate sponsors.

The NFL Players Association delivered a shot across the bow at this very idea of what can be called decentralized protest control, in its recent grievance filed on behalf of free-agent safety Eric Reid. The name Eric Reid is known for more reasons than just his stellar play. As a member of the 49ers, he was the first player to kneel alongside Kaepernick. Since that time, he has written an op-ed for The New York Times in defense of their protests, and traveled to Amsterdam to introduce Kaepernick at an awards ceremony for Amnesty International. He also finds himself, like his friend, a pariah, a person without a team.

When visiting the Cincinnati Bengals, a team that has spent years signing players either in trouble with law enforcement or accused of violence against women, Reid was asked whether he planned on protesting this season—a question they have no right to ask.

The NFLPA, in the “non-injury grievance” that it filed on behalf of Reid, delivered a very important challenge to Goodell’s attempts to meekly punt, forgo accountability, and give absolute power over anthem “conduct” to individual owners.

Here is what they wrote:

Prior to the start of the current NFL off-season, our Union directed the agents of free agent players who had participated in peaceful on-field demonstrations to collect, memorialize and report any relevant information about potential violations of the Collective Bargaining Agreement by teams. These cases were filed based upon the following: There is no League rule that prohibits players from demonstrating during the national anthem.

The NFLPA is making it perfectly clear: The guidance for how to “handle” protests staged during the anthem is the province of the collective-bargaining agreement, not the whims of individual owners. This is an important line in the sand—expect it to be used as a point of reference as the league readies itself for what is likely to be another combustible season.