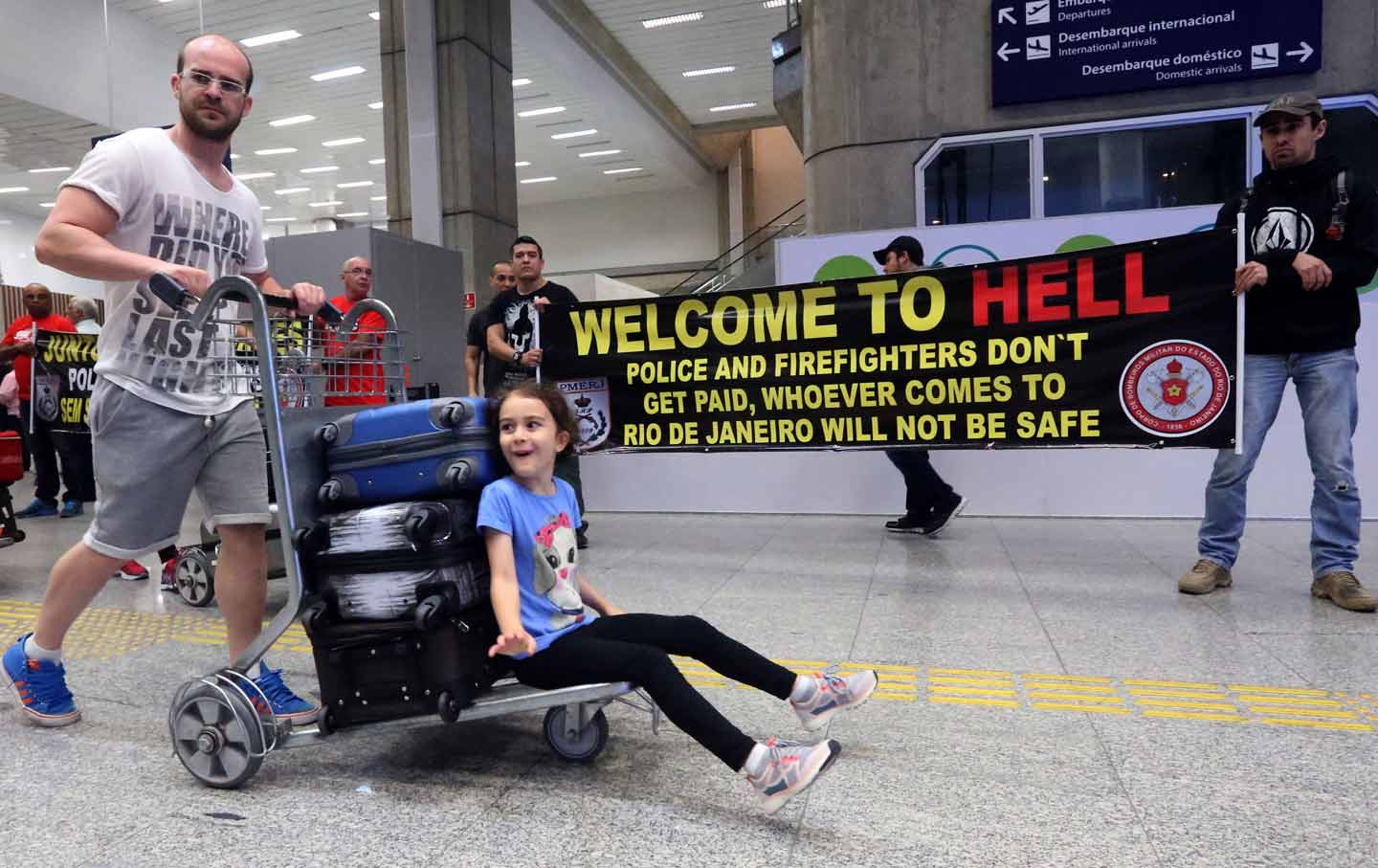 On Monday, outside of the international arrivals section of Rio de Janeiro–Galeão International Airport, was a very curious kind of protest. State police, agitating for a raise and threatening to strike, held a banner that read, “Welcome To Hell: Police and firefighters don’t get paid, whoever comes to Rio de Janeiro will not be safe.” The demonstration received breathless and widespread global coverage, and understandably so with the 2016 Olympics ready to launch in less than a month. In response, the state of Rio issued an executive order freeing up 2.9 billion real ($850 million) to make sure that the police—not the firefighters, just police—would receive overtime and bonuses. Rio’s Olympic Committee also sent hurried assurances that a remarkable 85,000 troops will be in the streets to keep tourists and athletes safe for the duration of the game.

Yet, with all the coverage, a minor factoid was left unexamined: This message, “Welcome To Hell,” was not in Portuguese. It was in English. This was a banner for foreign consumption, and it worked. The police knew what is an open secret in Brazil: If you want to open the purse strings, just make politicians nervous about how they are being seen by people who don’t happen to be Brazilian.

This is how we can have a situation where bailouts for tourist safety were treated like a national emergency while the ongoing “hell” for poor and working-class people in Olympic Rio has only worsened. There is no bailout for those displaced by Olympic construction or the thousands of students in the state of Rio who have occupied their schools in protest of education cuts, as billions are spent on the games. There is no bailout for the health services, cut earlier this year, despite the specter of the Zika Virus, which is far more prevalent in poor communities than anywhere tourists or athletes will tread.

There is also no addressing the conditions in what is a far closer approximation to “hell”: impoverished communities currently in the grips of police violence. This is common for a city hosting the Olympic games: The state makes a muscular show of force in the poorest areas; the message being, “You better stay in line while the tourists are here spending their money.” Yet even by the standards of this history, Rio has seen a staggering rise in homicides at the hands of police. According to Amnesty international, “In the city of Rio alone, at least 307 people were killed by the police last year, accounting for one in every five homicides in the city.” This represents a dramatic uptick for an area that sees police violence in the favelas during the most placid of times. I asked the mayor of Rio, Eduardo Paes, if the Olympics had anything to do with this. He said to me, “That’s not true. This has been a situation for Rio for much longer than when we got the Olympics. This is not new in the city, this is an everyday life problem for Rio. I even wish it was because of the Olympics because [after the games the violence would decrease, but it won’t.]”

An opponent of Paes whom I interviewed, City Councilman Jefferson Moura, also did not blame these killings on the Olympics, instead attributing it to the “immense financial crisis” in the state of Rio. He pointed out that the “project of pacification” in the favelas, a Brazilian term for what we would call “community policing,” had been dramatically defunded because of the economic downturn. Its replacement has been the kind of quick-hit, more cost-effective, and more deadly methods of policing, where you keep the peace by shooting first and asking questions later.

Whether the violence is a product of the economic crisis or the Olympics is largely irrelevant. Far more important is for the world to understand that the “hell” in Rio is being unleashed by the very people who just received a massive raise to keep doing what they have been doing, and that’s kill with impunity. They say “welcome to hell,” and one has to wonder if this a warning or a boast.

Yet the police have also proven something to the people of Rio: If you protest during these games, you have a far greater likelihood of being heard. Earlier this week, 500 people rallied in Rio against the priorities of the Olympics. Expect this to be the first of many. As one protester named Tomas e-mailed me, “The eyes of the world are on Rio. If this produces shame in our government; if this is what gets results, then we can play that game. All we’ve known this year is cuts. Now we also want our bailout.” It is safe to say that the battle for Rio has been joined. This is a contest more dramatic than anything we’ll see on the field of play during these Olympics.