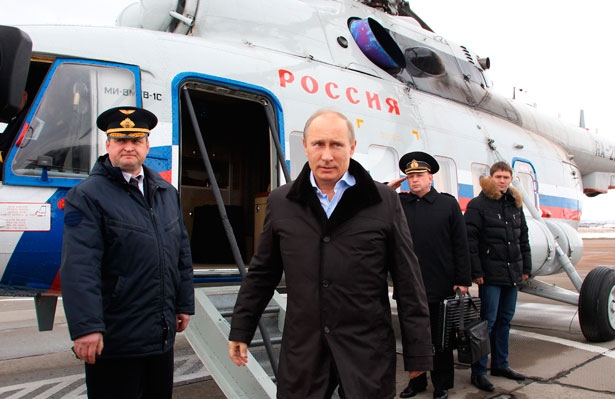 History doesn’t repeat itself, but pundits and politicians sure do. The right-wing reaction to the crisis in Crimea today calls to mind the reaction to the peace conference that took place in Crimea—the resort town of Yalta, to be precise—in 1945 between Franklin Roosevelt, Winston Churchill and Joseph Stalin.

True, the specifics of the situations could hardly be more different. Yalta sought the creation of a stable post–World War II order and featured two global empires that no longer exist. But here is what remains sadly consistent between Crimea in 1945 and Crimea today: diplomatic boundaries are determined by military facts on the ground, not the other way around—but conservatives prefer to ignore this, demanding impossible results and mining global crisis for political gain.

Back in 1945, the right-wing fantasy was that the United States had the ability to ensure the right of self-determination for Eastern Europe, despite the presence of the Red Army in those nations and Moscow’s unflinching determination to control the territory between itself and any potential aggressor. Absent an unthinkable third world war, this was simply impossible. Roosevelt did the best he could within the parameters that existed, but died before he had a chance to educate Americans about the reality they faced (if he ever intended to do so). Seizing on FDR’s ill health at the conference, together with the presence of Alger Hiss, Republicans created an entirely fictional story in which the United States had purposely consigned Eastern Europeans to a life of Soviet slavery and, for good measure, ensured that China would go Communist as well. Thus the myth of the “Yalta sellout” was born. This foolish notion helped fuel the McCarthyist hysteria of the 1950s, with all its subsequent destructive political and cultural fury.

We are threatened with a potentially similar political dynamic in the wake of Vladimir Putin’s aggressive actions of late. As Peter Baker of The New York Times reports, the political posturing is coming fast and furious. “Create a democratic noose around Putin’s Russia,” urged Senator Lindsey Graham, Republican of South Carolina. “Revisit the missile defense shield,” suggested Senator Marco Rubio, Republican of Florida. “Cancel Sochi,” argued Representative Mike Rogers, the Michigan Republican who leads the House Intelligence Committee, referring to the Group of 8 summit meeting to be hosted by Putin. Kick “him out of the G-8” altogether, said Senator Richard Durbin of Illinois, the Democratic whip.

But as Baker reported in an article published a day earlier, titled “Making Russia Pay? It’s Not So Simple,” nothing the United States can do is likely to affect Putin’s calculus in any fundamental fashion. Revisiting events in 2008, when Putin attacked Georgia and sat back and ignored President George W. Bush’s complaints, Baker quoted James F. Jeffrey, Bush’s deputy national security adviser, who explained, “We did a lot but in the end there was not that much that you could do,” adding: “There’s nothing we can do to save Ukraine at this point.” As Fiona Hill, who had been the government’s top intelligence officer on Russia during the Georgia war, put it: “We’ll basically drive ourselves into a frenzy. And he’ll stand back and just watch it. He just knows that none of the rest of us want a war.” Baker also pointed out that the Russians enjoy a veto on the United Nations Security Council and provide “the primary source of natural gas to much of Europe,” and hence are unlikely to inspire meaningful sanctions from anyone in a position to impose them. And he noted that during the Georgia crisis, “Secretary of State Condoleezza Rice bristled at what she called the ‘chest beating’” of those making statements similar to many we are hearing today.

In truth, most Republicans are aware of all of the above but see an opportunity to kowtow to their largely ignorant but angry constituencies—and as a bonus, to put pressure on Obama to use military force in the Middle East. Marco Rubio, who committed an act of political hara-kiri in his own party by proposing a not-completely-insane immigration plan and has been doing penance ever since, has been the most aggressive on this front. Sunday-show champion John McCain has proven close competition, grousing that Obama’s alleged dithering was giving permission to Putin to be “even more ambitious and aggressive in his military intervention.” Still sucking up to AIPAC, McCain also cited Syria and termed Putin’s actions the “result of a feckless foreign policy in which nobody believes in America’s strength anymore.” This line was taken as well by Senator Bob Corker, who insisted: “Ever since the administration threw themselves into the arms of Russia in Syria to keep from carrying out what they said they would carry out, I think [Putin] saw weakness…. These are the consequences.”

Here we see the old Cold War trick of arguing that we must fight a war in one place—say, Vietnam—to show an adversary that we are angry about something else—say, Eastern Europe. It’s a great way to get millions of people killed, but the message received is rarely the one allegedly sent. This time, a US-led war in the Middle East could have far more catastrophic consequences.

As historian Frank Costigliola, who ably edited the just-published excerpts from legendary scholar and diplomat George Kennan’s voluminous diaries, has written: “Diplomacy seeking capitulation rather than compromise was foolish, Mr. Kennan pointed out, because a settlement resented as unfair would be undermined by overt or covert resistance.” It will be a blessing for the United States and the world if Barack Obama heeds this cool-headed advice while others around him itch for a showdown—one that can have only losers, as virtually all superpower adventurism since Yalta has demonstrated.