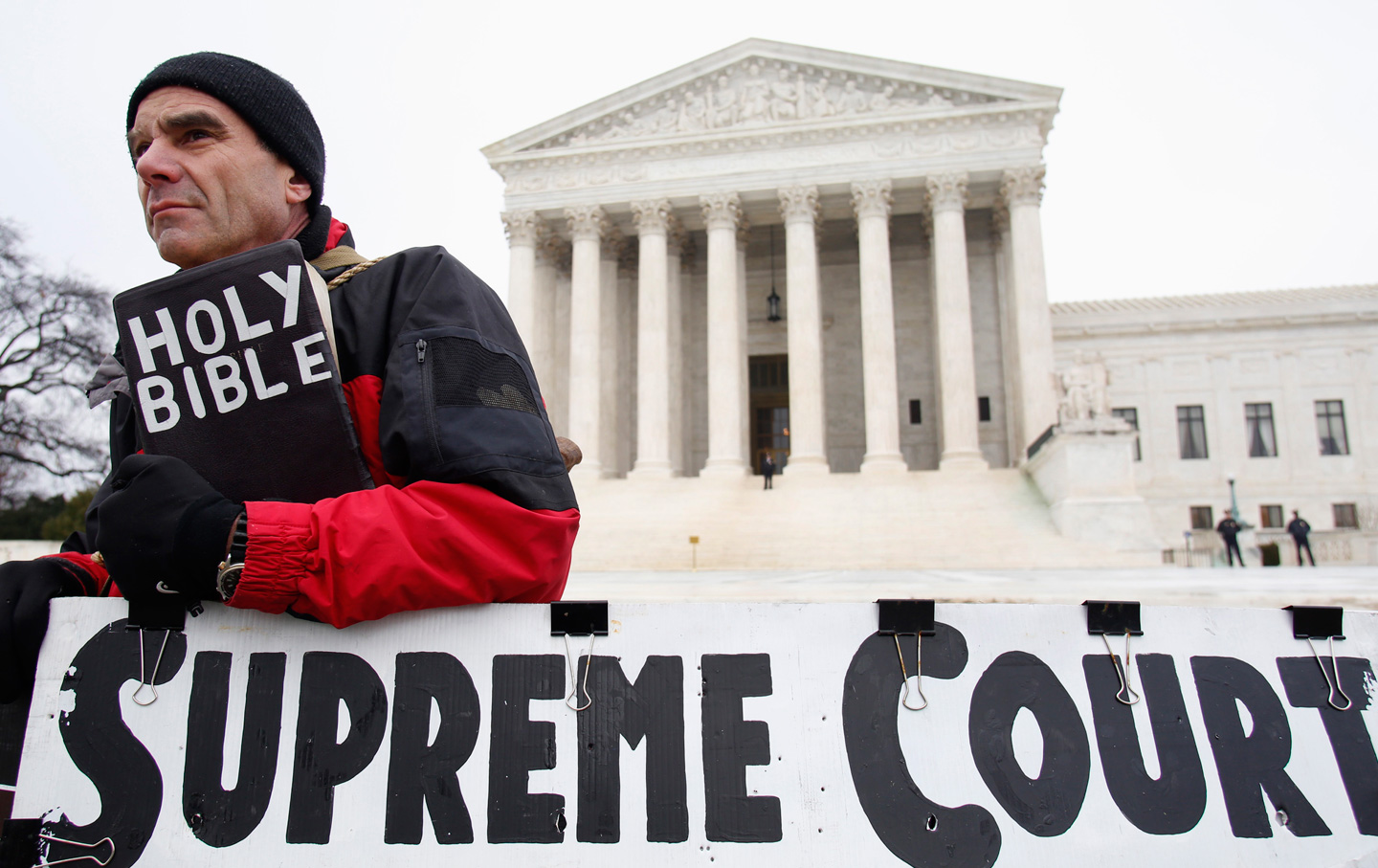 Stephanie Wilkinson, owner of the Red Hen restaurant in Lexington, Virginia, made a fatal mistake when she politely ushered White House Press Secretary Sarah Huckabee Sanders off the premises. Instead of basing her objection on the discomfort of her LGBT staffers, she should simply have said serving Sanders was against her religion. She could have quoted Psalm 101:7: “No one who practices deceit will dwell in my house; no one who speaks falsely will stand in my presence.” Or 1 Corinthians 15:33: “Evil communications corrupt good manners.” If there’s one thing the Bible has plenty of, it’s fulminations against putting up with bad people who are doing bad things. Like lying to the American people about why thousands of children were being ripped from their parents and sent hundreds of miles away with no plan to reunite them.

Freedom of religion is the right’s legal superpower. Right now, if your religion, as interpreted by you, says it’s a sin to bake a cake for a same-sex wedding, and your religion says you should humiliate a woman in front of her 7-year-old rather than fulfill her prescription to end a nonviable pregnancy, and your religion says your employees shouldn’t be able to get birth control through their health insurance because God told you it was really abortion, although science says it is not, the Supreme Court says go right ahead. Your right to act like an uninformed bigot trumps the rights of LGBT people and women and workers and anyone else who gets in the way of your own personal Jesus.

Religion gives you freedom of speech denied to your opponents; the Supreme Court just struck down a California law requiring Christian “crisis pregnancy centers” (CPC) to inform women of their right to an abortion, a legal procedure, even as states force doctors to read their patients scripts falsely claiming that abortion causes breast cancer, depression, and endless regret. State legislatures cannot force a CPC volunteer from the Church of the Holy Embryo to go against her conscience, but they can definitely compel an actual doctor who has performed hundreds of procedures to go against hers.

Claiming that religion gives you the right to harm your fellow Americans probably works best if you are Christian. Only Christians get to impose their religion on others. A Hindu wouldn’t get very far with a lawsuit to shut down the beef industry. As for Islam, Muslims should be grateful to be allowed to live here or even to visit, although according to the Supreme Court’s recent decision, the Muslim ban isn’t really a ban on Muslims (see Venezuela and North Korea), even if President Trump said over and over that that’s exactly what it was. A single reference to Hitler from one civil-rights commissioner in the Masterpiece Cakeshop case was cause for the Supremes to overturn lower-court rulings against the Christian baker, but Trump’s obsessive tweets against Muslims were irrelevant, because he and his administration said other things too. 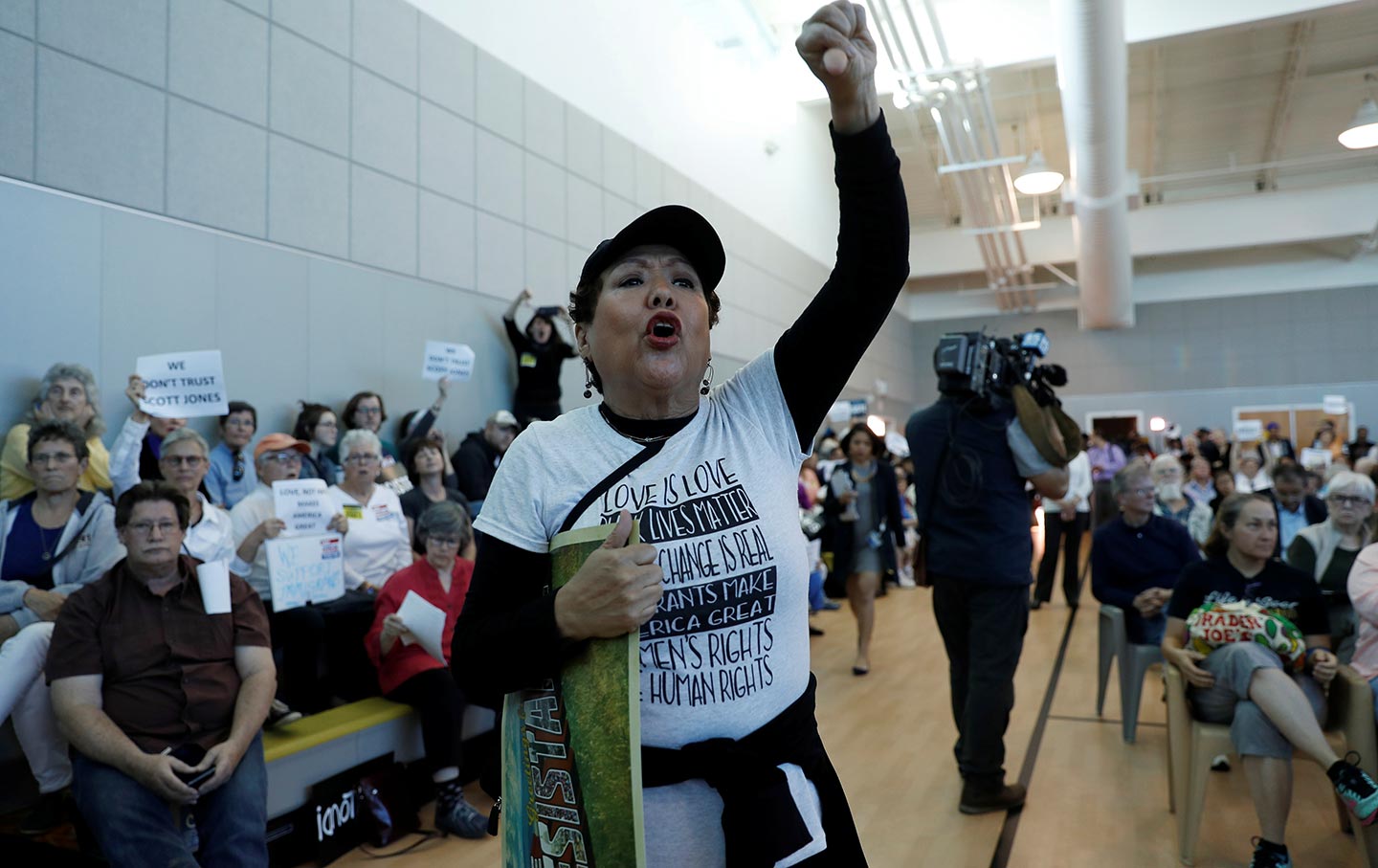 The resignation of Justice Anthony Kennedy ties together the firestorm over “incivility” like Ms. Wilkinson’s and the increasingly reactionary and hyper-politicized Court. We would not be where we are today had not Mitch McConnell violated every civil norm, to say nothing of hundreds of years of historical precedent, and refused to allow President Obama a vote—or even a hearing—on his choice for the Court vacancy created by the death of Antonin Scalia. The pretext for this outrageous power grab was sheer effrontery: Since when does a sitting president not get to nominate a justice? But it worked. Democrats fumed, but assumed Hillary Clinton would win the election, and it would all come right in the end. Republicans stole the seat and put Neil Gorsuch in it. But at least everyone got to eat their dinner in peace.

And really, what could be more important than that? Just ask the Washington Post editorial board, which recently argued that no “special moment” justifies incivility. The politicization of daily life goes both ways, after all: “How hard is it to imagine, for example, people who strongly believe that abortion is murder deciding that judges or other officials who protect abortion rights should not be able to live peaceably with their families?”

That argument would be a lot more persuasive were it not the case that Trump supporters, egged on by the president, have already breached every social norm in the book. Right-wing troll Milo Yiannopoulos texted reporters, “I can’t wait for the vigilante squads to start gunning journalists down on sight.” Two days after his provocation went public, someone did just that at Maryland’s Capital Gazette, killing five. Now Milo says he was just kidding. A woman recently called a Mexican American doing yard work across the street a rapist who should go back to Mexico (he was actually born here and works as a computer-systems administrator). Trumpists have harassed restaurants all over the country which happened to be called the Red Hen. For years, anti-abortion zealots have done their best to make normal life hell for red-state abortion providers and their patients: picketing their homes, sending—and sometimes fulfilling—death threats, socially ostracizing them, leafleting their neighbors, following their children about, jotting down the license-plate numbers of patients’ cars. Why do you think some clinics have to fly doctors in from out of state? When it comes to so-called pro-lifers, civility left the building a long time ago.

I understand completely why Ms. Wilkinson made Sarah Huckabee Sanders leave. She could not have known how the incident would be blown up by the paranoid right, ever looking for proof that they are victims of political correctness, and be seized upon by media obsessed with a “both sides do it” narrative. If you think all that matters is the midterms, it was probably not a wise thing to do, but who except for obsessive politicos thinks like that? Do the Trumpies worry that their Build That Wall chant might hurt the feelings of Mexican-American computer experts and lose the GOP some votes? No matter how vulgar, gross, threatening, cruel, illegal, and insane the right becomes, it’s always the left that is warned against piping up too loudly and in the wrong way. It’s like the old Jewish joke: Three Jews stand before a firing squad. Each is offered a blindfold. The first Jew takes a blindfold. The second Jew takes a blindfold. The third Jew refuses the blindfold. The second Jew elbows him and says, “Moshe, take a blindfold—don’t make trouble.”

Sshh, be polite, don’t encourage them. When they go low, we go high! May I start you off with a cocktail, sir and madam? The waiter will be round to take your order in a minute.