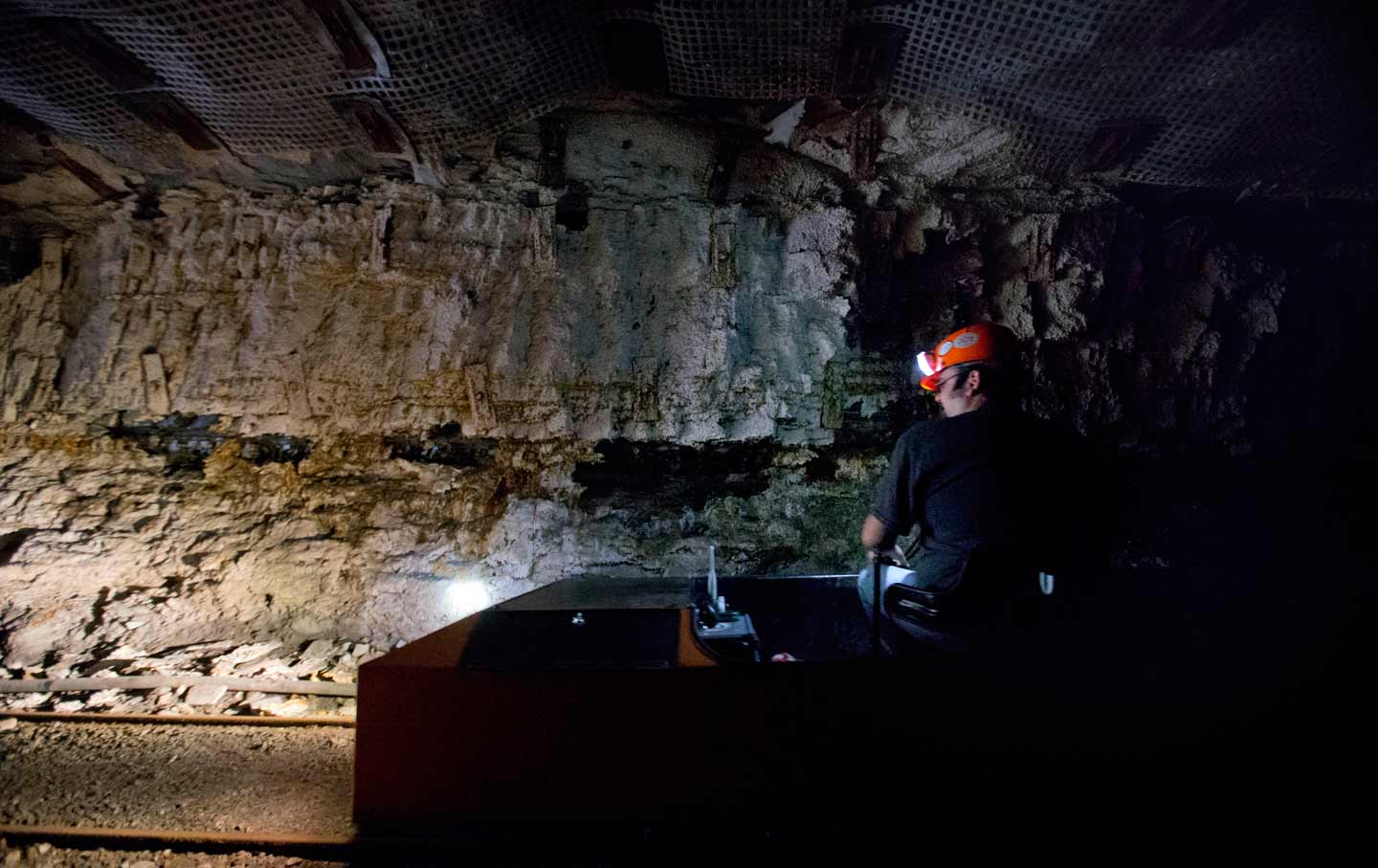 A worker drives a rail car while conducting a tour of the Portal 31 coal mine that has been turned into a tourist attraction in Lynch, Kentucky. (AP Photo / David Goldman)

When Peabody Energy announced it was entering bankruptcy, environmentalists let out a collective cheer, hailing—perhaps prematurely—the death of coal power.

But while greens hailed King Coal’s downfall, the heart of coal’s empire shuddered: From North Yorkshire to Appalachia, where mineworkers fought and died for decent livelihoods in the mines, a way of life that sustained generations is evaporating. Paradoxically, these mining towns are also on the front line of the worst immediate impacts of coal pollution, but that doesn’t make the disruption any less painful.

Yet Appalachia’s funereal air does carry some notes of hope: In response to Peabody’s bankruptcy announcement, Carl Shoupe of Harlan County, former miner turned climate activist with the environmental group Kentuckians for the Commonwealth (KFTC), proclaimed that the crisis “proves that the time to build a new economy that is good for all people—not just a wealthy few—is now,” and called for measures to transition the local economy away from coal while at the same time “keeping our promises to the coal miners who powered this country.”

Progressive labor advocates actually see Peabody’s turmoil as a potential turning point that could help fuse the seemingly divergent agendas of environmentalism and labor. For years, Labor Network for Sustainability (LN4S) has been pushing for a socially democratic energy system anchored by the principles of “just transition” toward “decent, dignified jobs” that support a healthier planet.

The first step toward post-coal transition, LN4S argues, is to “define a common vision” that puts workers at the center of energy transformation—not unlike the way labor has historically done, via its more radical formations, in the fields of civil rights, healthcare policy, and, lately, unjust international trade agreements.

Earlier this year the group convened a Labor Convergence on Climate Change, a grassroots analog to the Paris summit. The assembly of labor and community activists engaged in the kind of critical dialogue that is sorely missing from the short-term agendas of many unions. They hammered out a five-year plan for a “robust job and transition program” based on renewables and promoting “viable examples of worker ownership models that prioritize sustainability, both environmentally and economically.” Another priority is launching comprehensive reclamation programs and a Superfund-like remediation fund to help heal the damage mining pollution has inflicted on the regional habitat for decades.

According to LN4S co-coordinator (and Nation contributor) Jeremy Brecher, as Peabody seeks a bailout for its financial failure, the federal government should “intervene in the legal process and the political process” to protect workers’ interests while ensuring that corporate assets “be used to address the needs of the public and workers in the industry and communities that have been exploited by Peabody.”

Going forward, the long-term economic math works out clearly in favor of a just transition. According to one study: “A dollar invested in energy efficiency and alternative energy creates more than twice as many jobs as the same amount invested in coal or gas.” In terms of jobs per dollar, biomass, wind, and solar each produce more than twice as many labor opportunities as natural gas (the so-called “bridge fuel” that’s now busting after a short boom).

But even if they can find an economically fair way to transition, the political dynamics remain volatile: While Appalachia’s impoverished rural towns are economically devastated, they have also welled with racial resentment and economic anxiety, which steel the resistance to climate change–driven interventions in their regional economy.

But if unions hope to build on the labor left’s tradition of proactively engaging social-justice issues, progressive labor groups may be the one grassroots force in coal country that can confront the challenges of civil rights, economic justice, and climate crisis, under a broader agenda of climate justice.

KFTC has pioneered this approach in mining towns, with community outreach both to acclimatize and educate communities about a climate transition that is ultimately happening with or without mining families on board. Several years ago, KFTC campaigned to pressure the East Kentucky Power Cooperative (EKPC), an electric co-op serving 87 local counties, to halt plans for a new power plant and instead invest in a long-term collaborative planning process to promote renewables. The collaboration has yielded plans for a localized solar farm, bolstered with transition credit for ratepayers.

Meanwhile, KFTC campaigns for cooperative governance reforms to promote more democratic decision-making, allowing more public input into coop boards’ process so that environmental voices can air climate-justice concerns. Those reforms may come in handy as the community runs up against local business and political pushback against the new federal coal power regulations now headed for a Supreme Court challenge.

KFTC activists, including a number of former mine workers, support national initiatives coupling immediate economic relief with a longer-term power shift: The proposed federal RECLAIM Act, for example, would direct $1 billion in federal funds toward localized projects to aid development “through the reclamation and restoration of land and water resources adversely affected by coal mining.”

While the current focus is on Peabody’s collapse, the imperative set forth by the Paris summit—which was relatively silent on labor rights—stretches beyond any single bankruptcy. LN4S co-coordinator Joe Uehelin notes that emergency relief for front-line workers impacted by coal’s decline represents “really important triage and Band-Aids. But there’s a much bigger climate[-driven], forced energy transition underway that’s going to affect a lot of working people” involved in fossil fuels–based production, from mine to assembly line.

From mine workers’ healthcare to energy jobs for the next generation, Peabody’s crisis may be a harbinger of worse to come, but it reveals how working-class Appalachia’s struggles collapse the divide between social and environmental values: That intersection is what the labor and environmental movements have been talking about all along—sometimes talking past each other, but inevitably converging.