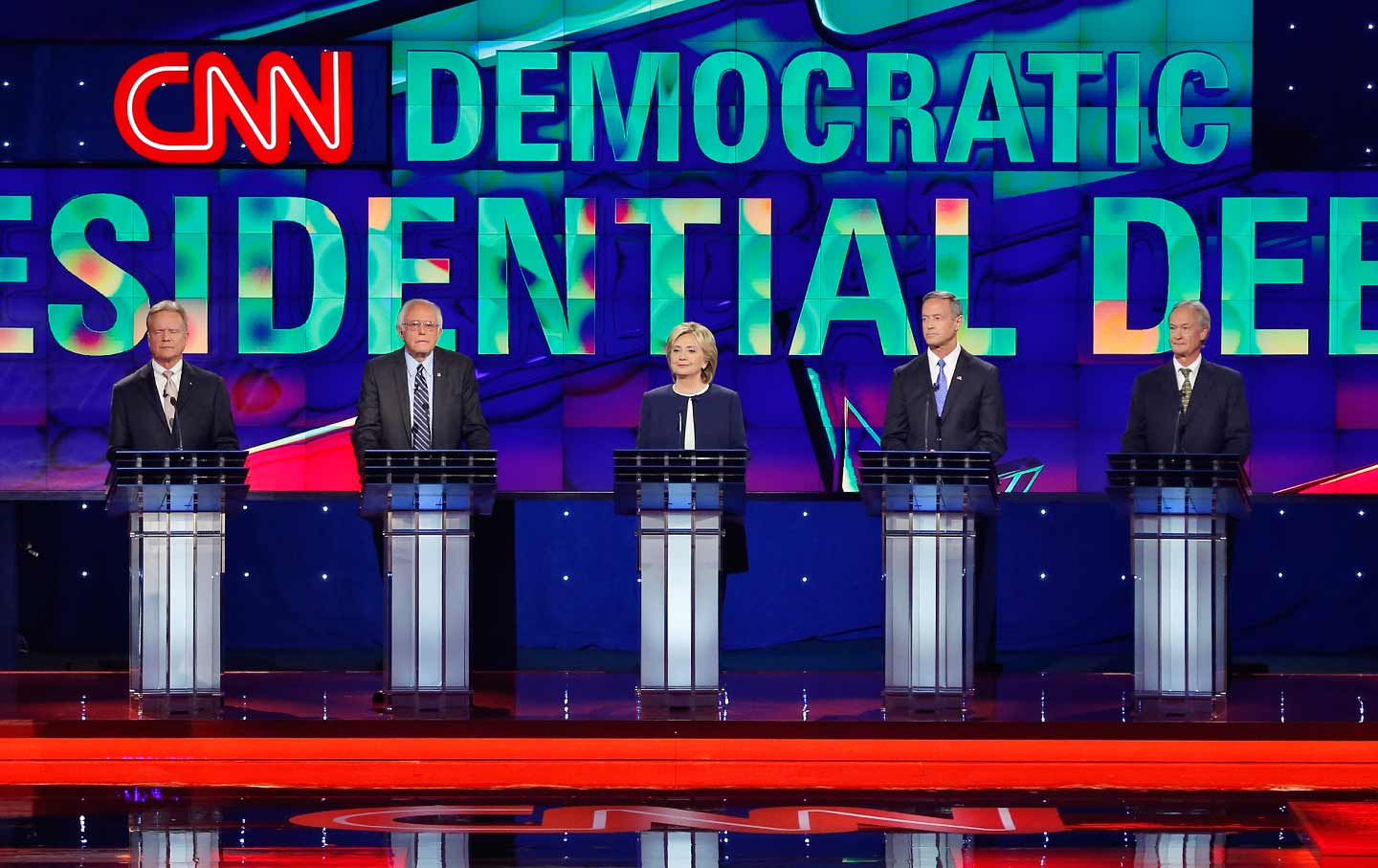 On Tuesday night, there was a single mention of the word “Israel” during the Democratic debate. It was uttered by the most conservative candidate on the stage, Jim Webb, while arguing that the Iran nuclear deal is a “strategic failing” that upset the balance of power between “our greatest ally Israel” and other Middle East powers, and ultimately opened the door for Russian intervention in Syria.

Contrast that with 23 references to Israel during the two “primetime” Republican debates. Carly Fiorina pledged that if she were elected, her first call, “on day one in the Oval Office,” would be “to my good friend Bibi Netanyahu to reassure him we will stand with the state of Israel.” Jeb Bush promised that his administration would “make sure that [Israel has] the most sophisticated weapons.” And, echoing a promise that’s been in the Republican platform since 1995, Ted Cruz said that his election would assure that “the American embassy in Israel will be in Jerusalem.”

One shouldn’t read too much into this. Democrats still go out of their way to assure the world that they “stand with” the Jewish state. And despite his administration’s well-documented tensions with Israeli Prime Minister Benjamin Netanyahu, Barack Obama assured skeptics of the Iran nuclear deal that he’s “pursued an unprecedented level of military, intelligence and security cooperation with Israel.” The numbers back that up. The administration has given $20.5 billion in foreign military assistance to Israel since 2009. And next week, General Joseph Dunford, chairman of the Joint Chiefs of Staff, will travel to Tel Aviv in an attempt to persuade Netanyahu, who cut off talks in protest of the Iran deal, to accept a big increase in military aid over the next ten years.

But the parties’ disparate focus on Israel is consistent with the increasingly partisan nature of “pro-Israel” politics in the United States, something that’s become a near-obsession of the Israeli and Jewish press. A Bloomberg poll conducted in April found that “Republicans by a ratio of more than 2-to-1 say the U.S. should support Israel even when its stances diverge with American interests,” while Democrats, “by roughly the same ratio, say the opposite is true and that the U.S. must pursue its own interests over Israel’s.”

The context here is rising polarization in both the United States and Israel. Israeli politics have shifted far to the right over the past 20 or so years, culminating in Netanyahu’s reelection in March following a campaign in which he abandoned the two-state solution—the foundation of decades of US Middle East policy—and promised to build more settlements.

During the 2012 presidential campaign, Netanyahu, who was a colleague of a young Mitt Romney at the Boston Consulting Group in the 1970s, all but endorsed the Republican candidate. Romney then paid a visit to Israel during the campaign, where he gave a hawkish foreign policy speech that The American Prospect’s Gershom Gorenberg described as following “a Bibi-esque outline so closely it seemed written in the prime minister’s office and delivered to his surrogate.”

But it was Netanyahu’s March address to Congress, where he bashed Obama’s nuclear deal with Iran at the invitation of Speaker John Boehner, that was widely perceived as crossing the line into overt meddling in American politics. Even Fox News anchor Shepard Smith blasted the speech, saying, “It just seems like they think we don’t pay any attention and we’re just a bunch of complete morons, the United States citizens, like we wouldn’t pick up on what’s happening here.”

The media tend to look at Israel through the prism of Jewish politics. The New York Times, for example, came under fire for publishing a graphic that identified lawmakers’ position on the Iran deal while noting whether or not they were Jewish. And American Jews tend to skew Democratic. But today white Evangelical Christians—who accounted for about half of Republican primary votes in the 2012 cycle—are more supportive of Israel than Jews. Meanwhile, according to Pew, only three in 10 Jews say they feel a “close attachment” to Israel. More than twice as many evangelicals believe that “God gave the land of Israel to the Jewish people” than do the Jewish people themselves.

A majority of Americans on both sides of the aisle continue to express support for Israel, but in recent years the intensity of that support has become unbalanced. Whereas support for Israel was once entirely bipartisan—and that bipartisanship was a major source of power for pro-Israel advocates—it’s now become a political touchstone, a litmus test issue, for conservatives.

The widespread perception that pro-Israel advocates were partnering with the Republican Party to undermine the president was a major reason for the Israel Lobby’s failure to derail the Iran deal, despite spending tens of millions of dollars in the effort. Even Democrats with reliably pro-Israel track-records, like Representative Debbie Wasserman Schultz (D-FL), didn’t want to be seen as betraying her party. And many observers credited that loss, on what was seen as a top-tier issue, with weakening the American Israel Public Affairs Committee’s clout on Capitol Hill.

If the trend continues, and expressing undying fidelity to Israel comes to be something that only Republicans do, like arguing that tax cuts pay for themselves, it could have a major long-term impact on US policy in the Middle East. Obama has already dangled the possibility of recognizing a Palestinian state, and some observers warn that the administration might be more reluctant to protect its ally at the UN in the future. It’s certainly something to keep an eye on.