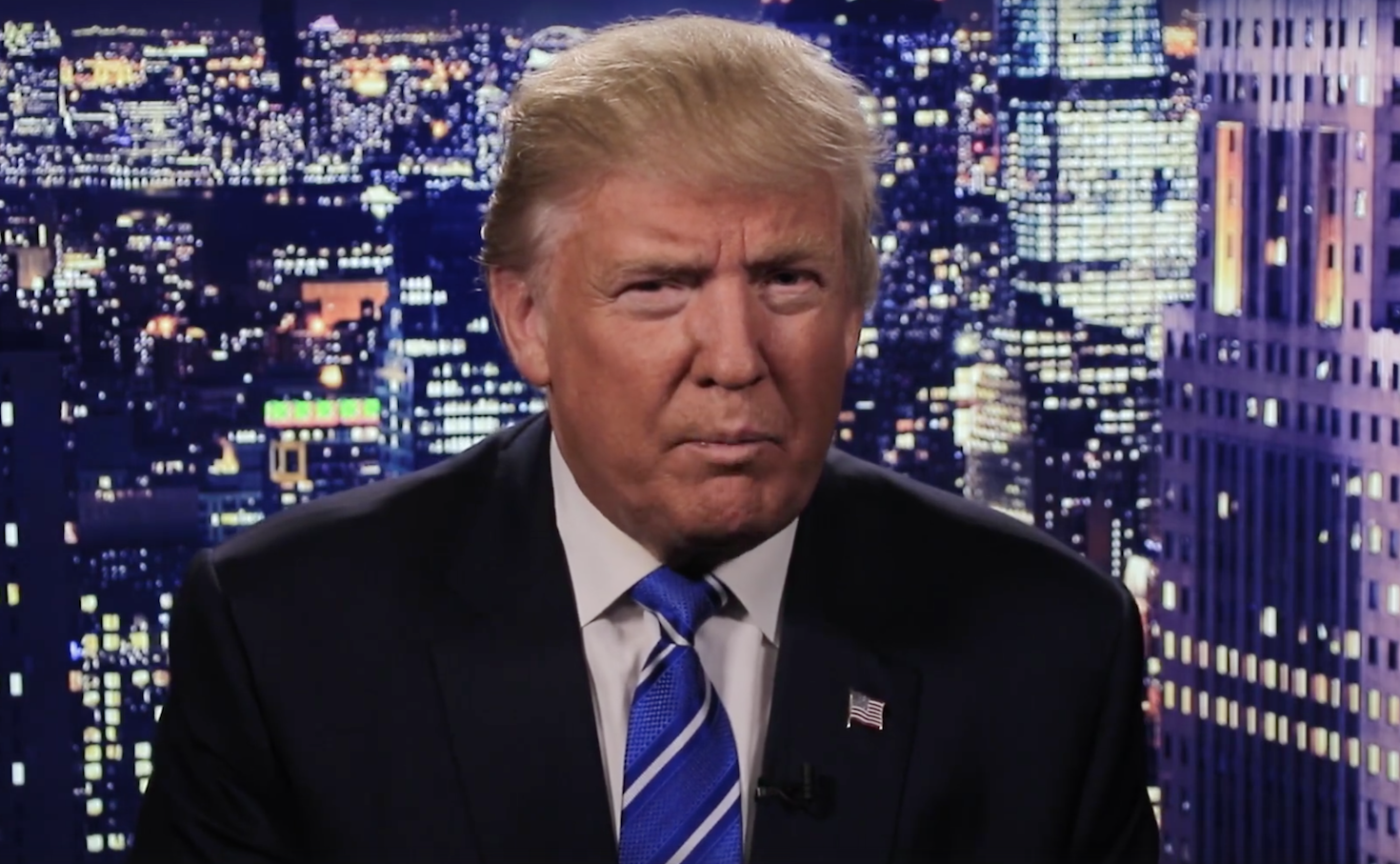 Donald Trump in a video statement responding to a 2005 video in which he brags about assaulting women on October 7, 2016

On one level, Donald Trump’s disgusting comments about being free to sexually assault women because he’s a wealthy celebrity are not surprising. Trump is a sexist pig, whose depravity has a bottomless bottom. No one who’s been paying attention to the presidential race, or to Trump’s past behavior toward women, can be shocked by his appalling words. The man who complained about undocumented Mexican “rapists” boasts of being a rapist himself in a sickening Access Hollywood video released Friday afternoon.

On another level, though, listening to Trump riff about trying to “fuck” a married woman and being able to “grab [a woman] by her pussy” because he’s a “star”—especially listening to the uncensored version, with the “tits” and the “bitch” and the “fuck” and the “pussy”—is sickening. Clearly this is a man who talks like this about women, at least in private with other men, all the time. He’s repellent. In case you missed it, here’s Trump in his own words.

“I did try and fuck her,” the GOP presidential nominee confessed to Access Hollywood’s slavish Billy Bush, about a woman who turned out to a producer on the same show. “I moved on her like a bitch, but I couldn’t get there,” He implied that rejection was rare (but we shouldn’t believe him). He tells Bush he can’t help assaulting “beautiful” women: “I just start kissing them. It’s like a magnet. Just kiss. I don’t even wait. When you’re a star, they let you do it. You can do anything. Grab them by the pussy. You can do anything.”

I have to interject here that Trump’s boast that celebrities who want women can “grab them by the pussy” reminded me of Steve Carell’s character in The 40-Year-Old Virgin insisting that women’s breasts (which he’d never actually touched) felt like “bags of sand.” Certainly douchebags try, uninvited, to touch women “there,” but to “grab them by the pussy,” which sounds like grabbing a bowling ball, suggests a lack of familiarity with the way women’s bodies work. I’m sure, from various accounts of his conquests, that Trump has plenty of experience with women, but experience doesn’t necessarily translate to knowledge. He sounds like a predatory lout, and also a pathetic loser. I’m pretty sure that he’s both.

Will it matter? We already know Trump is a sexist monster, or we should know. Yet the dimensions of monstrosity, the specifics of abuse, all captured on this tape, are, as always, hard to listen to, unless you’re a monster yourself.

GOP leaders who have reluctantly backed Trump over the last few months—are they monsters? I know for sure they’re cowards. House Speaker Paul Ryan huddled with his advisers for five hours, and then disinvited Trump to the first public event, in swing-state Wisconsin, at which they were expected to appear together. I felt a little stirring of respect for Ryan, and hope for our country’s future, when I heard that.

Then I read Ryan’s statement. Here it is. Meet me on the other side.

I am sickened by what I heard today. Women are to be championed and revered, not objectified. I hope Mr. Trump treats the situation with the seriousness it deserves and works to demonstrate to the country that he has greater respect for women than this clip suggests. In the meantime, he is no longer attending tomorrow’s event in Wisconsin.

OK, that’s interesting, especially the last line. It took a little fortitude, I guess. The notion that women should be “championed and revered” sounds patriarchal to me, but if Ryan was leading up to dumping Trump, rescinding his endorsement, I’d probably tolerate him getting there any way he could.

But that’s not what he did. His spokespeople confirmed that he’s still supporting Trump; he just asked that Trump not show up at the Wisconsin event tomorrow. It’s pretty clear that if Trump does something that suggests he “treats the situation with the seriousness it deserves” and shows “he has greater respect for women than this clip suggests,” Ryan will continue supporting him.

Senator John McCain seemed to make a similar bargain. “There are no excuses for Donald Trump’s offensive and demeaning comments,” he said in a statement. “No woman should ever be victimized by this kind of inappropriate behavior.” So far, so good. But then McCain went too far: “He alone bears the burden of his conduct and alone should suffer the consequences.”

I don’t think so, Senator McCain. I think any Republican who continues to back Trump ought to share “the burden of his conduct” and “suffer the consequences” along with the revolting GOP nominee. I certainly hope that happens to you, in your Senate race with Arizona Democrat Ann Kirkpatrick.

So far, the only Republicans to un-endorse Trump are from Utah: Congressman Jason Chaffetz and Lieutenant Governor Gary Herbert both withdrew their backing from the GOP nominee, citing the newly revealed remarks. Trump has been struggling in Utah, though he’s still expected to win there. That means Chaffetz and Herbert have little to lose, and maybe something to gain, by jumping ship on the frightful GOP nominee.

Elsewhere in the party, so far, there is noise but no courage. Leaders who’ve resisted Trump proclaim their wisdom; leaders who reluctantly endorse him go big with the criticism and small with the spineless decision to continue to back him. One exception is former New Jersey governor Christine Todd Whitman, who’d earlier said she wouldn’t vote for Trump; on Saturday morning she officially endorsed Clinton. It’s possible that public opinion will shake more of them loose.

Late Friday night, Trump sort of apologized in a video shared online. His face is frozen in anger, and when you hit “play,” he expresses contrition for his words in a voice absolutely devoid of contrition. He starts off at least trying to feign regret. But within a few sentences, he’s back to being himself: “Bill Clinton has actually abused women and Hillary has bullied, attacked, shamed and intimidated his victims. We will discuss this more in the coming days. See you at the debate on Sunday.”

What a time to be alive! A man who made women shudder by reducing a right-wing media superstar, Megyn Kelly, to her menstrual cycle, now announces he can sexually assault us at will. These last 16 months have been one long dance with PTSD if you’re female. I don’t know a single woman who hasn’t been groped, some more aggressively (and violently) than others. Trump has distilled the routine humiliations of being female so clearly, it sometimes hurts to breathe. Is this what it takes to get a woman president?

It may be. I feel more strongly than ever that Clinton will beat this amoral loser. I also feel more strongly that if she doesn’t, women will look at themselves, and society, in darker ways. What we have to endure, to live in this world, is being thrown back in our faces, and shown to the men of our world. I believe it will result in a collective shudder and a rejection of Trump. If it doesn’t, we’re in an even sadder place as a country than I thought.

UPDATE, 4:30pm: Since this piece went live, many more Republicans have withdrawn their endorsements of Trump. FiveThirtyEight.com has a list: Six U.S. senators have rescinded their support: Shelley Moore Capito of West Virginia, Deb Fischer of Nebraska, Kelly Ayotte of New Hampshire, Mike Crapo of Idaho, John Thune of South Dakota and Dan Sullivan of Alaska. So have Alabama Reps. Martha Roby and Bradley Byrne, Nevada Reps. Joe Heck and Cresent Hardy, as well as Rep. Ann Wagner of Missouri, Rep. Rodney Davis of Illinois and Rep. Scott Garrett of New Jersey. Sen. Lisa Murkowski of Alaska and Rep. Mia Love of Utah, who had remained uncommitted until now, also announced that they would not vote Trump. South Dakota Gov. Dennis Daugaard also called on Trump to leave the race.