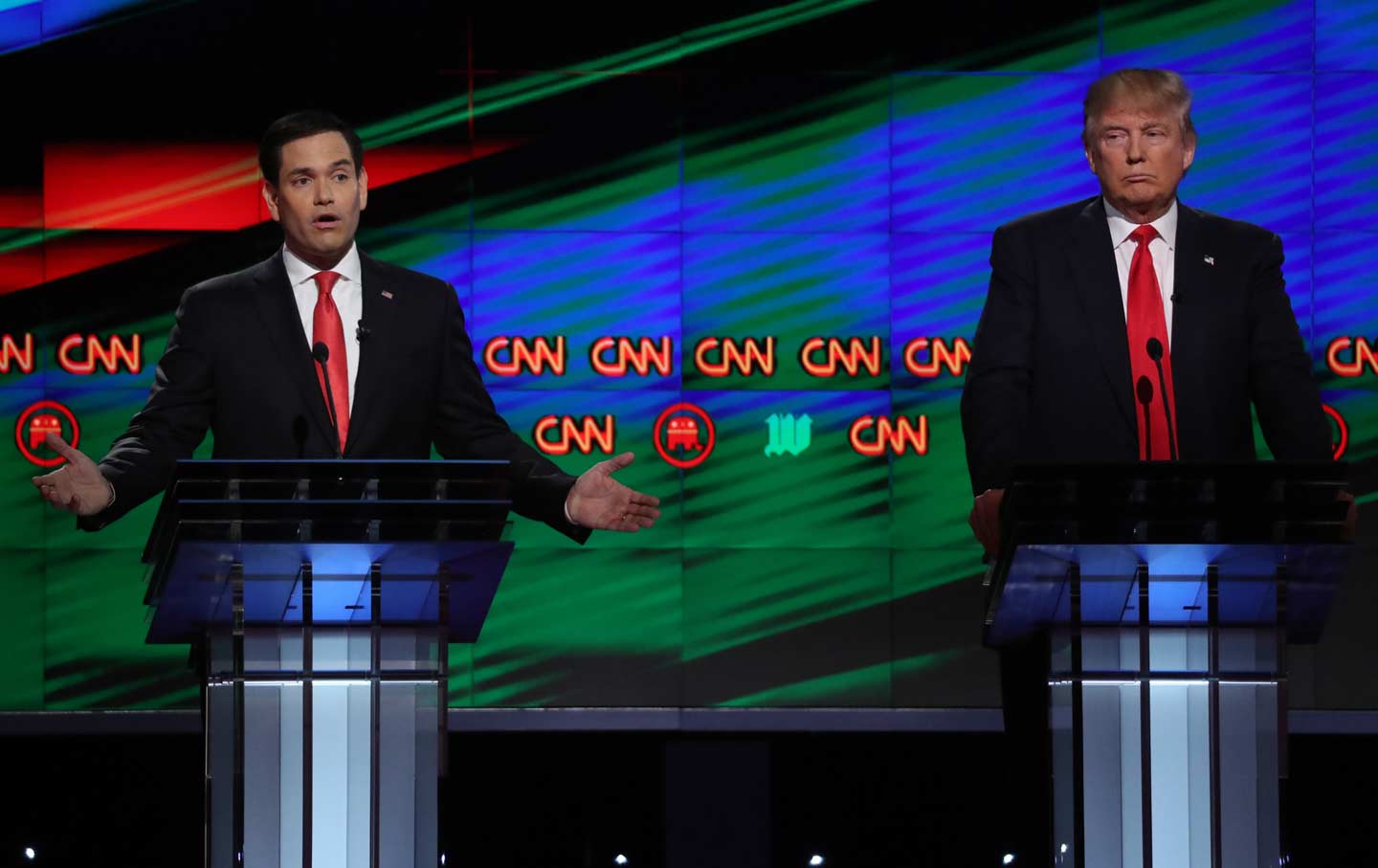 Late in Thursday’s Republican presidential debate, CNN’s Jake Tapper asked Donald Trump about the disturbing trend of mob violence at his campaign events, which reached a crescendo this week when a North Carolina man was arrested for assaulting an attendee who was being led out by police. This followed the alleged assault on Tuesday of a reporter by Trump’s campaign manager, Corey Lewandowski, though Tapper did not ask about that.

With only a very mild denunciation about the North Carolina event, Trump essentially validated the assailants:

Tapper pressed the point, noting that in many cases Trump explicitly encouraged violence against protesters at his rallies. (The man who was punched, Rakeem Jones, was part of a group being ejected when one member started yelling.) Tapper pointed out that during past campaign events, when protests erupted, Trump said things like “I’d like to punch him in the face,” (on February 23) “in the good ol’ days, they’d have ripped him out of that seat so fast,” (February 27) and (from February 1) “knock the crap out of him, would, you? Seriously, OK, just knock the hell. I promise you I will pay for the legal fees, I promise, I promise.”

Trump was cornered—he has clearly been inciting direct violence. (The Trump campaign did not clarify to MSNBC’s Chris Hayes if they would actually pay the North Carolina assailant’s legal fees.)

The GOP front-runner simply shrugged off the question and gave a remarkable answer where he vilified the protesters, not their violent assailants, and also praised law enforcement.

We have some protesters who are bad dudes, they have done bad things. They are swinging, they are really dangerous, and they get in there and they start hitting people. And we had a couple big, strong, powerful guys doing damage to people, not only the loudness, the loudness I don’t mind. But doing serious damage. And if they’ve got to be taken out, to be honest, I mean, we have to run something. And it’s not me. It’s usually the municipal government, the police because I don’t have guards all over these stadiums. I mean, we fill up stadiums. It’s usually the police—and, by the way, speaking of the police, we should pay our respects to the police because they are taking tremendous abuse in this country and they do a phenomenal job.

This naked authoritarianism is perhaps not surprising for a candidate whose campaign is centered on a pledge to eject 11 million undocumented immigrants from the country and building a wall on the entire southern border. He also comically referred to the Tiananmen Square protests as a “riot” earlier in the debate.

But what happened next was truly surprising: None of Trump’s rivals, who are desperate for any way to get an edge on Trump before it’s too late, went after him. Instead, they validated his answers.

When Tapper asked Ted Cruz if what was happening at Trump’s rallies might hurt Republicans in a general election, Cruz responded: “Washington isn’t listening to the people. And that’s the frustration that is boiling over. And we need to nominate and elect a president who remembers, he works for the people.”

John Kasich disclaimed, “I worry about the violence at a rally, period,” but went on to say, “Jake, here’s what I think is happening. There are people out there who are worried about their jobs.”

We may not see Rubio and Kasich on a debate stage after Thursday night, and this particular episode is a fitting coda for the establishment’s preferred candidates. The GOP can’t stop Trump because, contrary to any protestations, he isn’t hijacking the party. He’s just giving voice to its worst elements.

Maybe it would be impossible to neutralize Trump’s appeals to the lowest common denominator, and maybe not—perhaps law-and-order tendencies are too deeply baked into the Republican Party’s DNA. After Fox News has spent months demonizing Black Lives Matter as a hate group, maybe it’s impossible to then elicit sympathy for the largely black protesters being ejected and assaulted at Trump’s rallies.

It’s an open question. But none of Trump’s rivals want to know the answer.