Ta-Nehisi Coates and Danny Glover testify about reparation for the descendants of slaves during a hearing before the House Judiciary Subcommittee on the Constitution, Civil Rights, and Civil Liberties, June 2019. (Photo by Pablo Martinez Monsivais / AP)

When I saw a little black boy standing outside the Rayburn House Office Building holding a placard that read “Cut the Check—MLK,” I knew it was going to be an extraordinary day in Washington, DC. This Juneteenth, Congress held its first hearing on the resolution to study reparations, and its halls stood in rare form. What began as an entrance line at 7 am had morphed into a knot of reporters, staffers, and anxious attendees by 10. The hearing overflowed in minutes. Congressional members pressed through the throng of bodies. TV cameras clamored at the doors. The Capitol police struggled to cajole the crowd.

Banging his gavel early on in the proceedings, Chairman Steve Cohen (D-TN) worked to temper the audience’s vigor. “We’re not supposed to, in the audience, respond, or speak out, or applaud, or cheer,” Cohen implored. Just the day before, Senate majority leader Mitch McConnell had declared the reparations issue dead. His autopsy cited the Civil War, civil-rights bills, and a black president. “I don’t think reparations for something that happened 150 years ago for whom none of us currently living are responsible is a good idea,” he said. On Wednesday, however, the case for reparations and its plaintiffs was alive.

HR 40 doesn’t aim to quantify merely the toll of chattel slavery, but also the era of “Neo-Slavery.” This period, which former Wall Street Journal reporter Douglas Blackmon covers in his Pulitzer Prize–winning book Slavery by Another Name, stretched deep into the 20th century. It includes the crimes of sharecropping, convict leasing, and Jim Crow. Its victims are still among us. This bill, which has been introduced at every session for the last 30 years, specifically mandates the study of the “subsequent de jure and de facto racial and economic discrimination against African-Americans,” including “redlining, educational funding discrepancies, and predatory financial practices.”

“For a century after the Civil War, black people were subjected to a relentless campaign of terror—a campaign that extended well into the lifetime of majority leader McConnell,” author Ta-Nehisi Coates reasoned during his opening testimony: “It is tempting to divorce this modern campaign of terror, of plunder, from enslavement, but the logic of enslavement, of white supremacy, respects no such borders and the god of bondage was lustful and begat many heirs. Coups d’ état and convict leasing. Vagrancy laws and debt peonage. Red-lining and racist GI bills. Poll taxes and state-sponsored terrorism. We grant that Mr. McConnell was not alive for Appomattox. But he was alive for the electrocution of George Stinney.”

One floor above the House Judiciary Subcommittee’s chambers, in the crowded overflow room, the testimony transfixed viewers. Up here, free from the decorum, the gavel and parliamentary procedure, echoes of call and response punctuated the three-and-a-half hour hearing. When Coates argued that “if Thomas Jefferson matters, so does Sally Hemings,” shouts of “Amen!” reverberated in the room. When Congresswoman Sheila Jackson-Lee—the sponsor of the bill—declared that she didn’t pick cotton, but “those who picked cotton created the very basic wealth of this nation,” the room ushered a collective “Yes!”

Black onlookers constituted the majority in this overflow space. They wore green dashikis and Frederick Douglass–like Afros, long dreadlocks and red Howard University T-shirts, short cropped hair, and metallic “hr 40—now!” buttons. True to the spirit of Emancipation, for these supporters of reparations the day marked time of jubilee. 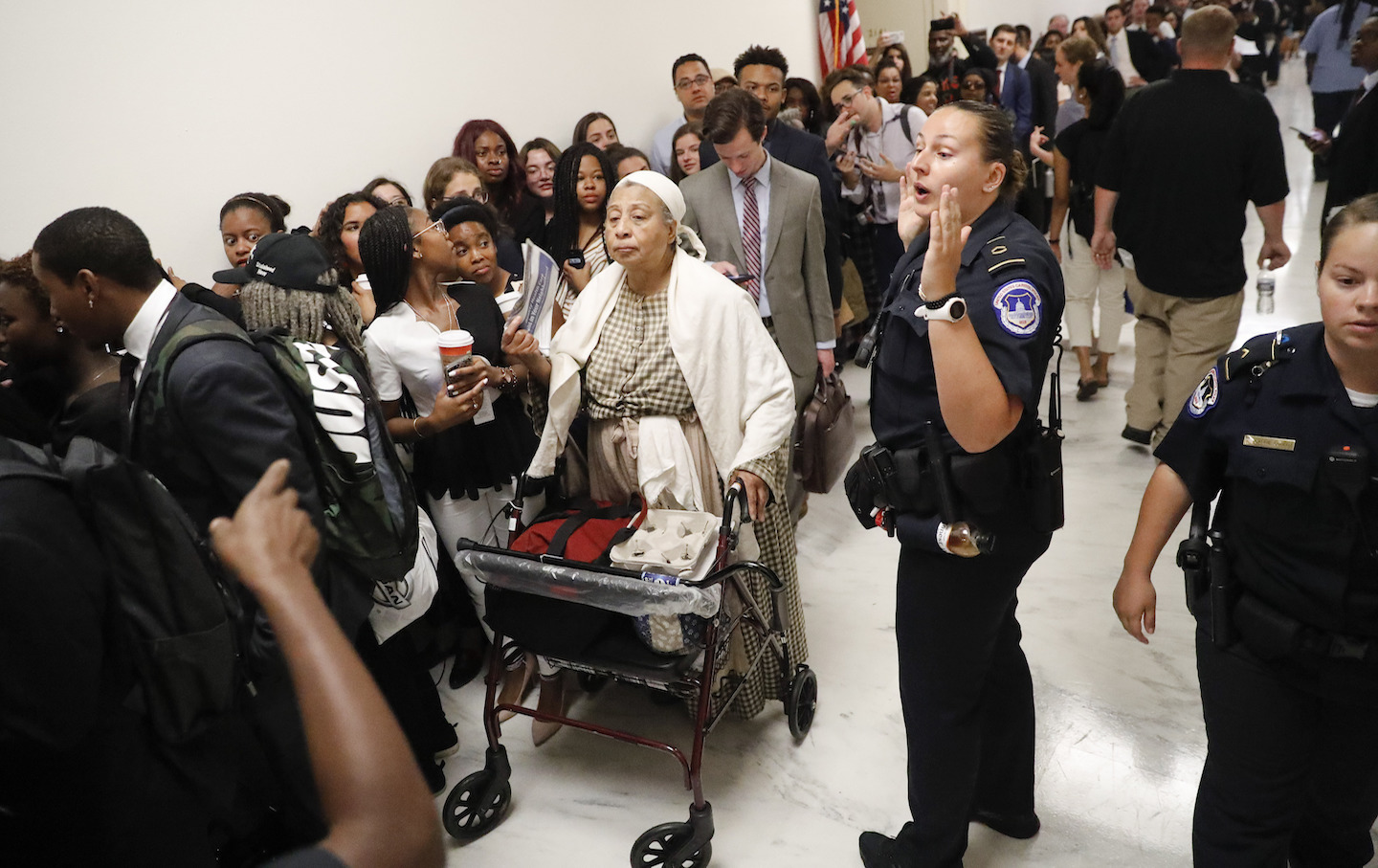 A crowd in the hallway outside the House Judiciary Subcommittee on the Constitution, Civil Rights and Civil Liberties’ reparations hearing (Photo by Pablo Martinez Monsivais / AP)

Yet, for their part, the Republicans downstairs sat intransigent. For hours, they executed a stupefying defense strategy, only addressing their personally invited black conservatives: the Columbia philosophy undergrad and columnist at the willfully contrarian magazine Quilette Coleman Hughes and former football player Burgess Owens. Anti-reparations testimony from Owens revolved around the degradation of the black family and the pathology imbued in the term “baby mama.” Hughes lobbed up obscure academic theories on the statistical insignificance of racial disparities found in 2015 Census data that political economist Julianne Malveaux spiked down, referring to young Hughes as a naive, “Kumbaya brother.” Republican House members continued to dither, wasting their time in part by professing their love for the actor and activist Danny Glover, whom Democrats had invited to testify:

Ben Cline (R-VA): I appreciate the witnesses for being here.… Mr. Glover, I am a big fan.

Louie Gohmert Jr. (R-TX): Mr. Glover, anytime I see you’re listed as being in a movie, I normally say that is one I will enjoy, and I appreciate your body of’ work throughout your career. You have provided a great deal of enjoyment, um, even in the dramas. Thank you for that.

Danny Glover: Excuse me! Let me have a word, please. Because I wear several hats, and certainly most people consider me under one hat, and know me from the hat I wear as an artist and an activist, but I worked in city government for six and a half years.

Glover, perhaps sensing the sideshow and afraid to let the moment slip by, embarked on a soliloquy, speaking over Chairman Cohen to explain his activism, political career, and the ills of American racism. He discussed the black neighborhoods splintering under the weight of gentrification and displacement, the crippling repeal of Lyndon Johnson’s Great Society programs, the ravaging effects of mass incarceration and crack cocaine: “We have to begin to tell ourselves the truth! James Baldwin, the great writer once said, ‘If we cannot tell ourselves the truth of our past, we become trapped in it,’’’ Glover concluded. “That’s what we are—trapped in it!”

Glover’s truth, Baldwin’s truth, black Americans’ truth was inescapable in the hearing room, in Rayburn, and throughout the city. It lived in the bricks that the slaves used to construct the Capitol building just across the street. It resided in red-lined black communities two miles east across the Anacostia River. It inhabited the gentrifying corridors of U street. And far beyond Washington, DC, it could be heard recited by the living survivors of American apartheid.

Black Capitalism Won’t Save Us

In Memphis, Tennessee, you can still find many of the sanitation workers with whom Martin Luther King marched and picketed. Not only were these black men forced to carry buckets of trash and waste on their heads, but they were thanked for their years of service by being denied hundreds of thousands of dollars through exclusion from the city pension plan.

In Greenwood, Tulsa, survivors of the Black Wall Street riots of 1921 still recount how white residents and police ravaged the city for three days and destroyed 35 city blocks, killed 300 people, and cost the city millions of dollars in damage.

In Birmingham, Alabama, you can find families whose fathers and grandfathers were stripped away from them and forced to work under the lash till death in state convict-leasing programs. Until 1941, the bounty of this looting made Southern states and corporations tens of millions of dollars and can be traced to the current fortunes of Coca-Cola, the Woodruff family, and Wachovia Bank.

In Chicago, Illinois, the family of Clyde Ross and the other plaintiffs against contract leasing continue to live in the shadow of red-lining and housing discrimination (a crime that experts recently estimated has cost the city’s black residents over $4 billion).

“In this country, we have never been able to come to grips with our history,” said Congresswoman Karen Bass during the hearing. “We either don’t know our history, or we deny it.” That denial animates millions of Americans—the majority of whom don’t support reparations. During the hearing, denial’s most capable avatar was Representative Mike Johnson (R) of Louisiana. Buckling under the weight of the testimony, Johnson advanced this refutation by asserting that “America is good.” As proof, he quoted Martin Luther King’s “I Have a Dream” speech, where the civil-rights leader praised the Constitution and the Declaration of Independence as “a promissory note to which every American was to fall heir.” But Johnson didn’t finish the quote. King goes on to say that “instead of honoring this sacred obligation, America has given the Negro people a bad check, a check which has come back marked ‘insufficient funds.’”

It was that King—the radical King—whose voice floated above the hearing that day. Five years after the March on Washington, in the months before his assassination, King was planning another protest march to draw attention to the ills of racialized poverty. “Now when we come to Washington in this campaign,” he told his supporters, “we are coming to get our check.” King never made it back to DC to make that claim, but on June 19, 2019, his progeny did.