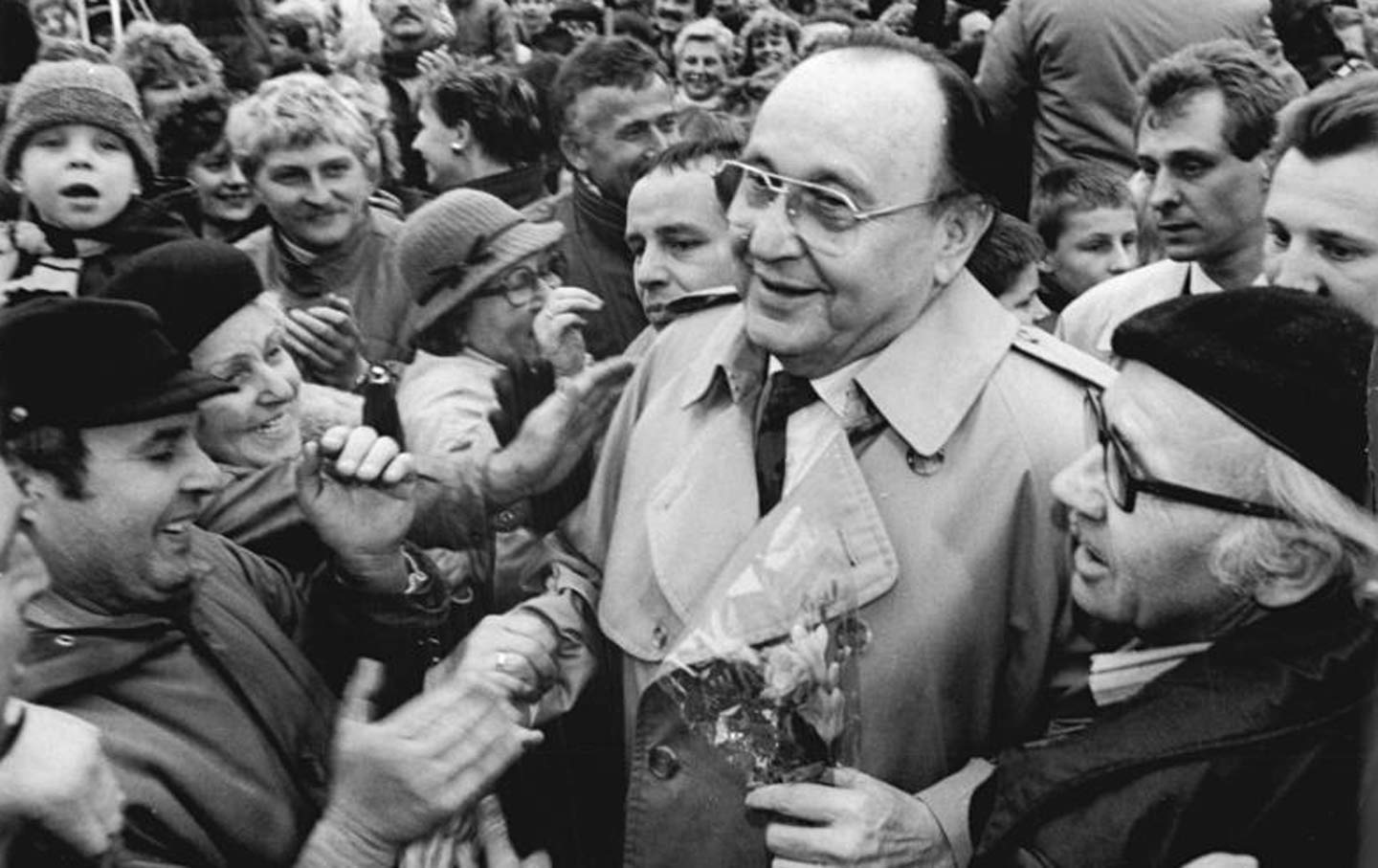 Hans-Dietrich Genscher visits eastern Germany in 1990, a year after the fall of the Berlin Wall. (Photo by Heinz Hirndorf, courtesy of Bundesarchiv, Bild)

For the just-deceased former German foreign minister Hans-Dietrich Genscher, the expression “Rest in peace” is entirely fitting. In office from 1974 until 1992, he contributed more than any Western European except Willy Brandt to the end of the Cold War. Proof of his effectiveness is the use of the term “Genscherism” by official and unofficial adversaries to typify his position, perceived as too conciliatory, toward the USSR. In fact, he infuriated conventional thinkers by describing them as irresponsible risk takers, gambling with the terrible possibility of nuclear confrontation in Europe.

Ordinary in appearance and brusque in manner, Genscher was hardly a tribune of the people. Yet his fellow Germans—in both halves of the divided nation—trusted him to act for political freedom, and for termination of the incessant threat of war. He developed an entire generation of West German diplomats utterly remote from the conformist mediocrity of their predecessors. He left Communist Germany before it was walled in, and as a prominent West German politician, he repeatedly visited family in the old university city of Halle—not far from Luther’s Wittenberg. At the height of his influence as foreign minister, in 1987, the two German states celebrated the 500th anniversary of the Reformation as an event that signified an indivisible national heritage.

Genscher’s party was the Free Democrats. Attached to the market, and supported by large and especially small business, it seemed an unlikely agency for radical approaches to peace. It did have a strong belief in civil liberties—and a pronounced option for European integration. It drew free spirits. It was also, if secularist, close to the Protestant Church, aware that the division of Germany gave West Germany a Catholic majority, while East Germany was preponderantly Protestant. Its electoral score varied around 10 percent, and it used that to magnify its influence in a system in which for decades it was indispensable to the formation of any coalition government.

From 1969 to 1974, Genscher was interior minister, and experienced two disasters that would have terminated the political life of someone less stolid. He was in command of the response to the seizure of Israeli athletes by Palestinians at the 1972 Olympics in Munich. He ordered a police action to free them, but a bloodbath ensued. Then, in 1974, he mishandled the case of the East German spy in the office of Chancellor Brandt. Brandt resigned, and Genscher took over the foreign-minister post under the new Social Democratic chancellor, Helmut Schmidt.

Genscher’s brush with political oblivion turned him into a master tactician in resolute pursuit of remote historical gains. Free Democrats and Social Democrats continued Brandt’s policy of Ostpolitik, the opening to the Communist nations and rapprochement with the Soviet Union and its German satellite. Genscher used the Helsinki Agreement of 1975 to deepen cultural, economic, and political relationships with the nations of the Soviet bloc. He also intensified West Germany’s engagement in Western Europe and outside it, in Africa, Asia, and Latin America. Henry Kissinger, secretary of state in Washington until early 1977, was aware that Schmidt and Genscher were moving toward more West German independence from the United States, but could not—perhaps would not—stop a project built of a thousand small steps. Meanwhile, the West German army had roughly 300,000 soldiers (vastly more than the American forces in Germany )on active service and a million reservists. It also had an intelligent officers corps, which could be described as post-bellicose, often grandsons and sons of those who had died in the two world wars. (I once asked a German general, a retired Central Front Commander for NATO, about his conception of a feasible German military policy. His answer: “Avoid fighting Russia.”)

In this period, dissenting and independence movements in the Soviet bloc were increasingly difficult for the aging Soviet leadership to crush. Rather, they could be contained (by martial law and the suffocation of civil society in Poland, for instance) but not eliminated. The Soviet Politburo also had a restive, educated public at home to deal with. In East Germany, the rigid Stalinists in charge often banished their opponents through the Wall to the West—from where, clearly heard in the East, they continued to demand reform.

In the midst of these tensions, in 1979, the United States and the Soviet Union each announced plans for the installation in the two German states of medium-range nuclear missiles—certain to extirpate the entire nation in case of conflict. Schmidt and Genscher agreed to station the new weapons in West Germany, planning to use the project to negotiate a wide arms-reduction agreement between NATO and the USSR. A very large number of their citizens objected, and West Germany was rapidly rent by the most serious political conflict since its foundation in 1949. In the then capital of Bonn, officials, officers, and politicians announced agreement with the government—and their children and wives (and pastors) promptly marched off to another demonstration. Schmidt was clearly not in command of his own party. Genscher and the Free Democrats decided to change sides. They joined the Christian Democrats in an alternative coalition, electing Helmut Kohl as chancellor—and with him won the election of early 1983. With the new Green Party in the Bundestag and Schmidt no longer either chancellor or leader of the Social Democrats, the conflict continued.

The missiles were put in place—but in the meantime, Genscher began a tutorial project. Kohl, who was from the Rhineland, was a Catholic and a pious adherent of West Germany’s supposedly irrevocable “commitment to the West.” Under Genscher’s instruction, he saw it as rather more open than he had imagined. His new angle of vision was greatly sharpened by the ascendancy of Mikhail Gorbachev in the Soviet Union—who brought in a new foreign minister, Eduard Shevardnadze, as replacement for the eternal nyet-sayer Andrei Gromyko. In the INF Treaty of 1987, the United States and the Soviet Union began the withdrawal of the missiles. The US apparatus had produced a plan for their “modernization,” which evoked from Genscher the dictum, “Let us modernize our ideas, not our weapons.”

Genscher’s good relations with the USSR, and his open lines of communication with the East German leadership, at the end of summer of 1989 gave him another triumph: In August, thousands of East German citizens occupied the grounds of the West German Embassy in Prague and demanded to be allowed to enter West Germany. The Czechs brought them flowers, food, and support, as their government was seized by anticipatory panic. Genscher negotiated their expatriation to West Germany, announcing it to them and the world in a visit to the embassy—and made his own contribution to what followed shortly thereafter, the disintegration of the East German regime and the opening of the Wall.

In 1990, with Germany about to be unified, Georgetown University proffered Genscher an honorary doctorate. I wrote the citation, and of course quoted his declaration on the need for new ideas. The German media promptly described that as evidence of Genscher’s reconciliation with the American elite once so suspicious of him. Actually, some US officials very discreetly approved of what he did, including Secretary of State James Baker and even, eventually, Kissinger. Public figures like McGeorge Bundy, Robert McNamara, and George Kennan openly supported him. It was not only his fellow Germans and Europeans he educated.