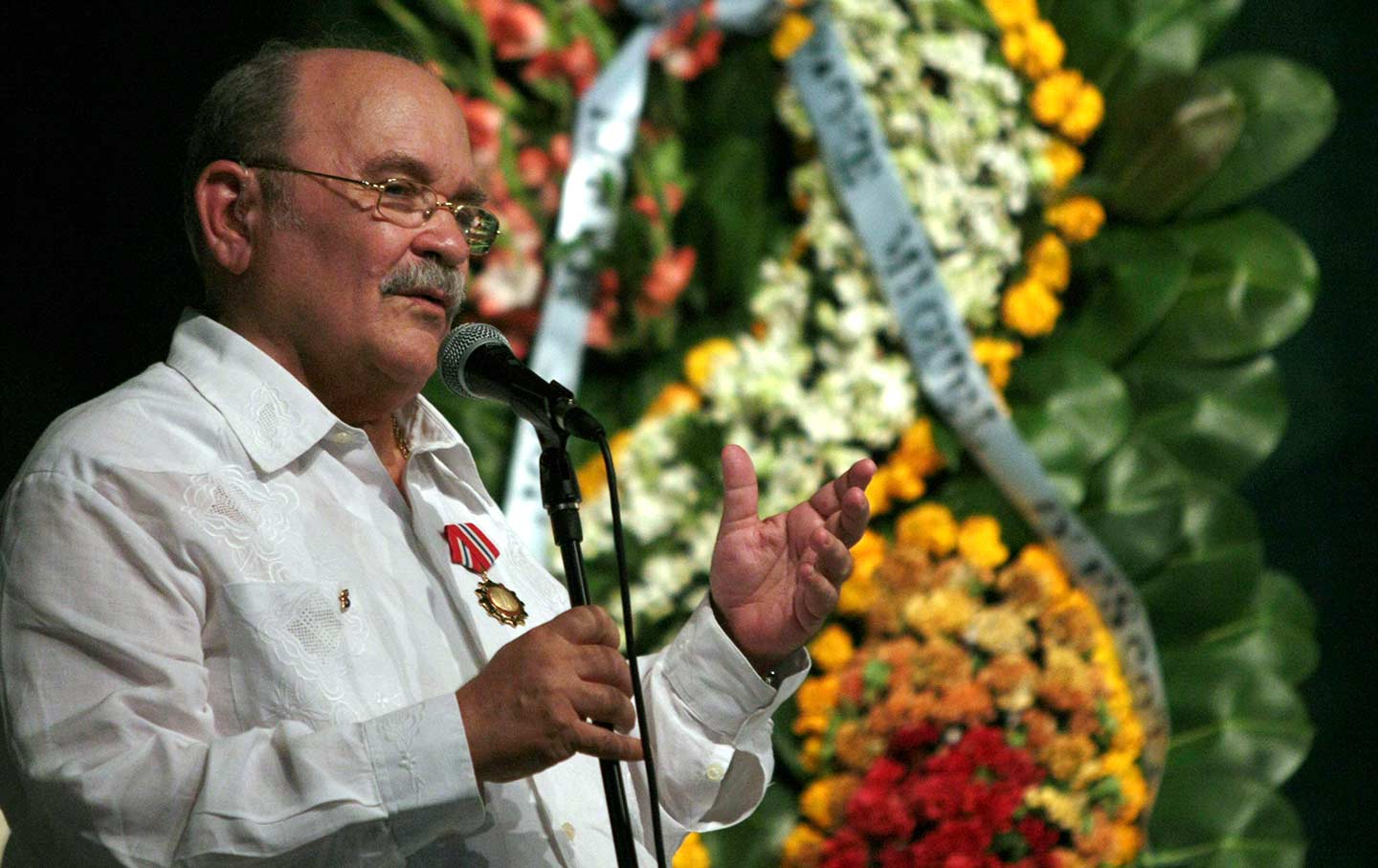 Father Miguel D’Escoto Brockmann, who died a few days ago, was a Catholic priest and former president of the UN General Assembly. The Nicaraguan diplomat was also a leading voice of conscience on Middle East peace—as well as a cherished friend, loved and admired by both of us, who became an inspirational figure to many around the world.

As much as anyone we ever encountered, Father Miguel lived as he preached. He worked and lived among the poor and struggled for years against dictatorship and injustice in his country. We want to pause not only to mourn this personal loss, but also to call attention to his public role both in his native Nicaragua and as a citizen of the world—an identity expressed most powerfully by way of his devotion to the United Nations.

A Priest and a Diplomat

A Maryknoll priest, Father Miguel became an early and impassioned practitioner of liberation theology. He later gained international fame as Nicaragua’s foreign minister in the Sandinista government during the 1980s, a period during which his small country was plagued by the notorious Contra guerrilla insurgency that had been funded, equipped, and trained by the US government.

Years later he was elected president of the UN General Assembly—just weeks before Israel’s Operation Cast Lead began in late 2008. He quickly moved to become perhaps the world’s leading spokesperson for Palestinian rights.

Richard first encountered Father Miguel in the mid-1980s, when he was preparing a historic case before the International Court of Justice against the United States for its role in aiding the Contras and otherwise committing acts of aggression, including the mining of Nicaragua’s harbors. He worked closely with Father Miguel in a New York townhouse on how to proceed at The Hague with a legal argument that might produce a level of international accountability for Washington’s flagrant violations of Nicaraguan sovereign rights under international law.

In a stirring decision reached by the World Court in 1986, the main grievances put forward by Nicaragua were upheld, and although the United States boycotted the proceedings, it ended up complying with major findings of the decision. It was not only a moral and political victory, but a vindication of Miguel’s underlying belief that international law, not violence, was the basis of peace and justice in the relations among nations.

After retiring from official life in 1991, Father Miguel was only pulled away from his religious ministry on behalf of the poor when he was elected to head the General Assembly—as an individual, not as a representative of his government.

Miguel took on that role, traditionally considered a largely ceremonial position leading a too-often marginalized organ of the UN system, and almost immediately emerged as an influential global voice who spoke powerfully in support of Palestinian rights under international law. He courageously opposed Israel’s brutal Cast Lead military operation, defying the always present geopolitical pressures mounted by Washington on behalf of Israel. In his defense of Palestine throughout those weeks of war, and in his later commitment to forcing the UN to take environmental justice seriously, he aimed to transform the General Assembly into a potent force for global justice.

He never gave up this dream, collecting his thoughts in a widely distributed booklet bearing the title Reinventing the UN: A Proposal. The subtitle was a transparent summary of the text: “How to make the UN a functional organization capable of dealing effectively with the great XXI century challenges confronting Mother Earth and humanity.”

A Voice for Gaza—and International Law

Within hours of the first airstrikes against Gaza, Father Miguel condemned Israel’s actions as “wanton aggression by a very powerful state against a territory that it illegally occupies.” He insisted it was time for the General Assembly “to take firm action if the United Nations does not want to be rightly accused of complicity by omission.”

In following days, the UN Security Council—which under the UN Charter is supposed to take primary responsibility for peace and security issues—discussed and debated and consistently failed to respond to the growing Gaza crisis, mostly because the veto-wielding United States was active in blocking action. Then–Secretary of State Condoleezza Rice, in the midst of the slaughter of Gazan civilians, famously remarked, “We don’t need a cease-fire yet.”

Some urged Miguel to wait, hoping that the Security Council would eventually act and the General Assembly could meekly fall in line. But such a cynical suggestion outraged the priest. As the airstrikes turned into a full-scale ground invasion, he called Israel’s war “a monstrosity.”

We were both working with Father Miguel during that frantic time. As the days passed without an Assembly initiative, his patience waned, and he asked for help drafting a speech to respond to the urgent moment. Afterward he convened a special session of the entire General Assembly and delivered a stirring address condemning the assault, which had already killed over 1,000 Palestinians—a third of them children. “If this onslaught in Gaza is indeed a war,” he said, “it is a war against a helpless, defenseless, imprisoned population.” The small territory “is ablaze,” he lamented. “It has been turned into a real burning hell.”

As the “unlawful” but internationally recognized occupying power of Gaza, Father Miguel explained, Israel owed Gazans protection—along with “food, water, education, freedom of religion, and more.” Instead, “Gaza’s civilians find themselves locked inside a lethal war zone behind a wall surrounding their densely populated territory.” Under assault and hemmed in by an illegal Israeli blockade, “they have no means of escape.”

In such circumstances, the priest insisted, “it becomes the responsibility of the international community as a whole, represented here in the United Nations, to provide that protection.” Yet he charged that “some of the most powerful members of the [Security] Council”—like the United States—were bent on “allowing the military action to continue” while the façade of a diplomatic process unfolded. That, not coincidentally, “matched perfectly the unambiguous goal of the occupying power.”

To that end, Father Miguel urged an uncompromising General Assembly resolution calling for both an immediate cease-fire and an end to Israel’s blockade. Remarkably, he linked those demands not only to international law, but to the international social movements that had emerged to support the same calls under it:

We must stand with the hundreds of thousands of people who have stopped the trains, petitioned their governments, poured into the streets around the world, all calling for an end to war. That is our obligation, our responsibility, our duty, as we work, mourning so many deaths, for an immediate ceasefire.

Father Miguel will be long remembered and deeply missed by friends and the many lives that he touched forever. He was not only a religious figure, but a truly spiritual presence. So many times we were told at the UN that Father Miguel was not a politician or diplomat, but something far more valuable and rare at the UN, a man of unquestionable integrity and spirituality who fearlessly spoke truth to power and rather innocently expected others to do the same.