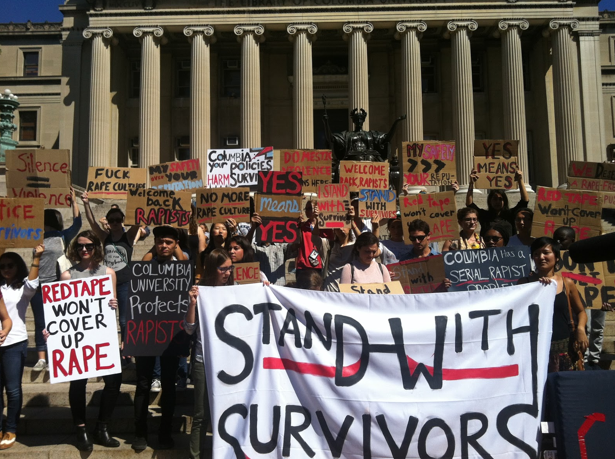 This article originally appeared at Youngist.org and is reposted here with permission.

Yesterday, in its first public rally, Columbia’s anti-rape group, No Red Tape, called on students to come out and voice their experiences of sexual violence directly in front of Low Library, the seat of Columbia’s administration.

Last year, No Red Tape made national headlines for attempting to hand out warning fliers to prospective students, organizing a 23 student Title IX complaint, and putting together a solidarity action on graduation day. But last year, a small core of students organized most of these actions—a fact that many online commentators have used to claim the anti-rape movement is getting too much attention.

The demonstration, however, left no doubt that No Red Tape’s actions had galvanized the student body. Over three hundred students, community activists, alumni, and curious journalists converged on campus, making it No Red Tape’s first campus rally, the largest in recent memory. Over 15 students lugged their dorm mattresses to the protest in solidarity with Emma Sulkowicz, a senior who has decided to carry her mattress everywhere she goes on campus as long as her alleged rapist, Paul Nungesser, is allowed to remain on campus.

“I brought my mattress to the rally yesterday because Emma (Sulkowicz) asked people to bring them to show support,” said Jen Sluka, a Columbia sophomore, “I think its important for a lot of people to bring their mattresses to show that this happens everywhere and its not just Emma’s issue, but all of ours.”

In the last year, campus sexual violence has been a much-publicized issue across the country, but has often been co-opted by lawmakers to push for increased involvement on the part of the police and the criminal justice system. So many reporters were surprised by No Red Tape’s start to the rally, a spoken-word poem denouncing the relationship between Columbia’s complicity in sexual violence and its simultaneous takeover of West Harlem and close ties to the NYPD.

Since last spring, when national media began focusing on the flood of Title IX complaints, students across the nation have fought back against these lawmakers’ policing narratives, demanding that the violence inflicted on their bodies not be exploited to strengthen institutions, designed to reproduce such violence on other people. No Red Tape has refused to go along with lawmakers’ calls for greater police involvement, instead seeking comprehensive prevention programs, calling for increased resources for survivors, and demanding that survivors no longer need to fear the continued presence of their assailants on campus.

Poet G! Pe Benito explained her piece, entitled “No Red Tape,” to Youngist, “For me, a lot of the conversation around violence tends to end with putting the police in charge of final justice,” said Pe Benito, “But we cannot be safe from racial and sexual violence as long as the police are a militarized unit that deploys racial and sexual violence right here.” She continued, “We must take great care to show that not all of us are content to remain complicit in this system of violence because we’ve come from communities, which have been inflicted with such violence.”

No Red Tape’s rally, which only had about seven speakers planned, went on for three hours, drawing words mostly from unaffiliated undergraduates, graduate students, alumni, and community members.

Jen Roesch, a former Barnard student, who had been involved in the early 90’s struggle for a Rape Crisis Center at Columbia, commented on how little has changed institutionally since her time at Columbia, pointing to the fact that the administration has refused to provide 24/7 access to the center for decades. Nonetheless, Roesch declared students had already had a huge impact on her personally, “For decades, I blamed myself for not being able to graduate from Barnard. Now I realize that was not my fault, this movement has given that back to me.”

The demonstration was at times poignant and at times angry. Over the course of three hours, many students, who had never come out about their violent experiences, chose to speak out for the first time, spurring the crowd to rage at the administration’s rape crisis cover-up.

At several points during the rally, unplanned chants broke out, exclaiming, “Fuck The Deans” and “Carry That Weight.” One survivor at the rally noted the power she felt standing with so many others at the rally, “The administration is so fucked. And I don’t know why this has to be so hard. But I know we can win this.”

No Red Tape members promised to escalate their actions, given Columbia’s refusal to work with students to overhaul the university’s rape crisis response process. At the beginning of the rally a No Red Tape member scaled Columbia’s central statue, Alma Mater, to cover it with red tape—an act of defiance that administrators immediately took down. But as the pain and anger began to pour out at the demonstration, another No Red Tape activist put the tape back up.

“I felt like I wasn’t at Columbia, the space was transformed,” said Deborah Secular, a Barnard Sophomore. Students, for that brief moment, had reclaimed their campus. Three hours later, as organizers picked up their mattresses to leave, the red tape remained.