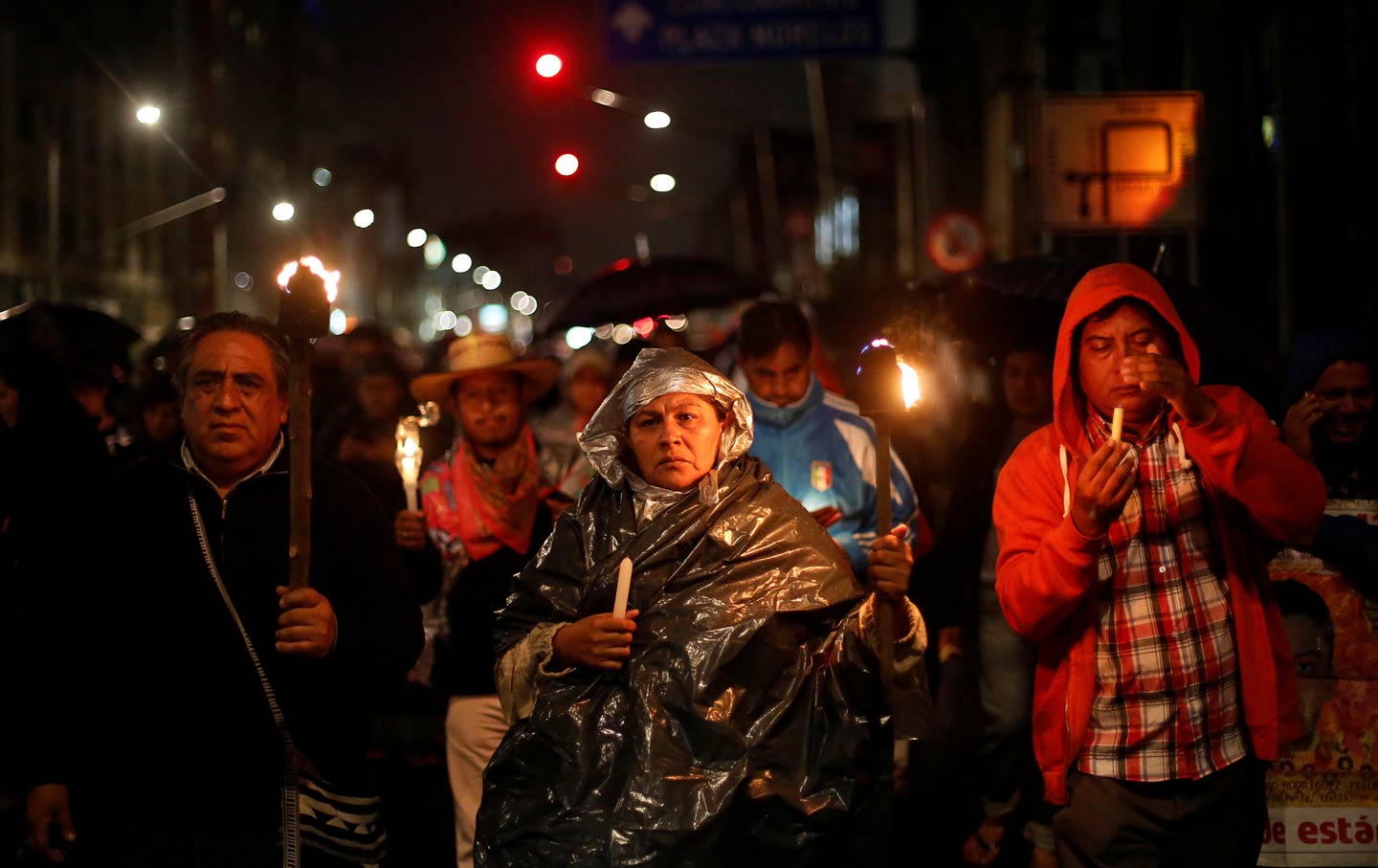 Members of the National Coordination of Education Workers (CNTE) teachers' union in Mexico carry candles during a march after a lethal police attack against CNTE protesters. (Reuters / Edgard Garrido)

Nochixtlán—Before the federal police opened fire, the church bells in this town high in the mountains of southern Mexico rang out a warning. Mariana Sosa, a 51-year-old primary school teacher, was already out that morning with other demonstrators, blocking the nearby national highway, part of a wave of protests against a government effort to impose a new education policy partly designed to weaken the teachers union.

It was Sunday, June 19, market day in this town of 18,000, with added festivities planned for Father’s Day. Sosa (her name has been changed) remembered: “Hundreds of federales started arriving in busloads. First, they fired tear gas and rubber bullets and pushed us back. The church bells alerted our people to the danger, and they came down from the market to reinforce us.”

At about 10:30, the federal police started firing live ammunition. A young man was killed right next to Sosa, shot in the head. Within hours, a total of 10 unarmed protesters were dead here, and the police had killed another man elsewhere in Oaxaca State. Overnight, the government attack on a militant union exploded into a much broader uprising that reverberated across Mexico.

If police in Venezuela had shot down 11 unarmed demonstrators, a pack of American reporters would have raced there.

Astonishingly, the US mainstream media have barely covered what everyone here calls “the massacre.” Make no mistake: If police in Venezuela had shot down 11 unarmed demonstrators, a pack of American reporters would have raced there.

Three days after the killings, tens of thousands of white-clad health workers marched in 19 of Mexico’s 31 states, both to support the teachers and to resist government plans to reorganize their sector. Thousands of others blocked major highways in southern Mexico to reinforce the protest. In Oaxaca, the state capital just over an hour to the southeast of Nochixtlán, hundreds more maintained a tent city that covered the central plaza, in a tactic reminiscent of Occupy Wall Street.

The nationwide outcry forced President Enrique Peña Nieto to pull the federal police back. So here in Nochixtlán, the striking teachers re-established their blockade of national highway 190. Over a long day of conversations, what stood out was the respectable, middle-class nature of the protesters.

At first, the teachers and their supporters were wary of outsiders. They are indignant at the government’s campaign to lie about the massacre, with the complicity of most of the regional and national media. The government insinuated that some of the blockaders that Sunday were armed “guerrillas” who had “ambushed” the “unarmed” police.

Mariana Sosa and her colleagues refuted every point of the government’s account, giving precise times and descriptions as though they were testifying in court.

“We are teachers; we don’t use arms. Our weapons are our ideas.” —Jorge Gutierrez

The teachers stress that they suffered all the casualties; in addition to the dead, more than 100 people were wounded. Jorge Gutierrez, a soft-spoken history teacher in his 40s, explained: “It was planned in advance. The police put snipers in a couple of hotels. They used heavy weapons we have never seen before. We are teachers; we don’t use arms. Our weapons are our ideas.”

They added that some of the wounded were still too afraid to come forward, even to the local hospital, for fear of eventual reprisals.

Efraín Vera, whose subjects are English and reading comprehension, explained why the public is rallying behind the teachers: “Here, the teacher is a vital figure, especially in the rural areas. You are a second father or mother, an adviser, a psychologist. Just last week I gave one of my students 20 pesos [just over $1] because I could see that he was hungry.”

“What’s more,” he added, “every family has at least one teacher among them, and they are proud of that person.”

“The government never came to listen to us.… It only came to punish us.” —teacher Efraín Vera

Vera, like the others, belongs to the now famous Section 22 of the CNTE, the National Coordination of Education Workers (for more background, see David Bacon’s recent report, “Why Are Mexican Teachers Being Jailed for Protesting Education Reform?”). He recognizes that there have been some abuses in union practices, but he is emphatic that the Mexican government’s stated concerns are not sincere. “The government never came to listen to us before imposing this so-called ‘reform,’” he said. “It only came to punish us.”

In an echo of one questionable trend in US education, the Mexican government also wants to start competency testing for teachers. Vera said, “We recognize that teachers, as public employees, should be evaluated. But then so should our president.” He gave a sly smile. President Peña Nieto’s lack of intelligence is notorious in Mexico, the subject of a steady stream of jokes and comic skits.

Adriana Marcelina Linares, the outspoken leader of a local parents’ organization, was not afraid to use her real name. “One more stripe on this tiger is not going to matter,” she said, laughing. Linares was hard at work in resistance headquarters, an elementary school in the center of town. Classrooms have become impromptu offices; volunteer lawyers were meeting with survivors and families of the dead, and an open-air communal kitchen prepared food. Hand-lettered posters were everywhere. The atmosphere was business-like and determined.

Linares expressed a common view here, that racism and prejudice partly explain why the national government felt it could open fire with impunity. This is a poor, indigenous area, in which more than half the people speak the Mixteca language. There is a feeling that the lighter-skinned rulers in Mexico City regard the people of Oaxaca and other southern states as colonial subjects. The federal police, who are from elsewhere in Mexico, are seen as an invading army.

“As indigenous people, we have the right to be taken into account.” —parents’ leader Adriana Marcelina Linares

Linares said simply: “As indigenous people, we have the right to be taken into account. And we think it is better for the federal government to simply leave.”

In Mexico, coverage of the massacre is ludicrously biased. Press and television continue to float slanders against the teachers and their supporters, while running alarmist reports about the shortages the highway blockades are alleged to be causing.

To counter, people here use Facebook, which some simply abbreviate to “Face.” Santiago Navarro, in his mid-30s, is part of an alternative news site called Avispa (Wasp), which publishes its own reports online. He points out that there is only a single trustworthy radio station, which the government has jammed in the past. “They quickly license a new, more powerful station to broadcast at nearly the same frequency, to drown us out,” he said.

For now, the Mexican government has backed down slightly, and opened negotiations with the teachers. Oaxaca City is a major tourist destination, and the State Department has already issued a travel warning to US-government employees due to the unrest. Mariana Sosa noted bitterly, “You should start talking before you fire murderous bullets, not after.”

She says Nochixtlán, and Mexico in general, are at the beginning of a long struggle. “Our watchword is, ‘We will not pardon or forget,’” she said. “Until many years from now, when the last person who witnessed this massacre has died, we will keep the memory alive.”

Correction: This article has been updated to reflect the fact that the State Department travel warning was issued to US government employees only.