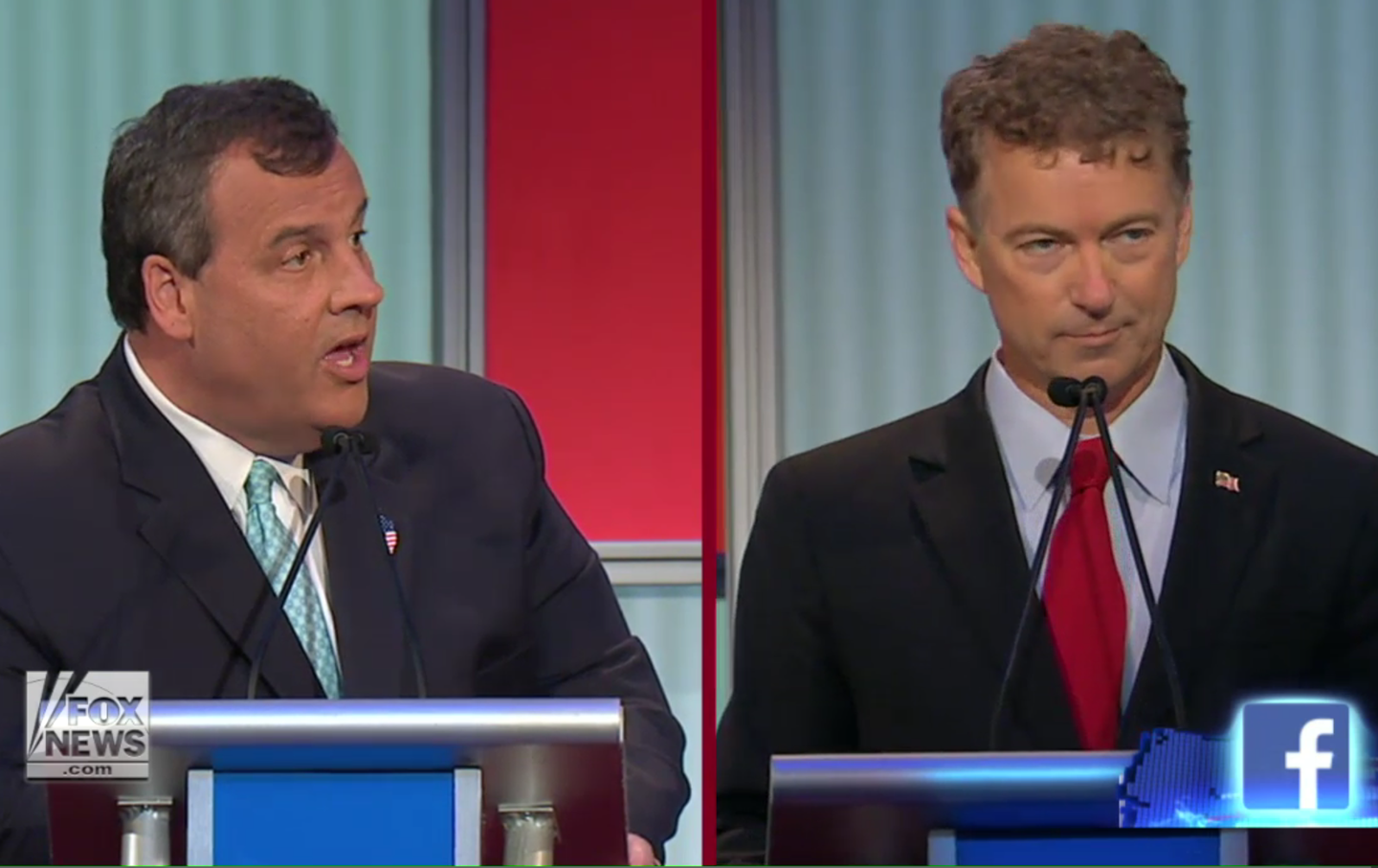 Rand Paul reacts to a comment from Chris Christie at the GOP debates on Thursday, August 6, 2015. (Fox News)

Republicans didn’t bother to hold their 2004 nominating convention in some far-flung purple state where every county was going to count that November. The Bush-Cheney campaign, which started running advertisements featuring a charred World Trade Center literally one day after the president announced his re-election bid, had a much more potent idea. The RNC happened only three miles from Ground Zero, at Madison Square Garden. Dick Cheney thundered from the stage that “if the killers of September 11 thought we had lost the will to defend our freedom, they did not know America and they did not know George W. Bush.”

Fast forward twelve years to Thursday’s Republican presidential debate, the first of the 2016 campaign. Chris Christie was eager to capitalize on his experience as a U.S. Attorney in New Jersey following the attacks, delivering a saccharine line about how “the hugs that I remember are the hugs that I gave to the families who lost their people on September 11th.”

Senator Rand Paul, at that moment engaged with Christie on a debate about mass surveillance, then gave what we’ll unilaterally dub as the most monumental eyeroll in presidential debate history:

Paul’s smirking get-a-load-of-this-guy dismissal of Christie’s ghoulish grandstanding is a nice final line for an important political chapter—-it’s the moment we knew for sure September 11 lost its currency in Republican politics. Paul wasn’t immediately booed, nor shredded by the moderators, nor condemned as a terrorist sympathizer or worse, as certainly would have been the case during the Bush years. In fact, in the Drudge Report’s insta-reaction online poll, Paul finished fifth and Christie was dead last.

The eye-roll moment was a long time coming. It was foreshadowed in 2008 by the spectacular failure of Rudy Giuliani’s “Noun, Verb, 9/11” presidential campaign and John McCain’s subsequent failure to use his support for the surge in Iraq as a ticket to the White House. In 2010 and 2012 the wars in Iraq and Afghanistan were barely mentioned during national elections as concerns over the economy took center stage.

And Thursday night proved that September 11 has finally been stripped of its potency as an animating event for Republican voters. The two biggest “Wait, who are they?” candidates in the 5 p.m. debate were George Pataki and Jim Gilmore, united only in irrelevance and the fact both were governors of states that were attacked on September 11. Like low-rent Hollywood producers trying to remake a franchise everyone’s already sick of, Pataki and Gilmore gamely tried to highlight that experience as a rationale for their candidacies. Few (if any) Republican voters appear to be impressed.

The reasons for this transformation are pretty obvious: the joyless overuse of September 11 as a rallying cry by opportunistic politicians, and more importantly the disastrous overuse of the attacks as a rationale for bad foreign policy. The 150,000 American troops that were fanned out across Iraq when Cheney spoke at MSG, ostensibly as a response to September 11, have since withdrawn—-those that were lucky—-and many of them harbor grievous physical or mental injuries. ISIS has taken over much of the region and is more dangerous than anything we initially hoped to combat.

Losing this terror trump card has created a (slightly) more serious foreign policy debate among Republicans. Paul scored some strong factual points on Christie during that exchange; when Christie advocated hoovering up all U.S. phone data because “how are you supposed to know” who is a terrorist and who isn’t, Paul rejoined with the obvious answer that warrants guaranteed by the Fourth Amendment are a pretty good way of discerning who ought to be targeted.

Paul may not win the nomination, but his arguments reflect a growing segment of the Republican base, eye-rolls and all. After the debate, Sean Hannity—-who once wondered whether the country should “even be debating the Patriot Act and NSA wiretapping” during a 2006 interview with Cheney—-confronted Christie. “The original Patriot Act was never supposed to data mine American citizens. Only if they were connected to outside countries, people, and again, it went through the warrants,” Hannity informed him during a live interview.

And while Republicans are still surely hawkish on foreign policy, the presidential candidates either don’t advocate putting troops back into the Middle East or do so cautiously and infrequently. (The exception is Senator Lindsey Graham, who was also relegated to the kids-table debate and polls in the low-single digits.)

This change happened gradually, and is of course subject to change very quickly. But if you’re looking for an official end to a particular and dark chapter in American politics, it happened Thursday night in Cleveland.