“I’m just, like, trying to be good,” says Ramy to the elderly Hajj at the end of the first episode of Ramy, the semiautobiographical Hulu series created by and starring comedian Ramy Youssef. It’s a statement of principle born out of a contemporary first-generation immigrant perspective, one steeped in the tension between the life of a millennial American and the religious strictures of Islam. Ramy embraces his Muslim identity and openly believes in God, but his actions don’t always live up to his moral ideals. He doesn’t abide by all the rules—Ramy frequently engages in premarital sex, for example—but judges others, including his fellow Muslims, for their lapses with drinking and drugs. He’s spiritually lost, and yet he’s too in his own head to live a righteous life. Case in point: Hajj responds to Ramy’s monologue with a joke that also critiques his navel-gazing: “You jerk off too much.”1

Ramy broadly fits within the tradition of introspective half-hour comedy-dramas created by comics that have flourished this past decade. It’s executive-produced by Jerrod Carmichael and Bridget Bedard, two people who worked on identity-focused shows (The Carmichael Show and Transparent, respectively) that foreground political and cultural diversity. Most of Ramy’s episodes broadly tackle different topics—love, drugs, Ramadan, 9/11—in a way that resembles Master of None. Its primary visual referent seems to be Atlanta. Yet Ramy’s religious dimension sets it apart from its pedigree. The self-interrogation, cringe comedy, and millennial satire are all filtered through the lens of a practicing Muslim living in suburban New Jersey. The supporting ensemble of standard archetypes—concerned parents, a frustrated younger sister, the dopey friends with bad advice—sport interior lives rooted in the teachings of Islam. The conflict in Ramy isn’t about keeping the faith but about the difficulty of living faithfully in the modern world.2 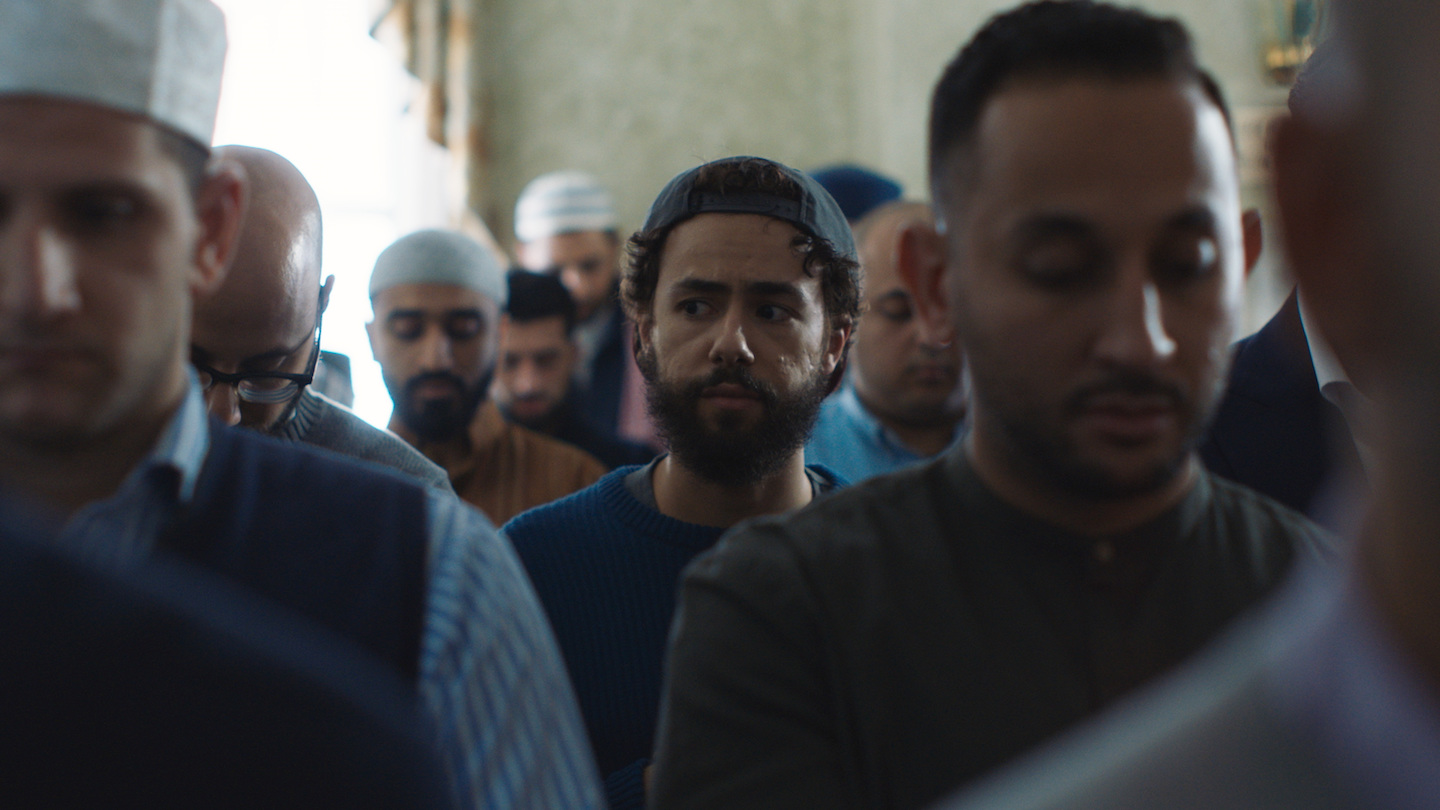 Thankfully, Ramy doesn’t function as a PSA for Muslims, and it’s actively uninterested in painting saintly portraits of its subjects. Ramy’s sincere spiritual journey belies his egotism. He frequently overcompensates for his moral slips by performatively committing to his heritage while insisting he can be a good Muslim without following every rule. His fractured relationship with his religious identity causes him to pass judgment on others and even cross universal ethical boundaries, like sleeping with a married woman (Poorna Jagannathan) who attends his mosque. Meanwhile, Ramy’s parents, though generally sensitive and understanding, frequently exhibit generational ignorance regarding other cultures. The series’ second episode features Ramy’s uncle Naseem (Laith Nakli), a virulent anti-Semite and misogynist who casually spews bilious conspiracy theories about 9/11 and Princess Diana’s death. Ramy never tries to rehabilitate or justify Naseem’s worldview, even though it includes a scene in which he helps stop a violent domestic dispute; it just illustrates that people like him exist in the orbit of otherwise reasonable people. Representation isn’t a zero-sum game. The worst selves deserve to be seen as well.3

Ramy’s commitment to showcasing intercultural and ideological distinctions peaks in its standout fourth episode, “Strawberries,” which follows a young Ramy (Elisha Henig) struggling with puberty and his Arab identity in the wake of September 11. It ends with a dream sequence that features Osama bin Laden (Christopher Tramantana) squaring off against Ramy over a plate of strawberries. Bin Laden uses the strawberries as a metaphor for US imperialism (Egypt owes money to “men in suits,” thus it turned its wheat fields into strawberry fields, and now Egyptians have no bread so Americans can eat strawberries in December) in order to get Ramy to agree with his radicalism. Though sharing in bin Laden’s alienation, Ramy expresses his horror at the use of mass violence to restore the global balance of equality. Ramy sympathizes with anti-American resentment and understands the roots of radicalization but still condemns the resulting terrorism from those valid emotions. Relative to the rest of television, it’s a remarkable feat of nuanced moral clarity.4

Still, Ramy’s identity analysis works best when it’s treated matter-of-factly and not as an avenue for commentary—the wide spectrum of hijab use (worn always, worn never, worn only in front of men, worn only at services, etc.), a blink-and-you’ll-miss-it hate crime against a Muslim-owned diner during Ramadan that actually improves its business, an undercover FBI agent patrolling a mosque who’s easily spotted by Ramy’s friend. But these moments are few and far between because Ramy’s primary mode of explanation is more didactic. Its episodes labor to unpack complex ideas at length instead of baking them into the show itself, as if there’s anxiety about whether it will be fully understood.5

It’s understandable that the series is monologue-heavy, given Youssef’s stand-up origins, but Ramy subsequently suffers from a major “show, don’t tell” problem. Emotions are illustrated through speechifying instead of action. It’s not enough to have Ramy lovingly clean a mosque as a way to cleanse his soul. It has to be preceded by a scene in which he explicates his guilt about using drugs to a white mosque adviser (Michael Chernus), who, in turn, explains to him that it’s about the goodness in his heart rather than good and bad deeds.6

When Ramy embarks on a spiritual expedition to Cairo at the end of the season, he meets a variety of young Egyptians who party to outrun their leftover trauma from the 2011 revolution. As if the reasons for their hedonism weren’t obvious, Ramy all but describes this through a speech delivered by his cousin Shadi (Shadi Alfons), who only wanted to show his American friend a good time. He chastises Ramy for making his friends uncomfortable by bringing up the revolution and for Ramy’s misplaced spiritual idealism—i.e., that simply being in Egypt would provide him with solace—all of which were easily perceptible in the episode. A life-altering prayer circle that Ramy attends can’t just coast on its spiritual energy; it has to be briefly dissected by Ramy and his crush and cousin (Rosaline Elbay) so that its power of “giving in” can be clearly communicated. Ramy’s commendable efforts to normalize Muslim beliefs and feelings are ultimately hindered by its lack of trust in viewers to comprehend them without a guiding hand.7 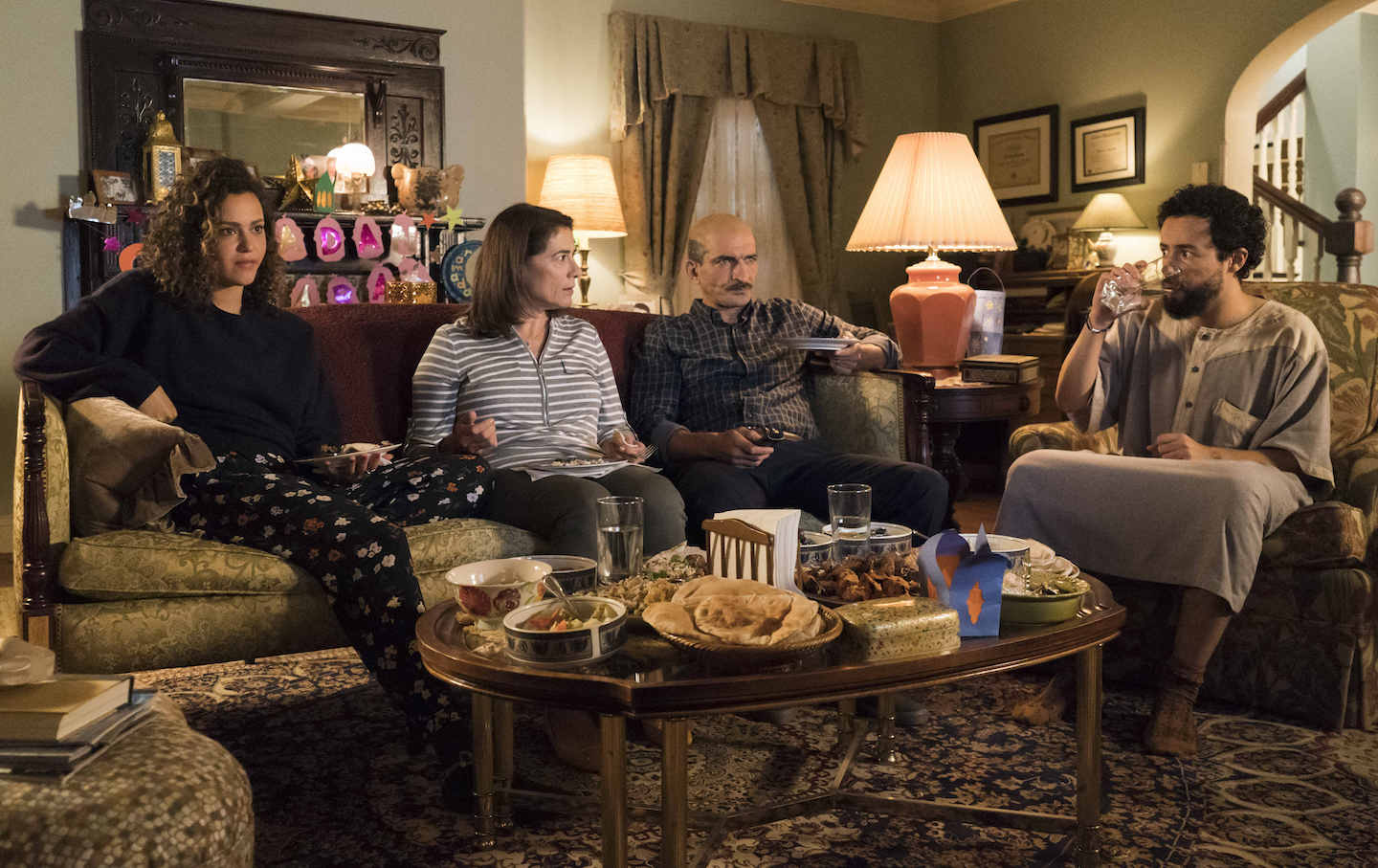 Similarly, Ramy’s narrow identity focus has its pitfalls when it expands beyond its protagonist’s perspective. The series’ sixth and seventh episodes explore the interiority of Ramy’s sister, Dena (May Calamawy), and mother, Maysa (Hiam Abbass), respectively, chronicling their plight in the face of a patriarchal Muslim culture that polices their sexuality and devalues their personal needs. In Dena’s case, her parents’ overprotectiveness, which stands in sharp contrast to their laissez-faire attitude toward Ramy, has hindered her romantic relationships as well as her personal growth. For Maysa, her status as a mother and housewife has left her unfulfilled as an independent woman. Both episodes follow the two women as they navigate the myriad hazards of being—and being seen as—a Muslim woman within and outside their culture.8

Neither episode is bad, and they feature stellar performances from Calamawy and Abbass, but they nevertheless spotlight Ramy’s shortcomings: A hyper-specific POV inevitably limits other avenues of exploration. In The Atlantic, writer Shamira Ibrahim examines Ramy’s flawed depiction of Muslim women at length by illustrating how the series’ female characters are largely defined by their respective albatrosses, whether it be marriage or social expectations. “Muslim women are indeed varied and complicated,” she explains, “but portraying them as largely absent of agency, or somehow wholly separate from the temptations or crises that Ramy himself navigates, excludes them from the modern millennial existence in a way that rings false.” It’s not that Ramy portrays each woman the same way or that they aren’t afforded personalities or jokes, but their limited characterization stands out in relation to the more nuanced male characters. Who are these women outside the double standards that they’re forced to navigate? It’s obviously valid for Islam to define and shape these characters’ identities, but it’s frustrating that Ramy can’t depict them beyond, outside, or even adjacent to their relationship to religion.9

Ramy doesn’t falter because of its specific worldview but because Youssef crafts his characters and their world in such a circumscribed way. The characters, despite their personal liberation, feel boxed. We know who these people are only through a narrow lens; their worldviews and personalities are illustrated through either their culture or how others perceive their culture. That’s not an invalid creative choice, but it can feel dramatically repetitive and limiting. Worse, these characters often feel unknowable, as if they are a Muslim spin on stock types. Even Ramy feels too much like a cipher. His bone-deep compassion, his sexual desires, his ethical dilemmas are all so tied to his faith that he unintentionally becomes a millennial avatar for Islam, which is mildly ironic, considering how hard Ramy tries to capture varied types of Muslims.10

Of course, Ramy never once suggests that its title character represents the religion, but its inability to imagine him in any other context still feels like a missed opportunity. Identity is inherently multidimensional; we are our faith and our race and our heritage, but we are also our preferences, our personalities, and even our defects. They’re all intertwined, and yet Ramy puts only the same foot forward.