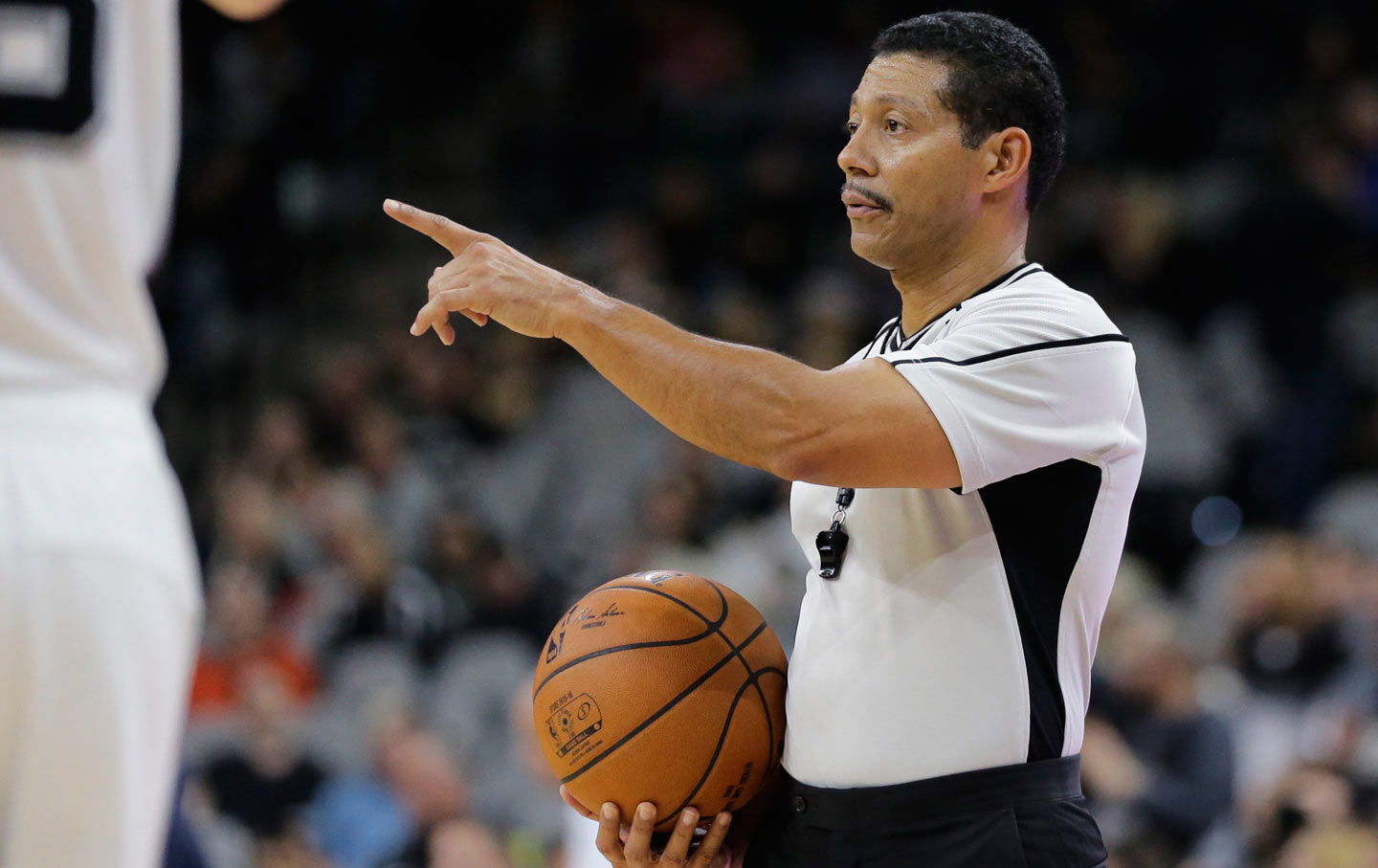 NBA referee Bill Kennedy during the second half of an NBA basketball game between the San Antonio Spurs and Utah Jazz, December 14, 2015, in San Antonio. (AP Photo / Eric Gay)

On December 3 in Mexico City, a hate crime took place on an NBA court. Sacramento Kings point guard Rajon Rondo, according to a meticulously documented referree’s report, “aggressively pursued referee Bill Kennedy and had to be restrained by teammates and escorted off the floor by Sacramento team security.” While being “restrained,” Rondo said to Kennedy, “You’re a mother——-—faggot.… You’re a f———faggot, Billy.”

Slurs like these are unacceptable in every environment, and, given its reach and power, should be monitored particularly sharply in the world of sports.

Yet in this case, it was even worse: Rondo was going after a referee who was widely known in NBA circles to be gay.

Here is where the story, however, takes a turn from the vile to the inspiring. Instead of doing what most referees do in all situations—keeping a low profile no matter how hot the spotlight—Kennedy decided to go public with his sexuality. Speaking to Yahoo! Sports, Kennedy said, “I am proud to be an NBA referee and I am proud to be a gay man. I am following in the footsteps of others who have self-identified in the hopes that will send a message to young men and women in sports that you must allow no one to make you feel ashamed of who you are.”

Following his statement, Rondo—already serving a one-game suspension—issued not one but two separate apologies.

NBA Commissioner Adam Silver also said, “I wholeheartedly support Bill’s decision to live his life proudly and openly. Throughout his 18-year career with the league, Bill has excelled as a referee because of his passion, dedication, and courage. Those qualities will continue to serve him well both as a game official and as a positive influence for others. While our league has made great progress, our work continues to ensure that everyone is treated with respect and dignity.”

In addition, Silver said he would have issued a suspension greater than just the paltry one-game punishment but was concerned that, if he brought the hammer down, he could have effectively been “outing” Kennedy.

A lot of people are not buying what Silver is selling, thinking instead that the NBA was concerned about the public fallout of an actual instance of gay-bashing taking place on an NBA court. As Cyd Zeigler, co-founder of Outsports.com and author of the forthcoming book, Fair Play: How LGBT Athletes Are Claiming Their Rightful Place in Sports, said to me, “The most disappointing and telling part of this entire episode is that the commissioner of the NBA would rather sweep the issue under the rug than deal with it publicly. He could have called Kennedy and worked with him to make this a powerful moment of education and visibility. Instead, Silver treated it with fear and secrecy. The message that sends to gay players in his league is far more damaging than what Rondo did.”

I agree with Cyd that Silver mishandled this. The only reason we know what happened in Mexico City was because of, as ESPN’s Bob Ley put it, “shoe-leather reporting” by Yahoo! Sports. The league chose to keep it quiet, give a one-game penalty and hope no one would notice. I also agree with Cyd that it is is a false dichotomy to think that Silver’s choices were just “outing” Bill Kennedy or going for the cover-up. Yet I would also add that Silver’s inaction and his excuses for that inaction are a part of what makes an ugly story something that could be seen as historic and even hopeful—and in these dark times, the need for hope is profound.

Kennedy was attacked and, instead of turtling, went public. By going public, he pushed Silver to speak out and defend a meager suspension in very progressive as well as sensitive terms (even if they are complete ass-covering horse-pucky).

The situation also pushed Spurs coach Gregg Popovich to again be a voice of principle in the world of sports, when he said Kennedy’s disclosure “showed a lot of courage.”

When asked if he was surprised that Rondo would use these slurs, he said, “Why would I be surprised? You see it all the time. It’s unfortunate. It’s disgusting. Bill is a great guy. He’s been a class act, on and off the court. And as far as anybody’s sexual orientation, it’s nobody’s business. It just shows ignorance to act in a derogatory way toward anybody in the LBGT community.… [It] just doesn’t make sense. But surprised? Of course not.”

This is also very important. Silver wants to project the league as being progressive on these issues. But there is a difference between public relations and progress. What Coach Pop said is the equivalent of whistle-blowing, of making sure people know that sports—so long a refuge of homophobia—still has miles to go.

Instead of a story about a hate crime, it’s a story about the heroism of one 49-year-old man refusing to be bullied and one Hall of Fame coach refusing to play the PR mythology that sports is an arena of continual progress. That’s the kind of courage that actually changes sports on a molecular level, not merely in the sphere of media spin. Bill Kennedy has true grit. Not just Rondo, but Adam Silver too, could learn something from it.